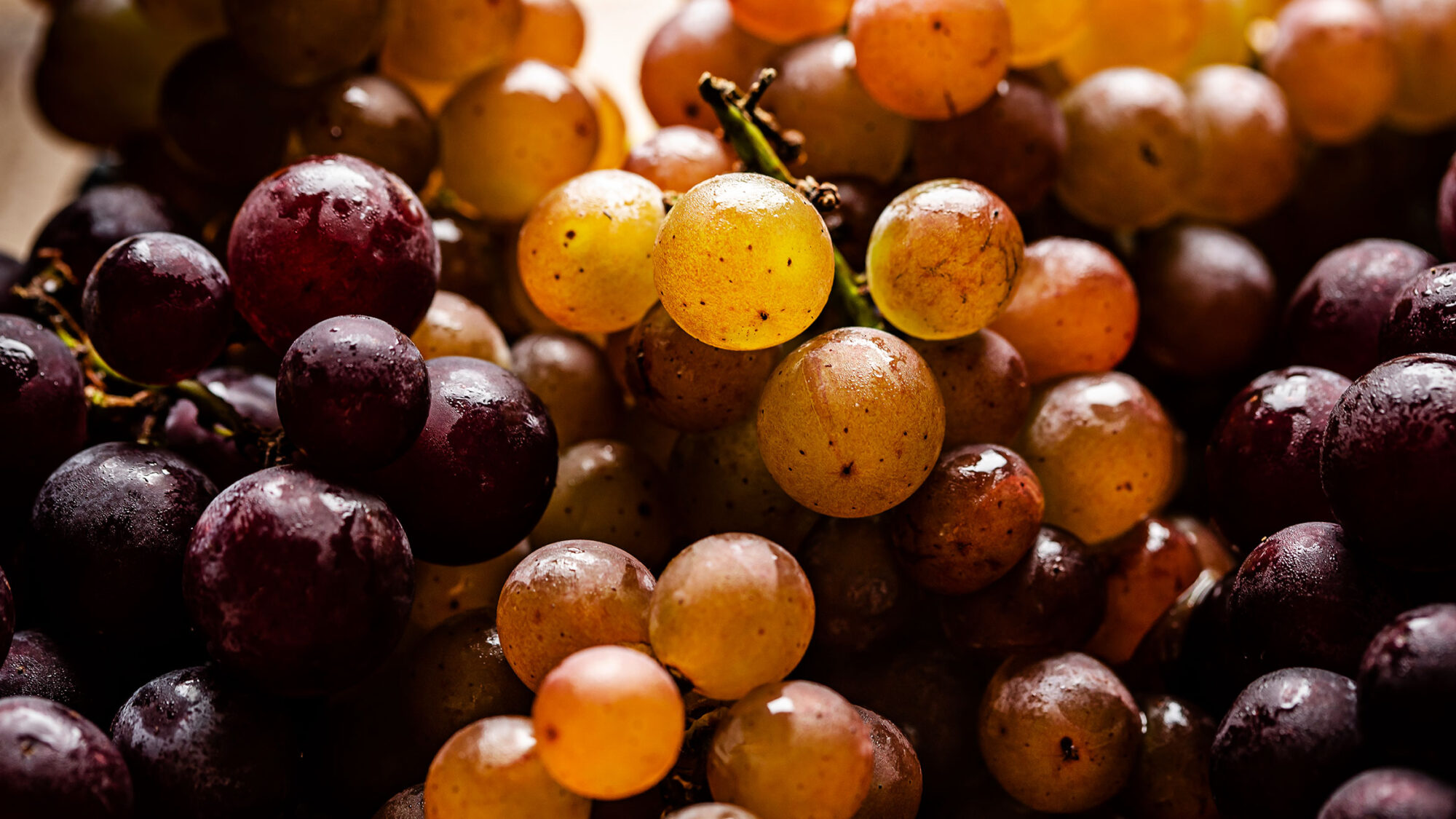 The seasonal selection of Niagaras, Lakemonts, and Jupiters go far beyond the “reds” and “greens” of the grocery store.

Among observers of seasonal shifts in farmers’ markets, there are those who wait with anticipation for spring ramps and rhubarb or summer heirloom tomatoes and peaches. But for my money, the most exciting season is fall. It is then that local grapes arrive—if you’re lucky.

Growing up in Western Massachusetts, we could pick the tastiest mottled green grapes from the few old vines in our yard, but there were no such varieties in any markets. Grapes were like so much else in the produce aisle of the American supermarket—a year-round staple reliably kept in supply. They’re so unremarkable that we only know the grapes by their colors: red, green, and black. But when I started going to the Buzzard Crest Vineyards stand at the Grand Army Plaza Greenmarket in Brooklyn years ago, I discovered there were varieties beyond that, ones with more complex flavors: green Niagaras and Lakemonts, reddish Mars, purplish Jupiter, and Concords, of course.

While shopping at the farmers’ market rather than the supermarket can often feel like a show of solidarity—I doubt that I could tell the difference between onions or kale or zucchini from either place in a blind test—local grapes taste like a different thing entirely. I never saw a bunch of grapes on the cheese plate become a conversation starter at dinner parties, like a really good recipe, until I started putting these out. People take notice.

It wasn’t difficult to guess why these excellent specimens were so rare. These grapes were immensely delicate and soft, susceptible to smooshing in my bag while walking home. The more complex flavors and their relative scarcity is a package deal. Eileen Farnan of Buzzard Crest Vineyards in Barrington, New York, part of the Finger Lakes region, says they pick their grapes when they are ripe and that the sugars are anywhere from 17 to 25 Brix (the unit measure of fruit sucrose content). Supermarket varieties, she says, are only 7 or 8 Brix—they need to be sturdier in order to withstand commercial handling, and they’re picked before they are as ripe. But she thinks there’s something else at work, too. “Our flavors are intense compared to anything you get in the western part of the country,” says Farnan. “We kind of think it’s because they have to fight to live here.”

Northeastern grapes are a rarity in the market, even in the Northeast. Today, the average American eats eight pounds of grapes per year, and 99 percent of those, according to the California Table Grape Commission, come from the San Joaquin and Coachella valleys in California, which has its season from May to January, with Chile and Mexico picking up the baton in other months. In 2019, the California table grape crop was 106 million boxes, shipped around the country and the world at a value of $2.14 billion.

In the spring, there are the large green and oval Sugraones and the red and round Flame Seedless, and by summer, Sheegene 21 and Sugrathirtyfive (both greens) and Scarlet Royal and IFG-68-175 (both reds) arrive, while black grapes are less available, with the Autumn Royal’s season extending only from August through January.

Grapes, which are botanically berries, were one of America’s indigenous foods, growing so abundantly in North America that when Leif Erikson arrived around 1000 AD, the Vikings dubbed it “vineland.” Native species, which are typically disease resistant and cold-hardy, were often musky, leading settlers to refer to them as “fox grapes.” They were also low in sugar and high in acid—poor qualities for making wine, as some colonists quickly discovered—and when they tried to import European varieties for wine-making, those were killed off by an insect pest, phylloxera. Breeders soon started cultivating sweeter, lower-acid varieties that could withstand local conditions.

There were Concords, attributed to horticulturalist Ephraim Wales Bull of Concord, Massachusetts, with its now-classic grapey flavor and slipskin, which won first place in the 1853 Boston Horticultural Society exhibition. They caught the notice of temperance devotee Dr. Thomas Bramwell Welch, who launched Dr. Welch’s Unfermented Wine in 1869 as an alternative to sacramental wine.

But it was perhaps Scottish immigrant William Thompson who made one of the most game-changing contributions to the market: commercial seedless grapes. In California, Thompson started grafting Sultana Bianca grapes, seedless Asian cuttings from a Rochester, New York, nursery, until he produced sweet, thin-skinned, and seedless grapes in 1875 for raisins. They were originally too small to be sold as table grapes, but innovations in viticulture, like removing a ring of bark around the trunk and spraying the vine with the plant growth hormone gibberellic acid, led to the plant producing larger berries. It wasn’t until the 1950s and ’60s that American grocery stores started selling seedless red and black grapes, bred by UC Davis professor of viticulture Harold Olmo.

Today, breeders are continuing to innovate within the supermarket grape industry. “We’re trying to develop new varieties or cultivars that are cheaper and easier to grow and less demanding on the grower and the environment,” says Craig Ledbetter, a research geneticist at the USDA’s San Joaquin Valley Agricultural Sciences Center. Breeders are looking for cultivars that are high in sugar and low in acid, that produce large berries, and that are uniformly colored, but that also meet the needs of the market. As opposed to early-season grapes, which go almost directly to market, late-season grapes, for example, arrive when cold storage is already filled. They have to sit in cold storage longer, which means they need a thicker skin so that they can hold up under those conditions. Cultivars get more competition or are replaced altogether.

One of Ledbetter’s favorite grapes, the early-season white grape Perlette, which has a “very thin skin and delicate muscat flavor,” was long replaced because it’s difficult to produce as a large-berried grape. The Crimson Seedless, which Ledbetter’s predecessor, David Ramming, developed, once dominated the market as a late-season red, and while it’s still considered the standard, it has more competition. But most supermarket shoppers wouldn’t have noticed that. Unlike apples, which are now sorted between Honeycrisps and Empires or Granny Smiths and Mutsus, grapes are kept generic. “There might be a dozen different apples in a good store,” says Ledbetter. “We don’t have that [with grapes]. It could be the fact that there are 80 varieties, and that’s a lot of different permanent stickers.”

Farnan thinks one of the secrets to a good grape is somewhat similar to what makes bone-in rib eye so tasty. “The ones with seeds have much more flavor.”

In the spring, there are the large green and oval Sugraones and the red and round Flame Seedless, and by summer, Sheegene 21 and Sugrathirtyfive (both greens) and Scarlet Royal and IFG-68-175 (both reds) arrive, while black grapes are less available, with the Autumn Royal’s season extending only from August through January. With the subtlest of differences between various reds and greens, and varieties both overlapping and giving way to others month by month, it’s in the market’s interest to label them all under color rather than cultivar. What all of the 15 most popular varieties named by the California Table Grape Commission have in common is that they are seedless grapes, which make up about 90 percent of the market.

“The average American thinks that that’s the only way you eat grapes—seedless,” Farnan tells me. She found out the hard way. As a grape farmer, she had once sold most of her harvest to the family-run Taylor Wine, but once the family sold to a corporate entity, they started buying less and less, and that’s when Farnan and her husband, Ken, started selling at New York City’s Greenmarket in 1986. From the start, the customers there asked for seedless—not exactly an easy fix, given that it takes at least five or six years for the organic vineyard to establish productive new vines.

Almost 35 years later, the seedless varieties are the top-selling ones, but Farnan thinks one of the secrets to a good grape is somewhat similar to what makes bone-in rib eye so tasty. “The ones with seeds have much more flavor,” she says. Like many foods, the trade-off between convenience and flavor can be pronounced. But unlike bones, you can just swallow the seeds, instead of awkwardly depositing them into a napkin with each bite.

That’s something of the way with small-farm grapes. They’re pretty far from a convenience food. The Jupiters often give the Farnans trouble, not even producing enough to sell in some seasons. When I asked Farnan why they even bother with these wayward children, she told me that giving up on grapes was a physical as well as a mental challenge. “They are our children,” she says of the nurture and care that a small farm puts into its vines, both new and old. “Some of the vines on this farm, the Concords, are over a hundred years old. And you think about what those vines have seen.”