Get a free recipe
Subscribe
In Goa, the Coconut Doesn’t Come in Cans
By: Nik Sharma 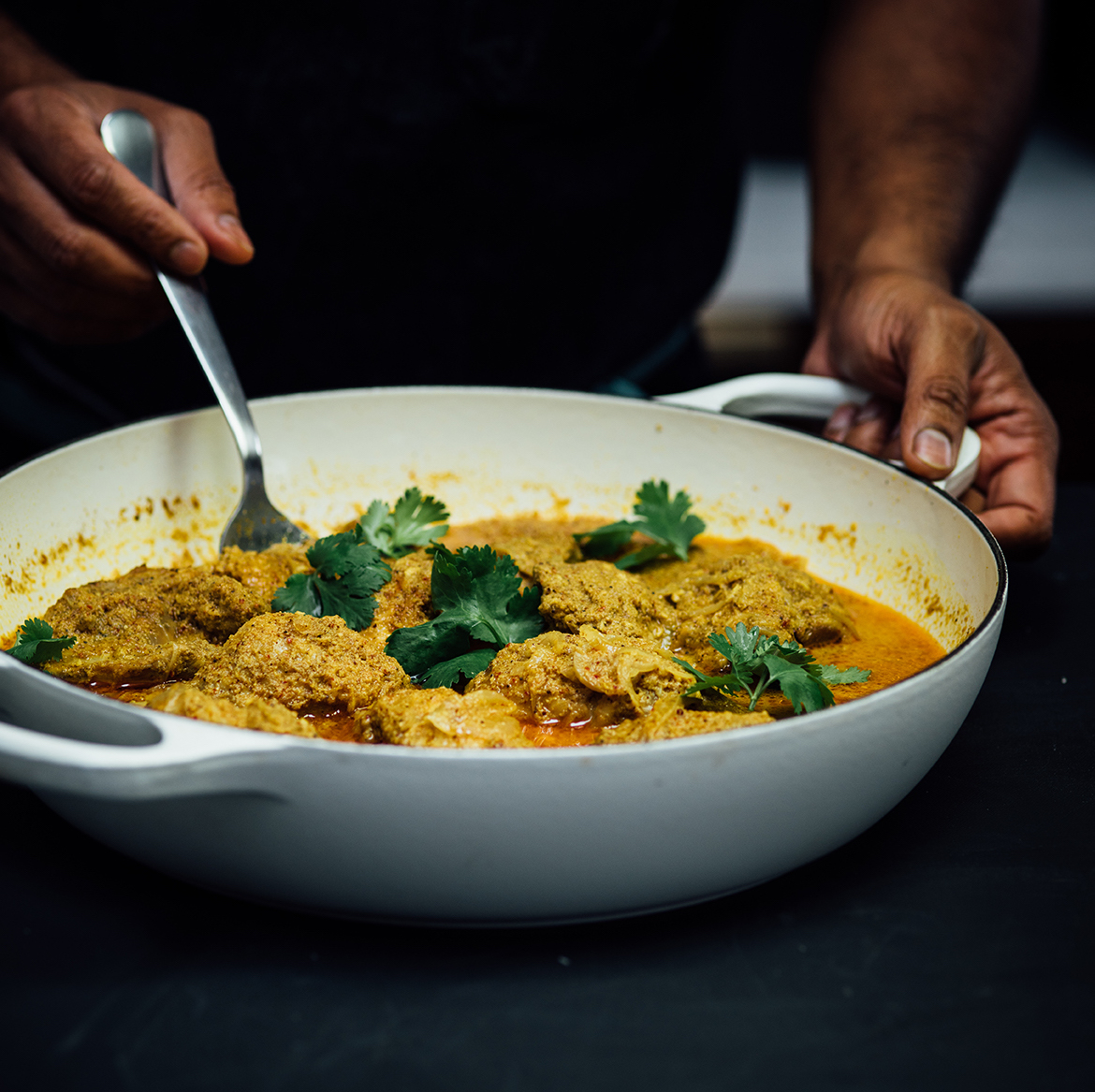 In this Portuguese-influenced state of India, abundant, ubiquitous fresh coconuts are transformed into vinegars, milks, crepes, and stews.

As kids, traveling to our ancestral home in Goa, my cousins and I looked forward to a handful of things the most, like sinking our teeth into the ripe and sweet fleshy mangoes, the hot and spicy deep red Goa sausages seasoned with sun-dried red chiles that were thrown into perhaps every conceivable item on the menu, and of course, the warm and sunny beaches lined with tall coconut trees.

Goa is a coastal state located on the west coast of India a few hours south of Mumbai. Though Goa was ruled by different dynasties over the centuries, it was the Portuguese rule and its unique influence that it is perhaps best known for. The Portuguese acquired Goa in the 15th century, and because of its prime location for trade, Goa became the center of Portuguese India. Because the Portuguese rule in Goa lasted much longer than that of the British in India (Goa achieved liberation in 1961), Goa’s people and culture were strongly influenced and shaped by the Portuguese. The Portuguese brought a wide variety of new ingredients and cooking techniques to the land, including chiles like the bird’s-eye pepper (used to make Goan piri piri, a hot sauce that flavors poultry and seafood), the button chile (a tiny dried red chile used to make a Goan version of a Portuguese roast chicken called assado), the Aldona chile (a dried red chile that’s used to add heat to meat stews and curries), and many more that quickly replaced black pepper. Unlike some parts of India, here you’ll notice people cooking and eating beef and pork in several dishes, such as ground beef patties or spicy pork vindaloo and sorpotel stews.

Because Goa is a coastal state, seafood forms a huge part of the diet. Deep cuts are made into the pomfret (a type of fish) and stuffed with a ground mixture of chiles and spices before being fried on a hot skillet. Coconuts grow in abundance all over Goa, making it a very popular ingredient in Goan cuisine. The sap of the plant is used to prepare coconut vinegar, or vinagre, as well as feni, a type of alcohol—both of which are obtained through fermentation and used extensively in Goan cuisine.

When it comes to using the coconut flesh in cooking, younger coconuts are tender and sweet and typically consumed raw (you’ll see carts loaded with coconuts, which vendors will slice the tops off of with their sharp knives and then stick a straw into the fruit before they hand it over to you to drink the sweet water inside the shell). As coconuts age, the flesh starts to get more fibrous and firm and the water content starts to reduce; it is these older coconuts that are used in cooking both sweet and savory preparations. The flesh is grated and used fresh or dried in the sun to increase its shelf life. My grandmother would use use the grated flesh to prepare rich and thick stews such as the xacuti or sweeten it a little and use it as a filling for crepes that she would serve us on Shrove Tuesday every year. Coconut milk was prepared by adding hot water to the grated flesh and then extracting it, but this strained liquid was usually used in sweet preparations, such as baath cake. The oil is used to cook with as well as a seasoning agent because of its rich nutty perfume. Although coconut oil is a saturated fat, most people in Goa consume a large amount of fish that contain essential fatty acids, which counteracts the potentially negative health of effects of a diet rich in coconut fat.

Over the years, as more Americans have explored and become familiar with Asian cooking, coconut milk has become a popular ingredient in Western kitchens, and it has also found a spot in many homes as a substitute for dairy products for people with dietary issues. The most popular form is the canned variety—many containing added emulsifiers and thickeners—but preparing coconut milk from coconut isn’t that hard.

You can make your own by adding hot water to either freshly grated or dried coconut and then pulsing it in a blender for a couple of seconds. This liquid can then be strained through a layer of cheesecloth to extract the milk. I like to keep a couple of bags of frozen fresh grated coconut in my freezer, using them as needed. Just like dairy-based milk, coconut milk can also “curdle” on high heat, especially in the presence of acids such as lemon juice or vinegar, so typically gentler cooking methods work well—cooking at lower temperatures for longer periods of time or adding the acid once the dish is fully cooked, as is done with some coconut-milk-based Thai curries where the stew is gently simmered over low heat.

I learned most of my Goan cooking from my grandmother and mother. Since canned coconut milk came much later and there really isn’t much of a need for it in India, most coconut stews and curries start out using the grated flesh. Xacuti (pronounced “shak-ooti”) is one such stew that my family would prepare often—it showed up at our dinner table every week. My grandmother Lucy would start by using either grated fresh coconut or using some that she had previously dried on her windowsill in the sun. She would then toast the coconut with spices and grind it to form a smooth paste that was used to create a perfumed, creamy sauce in which the meat was cooked to tenderness.

This year, I’ll be heading back to Goa with my family. My grandparents have long since passed away, but I know when I sit down to eat chicken xacuti in Goa, it will bring back memories of those summers so long ago and those moments when I watched my grandmother grind coconut in the blender in her kitchen, and I’ll give thanks for those experiences that shaped me as a cook.

What makes this dish unique from other coconut-milk-based stews is the toasting of the coconut before it gets blended with the spices, a step that helps to amplify the flavor. Water is finally added at the final stage to help draw out the milk, which is then thickened in part by heat as well as the flesh of the toasted grated coconut. This stew is typically served hot over a bed of plain rice and a light salad on the side.