Get a free recipe
Subscribe
Give Nopales the Milanesa Treatment
By: Christian Reynoso Photos: Emily Ferretti 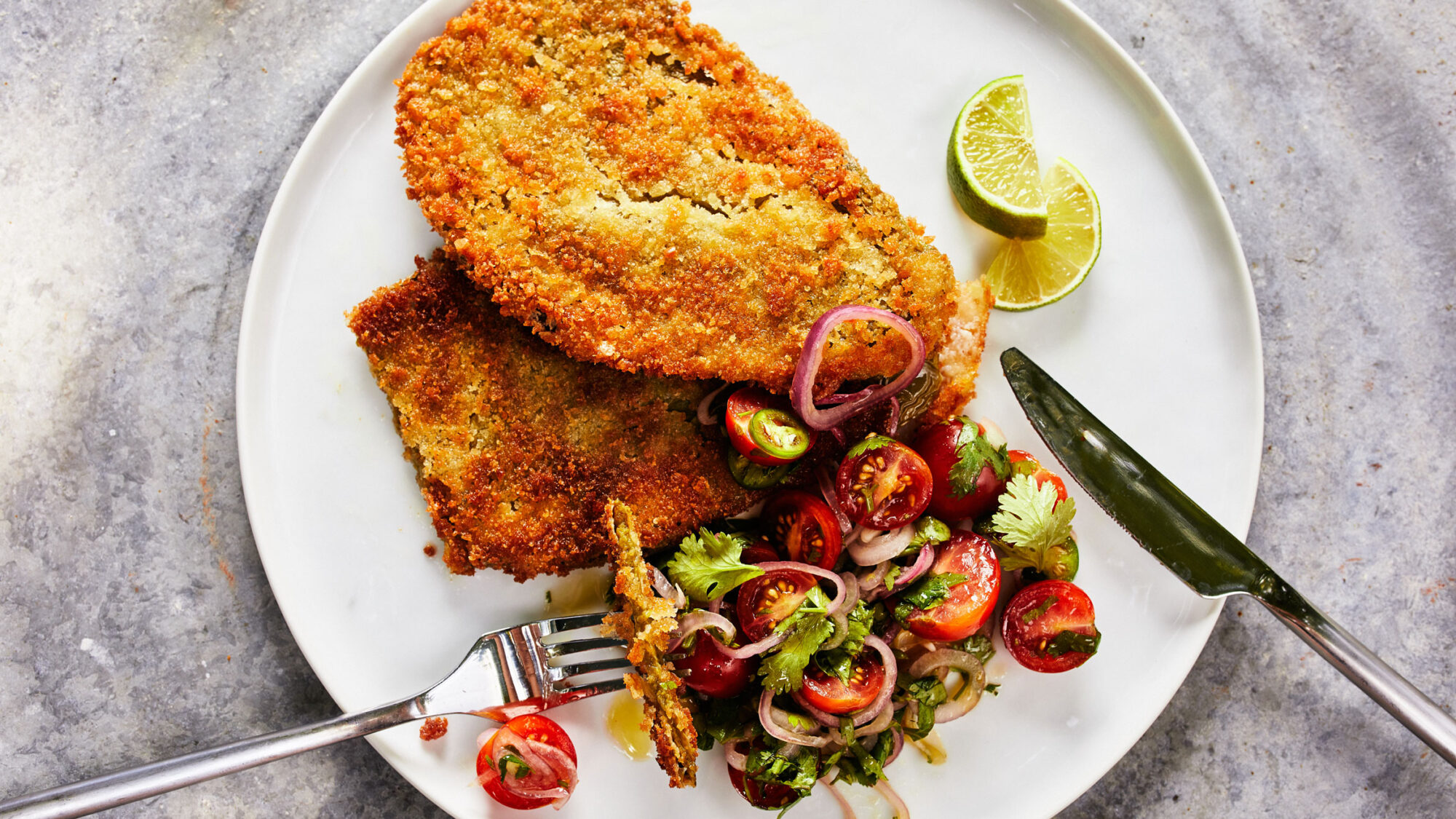 After a quick salt cure, these cactus paddles are ready to bread and fry.

A few years ago, in an attempt to get a little bit closer to my heritage and its cuisine, I planned a visit to the kitchen of Contramar, the famed Mexico City restaurant known for cooking sustainable seafood caught in Mexican waters in an ever popular “urban beach club” setting. Unexpectedly, after a day spent working in the restaurant’s kitchen, one of my most revelatory takeaways was a new method for preparing a vegetable I had eaten countless times: the nopal.

Nopales (plural) are the edible paddles of the prickly pear cactus. Harvested young, they are meaty, thorny, and widely used in Mexican cuisine. To me, they taste like green beans or asparagus with a hint of citrus. They’re found growing wild all over Mexico: along highways, in the corners of backyards, cultivated on farms, and even as a foundational element of the Mexican flag. In California, where I live, they also grow wild, springing up in places like Buena Vista Park in San Francisco and along Interstate 5, the freeway connecting Northern and Southern California. Some farms, like Riven Rock, exclusively grow organic nopales that are distributed to restaurants and grocery stores. Besides the thorns, which are easy to dispatch using a flat surface, a paring knife, and some quick, gentle scraping motions, nopales have another hidden element that makes them intimidating to first-timers: la baba. Translating to “drool” in English, la baba is a viscous, slightly slimy liquid that drains from the cactus as soon as you cut into it. Some instructions tell you to boil the paddles in order to draw out the liquid, but this tends to dull the fresh flavors of the vegetable. This is why one particular salt-curing method I learned at Contramar was such a revelation.

Even though it’s not a traditional method, chef Gabriela Cámara told me recently that her kitchen tends to use this trick any time they serve the nopal fresh, in order to maintain its snappy texture and bright flavor. In the case of their ensalada de nopal, the thinly sliced nopales are crunchy, acidic, and devoid of la baba. “They taste somewhat like sea beans to me,” says Cámara. The simplest way to salt-cure is to dredge the whole paddles in enough salt that they’re covered with a light blanket (like a fresh snow fall), but not enough to bury them. They can cure for as short as an hour or as long as overnight. The longer they cure, more of la baba will come out, resulting in a saltier cactus paddle. The texture will become softer as well. After curing, they need to be cold rinsed thoroughly, but not so vigorously that the flavor washes away.

If you’re serving the paddles raw, you can also cure them in a saltwater bath—a gentler, more even approach. After the bath, you can halt the curing process by transferring the nopal to an ice water bath. This also ensures an electric green hue and a snappy texture, perfect for a traditional salad with onion, cilantro, and queso fresco.

Nopales don’t always need to be salt-cured, and the texture of la baba doesn’t always have to be a downside. The raw, uncured paddles can be pureed with pineapple in a smoothie. When stewed in a soup with purslane, la baba becomes diluted and adds its own flavor. When grilling nopales, Cámara says she doesn’t salt-cure but instead makes long shallow slits so that la baba cooks off. I like to bread and fry the paddles, milanesa-style, and top them with some crumbled queso fresco or cherry tomato salsa. Dredging the nopales in salt and curing them beforehand seasons them like you might with a chicken cutlet or beef milanesa, but it also makes sure they cook more evenly. If the paddle is not salt-cured, some of la baba releases during the cooking process and creates steam, causing oil to splatter and leaving you with an unevenly fried paddle. In Mexico, sometimes two paddles are lightly dried first and sandwiched with Oaxaca cheese before panfrying. I like it a little simpler, and I find the panfrying adds enough richness to balance the delicate, citrus flavors of the cactus.

A few weeks ago, at an outdoor café in the Mission District of San Francisco, I noticed a family at a nearby table staring behind me at a decorative nopal cactus. The grandmother asked the server if she could slice off some new paddles to take home and cook. I told her about my love of salt-curing and frying the nopales. She told me that she grew up in a small town in Jalisco near Guadalajara; that she liked to salt the nopales overnight, rinse them the next day, and serve them as a salad with sautéed shrimp and chiles. Even if the salt trick wasn’t a restaurant kitchen innovation after all, I was glad to hear that I was in good company.