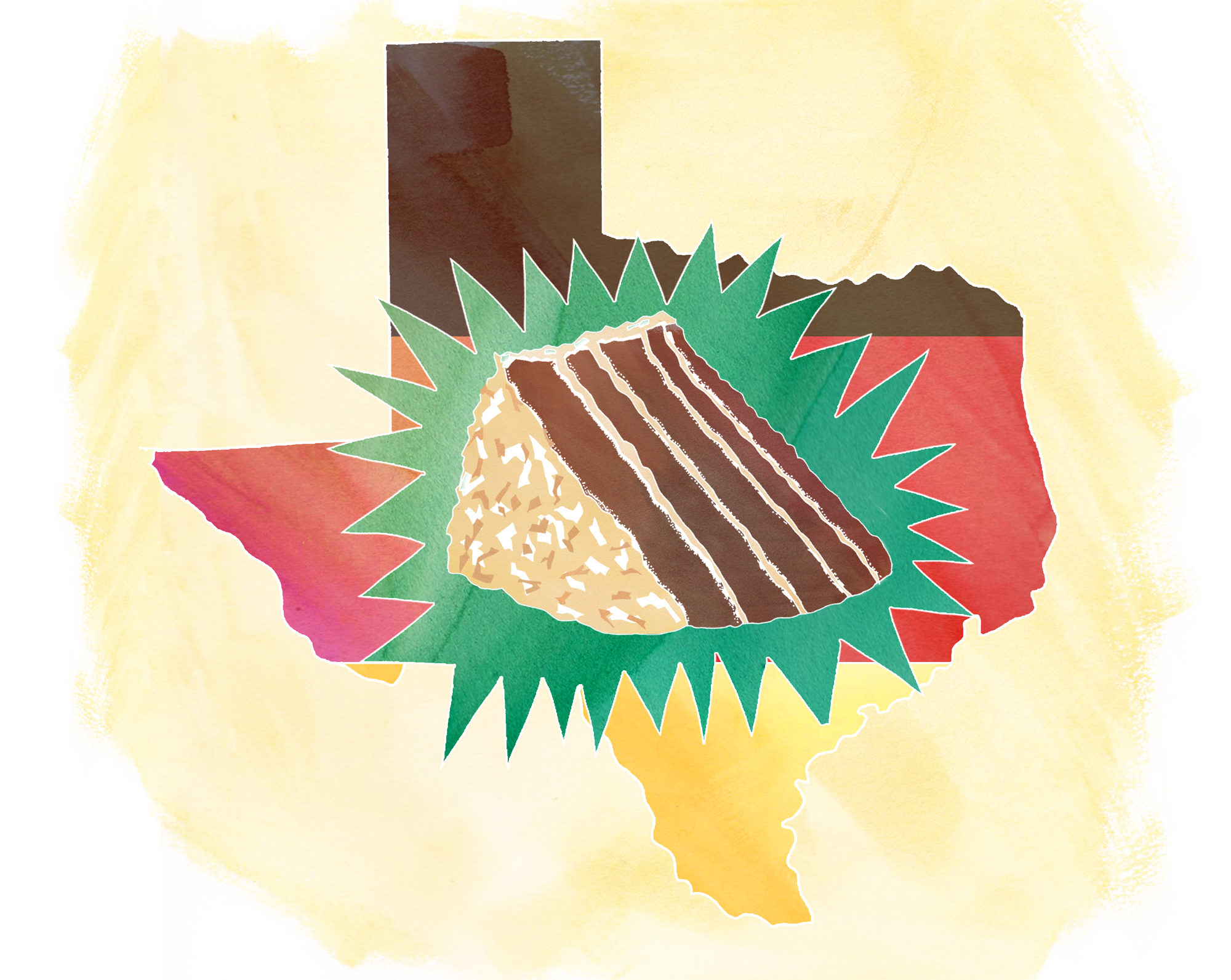 To find the origin of German chocolate cake, try looking deep in the heart of Texas.

The first thing to know about German chocolate cake is that it’s not actually German.

Shaggy, gooey, and candy bar-like, it can claim an improbable, cult-like following among pastry lovers, myself included. But nothing about its components—the light, mellow chocolate crumb; the crunchy, chewy coconut pecan frosting; the decadent layers—fits within any part of the German culinary canon. It is as far a cry from a spritzgebäck, stollen, or even the populist chocolate-and-cherry Black Forest cake as a Funfetti cake, or a Boston cream pie.

In fact, I recently discovered that my all-time favorite cake traces its lineage to none other than my hometown of Dallas, Texas.

There are, it turns out, two kinds of Germans, and German chocolate cake owes its name not to the Teutonic nation but to a chocolate company. Baker’s Chocolate was one of the first American baking-chocolate brands, founded by an entrepreneurial lawyer turned chocolatier named Walter Baker in the mid-18th century. Around 1852, a man named Samuel German—Baker’s coachman, who became a chocolate mill worker—developed a new type of chocolate that was higher in sugar (so that cooks wouldn’t have to add additional sugar to their cake recipes) and darker, which meant it was lower in cocoa butter. Baker purchased the recipe from German for a mere $1,000 and started marketing the chocolate as Baker’s German Sweet Chocolate. In ads, it was sold as “palatable, nutritious, healthful; a great favorite for children.”

The first published recipe for German chocolate cake—a mild, slightly sweet chocolate base dressed in coconut-pecan frosting—appeared in the May 10, 1956, edition of a local Dallas paper, The Irving News Record, where it was listed as “Summer German Chocolate cake.” A woman named Daisy Pearce submitted the recipe, which the paper deemed “wonderful and unusual.” The editor, the article continued, “sampled a generous serving with a stein of cold lemonade, and we will heartily endorse its texture and flavor.”

It’s likely, however, that the cake was being made well before this article was published. According to a November 12, 1997, Dallas Morning News story, a St. Louis homemaker reported in a 1959 General Foods Co. newsletter that she was given a similar recipe in the 1920s but couldn’t bake it at the time because she couldn’t afford the ingredients during the Depression. The 1950s, however, saw “an enormous resurgence in interest in home baking,” says Nick Malgieri. “The country was finally getting back to normal after World War II, so cake culture exploded.” He should know: He’s a pastry chef and the founder of the baking program at New York’s Institute of Culinary Education. The cake was an amalgam of sweets trends that were popular in midcentury America. Coconut and pecan were common in desserts like Lane cake, a white cake with a bourbon, coconut, pecan, and raisin filling that rose to fame after it was mentioned in To Kill a Mockingbird. Also, according to Stella Parks, the author of the cookbook Bravetart, the Irving News Record recipe also had a base similar to a devil’s food cake, which became prevalent in the early 20th century.

After the Irving News Record story appeared, the German chocolate cake recipe was quickly reprinted in papers across Texas and presented as one of the Texas State Fair’s signature confections. A version of the recipe submitted by one “Mrs. George Clay of 3831 Academy Drive” appeared in the June 3, 1957, edition of The Dallas Morning News, in the paper’s Recipe of the Day column. No one I spoke to at the Morning News could provide any additional details on Mrs. Clay’s identity or background, but from then on, according to that 1997 Morning News article, “everywhere the recipe was published, food editors were swamped with requests for information on where to buy the chocolate. In a year, sales jumped 73 percent. Readers who missed the recipe asked that it be reprinted.”

It’s important to remember that in the pre-Internet days, the number of recipes in circulation was very small, Malgieri says. “So when something was good, it circulated like crazy.” Both chocolate cakes and layer cakes had only recently started appearing in cookbooks (the latter thanks to the invention of leaveners like baking soda) in the early 20th century, so the cake was novel and exciting—but also rooted in familiar flavors. The Dallas Morning News recipe ended up in a recipe booklet produced by Baker’s Chocolate and eventually on the back of the boxes of German Sweet Chocolate, where it can still be found today.

“It was a cake born of marketing,” says Jessica Reed, a cake historian and the author of The Baker’s Appendix. It certainly wasn’t the only one: Chiffon cake, Reed adds, was invented by an insurance salesman named Harry Baker but eventually sold to General Mills to be used in General Mills press materials, while Tunnel of Fudge cake was originally marketed by Pillsbury to sell more Bundt pans. (It worked: Sales skyrocketed.)

When people started to believe that German chocolate cake had actual German origins, it became a selling point. “We as a country were having this love affair with novelty and faux exoticism,” Parks explains. Around the same time, you could also find recipes for “Japanese” fruitcake and “Swedish” pancakes. “These cakes would not be true to their supposed origins,” Parks says, “but it helped to distinguish the recipe and to make it seem more appealing.”

The cake was an amalgam of sweets trends that were popular in midcentury America.

Although many of these cakes have since fallen out of fashion, German chocolate has remained a staple of many American bakeries. In Boston, for example, you can find it at Blackbird Doughnuts; in New York, versions of it are available at Milk Bar, the Grill (the restaurant’s elegant, pattern-like version alternates layers of dark chocolate cake, coconut-pecan-frosting, and chocolate ganache in each slice), and Amy’s Bread, where founder Amy Scherber reports that the cake is still a best-seller. When Parks served the cake at Lexington, Kentucky’s now-shuttered Table Three Ten, where she used to be the pastry chef, “people would just go crazy for it,” she says. “We didn’t do the cake to go; we only served it in the restaurant. When people would find this out, they would change their whole plans and come to the restaurant so they could have the cake.”

German chocolate cake’s sustained popularity can partially be explained by its endurance as a recipe on the back of Baker’s Chocolate bars (surprisingly still widely available at grocery stores), and as a packaged cake mix sold in grocery stores. It also plays on a nostalgic longing for foods that prize comfort and taste above good looks. “In this day and age of cakes that don’t look like a cake, German chocolate cake is just a cake,” Reed says. “You can’t shape it into anything; you can’t make it look like an elephant. It’s just a smart balance of flavors.”

One of its more modern (and controversial) adaptations—an attempt to make the disheveled cake look a little more photogenic—involves piping chocolate frosting over the top of the coconut pecan frosting. “It’s inappropriate to have chocolate frosting,” Parks says firmly. “The cake itself has enough chocolate flavor that it can stand up to the filling, but it’s not stealing the show. It’s not about the chocolate. It’s about the filling.”

I felt similarly as I was testing and tasting various “upgraded” versions of German chocolate cake; there was one with an espresso-chocolate base, another filled with ganache. As an afterthought, I tried the original recipe from The Irving News Record, which included shortening, canned milk, and the original Baker’s German Sweet Chocolate. I thought it might taste artificial and saccharine, but it took only one perfectly gooey bite for all the other versions to fade into the distance. I suppose that’s the reason why German chocolate cake is so adored in the first place: It may not be the cake you expect to love. But you love it deeply anyway.

In this recipe, gooey coconut-pecan frosting is spread between layers of moist chocolate cake. Despite its name, German Chocolate Cake is misleadingly American, and the term actually refers to a specific ingredient used, Baker’s German Sweet Chocolate.

Adapted from The Irving News Record