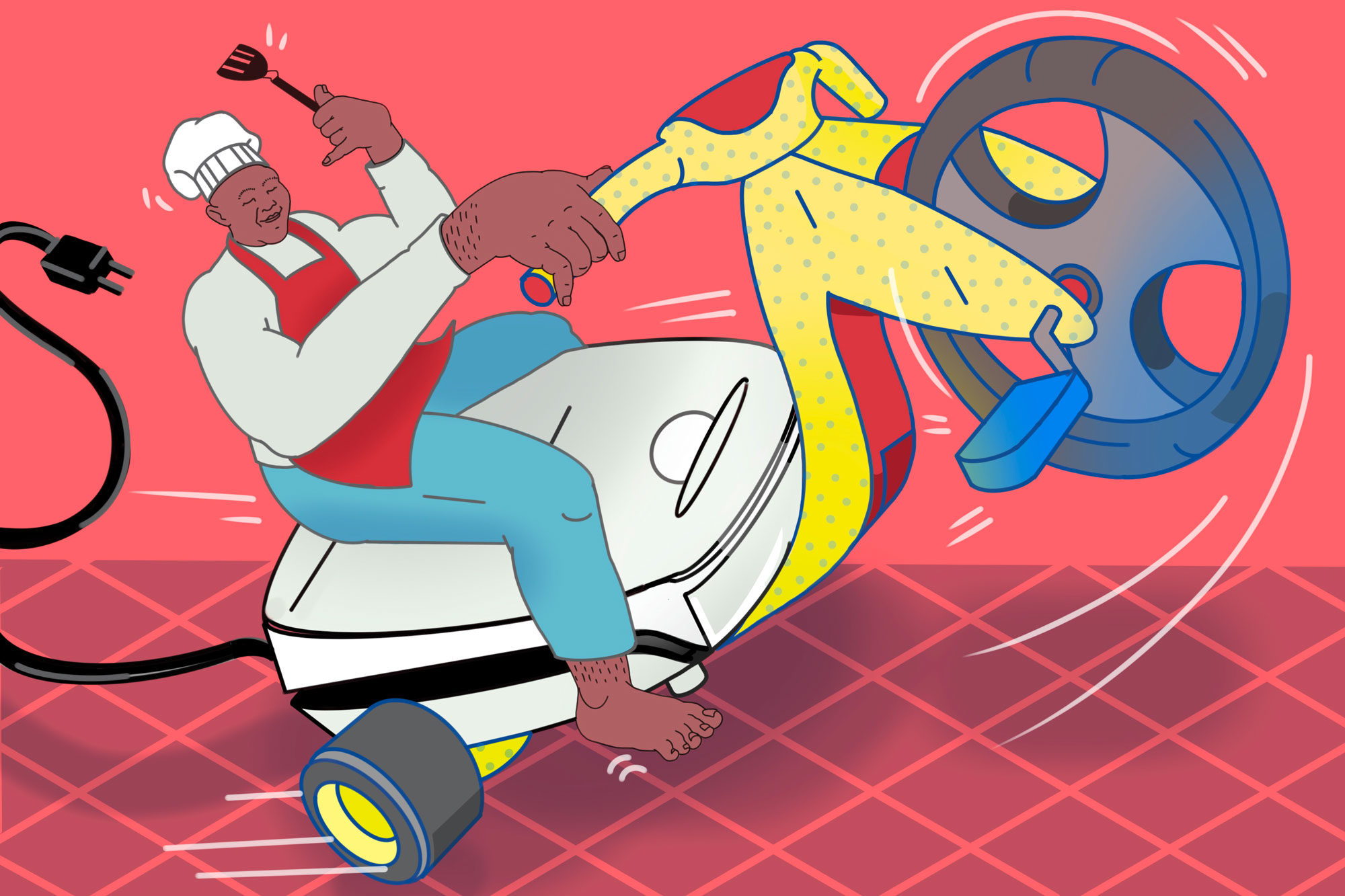 The George Foreman Grill may have been advertised as a fat-fighting machine and used as fuel for jokes, but it also got people to cook.

The contenders were formidable. In one corner, the Real Deal Grill, from four-time heavyweight champion Evander “the Real Deal” Holyfield. In another, the Family Size Health Grill from nine-time Olympic gold medalist Carl Lewis. In Japan, you had the Jackie Chan Grill, from the eponymous action star. Hulk Hogan told a 2011 Comic-Con panel that he almost had a grill but decided to make meatballs instead, while Muhammad Ali’s grill was a mere Onion spoof.

There was one countertop “grill,” however, that initiated this battle royale and that would hold the undisputed heavyweight championship belt for nearly a decade around the turn of the millennium—the George Foreman Lean Mean Fat-Reducing Grilling Machine.

We were in the height of the no-fat era, when a “healthy” nibble was the carb-laden SnackWell’s or baked potato chips loaded with the anal-leakage-producing Olestra. When Shedd’s Spread Country Crock was how we buttered our bread. Back then, a boneless chicken breast—no seasoning, no sides—was a fully acceptable meal. The patented panini-press-like gizmo, designed by Michael Boehm as the Fajita Express in 1994, didn’t start to take off until George Foreman signed on.

“It’s so good, I put my name on it!” he famously exclaimed in the inescapable late-night infomercials. Boehm had tapped the portly puncher because he reportedly ate a hamburger before every bout.

Completely lacking an on/off button, the grill was good to go the second you plugged it in. Eventually heating up to 400ºF, it was able to cook turkey burgers in just two minutes, its patented sloped surface shushing fat drippings down the nonstick grill slide and into what was essentially a flimsy plastic canoe (and God forbid if you accidentally caused that to capsize). It was simple to cook with—“goof-proof,” claimed Boehm—and Salton, Inc. believed it was simple to clean as well, but more accurately, it was simple to continue cooking on it even when it was a little dirty.

That’s one reason why, in the late 1990s and early aughts, it would truly define dorm-room, first-adult-apartment, and sad-lonely-bachelor cooking. It may be impossible to believe if you were born into a world of Top Chef, immersion circulators, Anthony Bourdain, and $500 Japanese chef’s knives, but there was a time when you could not go into someone’s shoddy rental unit without seeing a Foreman Grill sitting on the kitchen counter, usually still caked with fat globules, next to a sink full of dirty dishes.

Before the aughts were done, the “George Foreman” (eventually no one said “grill” when they spoke of it) had sold over 100 million units and made the Champ more than $200 million.

“Guys take a piece of chicken, they put it on the grill, and they think they’re cooking.”

Has any modern kitchen gadget ever reached such ubiquity? Certainly not the much-discussed Instant Pot, which moved a mere 5 million units during its peak three years. A 2016 episode of History Channel’s Million Dollar Genius claimed the George Foreman Grill is the second-most-purchased home appliance of all time, after all brands of television combined. It was arguably as easy to use as the boob tube.

“Guys take a piece of chicken, they put it on the grill, and they think they’re cooking,” smarmed Jay Leno during Foreman’s 1997 appearance on his show, just as the product was about to fully enter the zeitgeist—and, fittingly, my freshman year of college. But Leno actually understood the grill better than just about anyone, adding, “No, what you’re doing is making something to eat.”

It’s a subtle distinction. I was raised in the 1980s, when no one except moms really cooked; it just wasn’t a cool thing to do. To “make something to eat,” you simply heated shit up. A snack of Toaster Strudel, some Totino’s Pizza Rolls in the microwave, that foil-covered brick of Stouffer’s lasagna if you were feeling flush.

And while I can’t exactly say I loved the Foreman back when I was forced to use the then-$19.99 device in my Syracuse University dump of an apartment, in retrospect, I realize that it was the bridge—or the training wheels—that transformed ’80s and ’90s kids like me, who grew up on lowbrow chain-restaurant food and processed microwave meals, into the DIY-everything home chefs of this century. For people like us, it was our first real kitchen tool. And it didn’t hurt that its spokesman emanated red-meat-eating masculinity.

“I always said that the George Foreman Grill is a better invention than the iPhone,” claimed rapper and chef Action Bronson on a Complex panel in 2018. In countless interviews, he notes that the device had more impact on his cooking skills than even the culinary school he briefly attended and dropped out of. “The George Foreman grill makes everything approachable,” he told AM New York.

By 2005, on Esquire’s list of Things a Man Should Never Do Past 30, “Cook exclusively on a George Foreman grill” appeared right before wearing a sports jersey.

“Ten years ago, a 28-year-old attorney would never cook for himself at home,” Bobby Flay told the Washington Post at the start of the Foreman Revolution, in 2000, in an article touting the device. “Now it’s okay for him.”

Although most colleges eventually banned the grill due to smoke and electricity concerns, this didn’t stop Pepperdine University from hosting, in 2005, “The Next Grilleration: George Foreman’s College Grill-Off.” It was won by University of Missouri student Dan Meyers, who prepared a three-course meal of crab cakes, quail, prosciutto-wrapped asparagus, and phyllo-dough-wrapped chocolate cheesecake—remarkably all on the grill. The tide was clearly already turning for the next generation of ambitious home chefs.

Of course, the device’s associations with college kids and men-children had a downside. By 2005, on Esquire’s list of Things a Man Should Never Do Past 30, “Cook exclusively on a George Foreman grill” appeared right before wearing a sports jersey.

More than a decade later, I can’t imagine walking into someone’s home and seeing a George Foreman plugged in and ready to go. But it’s possible that Generation Z may be ready to start the ol’ Georgie cycle all over again. Just this year, a recent college grad reporting for Business Insider wrote about the Foreman Grill as a rare life hack for the busy home cook, boasting about its cheap price ($40) and carefully explaining its fat-draining surface.

“I don’t want to sound hyperbolic, but this little George Foreman grill has been a complete game-changer,” Mara Leighton wrote, revealing that she used to hate cooking but now cooks every single night. “It’s my most-used kitchen tool, and it’s the best gift I’ve gotten in years.”

Let’s see what she’s cooking a decade from now.