Get a free recipe
Subscribe
Galette by Monsieur Alain
By: Daniela Galarza 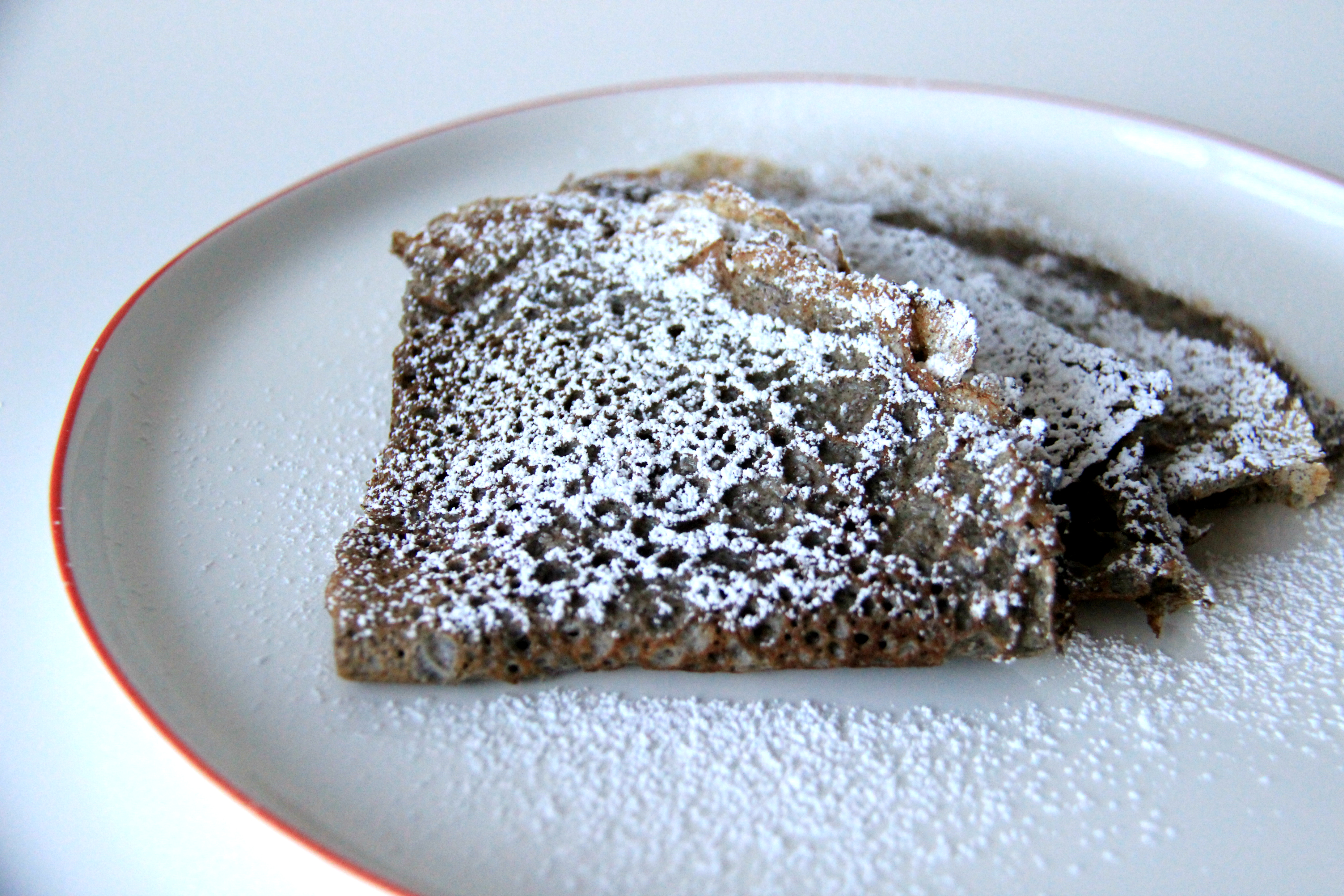 A trip to Paris inspires a deep dive into the art of the ultra-thin French pancake.

It was a cold, rainy afternoon when I wandered into one of the oldest markets in Paris, the Marché des Enfants Rouges, in the city’s 3rd arrondissement. In the center stands Chez Alain Miam Miam, “a shop you must, must visit, no matter what else you do,” a friend had told me, emphasizing that the sandwiches and buckwheat crepes, which the French call galettes, were the thing to order. (“Miam” is how the French spell “yum.”)

So on a Friday around 11:30 a.m., I got in line. There were 17 people ahead of me. Nearby, a cheesemonger behind a long glass case presided over her vast array of fromage—pucks of chèvre covered in dried rosemary, wheels of Brie the size of dinner plates, rounds of Reblochon that sagged under their own fat content, and bricks of holey Emmental. Across the way, a man hawked Moroccan stews and couscous packed into tall pyramids, his cauldrons steaming with the scents of cardamom and harissa.

About 90 minutes later, my stomach was rumbling, and there were still 13 hungry patrons in front of me. Somehow it took another hour to get to the head of the line. But by that point I had studied the ways of Monsieur Alain Last-Name-Unknown.

The first thing you need to know about Alain is that he lacks a sense of urgency. He treats each guest like an old friend. “Ça va?” he’ll ask cheerfully, as he reaches for a ciabatta. Still chatting, he slices the loaf lengthwise and douses it with olive oil, staining the crumb a golden green.

Alain knows how to layer flavors and marry complementary ingredients as he builds each sandwich. A generous pile of lettuce, hot, caramelized onions, shredded raw carrots, and thinly sliced tomatoes are followed by a sprinkle of dried basil, lemon zest, and gray sea salt. Thick slices of French ham, lightly cured, buttery, and bright pink, come next, followed by half a ripe avocado. Then cheese: nutty Comte or funky Cantal, shaved off massive wheels. Alain shuts each sandwich like a thick Victor Hugo novel and presses his weight onto it, willing the bread to hold its fillings in place like an overstuffed suitcase. Then each one is placed atop one of his smoking crepe griddles.

The slick black cooking surface, made of well-seasoned cast iron, hiss as the oil dribbles out of the sandwich. The lettuce steams as it wilts; the salty cheese melts into pools that caramelize around the sandwich as it toasts, adding another layer of flavor and additional crunch. Alain uses wooden paddles roughly the size and shape of paint stirrers to press, prod, and toast the bread on four of six sides, resulting in an impressively compact rectangular cube. It gets deep brown on most sides, with a few darker burnished pockets where the oil soaked all the way through the bread. Passers-by turned their noses toward the griddles as the scent of browned butter, toasted bread, warm pork, fried cheese, and caramelized onions wafted through the market, challenging the cheesemonger’s funk and even the spiced Moroccan dishes a few feet away.

When I finally got to the front, somehow Alain knew I spoke English. “I am sorry,” he said, gesturing to the line. I nodded and ordered a sandwich—ham and Comte; hold the avocado—in broken French. He got to work. Periodically he’d shift over to the crepe griddles and flip a sandwich, or a delicate galette, which I watched with growing interest.

Graphite-gray buckwheat crepes hail from Brittany, a region also known for its seafood, butter, beer, cider, mineral-rich sea salt, and the sweet and salty pastry known as kouign amann. While watching my sandwich toast, I decided to order une galette avec beurre sale, a galette with salted butter. Alain nodded and proclaimed in halting English, “I make the best galettes in all of Paris.”

He rubbed a knob of sweet butter atop a hot griddle. The grease popped as he poured a puddle of batter onto the slick surface. A wooden paddle helped spread the batter into a thin sheet. As he did all of this, in under ten seconds, the batter boiled, and as the bubbles popped they left tiny holes behind. Satisfied, Alain shifted back to his sandwich station.

I make crepes at home a lot—they’re easy, and I enjoy the springy texture—but I had never made a galette. As I watched the batter solidify into a thin, pocked round, I worried it was burning. I looked over at Alain; predictably, he was oblivious. Minutes went by. Nonchalant, Alain returned and swiftly slipped a paddle beneath the galette, flipped it, and moved back to his sandwich station. I sighed; the galette had not burned. It was a deep brown, darker than a traditional crepe because of the buckwheat flour. A moment later, Alain was back with a cold block of salted butter. Four thick pats landed on the galette; each would melt and then soak into its crevices. I could smell the butter starting to brown, and I got nervous again. Just when I thought all was lost, Alain, humming a tune, returned, used a paddle to fold the galette into quarters, slid it into a paper wrapper, and passed it to me with a wink.

The sandwich was very, very good, but the galette was a revelation. It warmed my fingertips, which had turned purple from the damp cold, and I closed my eyes to breathe in its salty scent. It tasted a little bit like the smell of a fire-roasted chestnut. Crisp on the edges, soft in the center, nutty, and lacy all over—it was a simple thing done perfectly. I promised myself I would re-create it.

Back home in New York, I scanned galette recipes in cookbooks. San Francisco–based pastry chef Elisabeth Prueitt’s newest book, Tartine All Day, contains a recipe, as does the Country Cooking of France by cooking instructor Anne Willan. I made those, as well as four more I found online. But when I cooked each, they yielded limp, eggy crepes. The batter refused to achieve the laciness of Alain’s galettes. I played with the liquid: Was water better than milk? Skim better than whole? I fiddled with the amount of flour, looking for the secret. The trick, it turned out, was the type and temperature of the pan.

I disabled my smoke detector, put my cast iron on the stove, greased it well, and turned the heat all the way up. When the air above the pan blurred hot like a desert landscape, I poured in some batter, grabbed the handle with a towel, and swirled. The first one was jagged, but there it was, that lacy pattern of pinholes. I waited longer than I thought I should before flipping. I topped it with more salted butter than necessary and let it soak through. And then, moments later, I folded it up into a paper towel and took a bite, eyes closed, taste memory complete.

These simple, delicate salted butter galettes are inspired by Chez Alain Miam Miam, a bakery in Paris. While galettes are usually made with gluten-free buckwheat flour, these call for all-purpose flour in addition to the buckwheat. You’ll want to make the batter at least an hour ahead, but it can also be prepared the night before.