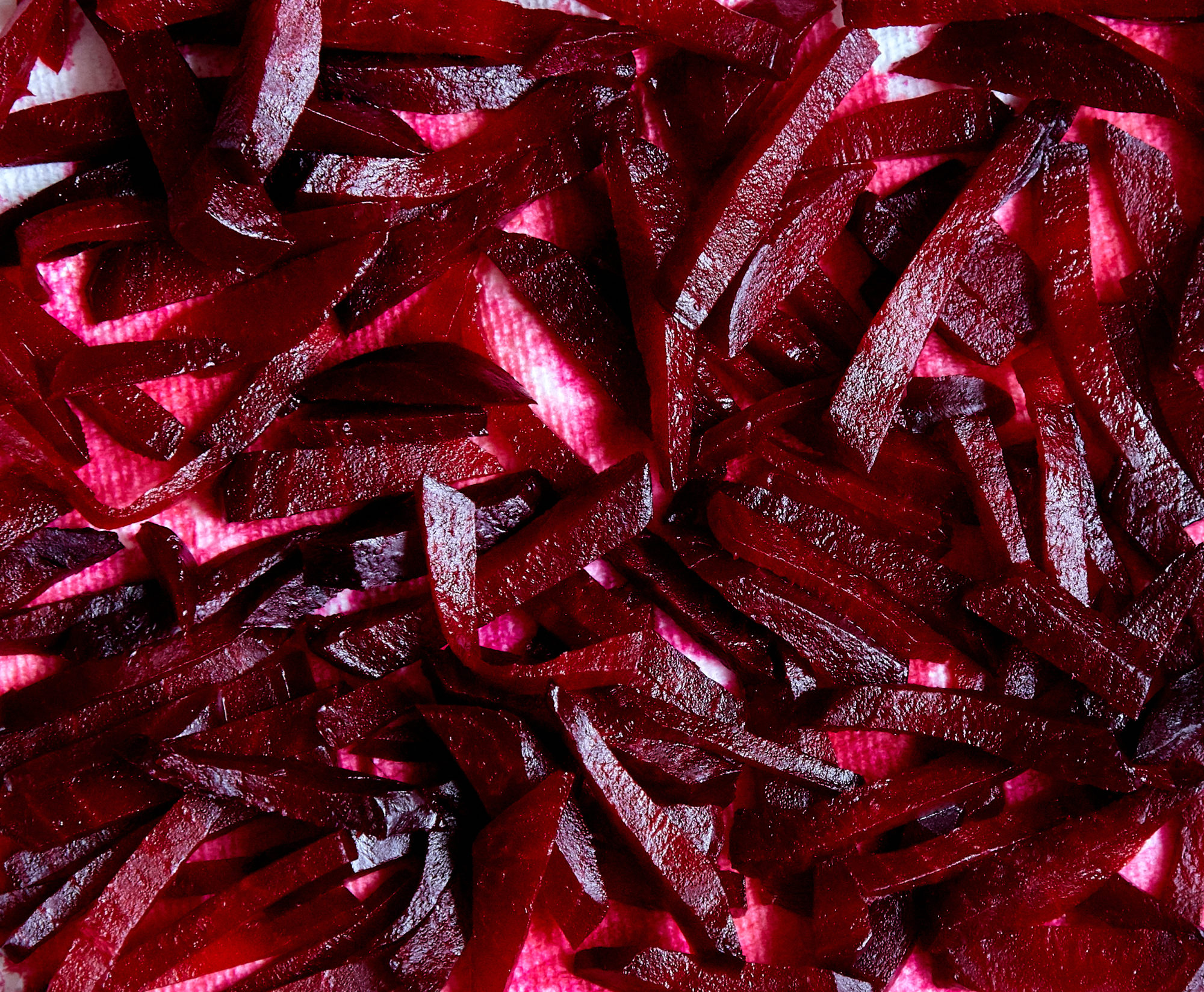 The story of vegetable soup, and how Anya von Bremzen’s 1990 cookbook Please to the Table became a lifeline for one Wisconsin family.

“We doubled the Jewish population in River Falls,” says Boris Wolfson, stirring a pot of borscht, a rainbow brew of carrot, julienned beet, corrugated cabbage leaves, and tender hunks of beef. “And the number of Russian speakers went from zero to four,” he adds with a chuckle. In 1990, with his parents and younger brother, a then 15-year-old Boris arrived in Wisconsin from Yalta, a coastal city in the Crimean Peninsula, abutting the Black Sea. It was supposed to be for a three-month vacation. They came with a few suitcases and a few hundred dollars. But that’s not what their hosts had planned for them.

I am in Boris’s kitchen in Amherst, Massachusetts, with his wife, Amanda, and his son, Benjamin. A few days earlier, I’d pestered my parents’ friend Ron Davidoff, another man of Eastern-European Jewish stock, about borscht. It just so happened that Boris had invited him for this meal, so Ron let me tag along. My father’s grandparents also came from the region—Kiev—most likely driven out by pogroms of the time, but my father never took an interest in that heritage, and so here I am to prod at these shared roots.

As Boris stirs the pot of borscht, he quizzes Benjamin, already an accomplished pianist at 12 years old, on the second movement from Mendelssohn’s Third Quartet playing on the stereo, admonishing him when the boy doesn’t identify it. “He should know better,” Boris says with stern fatherly affection.

Twenty-eight years ago, when Boris first arrived with his parents and brother, Misha, there were greater concerns. Things were bad back in Russia and getting worse. Boris’s father, Yanislav, a pediatric surgeon, had been questioned by KGB officers for some works of fiction he published under a pen name. In a brave but possibly foolish stand, his mother, Inna, a schoolteacher, had refused entreaties to spy on a friend directing a music program in West Berlin. Boris Wolfson (far right) with his parents and American hosts in front of the family’s first apartment in Wisconsin.

She had also set up a pen-pal exchange with students in Wisconsin. And it was the teacher of these classes, Margaret Timmerman, whom the Wolfsons visited in Wisconsin. A few years prior to that visit, Margaret and her brother-in-law had visited them in the USSR and noticed how discreet they were when making phone calls, how careful to pull the curtains closed.

Even in the mundane, they sensed a creeping fear. For the Wolfsons, there were other incidents, too, ones related to being Jewish—like enduring slurs at school and being passed over for promotions. Anti-Semitic pamphlets were circulating, and rallies taking place, as rabidly nationalist sentiments began to take hold.

Once the Wolfsons landed in Wisconsin, Margaret and her husband, Albert—kind, retired Methodist farmers—had already decided they were going help them make their way in America. They found them an immigration lawyer, and new neighbors lent them an old car. To help them with rent, members of local churches set up a fund called the Western Wisconsin Refugee Board, the only recipients being the Wolfsons. When Boris won a scholarship to the University of Chicago, just three years into living in America, they were all stunned.

Their transition wasn’t without its bumps. In their earlier years in the U.S., Boris’s mother, an eclectic cook who excelled in both wild-mushroom soup and chocolate-covered éclairs, was dismayed that the ingredients just weren’t the same. It was in an American cookbook that they found what they were missing. Please to the Table, Boris told me, was a staple of the Russian émigré community because the author, Anya von Bremzen, had figured out how to approximate all the tastes of the old country with different ingredients, like tamarind, available in America. The cookbook, published in 1990 by Workman, was a lifeline back to a home country where they no longer felt at home.

The recipe for the classic Ukrainian borscht that Boris is cooking is from Please to the Table. Boris jokes about the soup not being Jewish, with a twinkle in his eye, when I first walk into his kitchen. And by that, he means it incorporates pork and beef as well as dairy, added at the table in the form of sour-cream dollops. In Yalta, his family hadn’t adhered to kosher law, eating whatever meat was available when it was available. He had started cooking this borscht the day before, with a stock of both beef marrow and ham bones. It is a dish that is best the next day. The bulk of the project is in the peeling, chopping, and julienning of so many vegetables and herbs: beets, potatoes, tomatoes, carrot, and a small mountain of shredded green cabbage. What makes this borscht distinctively Ukrainian, Amanda tells me, is the addition of five or six prunes, pitted and chopped. “That’s a very Southern thing,” Boris adds.

All the borschts I’d ever known were an inky garnet red—the ones I’d made at home, staining my fingers an earthy red, or the others I’d eaten late at night alongside vareniki (dumplings) at Veselka, the 24-hour Ukrainian café in Manhattan’s East Village. This borscht is different. Instead of murky, it is clarion, each ingredient a distinct morsel and each spoonful a rearrangement of potential combinations. Cabbage, pepper, potato, and pork in one bite; beet, carrot, and cabbage in another. As we settle in at the table with our bowls, Boris calls out to make sure we’ve gotten all the different kinds of meat: dice of ham, bacon, simmered beef chuck. The beet-red Saveur recipe I had used before was also based on the very same borscht Boris made from Please to the Table. But the food editor inverted the proportions of beet and cabbage, calling for four times as many beets and a paltry amount of cabbage. In that way, borscht recipes are like editing a photo: You can dial up the brightness or saturation by scaling certain ingredients up or down. There are myriad forms of the sour soup, some started with oxtail broth, others with more root vegetables, like celeriac, and still others with cucumber or even mushroom. What is constant is the cabbage: Borscht belongs to a class of Slavic cabbage soups.

“There are big debates about the cabbage,” says Boris. His own tweaks on the recipe include roasting the marrow bones and adding the cabbage to the soup at an earlier stage instead of right at the end, so that it is softer rather than crunchy. The beets were more of an accent than a main feature, but still a defining one. “Ukrainian farmers are very proud of their beets,” says Boris. “The soil is better in the South.”

As Beethoven’s Fourth Quartet hits its crescendo, warbling out of the speakers, Boris and his son lock eyes, singing the tune loudly together and piercing the air with pointed fingers. We’ve all had several bowls of borscht now, along with a cured gravlax Ron made and a mushroom pie baked by Amanda. Here we were, Ron, Boris’s family, and me, all here from the old country, more or less by different means, but here the same, sharing our unkosher borscht together. Now, it is time for apple pie and ice cream. Dill is strewn across the table. The curtains are open.