Get a free recipe
Subscribe
When Food Doesn’t Bring Us Together
By: Tina Vasquez Illustrations: Vance Lump 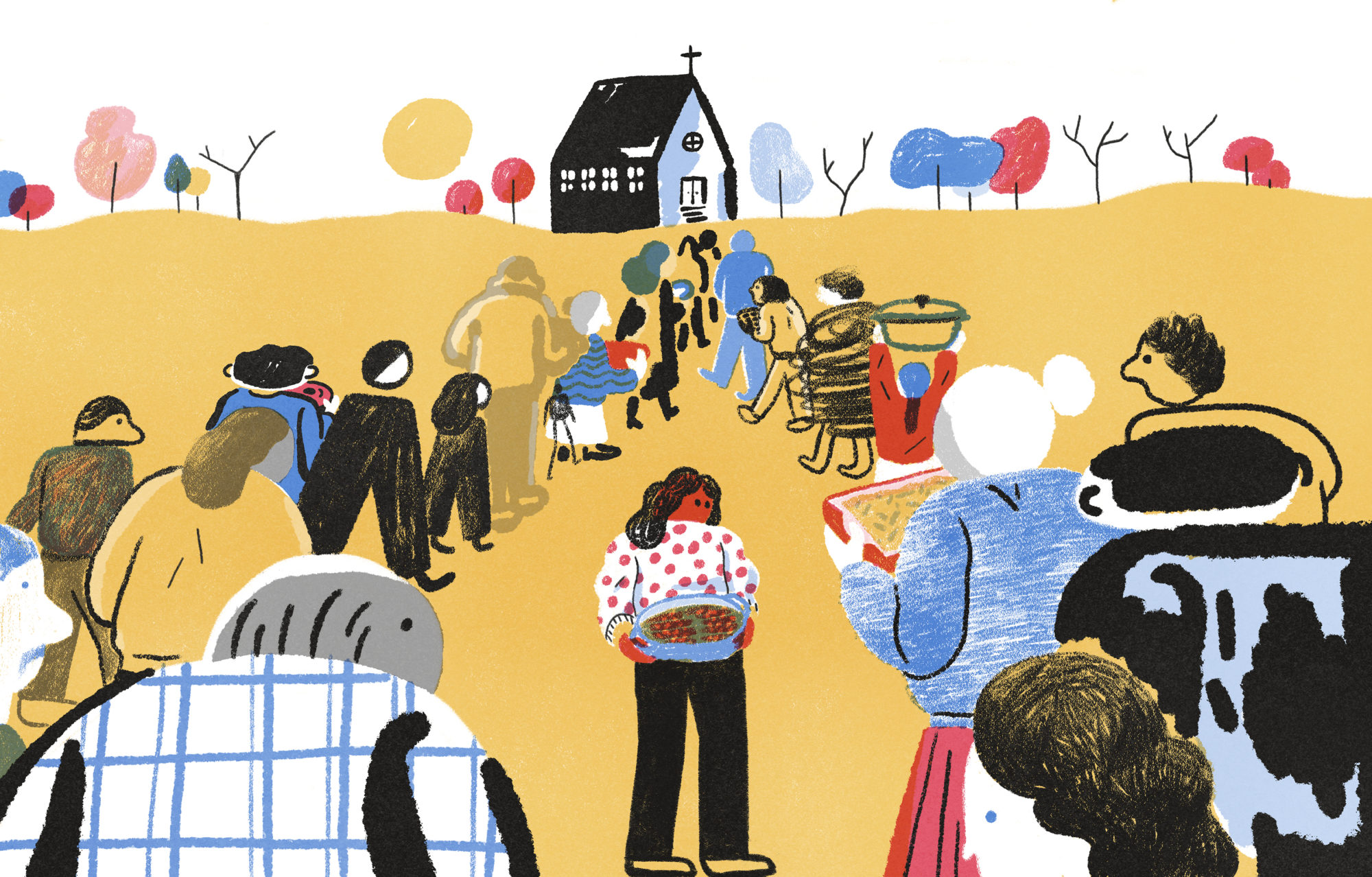 Homecoming is an annual tradition in Southern churches. But what happens when the welcome mat isn’t rolled out for everyone?

I spent hours preparing my contributions to last year’s Homecoming. The enchiladas verde were made from scratch. I used the stock from boiling the chicken to thin out the green sauce made from roasted tomatillos, onions, a whole head of garlic, and poblanos—not jalapeños, because my fiancé warned me that if the enchiladas were spicy, no one would eat them. I prepared empanadas with a filling made of dried apples that I resurrected by boiling in apple cider, brown sugar, and warm spices. It was a fusion dish of sorts, my take on a dessert empanada/Southern fried apple hand pie, with a dough made out of masa. I wrote “Empanada: fried apple hand pie” on the label I lovingly placed next to them.

In North Carolina, a place I have called home for nearly three years, we are deep in the heart of Homecoming season. Homecoming is a quintessentially Southern tradition of welcoming people back to the church of their childhood; it takes place from late summer to early fall.

The gathering varies by region, church, and denomination, but in the rural Piedmont Methodist church where I attend Homecoming with my white fiancé’s family, the setup is always the same: preaching, a service memorializing those who have passed, and a communal potluck. I am decidedly there for the food—the silky persimmon pudding, squash casserole covered in buttery Ritz cracker crumbs, and often three or four different kinds of deviled eggs.

People here love our cooking as long as it lines up with their ideas about what Mexican food is: hard-shell tacos and a bastardized version of arroz con pollo, slathered in queso.

When I moved to the South with my fiancé, a North Carolina native who teaches at a local community college, I was automatically an outsider. I’m a Latina who grew up as the daughter of a Mexican immigrant in a mixed-race and mixed-status family in Southeast Los Angeles. I am a full-time immigration reporter at a website that focuses on sexual and reproductive health. I am also an atheist. Spending Sunday in a church is as foreign to me as it gets.

Like the rest of the country, the South is still reckoning with its violent history of racism. Racism is not region-specific, of course, but before moving here, I’d never seen it deployed by people who slapped such a veneer of politeness on top of it.

The election seemed to embolden people in new and sometimes frightening ways, like the time I was walking in our neighborhood wearing a T-shirt that had Spanish writing on it and two young white women circled the block to yell, “Go back to your country.” More than once, I’ve been mistaken for a cleaning lady. But most of the time, in rural North Carolina, racism is more abstract and more quiet than this. People are nervous to try new foods, and even more nervous to interact with a person for whom they have no point of reference. The first time I attended Homecoming, at the church Ben grew up attending, I made a salad that had won over many family gatherings and potlucks. It consisted of cubed jicama, charred corn kernels, black beans, red and yellow bell peppers, globs of avocado, and an acidic, smoky dressing of lime juice, olive oil, and healthy pinches of cumin and chipotle powder. I placed a small card next to the salad, listing its ingredients. Ben had warned me that labeling my food as is would make people reluctant to try it, especially if they didn’t know what jicama was, for example. I hated that he was right, that Homecoming was the only time I had leftovers of my salad to bring home.

North Carolina has a sizable Latino population, a growing percentage of whom are newly arrived Mexican and Central American immigrants. But often, immigrants who open restaurants center their menus on dishes they hope will lure in Americans. People here love our cooking as long as it lines up with their ideas about what Mexican food is: hard-shell tacos and a bastardized version of arroz con pollo, slathered in queso. When I make the food I grew up cooking and eating with my father, they seem to fear it; they’re afraid they’ll sound foolish trying to pronounce ingredients or dishes they don’t know, and they’re always afraid the food will be too spicy.

Breaking bread is usually thought of as a feel-good way to share space and find commonalities, but for me, loving food in North Carolina has been an isolating experience. On the one hand, it has been the only topic of conversation between myself and people with whom I might otherwise have nothing in common. But here, food has its limits as a conversational jumping-off point. Sharing enthusiasm about a delicious empanada is fine. But my interest in the ways that food overlaps with immigration and racial justice—who picks, cooks, and serves it—is not really up for discussion. People become quiet or awkwardly change the subject. Sometimes they even push back, dismissing what I’ve said with a wave of the hand and a “Not everything is about that.”

My hope for future Homecomings is also my fear: that someone will actually engage me about my food or ask about my family.

Ben has been going to the one at his church for each of his 36 years, and for this reason he can assure me that I’m one of less than a handful of people of color who have ever attended, and likely the only one who has ever brought Mexican food. He can also tell me who to avoid—the racists, the overwhelming number of quiet Trump voters. But none of them have ever been a problem, mostly because few people outside of Ben’s family interact with me, much less express any curiosity about my food.

Meanwhile, I’m dying to swap recipes, even as my stubborn pride keeps me from trying to connect with people who clearly have no desire to try with me. I want to know whether crumbled saltines or Ritz crackers make the better topping for a casserole. I want to ask the woman who brings perfect sausage biscuits if she uses Crisco, butter, or a combination. And then there’s the man who expertly grills pork tenderloin every year. He and I are usually the only people to leave the graveyard memorial service early to prep our dishes, but he quietly slices his tenderloin, never speaking to me. He does, however, engage others as they file in to grab their covered casseroles.

Slowly, people at Homecoming have warmed up to my food, even if they know it by a different name—my tres leches, for example, has become “strawberry and cream cake.” Aside from that first failure with the jicama, I’ve never returned home with any leftovers. But my hope for future Homecomings is also my fear: that someone will actually engage me about my food or ask about my family. I want people to know where I come from, but I also worry about how these conversations may spiral, as what feels like one of the country’s most volatile topics—immigration—is central to who I am.

Food can open people up to new worlds, and this can be especially true in the rural South. But lately I’ve thought a lot about why I’m trying to build bridges with people who voted to have those I love deported. My food reflects my identity and heritage, and when my new community picks and chooses the aspects of my cuisine they find most palatable, I know they are in some sense doing the same to me.

Tina Vasquez is an award-winning journalist based in North Carolina, where she writes full-time about the U.S. immigration system.