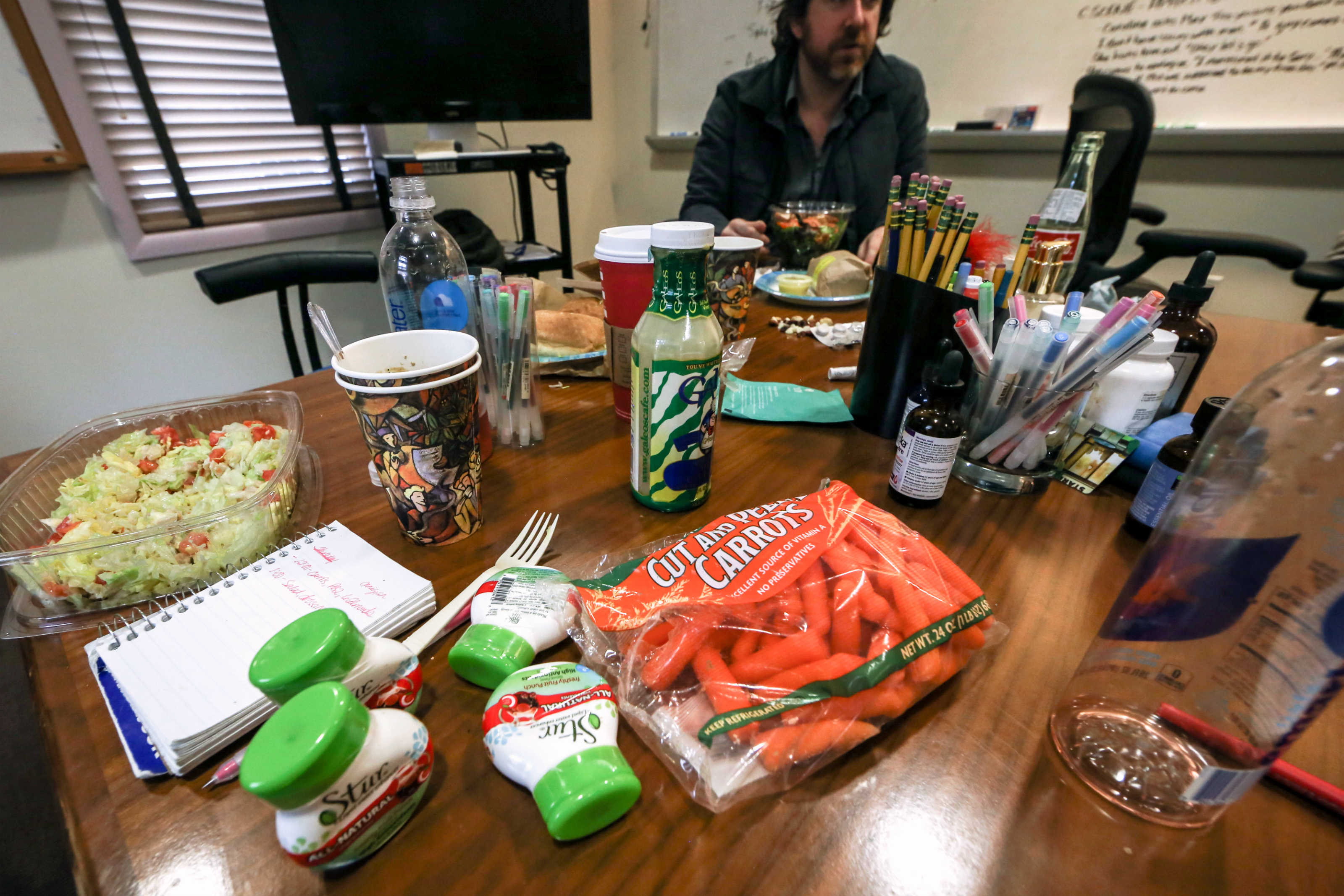 2 Broke Girls, the popular CBS sitcom about striving Brooklyn gals who work in a diner, start a cupcake business, and open a dessert bar, is a show that both celebrates and skewers food trends and scenester culture with a salty gusto. It’s about the high-low—the greatness and ridiculous of both refined dining and late-night meatloaf.

“We make fun of trendy shit as well as the comfort stuff,” says executive producer Michelle Nader, who eats kale, avocado, and goat cheese most days and has a little refrigerator full of pressed juices near her desk, but who grew up in South Philadelphia and at 16 put on a fur coat and painted her nails red to eat a cheesesteak. (It was for a Geno’s Steaks commercial.) “The set is literally the diner, which is garbage comfort food, and this dessert bar, which is kind of the more modern, hipster-y thing.”

Or as co-executive producer Nate Reger puts it, “I think as comedy writers you’re self-conscious and self-aware, so you can make fun of both things you like and things you don’t. I love farmers’ markets, but I’m really good at making fun of a farmers’ market.” Co-executive producer Michael Glouberman, sitting at the head of the table, recalls working on a show where he was supposed to visit a strip club for lunch. He wound up having food delivered from the strip club instead. It wasn’t very good.

During a lunchtime visit to the 2 Broke Girls writers’ room on the Warner Bros. lot in Burbank, I watch the staff pound cold fried chicken sandwiches and veggie bánh mìs from celebrity chef Michael Voltaggio’s Ink Sack. As the writers discuss where ideas for the show originate, one thing becomes clear: Hipster food stuff in L.A. is a lot like hipster food stuff in Brooklyn.

“We went to Wolvesmouth, which was one of the craziest nights of my life,” co-executive producer Patrick Walsh says of the roving, highly art-directed, taxidermy-favoring L.A. dinner pop-up series. “We had, like, 13 courses or something. When we did it on the show, it was called Beak and it was a bunch of stuffed birds and dead birds, and they were eating a lot of baby birds.”

The show is about two young women, Max (Kat Dennings) and Caroline (Beth Behrs), who are still finding themselves. They tell dirty jokes, hook up with random dudes, plot exit strategies from their waitress lives, and visit Eater-approved hot spots to feel more worldly.

At Beak, Nader adds, “Max was trying to impress her boyfriend and wound up getting sick in the bathroom and climbing out the window to get away. I know some people at Wolvesmouth. They thought it was hilarious.”

It’s a team effort, weaving dining experiences into the show.

“Kat and Beth and I and all the writers talk about food all of the time,” Nader says. “Talking about new restaurants in L.A. is what we do between scenes. And we go to new places together. We went on a whole tour of Williamsburg restaurants a few years ago.”

As for the show’s diner-food references, story editor Justin Sayre does deep-dive research.

“I go to New York a lot and eat in diners,” he says. “The shittier the better. I love a really down-on-your-luck diner. I think I’ve been pitching disco fries for three years.”

“As L.A. and New York gentrify, it’s harder to find that real kind of place,” Reger adds. “There’s this place I go called Honey Bee’s House of Breakfast. It’s old-school, they have pupusas and Mexican breakfast and regular breakfast, and it’s fucking awesome. It’s not trying hard to be something.”

But because Reger and his colleagues aren’t broke and have a professional interest in restaurants, they also try out places popular with both food media and FOMO-suffering millennials. Reger has visited Korean fermentation lab Baroo and appreciates how the funky food is “weird as shit.” Nader loves outdoor taco wonderland Salazar (“I Uber there because you can’t park”), self-described “progressive SoCal” restaurant Here’s Looking at You (she and Reger dig the soft-shell prawns), and hyper-local Kali (vegetables, obvi). Walsh enjoys Button Mash, the Starry Kitchen crew’s arcade/restaurant: “It’s got good food for an arcade and good games for a restaurant.” Reger and staff writer Julie Mandel-Foley both hit the San Gabriel Valley for Chinese food.

Some of the writers use Jonathan Gold’s 101 Best Restaurants list in the L.A. Times as a guide.

“The great thing about him is he’s not pretentious,” co-executive producer Michael Lisbe says. “I think that’s the problem with a lot of food criticism. I don’t like fine dining, per se, so I love Jonathan Gold.”

So what are some of things the 2 Broke Girls writers have noticed recently that might become fodder for the show? Perhaps the long 10:30 p.m. lines for ice cream Reger has seen outside Salt & Straw in his Larchmont neighborhood.

“They have ropes for people,” he says. “It’s fucking crazy. It’s the only thing open [late at night]. So, like, all the restaurants are closed—it’s just Salt & Straw.”

And the way Mandel-Foley sees it, the world needs fewer places that serve grain bowls and expensive avocado toast.

The writers’ room cracks up. Reger interrupts to say that he also went to Jessica Koslow’s popular East Hollywood café and doesn’t get the appeal. Reger’s so excited by this topic that he looks like he might jump onto the table with its mess of mostly eaten sandwiches, salads, and cookies. But he restrains himself, leaving the notepads, pencils, pens, SmartWater, and La Croix undisturbed.

“I don’t really care about avocado toast,” Mandel-Foley continues. “I’ve been eating avocados since I was a little kid and I didn’t have a name for it. I just put avocado on bread or a rice cake. I refuse to spend [$9] on something I can make at home.”

Mandel-Foley also dislikes waiting in line at Sqirl. Reger says he got yelled at for not knowing where to stand. Also, Mandel-Foley adds, “Stop trying to make foods that taste bad taste good. I hate grain bowls. Don’t give me a grain bowl.”

Lisbe, meanwhile, despises any fine-dining experience “where the portions are small and I go away hungry.” He was also turned off during a meal at Odys & Penelope when he saw the chef screaming in the kitchen. “That’s the downside of an open kitchen,” says Reger, who avoids inviting Lisbe to restaurants that might upset him.

Staff writer Rachel Palmer has had issues figuring out how not to go bankrupt at Whole Foods: “You had to figure out which foods are lighter at the salad bar.”

Executive producer Liz Astrof is a picky eater who opted out of ordering from Ink Sack. She was once at a party catered by the Voltaggio brothers.

“Every single thing was smoking, with dry ice,” she says. “The popcorn was smoke. I was like, ‘Can’t I just have popcorn?’”

“We have to remember that the stuff that seems weird to us in L.A. will seem like from another planet to my family in Missouri,” Walsh says. “You kind of have to split the difference.”

For the dessert bar, they’re largely using their imagination because they haven’t found much inspiration in L.A.

“We’re trying to create something that’s ahead of trend,” says Nader, who does know about and hates the setup at the Bazaar by José Andrés, where you move to another part of the restaurant for dessert.

How a Writers’ Room Really Eats

And as comedy writers, they recognize that their food habits are pretty absurd.

“There have been more conversations about cauliflower rice than I’ve ever had in my life,” co-executive producer Reger says about noshing with his coworkers.

Executive producer Astrof mostly likes vegetables. She lives in the Valley but goes to Brentwood, where she does yoga, to buy carrots at Vicente Foods: “They cut the carrots the way I like. They cut them really thick and put them in Saran Wrap.”

Supervising producer Brian Rubenstein will eat raisins that are in the kitchen but really doesn’t care about food. He doesn’t like sandwiches and swears he’s never had coffee or soup. “I drink no hot liquids,” says Rubenstein, who does consume salads, chocolate, and Wheat Thins.

Also, Rubenstein won’t eat sushi or any other seafood, and he removes the cheese from pizza.

Executive story editor Charles Brottmiller used to be a writers’ assistant who pounded at least six Red Bulls a day to stay alert. He beat that habit and moved on to Mexican Coke. “Charlie had to do what he had to do to survive,” Nader says.

Staff writer David Schecter used to be a production assistant and remembers running red lights and driving as far as Beverly Hills to bring back lunch. It turns out, though, that things can be crazier on other shows.

“My last job had a really stocked kitchen, so I got it out of my system,” says staff writer Mandel-Foley. “I definitely think that since I started working here and watching the way you eat—I’ve never worked under strong, powerful women before, and they eat the healthiest I can imagine. I’ve probably eaten bread in this room three times.”

Co-executive producer Michael Glouberman used to work on Mike and Molly: “We got Cronuts—people would be sending runners out for hours to come back with food.”

Astrof previously worked on King of Queens: “Kevin James likes to eat so much that one night we ordered from [grocery store] Ralph’s. He made fish sticks and a giant pot of mac and cheese.”

Sometimes, even at 2 Broke Girls, you just do what’s necessary. A lot of the writing staff prefers to eat healthy, but there have been few complaints on the rare days that Schecter shows up with 20 burgers from In-N-Out.