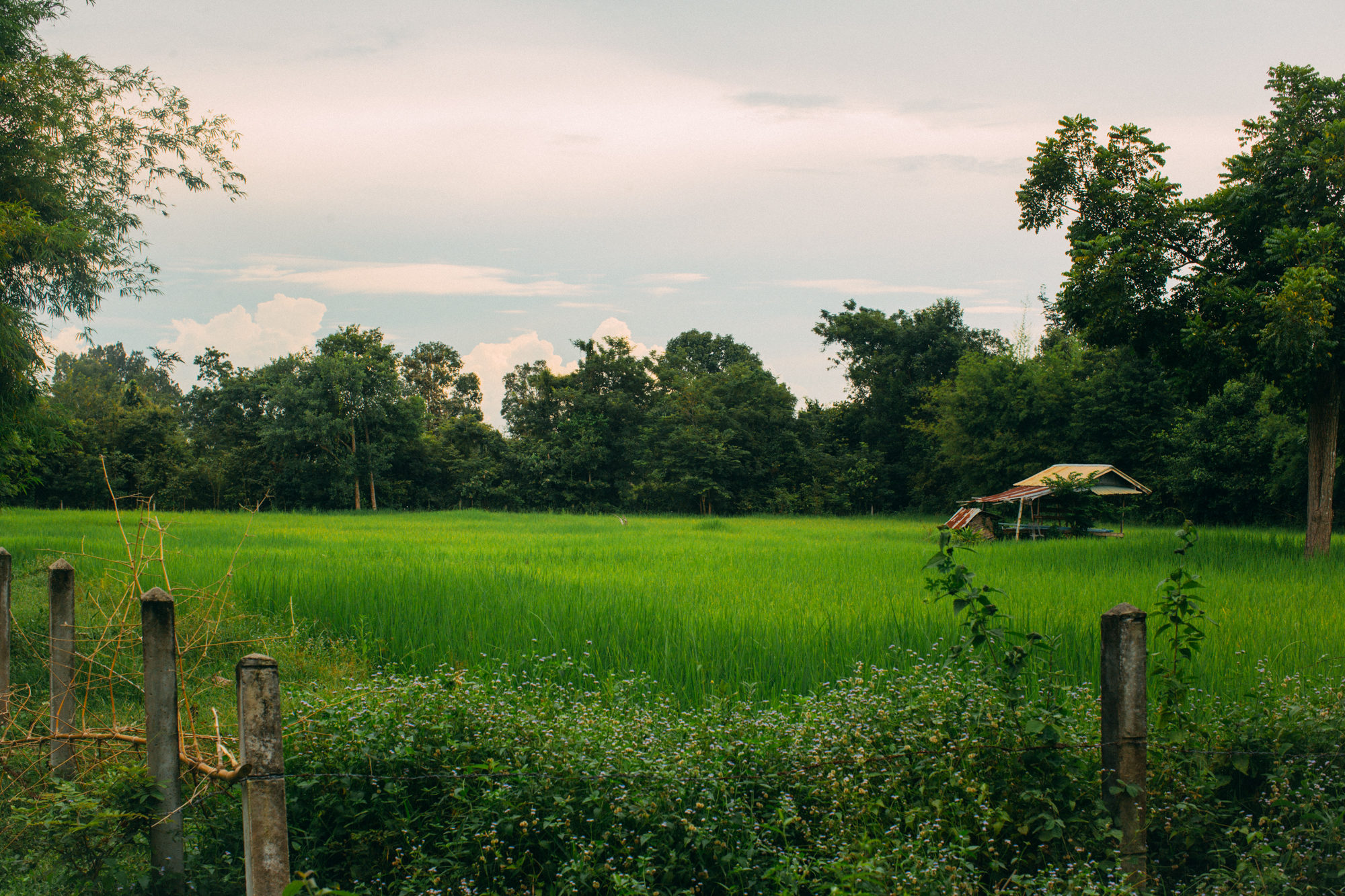 San Francisco chef and cookbook author James Syhabout takes us for shrimp on the Mekong.

The sun scours the road and distant green rice fields, where farmers work in the heat and water buffalo lash their tails at flies I can’t see. James Syhabout, his mom, and two cousins pack the back bench seat of another cousin’s Toyota Hilux, but I have the seat of honor: left-seat shotgun (the car’s a right-hand drive), though I share it with a seven-year-old who has a sharp elbow, playing Angry Birds on his dad’s cracked phone. We turn from the village road onto the main highway.

James and I have traveled here from Oakland to do research for his book, Hawker Fare: Stories and Recipes From a Refugee Chef’s Isan Thai and Lao Roots. James is a chef with a two-Michelin-star restaurant in Oakland called Commis and a casual Lao-Isan place, Hawker Fare, in San Francisco. He arrived in Oakland in 1981 at age two, under a Lao refugee program (his dad is from Laos) in the wake of the Vietnam War. The book is an apology letter from James for turning his back on his Lao-Isan past and abandoning the food, though he always loved it, to be a fine-dining chef who staged in Europe.

In the car, a knot of white jasmine buds and roses strung on a ribbon hangs from the rearview mirror. It’s phuang malai, a bringer of good luck for Songkran, Thai New Year. As the truck lurches through its ascending scale of gears, the flower chain bobs, dinks my face, swings back and dinks me again, crowning me with an invisible halo of sweetness—a heavy aroma of jasmine tea without the tannic smell. The boy looks up from his game: I am an apparition, a white stranger in this truck smelling of sweat and flowers, on a lunch excursion to a floating restaurant on the other side of Ubon Ratchathani, a crowded city in northeast Thailand. “We’ll get the famous dancing shrimp,” James told me before we got in the truck, adding in a half-whisper, “You just have to take a little bit of it.”

Nobody who’s invited to share a meal in the village where Da, James’s mother, has a farmhouse now after leaving Oakland is truly a stranger. If the Isan region has taught me anything, it’s that a guest becomes adjunct kin right after the first sawasdee khrap, the pray-hands bow of greeting.

Thailand’s Isan region and Laos, which lies across the Mekong, have an insoluble bond. Before the French dictated the borders in Southeast Asia, Isan was part of the Lan Xang Kingdom, an ancient cluster of disparate ethnicities sharing culture, including, crucially, an appetite for sticky rice (khao niaw). In fact, here in the truck, Da is carrying a huge gaatip—a finely woven drum-shaped basket with a tight lid to keep the heat in—filled with cooked sticky rice for our lunch. Even though we could order it at the floating restaurant, Da prefers to bring her own. We’ve been staying at his mother’s village on the outskirts of Ubon. (The book’s photographer, Eric Wolfinger, will meet up with us later, in Bangkok, where we’ll all catch a plane for Luang Prabang, the capital of northern Laos.) The meal today is a family party in honor of Songkran; it’s also a welcome home for James. We’re a caravan: three of us turning off the highway, making a sharp turn under a bridge to hairpin onto a road that skirts the muddy river Mun, flanked on the other side with shiny river plants, trees, and shacks with rusted metal roofs. James’s cousin steers onto a high bank, the parking lot for the floating restaurants that coexist here, side by side.

Like riverweed, floating restaurants drift lazily along stretches of the Mun and Mekong. Each is a series of bamboo platforms anchored to the shallow bottoms near shore. At some, you wade or paddle out to the platform you fancy; others—like this one—link the platforms along narrow bamboo gangways kept afloat on plastic barrels, on which young servers ferry dishes to customers from open-air kitchens on the bank.

James’s uncles choose a platform big enough for us, a party of 20 or so. It’s cool under its thick covering of coconut thatch. Saats, woven nylon dining mats, cover the platform. We flick off sandals and flip-flops; we sit. One of James’s nieces—maybe 15—listens as everyone calls out the names of dishes. She makes a pencil mark next to them on the printed order sheet and hands it to the server. The dishes arrive: large deep-fried river fish with frizzled fins and edges to gnaw that release a delicious, palate-coating residue of cooking oil and fish; tum som (green papaya salad) in a sweet, hot, and slightly tannic dressing, dark from fish sauce and the cloudy-brown fermented fish paste called padaek. On the path from the parking lot we’d seen a woman on the riverbank roasting chickens, spiking raw birds on prongs in big metal saucers covered with the smoldering ash of dried coconut husks. She covered them with metal oil tins with the bottom cut out—an impromptu oven. The flesh of the breasts was slashed so you could drag pieces off by hand, no hacking with a cleaver required. It’s fantastic: the gamy flesh of active farm birds with a sweet-smoky overlay of coconut. The dipping sauce has lime juice, fish sauce, pulverized toasted rice, and powdered chile.

The niece who ordered has been respectfully serving me: refilling my beer, popping new ice cubes into my whiskey-soda glass, passing me the basket of sticky rice. There’s a covered bowl on the saat before her. I hear a scream. She’s lifted the lid, unprepared for what’s inside: the dancing shrimp (goong ten)—tiny, stone-gray shrimp fished from the river we’re floating on, writhing furiously in a chile-paste bath. Uncles and aunts laugh; cousins console her. “Just take a little,” James tells me, spooning a few of the shrimp on his plate. “It’s the pollution in the river,” he says. “You don’t want to take any chances, eating live shrimp.”

I scoop up a few in a flattened ball of Da’s sticky rice. They’re delicious, or the chile paste that coats them is. The girl has stopped crying, though tears still streak her face in trails that catch the light bouncing off the river. We’re all—even me, shifting my long legs on the saat to try to get comfortable as one of James’s uncles passes me a pitcher of milky, homemade rice wine—part of the landscape now, anointed by flowers, fish oil, and risk.

BBQ chicken is everywhere on the streets and in the markets of Isan. You can smell it from afar, like a smoke signal commanding you to come and eat. Chicken, roasted or barbecued, just spells comfort. It’s easy and delicious. And with gai yang, sticky rice, and tum som, you’ve got a complete meal.