Get a free recipe
Subscribe
What Is a Flat White, Exactly? Nobody Knows.
By: Mari Uyehara Photos: Lizzie Munro 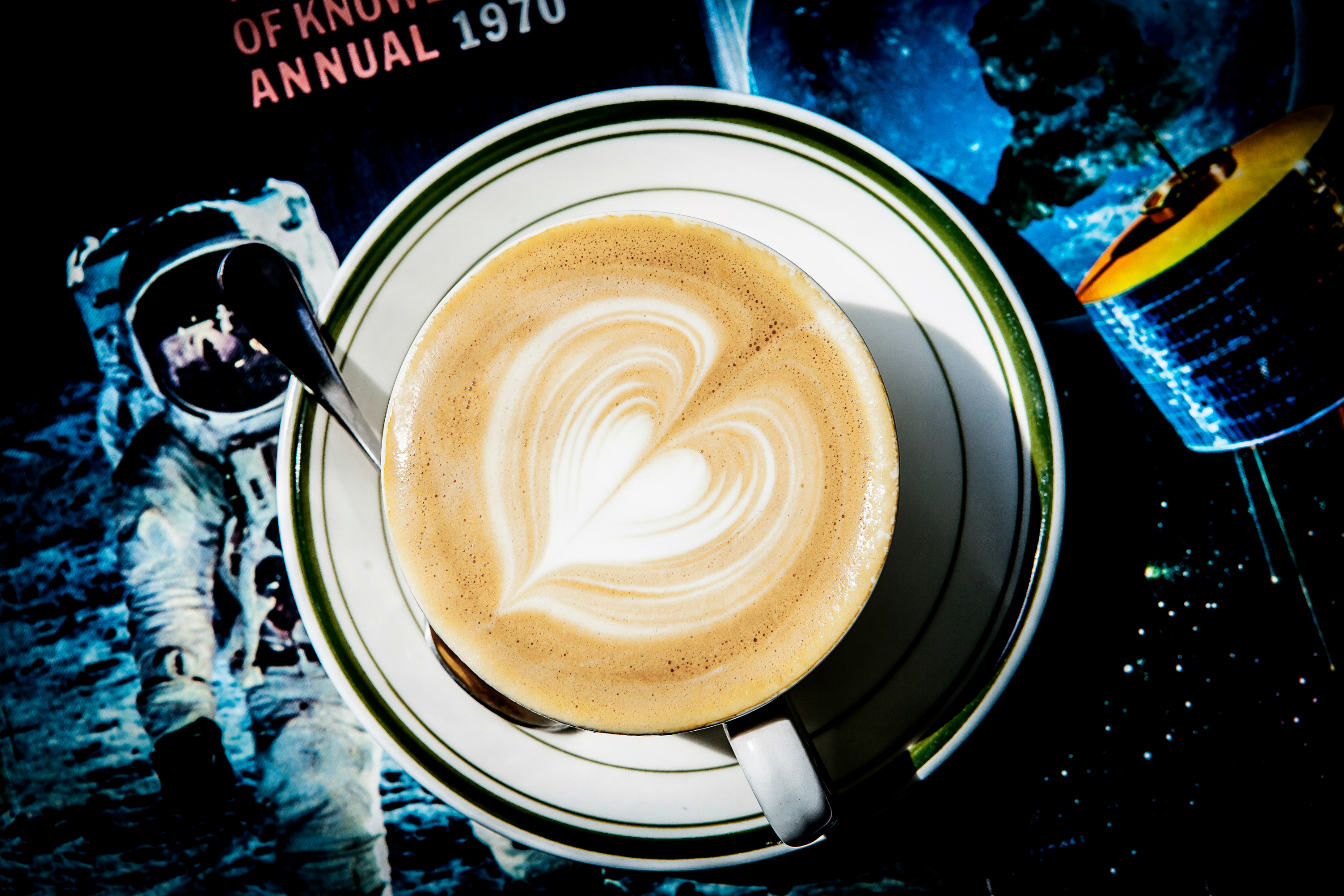 It’s not a cappuccino, latte, mocha, or cortado. But the story of the popular coffee drink goes well beyond a name.

Several years back, I was hanging out in a geeky Manhattan coffee shop. You know the sort—serious baristas concentrating on an espresso shot like a high-stakes chess match, bags of coffee beans with descriptions noting the single-farmer lot from the Eastern Highlands of Papua New Guinea. It typified third-wave coffee, the artisanal movement that started gaining steam in the last decade—promoting latte art, highly trained baristas, light roasting, and nontraditional brewing methods (like the Chemex pour-over). While I was sipping on a very good cappuccino, a woman came in and ordered a “flat white.” After the door closed behind her, I leaned in and asked, “What is a flat white, exactly?” The barista shrugged. “No one knows. I just made her a cappuccino.”

In the world of third-wave coffee—where regionally sourced beans for a pour-over are measured to the gram and precision is practically religion—it seems that making a drink by the book would be a no-brainer. But the definition of a flat white, as it turns out, is less stable than you might think.

While not entirely new, the flat white is something of a newish phenomenon in the United States, where coffee menus at small cafés haven’t changed all that much for decades. In the ’90s, I worked in a properly independent coffee shop called the Thirsty Mind in western Massachusetts (it sold local art, used books, and kibbeh). We offered the same espresso menu you’d see in most cafés today: cappuccino, latte, mocha, cortado, macchiato, and plain ol’ espresso. The flat white, which came out of the coffee scene in Australia and New Zealand sometime in the 1980s (its exact origin story is much contested, and both countries have laid claim to inventing it), hadn’t yet made it over.

The flat white trend started burbling up in the U.S. long after I’d pulled my last espresso shot as Australian cafés, like Toby’s Estate, started to open up. In 2012, Bon Appétit hailed the flat white as “the new way to order coffee,” and then two years later, in 2014, urged its readers to “meet the flat white, the coffee drink taking the U.S. by storm.” That same year, Vogue dubbed it “our latest coffee obsession,” the author self-flagellating for not previously knowing what this hot new drink was. As with all fashionable obsessions, the flat white’s rise to ubiquity was swift. By 2015, Starbucks had scraped up the trend and put the drink on its own menu, alongside the pumpkin spice latte and the caramel Frappuccino.

Despite all the noise, some American cafés never hopped on the bandwagon. At one of New York City’s best coffee shops, Everyman Espresso, owner Sam Penix says they started getting a lot more requests for flat whites after Starbucks came out with them. “We’ve been making flat whites for ten years, but we call them cappuccinos,” he jokes, calling the drink an invasive species. “It doesn’t need to be here, and it causes confusion between us and our customers.”

In Penix’s mind, all espresso drinks are made with the same ingredients, and any variance is accounted for in the ratio of milk to espresso. That’s because one of the main differentiators of a flat white is said to be “microfoam,” as opposed to the more old-school foam with big bubbles. Most third-wave shops already use microfoam, a prerequisite for latte art, so the flat white offers little differentiation from the cappuccino. It’s a different story at Starbucks, where that frothier, big-bubbled foam is the general rule; a flat white made with microfoam is different from the cappuccino on their roster.

Out in San Francisco at the coffee roaster Four Barrel—one of the city’s first establishments, along with Ritual and Blue Bottle, to focus on latte art and ethical sourcing for their beans—the house foam style is a little foamier than its competitors, but not close to the level of Starbucks. When customers order a flat white, they make a cappuccino with a little less milk and slightly less foam. “We’re in the business of splitting hairs,” admits founder Jeremy Tooker with a laugh. And in truth, he had trouble sussing out the flat white’s distinct qualities when he visited the drink’s homeland. “I went to Melbourne several years ago and ordered both a cappuccino and a flat white,” he recalled of a visit to a well-respected shop. “The flat white came in a glass, and the cappuccino came in a ceramic. They were very similar in proportion and strength. I asked the barista what the difference was, and they said they pulled the shots differently, but I couldn’t really tell the difference.”

There is at least one American coffee shop that pinpoints the details of the flat white more specifically. “The ratio we use is directly influenced by our friends in Australia and New Zealand,” Gregory Alford of Houndstooth Coffee, a chainlet of über-serious cafés in Texas, tells me. At Houndstooth, the temperature for steamed milk is defined for every damn drink: For a cappuccino, it is heated to no more than 145°F, and the cortado no more than 130°F. Starbucks, by comparison, doesn’t codify temperatures for its drinks, but the way they steam the foam for cappuccinos comes out to about 165°F. At higher temperatures, the lactose (essentially sugar) in the milk cooks off. The Houndstooth flat white is what Alford calls a “strong flat white” because it’s made with two ounces of espresso and four or five ounces of milk, whereas a more traditional flat white is made with the same amount of milk but only one ounce of espresso. They steam the milk to under 160°F, so it’s an ever-so-slightly less sweet espresso drink. Got that? Still, even Nicholas Curnow, co-owner of the Australian-inspired coffee shop Little Collins in New York City, grants that most of his American counterparts “are not wrong” about the thin line between the flat white and a cappuccino in this country. “Traditionally, a flat white is six ounces and the milk is steamed in a different way,” he says. “When I was growing up in New Zealand, cappuccinos were more foamy than flat whites. They have more foam that domes. And old-school Italian shops dusted them with chocolate.” The flat white evolved as Australia and New Zealand’s answer to a nonfoamy, nonchocolaty cappuccino. At Little Collins, they make cappuccinos with a little more aeration than most other nerdy coffee shops, but not quite as much as in Australia, and their flat whites are a little wetter than their cappuccinos.

What a lot of Americans miss is that the drink isn’t a magically unique entity, but largely defined by its small size. “When customers ask for a large flat white, we’ll first tell them we only do one size,” says Curnow. “But sometimes people will say, ‘Oh, I get a large flat white from here or there.’ We don’t want to be uptight, so we’ll say, ‘We can do a large with foam like a flat white,’ which is really just a large latte.” The myth of the large flat white has persisted because coffee shops are hesitant to go full Portlandia coffee snob, correcting their customers on the definition of what they’re ordering.

“You lose a lot in translation,” Alford suggests. “We’re acclimated to larger portions, so when customers get the flat white, the reaction is ‘This is small and cute, but I’m confused—I wanted to sip on it for three hours.’ So what you see a lot of cafés doing is serving a large flat white, which is to say an American latte.”

So as it turns out, the flat white is basically a cappuccino in some coffee shops, something very different than a cappuccino in Starbucks, something like a cappuccino with a little less milk in other cafés, and an espresso drink with milk heated just under 160°F in a few locations in Texas. And if you want a large flat white, well, that’s a latte. It all makes you wonder whether ordering whatever glossy magazine tells you is the “it” coffee is a smart thing to do after all.