Get a free recipe
Subscribe
The Fizz That Time Forgot
By: Devra Ferst Illustrations: Lisk Feng 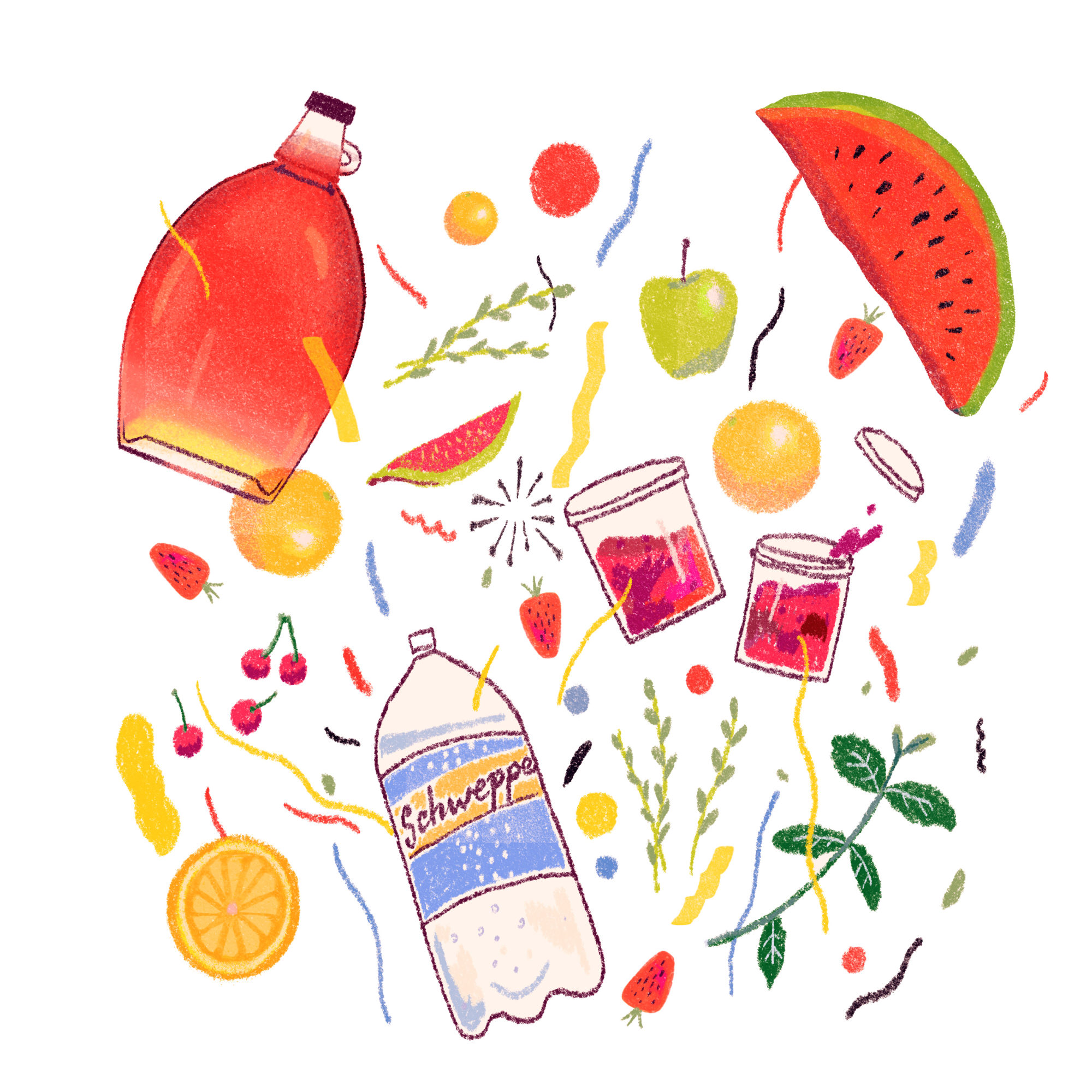 Sweet, bubbly, and chemically colorful, gazoz quenched Israel’s thirst for much of the 20th century. Now, thanks to a new generation of chefs and tinkerers, it’s being reimagined for a new generation.

It’s a hot and sticky August day in Tel Aviv when I reach the Levinsky Market. I’m lost, so I wander until I spot them: a cluster of people carrying plastic glasses of pastel-hued soda decorated with small bouquets of herbs. The stream of bubbles and flowers originates at a kiosk barely big enough to hold its two staffers. Officially, the shop is called Cafe Levinsky 41, but some refer to it as “the Susita place” after the vintage, Israeli-made white micro-truck that’s parked outside. Others just call it the shop owned by the crazy guy.

“People call it the way they remember it,” says owner Benny Briga, the crazy guy in question. Personally, I think of the kiosk in terms of its signature drink, which is what has brought me to the market: To me, it’s simply the gazoz shop.

Gazoz is, at its core, a mixture of soda water and sweet fruit syrup that can come in artificial electric colors in flavors like raspberry, orange, and grape. Almost a sparkling bug juice, it’s a fizzy antidote to the country’s sweltering summers. But a glass of gazoz is more than just thirst quenching: It occupies a deep place in the Israeli psyche. “For me as an Israeli, it [carries] so much memory,” says chef Einat Admony. Waxing nostalgic and almost giddy at the mention of the name, she jokes: “It’s my next restaurant name.” Today, both personal and cultural nostalgia for the drink have driven a small group of gazoz makers to reinterpret and revive it.

According to Admony, Tel Aviv’s first gazoz kiosk opened in 1911 on Rothschild Boulevard, one of the city’s most desirable addresses both then and now. By the 1950s, says Briga, “it was the biggest drink on the street,” served even during Israel’s austerity era shortly after the country’s founding, when little value was placed on deriving pleasure from food. But the passion for gazoz shops faded during the latter half of the 20th century, and it became something you made in your own kitchen with a soda siphon, or not at all.

“If you went to somebody’s home, that’s what they would give you,” recalls cookbook author Joan Nathan, who lived in Israel in the 1970s. Kids growing up on kibbutzes would take bottles of syrup and mix gazoz by the soda fountain in the communal dining room; in the 1980s, when Admony was serving in the Israeli military, it was a staple on the base. But the rise of Soda Stream, the Israeli-made home seltzer apparatus, and Coca-Cola, which bottled its first Coke in Israel in 1968, pushed the drink out of the public spotlight. “And then it almost disappeared,” says Briga. The memory of these older versions of gazoz—intensely sweet, made from artificial ingredients, and poured in neon hues—stuck, but they were a far cry from what Briga serves today. “Everyone knows the word ‘gazoz,’ but they expect something very different from what I’m doing,” says Briga. His shop, like its moniker, is hard to pin down: It’s part café and part laboratory, its walls lined with glass jars of fruits and herbs in various stages of fermentation, illuminated from behind as if by lightboxes. During my visit, I spot whole lemons floating to the top of a jar, chiles steeping in a fiery elixir, pulverized ginger, and metal buckets of fresh herbs like sage and thyme on the counter next to a small tower of pastries. Other days there are fermenting pomelos, juniper berries, myrtle, cardamom, and clementine. “We don’t have a menu; we have the season,” Briga explains. Each drink he makes is different than the last.

Briga didn’t set out to revive gazoz; he originally opened Levinsky 41 as a coffee shop. It was tour guides visiting the market, looking to give visitors a taste of a bygone Israel, who first asked him to make the drink. Having worked as a professional cook, Briga couldn’t bring himself to serve artificial ingredients. Instead, he gathered herbs and fruits to brew and ferment, approaching the drink the same way he constructed a dish in a restaurant. “After a few days, I realized how it was supposed to be,” he says.

When I order a gazoz, a woman behind the small counter spoons syrups and macerated fruit into a glass: apples that still have a touch of crispness, soft Italian plums, grapes, and ginger. She tops them with soda water and finishes the glass with trimmings from community gardens: edible geranium, thyme, and limonit, a form of lemongross popular in Israel. The limonit is fragrant, and the fermented plums leave my mouth tingling; it’s the local terroir captured in a soda glass.

I ask Briga how he decides what goes into each drink. “I don’t know; it just happens. What I have on the shelf is what I have. If they are all together, they will probably like each other, so we are playing,” he says, speaking of the jars as if they are children in a classroom. As I drink my gazoz on the bed of the truck, which doubles as the café’s seating, a line starts to form; five years after Briga opened shop, his talent is no longer a secret.

Today, both personal and cultural nostalgia for the drink have driven a small group of gazoz makers to reinterpret and revive it.

Elsewhere in Tel Aviv, chef Eyal Shani serves gazoz at his popular restaurant Miznon, where it accompanies the meat-stuffed pitas and roasted cauliflower heads he’s known for. His rendition sits somewhere between Briga’s and the drinks of past generations, mixing seltzer with a syrup from a small producer that comes in flavors like apricot, raspberry, apple, and grape. Shani just opened a branch of Miznon in New York this week. The opening menu appears to be gazoz-less, but the drink may be added later, a representative says.

If Shani serves it in New York, he won’t be the first. Gabriel Stulman just debuted a lemon verbena and a grape shiso gazoz at his new all-day restaurant Studio in the Freehand Hotel in Manhattan. Instagram shots of Briga’s gazoz caught the eye of Danny Nusbaum, the chef and owner of Golda, a Middle Eastern–leaning restaurant in Brooklyn. Nusbaum grew up in New York but remembers the drink from regular visits to see family in Israel. The bottles of syrup were always in the house, he says, ready to be mixed with soda for gazoz or flat water for punch.

“I couldn’t do exactly what he’s doing,” Nusbaum says of Briga’s laboratory, which requires constant tweaking. But the idea of reinterpreting gazoz offered a solution to a problem in his restaurant: how to use up the fruit that was too ripe for pastries. He started to make juices topped off with soda, a gazoz that bubbles but is denser than the classic.

Late last summer, Nusbaum made a variety with Concord grapes and thyme, slices of persimmon, and pomegranate arils. On another day, there was lemon verbena and plum juice with sliced plums and pears. As at Briga’s shop, there are no decisions for the diner to make. The flavor is determined by “whatever [fruit] we have on deck that makes sense,” Nusbaum explains. “It’s never the same.”

Unlike so many foods that have been “revived,” their makers going back to time-consuming methods of cooking, there’s no culinary tradition for gazoz makers to return to. Instead, its new makers are pushing the tradition forward by using fresh and fermented ingredients. But can these modern iterations still lay claim to the title of gazoz? Admony thinks so. For her, the idea is captured by the name more than the desire for a bubbling Technicolor beverage. “It’s not the gazoz [Briga] or I grew up with,” she says of Cafe Levinsky’s creations. But as chefs (and perhaps as Israelis, too), “we want to bring back something we slowly forgot.”

Devra Ferst is a freelance food writer, editor, and cooking teacher based in New York City. She takes her cheese shopping very seriously and knows a good babka when she sees one.