Crack open any cookbook and you are confronted with a daunting collection of recipes. If you are actually going to make something (and it’s OK if you’re not!), choices need to be made. In First 3, we set out to test a few standout recipes to get a feel for the book. This is not a review of the book (we don’t really do that here), but rather, a firsthand experience of breaking in a new cookbook at home.

In Lucky Peach’s latest book, Power Vegetables!, author Peter Meehan ushers in a new era of vegetable worship. From the very first off-kilter image—tubers hooked up to wires in a Dr. Frankenstein moment—Meehan, who also edits the quarterly, wants you to know that vegetables are anything but boring if you treat them right. Throughout the 264 colorful and joyful pages, you’ll see things like tiny figures skiing down slopes of carrot cake frosting instead of snoozy pasta recipes. This book isn’t as serious as a Deborah Madison tome. Expect a side-eyed sense of humor at every turn.

To be clear, the book is about the power of vegetables, not vegetables as a having special powers or vegetables as healthy superfoods. You won’t find a recipe for avocado toast here. No way. This is not a book exclusively for vegetarians either, but if you are trying to eat more vegetables, this will work just fine. Meehan offers us practical and flavorful advice about vegetables you can find easily in any market (squash, in all its forms, appears in nine of the recipes, and you’ll find cauliflower and broccoli all over the place). That’s what I like most about this book—I feel supported and respected as a home cook who doesn’t want to traipse all over the city to find squash blossoms.

It’s like Meehan knows that I already love to cook, that I do it almost every day, and that I’m pretty good at it even though I don’t have classical training. He knows that I have a pretty well-stocked pantry, but still he gently suggests I supplement it with Chinese chili crisp, dried fish, and asafetida. True to form, he begins the book with a shopping list.

Titled the “Power Pantry,” the list is meant to dovetail with an already well-stocked spice rack. It’s full of ingredients loaded with umami—a savory flavor found widely in Asian cooking and sometimes called the “fifth taste”—including kombu, dried shiitake mushrooms, miso, and soy sauce. There are capers and breadcrumbs also, which puzzled me at first, but I came to realize that Meehan is taking cornerstone meat dishes and adopting them to make vegetables the star, which requires these kinds of ingredients. This is perhaps most evident in asparagus like a steak and the killer mushroom mapo tofu.

Now let’s get to the recipes.

BRAISED DAIKON WITH MUSTARD
I would venture to say that the daikon radish is to the Japanese as tomatoes are to Italians: ubiquitous. Served raw, daikon is ever so slightly sharp and bitter. Pickled, it has the perfect crunch. Grated, it adds freshness and coolness to meats and fresh. And simmered solo, it’s the star. I thought this dish really embodied the ethos of the cookbook. Take a little extra time, learn a trick here and there, and you’ll unleash the hidden sweet flavor and satisfying crunch of a lowly radish. In a traditional Japanese preparation, the vegetable is carefully cut and shaped and simmered in a mix of alcohol (mirin), fish stock (hondashi), soy sauce, and sugar to build complex layers of umami. The pickled mustard seeds mimic caviar on top, and hondashi (seaweed and fish stock granules) from the power pantry serves as the braising liquid for a dish that I would argue is better than any braised shoulder of an animal.

ZUNI SPICY BROCCOLI AND CAULIFLOWER
The Zuni Café in San Francisco is famous for its roasted chicken and a long menu of beloved vegetables. Meehan adapted this dish from a Zuni Café pasta dish, and I was delighted at the idea of taking three salt-packed Italian ingredients (capers, anchovies, olives) and mixing them with pan-fried broccoli and cauliflower.

I plunged right in. At first I was shocked by the massive scoop of breadcrumbs I’d been instructed to toast—one whole cup. And even after I had spent a good deal of time frying each batch of broccoli and cauliflower, I used about a third of the suggested amount of breadcrumbs to finish off the dish. They simply overtook the vegetables and gave the whole thing a sandy feeling. The last direction instructed me to “serve warm,” but despite having a very large pan, I’d had to cook my vegetables in three batches, ensuring that the first and second batches were no longer warm—but oily and soggy—when it came time for plating. I did warm the entire thing up in the oven before serving, but the vegetables still felt limp. I wanted to love this dish so much, but after standing in front of hot oil frying cruciferous vegetables for 40 minutes, I was over it.

My dining companions, however, begged to differ: They found the dish pleasantly salty, and one described it as “just like something I had in Rome,” so I’ll chalk it up to different tastes. Perhaps my expectations were too high, but I thought there were too many things going on. I would have opted for a bigger dose of acid from lemons or balsamic vinegar rather than a pile of breadcrumbs.

MUSHROOM MAPO TOFU
I’ve eaten the classic preparation of mapo tofu hundreds of times. I’m addicted to the chunks of silken tofu bathed in a greasy pork and Sichuan peppercorn broth, so I was skeptical of this meat-free version. But I am here to tell you that this mapo tofu recipe is worth the price of the book alone. That said, I do disagree with Meehan on one point: It did improve with age. Reheated leftovers gave the bitterness a chance to relax, and the tofu became even softer.

My kitchen scale got the curb treatment during my last apartment move, so I was a little frustrated that the dry measurements are listed only in grams. My fresh shiitakes came in a preweighed package, so I used that as a reference point, but a little hint about measurement (2 cups or about 15 mushrooms) would have been helpful. Meehan says “finely chop the fresh and dried mushrooms with a cleaver, knife, or mechanical food chopper of some sort,” so out came my trusty four-cup mini food processor, which is probably my favorite kitchen tool.

The leeks, which get stir-fried with the mushrooms alongside ginger and garlic, looked so beautiful sliced in a bowl I just had to document it. In the pan I used more than the specified three tablespoons of oil and needed to double the overall cooking time.

This is a dish where vegetables truly take the place of meat. The dried, flavor-packed shiitake mushrooms replace the crispy bits of pork. It’s not as greasy as its traditional counterpart, but the interlocking flavors of Sichuan peppercorns, bright Korean chili powder, and oily chili crisp happily erased the memory of pork entirely. Just make sure you serve this with an extra heap of chili crisp sauce.

MAKE AGAIN? Yes, likely once a week for the rest of my life.

Though there are a few missteps (like the ultra-bitter pipián rojo recipe), I love this book. There are countless recipes I’m itching to try. I’ve always wanted the tempura green beans recipe from New York’s legendary Red Cat, and here I found the recipe. Other recipes I’m eager to tackle: the Momofuku Nishi sweet potato, a Mediterranean rice and herb dish called spanakorizo, Sichuan squash stew, and the McAloo Tikki Sandwich. As a lifelong vegetable lover and someone who has identified herself as everything from macrobiotic to paleo, this book refocused my thinking. Vegetables shouldn’t be treated as supporting acts and should never, ever, be bland. With Meehan’s help, there’s no reason to ever eat “just steamed vegetables” again. 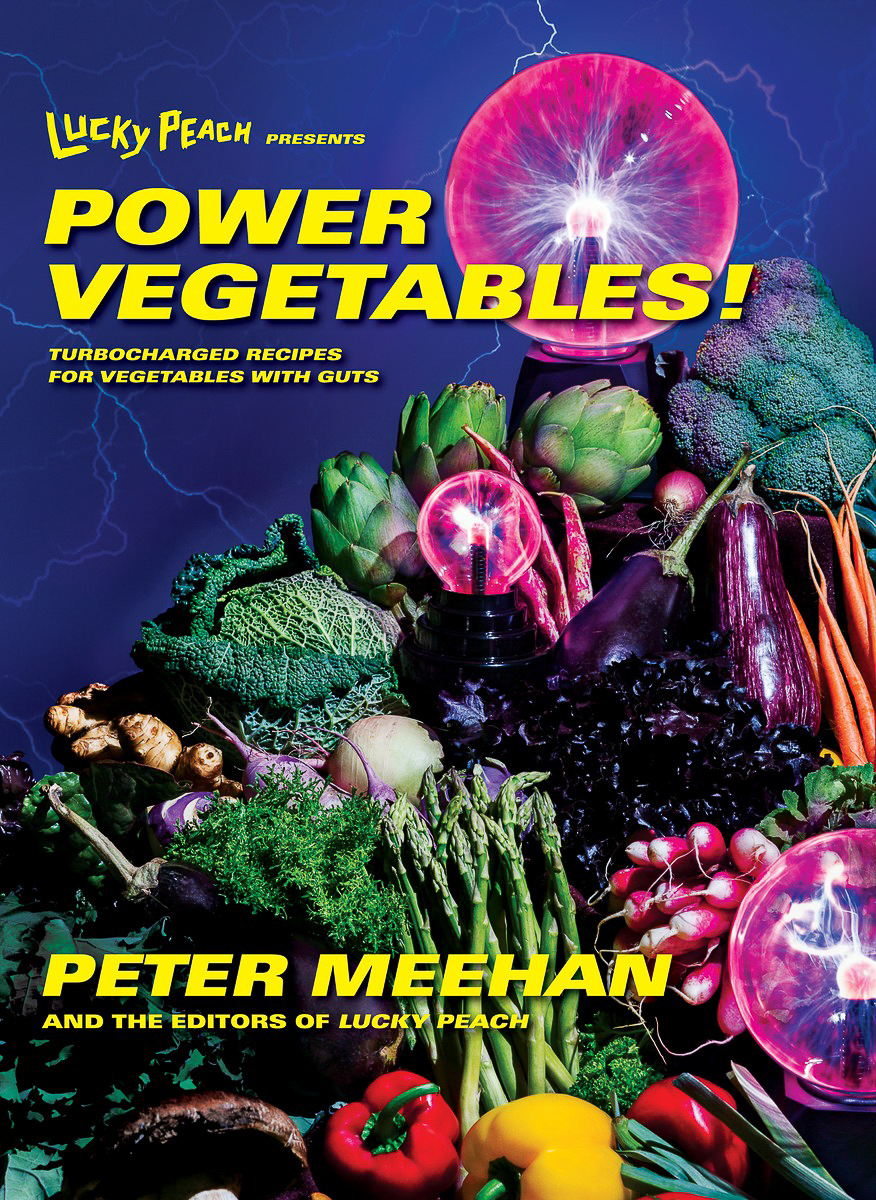