Get a free recipe
Subscribe
A Farewell to Fukuoka’s Street Food
By: Hannah Kirshner 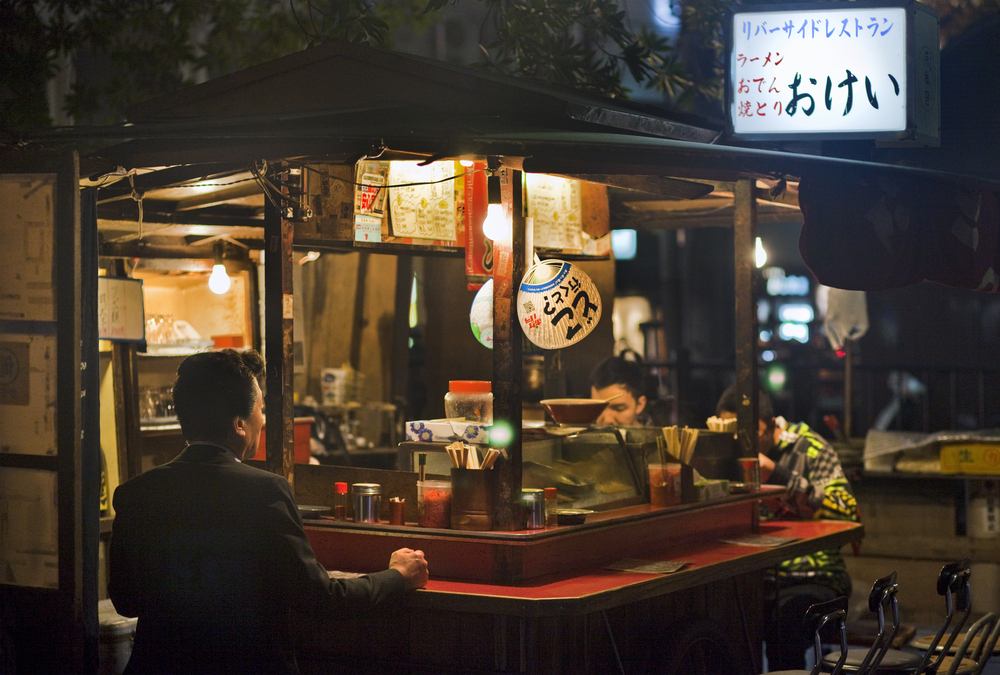 Due to changing tastes and governmental regulation, Japan’s famous yatai culture is disappearing.

Fukuoka, on Kyushu, Japan’s southernmost island, has a laid-back and quirky charm like San Francisco before the tech boom. The street stalls that have all but disappeared everywhere else in Japan, called yatai, are clustered near the city’s main train station and in its upscale Tenjin neighborhood. They line the river in Nakasu, their red paper lanterns swaying in the breeze on a warm June evening. Nakasu is a district of pleasures, both gustatory and carnal: not only slick noodles in milky pork-bone broth, but beautiful young men and women whose services range from companionship to a happy ending.

It is these street stalls—the last hundred of them—selling skewers of grilled chicken skin and rounds of daikon simmered in fishy broth that are threatened by the city’s efforts to modernize. In 1994 the local government enacted a rule that yatai could be passed down only one generation. After that, the city can decide whether to open the permit for the spot again or clean up the space for another use. Once there were 400 yatai in Fukuoka; now less than a quarter of those remain, with at least a dozen going out of business each year.

Though the reputation isn’t always fair, the yatai are notorious for catering to drunks who spill grease and trash into the street—its stench polluting the morning air—and for ripping off naïve tourists with weak drinks. But these tiny outdoor restaurants offer a taste of a more chaotic and gritty Japan that’s nearly lost to history. I don’t mind being poured a highball barely tinted with whisky if it means I can stay sober long enough to eat charcoal-grilled shiitake mushrooms or saucy fried noodles at a few more yatai. The sun hasn’t yet set, and most of the customers in Nakasu at this hour are not revelers. At Donryu, or drunken dragon, professional hosts—who will spend their evening flirting for pay in a host club—slurp bowls of Hakata ramen before their shift. Donryu’s 75-year-old proprietress, whom customers call Mama, gripes with undisguised prejudice about how most of the customers these days are Chinese and Korean tourists.

A few stalls down, the line for Takechan is already forming. I eavesdrop on two salarymen in their 20s. For them, indulging in these famous gyoza is a wild weekend-only activity: “You can’t eat gyoza on a weekday because your breath will stink like garlic at the office,” one says to the other, who nods seriously in agreement. Gospel music from a wedding reception drifts across the river, and a couple of fashionable young ladies join the line.

The yatai have hinged eaves that fold down when they close, turning the shops back into boxes, but when they’re open, each feels like its own little world. The counter at Takechan, less than a foot wide, wraps around three sides of the stall. We slide onto a narrow bench elbow-to-elbow with other guests and pick up an uchiwa (the paddle-like paper fans handed out everywhere during the humid Japanese summer) to keep cool. This yatai is longstanding enough to have a sink and a refrigerator, plastered with business cards from important customers and suppliers. A large man makes small gyoza, deliberately and efficiently pinching them closed around white filling flecked with green nila (garlic chives) and neatly lining them up on a tray. He works beside his elderly parents, but this business will end with him. He picks up the gyoza four at a time between the fingers of one hand and drops them onto a hot griddle. When it’s packed with a few dozen dumplings, he floods the griddle with water and covers it. This way, the gyoza come out crisp on the bottom and evenly steamed through—too hot to eat but too seductive to resist. We dip them in a sauce of sweetened shoyu and vinegar, adding yuzu-kosho, the citrus and chile pepper paste Kyushu is famous for.

The gyoza’s remarkably thin skin, crisped golden on two sides, yields to a creamy filling that’s sweet with gently cooked garlic, meaty-tasting but soft as butter. Each yatai competes with its own slight variations on classics, but these are unlike any gyoza I’ve ever had. We ask the older man, who’s serving drinks, what’s in them. “It’s a family secret—you have to work here to find out.” So I inquire, only half joking, what time I should come in the morning so he can put me to work, but he brushes me off gruffly.

A moment later, he reveals that the gyoza (usually filled with ground pork) are 90 percent vegetable. And then, while passing beers and highballs across the counter, he tells us, “It’s onion.” As we savor the last bites, he admits the other 10 percent is meat—though what kind or cut he won’t reveal. I suspect it might be fat from the pork they stew for ramen. There used to be yatai like these all over Japan. They proliferated in the wake of WWII—as the impoverished war-torn country rebuilt itself—and then vanished in the boom years, when Japan reinvented itself as modern, clean, and high-tech. Everywhere but Fukuoka, you will find them set up only during festivals, where they pop up for a few days—not unlike American carnival vendors with their elephant ears and sausages.

Over in the Tenjin neighborhood, near the big department stores, the yatai cater more to locals. But it’s easy to see why the city wants to sweep out weathered street stalls, refreshing its image as oshyare (fancy, trendy) condos rise up around them. The city has issued a few permits to new yatai—one run by an expat serving French cuisine, and another I recall having counters made of salvaged-looking wood, powder-coated metal stools, and charcuterie on the menu (a formula familiar from Brooklyn to Berlin)—but the overall numbers are still dwindling. Across the street, Kokinchan, famous for its yaki-ramen (they didn’t invent fried noodles dressed in tonkatsu broth and a sunny-side up egg, but they perfected it) has held on and is so busy that they take reservations.

For now, you can still find stalls scattered throughout Fukuoka selling yakitori, oden, and ramen—feeding tired salarymen in the evening and drinkers late at night. But this may be the generation that takes those recipes—the little things that set apart their gyoza or yaki-ramen—to the grave.

Japan’s last standing year-round yatai (street stalls) in Fukuoka distinguish themselves with slight variations on street-food classics like oden, yakitori, ramen, and gyoza. One place might put more nira in their gyoza, another more garlic. But the gyoza at Takechan, a multigenerational family operation, taste unlike any I’ve had elsewhere: The crisp and tender wrapper yields to a garlicky-sweet silky filling made mostly from onion and a gloss of pork fat. The owners won’t share all the details of their secret recipe, but they did give me a few clues. Dozens of onions (and tears) later, I’ve come up with a recipe that’s really close.

A few notes on ingredients. Aji-no-moto, yuzu-kosho, nira, and gyoza wrappers are available from Japanese grocery stores (the dumpling wrappers at other Asian groceries may be larger and thicker). Fatback is available from most butchers, often frozen. I imagine you could substitute the small amount of fatback with a vegetable shortening and some extra seasoning to make a vegan filling, but I have yet to try it. These can be made ahead and frozen, then pan-fried right out of the freezer.