Get a free recipe
Subscribe
What to Expect to Eat When You’re Expecting
By: Naomi Tomky Illustrations: Simone Noronha 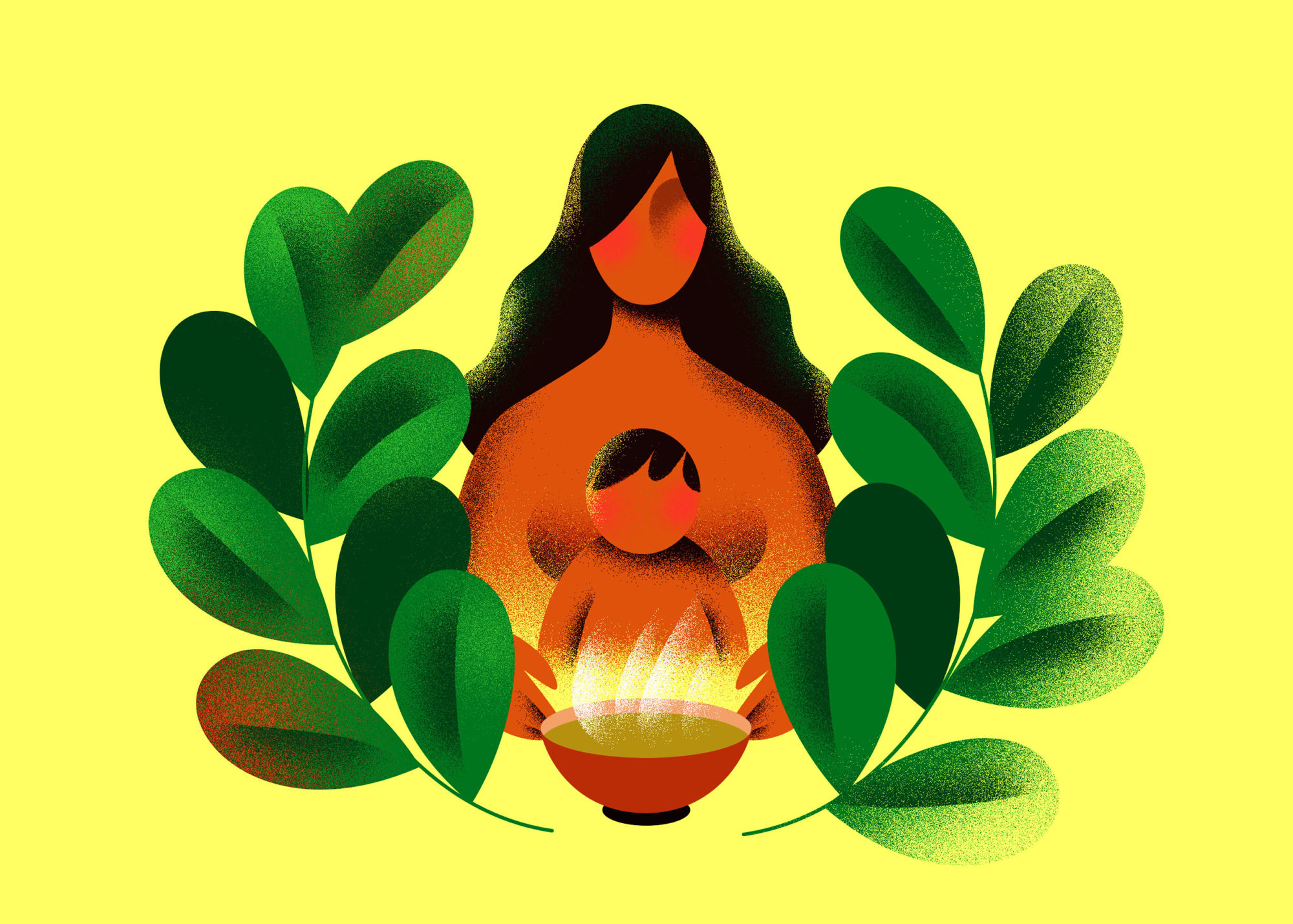 In the United States, postpartum medical care is minimal. Increasingly, women are looking to family recipes with healing properties, from moringa to barley porridge.

When Gemma Vaughn Cholewa wrote out her birth plan, she wanted to include a meal for herself and the midwives assisting her. She started looking for moringa, the vegetal green that she needed to make tinola, the curative soup that women in the Philippines often eat after birth to help recover and encourage milk supply. “It was in regular rotation in my house growing up,” Cholewa recalls. But until a midwife suggested it, she didn’t realize its unique relationship to giving birth. She jumped on the idea right away.

Throughout the world, mothers are given specific foods to consume after they give birth—to increase milk production and to help them recover physically. There’s seaweed soup in Korea, barley porridge in Ethiopia and Eritrea, pig foot soup in Laos, and a whole menu of foods, including chicken in black sesame oil and papaya-spare-rib soup, in China. In the United States, women belonging to these cultures, even ones who may be otherwise adrift from traditional cultures, often return to the foods after they give birth.

After the births of each of her first three children, Leslie Hsu Oh, a travel writer who happens to also have a public health degree from Harvard, struggled to eat well. “A lot of times we’d just get takeout or fast food,” she recalls. But when her fourth was due, she decided to experiment with the Chinese tradition of “sitting the month”—where the woman stays home for 40 days after giving birth, with no visitors, eating specific foods and wrapping a stretchy cloth around the belly. Hsu Oh did this, in part, by subscribing to a service that sent her traditional postpartum foods. Each dish was supposed to help with various aspects of healing after birth. “Pig’s feet are good for breastfeeding, and the collagen is supposed to make skin bounce back,” she remembers. “I appreciated having some thought to what I was eating.” She felt that she made more milk and bonded better with her baby because she was less stressed. “I used to laugh at traditions,” she says.

Aliya Haq knows that these postpartum foods are important. As the nutrition-services supervisor at International Community Health Services in Seattle, she sees postpartum moms from all over the world and incorporates traditions from their cultures into the counseling she offers. In many cultures, pregnancy is considered a “hot condition,” she explains—both in the sense of its effects on the body’s temperament, and literally. Carrying that extra weight and incubating a baby keeps moms-to-be very warm. “When the baby is born, the mom becomes cold.” This is why many cultures have postpartum soups and incorporate “hot” foods such as beef, ghee, chicken soup, and ginger into the diet of new moms. “There is a lot of sense in this,” she says of the traditional beliefs. Nutritionally, she points out, most of the foods are high in fat, iron, and protein, all of which help new moms recover. But some of the foods even go beyond that: Scientific research shows that within seven days of eating moringa, the main ingredient in the tinola Cholewa wanted to make, mothers produce a significant amount more milk than without. But more than anything, Haq underlines the tradition of rest and care—like the “sitting” that Hsu Oh did—for new moms. “It’s wrong to think that after the baby, [the mom] just goes back to normal.”

That’s a prominent thread in Like a Mother: A Feminist Journey Through the Science and Culture of Pregnancy, by food writer Angela Garbes. “How a person gives birth—emergency C-section, unmedicated vaginal birth, etc.,” she finds, when it came to their reflections on the experience, “mattered less than how they felt cared for.” She’s seen the rise in interest in traditional postpartum foods and attributes it in part to the lack of care provided to American women after they give birth. Both the U.S. medical system and society turn their focus to the health of the baby, often leaving the mother without the resources to help and care for herself. Says Garbes: “You’re like, ‘What am I doing? I’m a physical wreck.’”

Both the U.S. medical system and society turn their focus to the health of the baby, often leaving the mother without the resources to help and care for herself.

So the women turn to traditional curative diets, something Garbes notes is often considered mutually exclusive from Western medicine—but doesn’t need to be. “Food is much more than food,” she explains. “Food is one of the many ways we express love and affection.” She’s a big fan of “meal trains,” where friends bring food to new moms, mentioning that a Korean friend of hers brought seaweed soup, telling her it would heal her insides. More scientifically, the iodine in this dish has been helping prevent postpartum thyroid dysfunction in new Korean moms since around the 10th century. “You might not feel the immediate effects, but you feel taken care of,” she says, acknowledging that “it’s not a substitute for postpartum care”—medical check-ups, necessary rest, and tending to any physical trauma from birth.

Women in the U.S. often leave the hospital unprepared to care for their own postpartum body, not to mention doing so alongside caring for a baby—much of the time with little or no help as partners return to work and family is far away. They don’t have the resources to relax and tend to their body as the Indian, Chinese, and other traditions allow with their isolation periods. Many women need to go back to work almost immediately, without the rest their body needs. “It affects the baby” as well as the mom, notes Haq. “If I had any say, I would call for more leave for mom, more care for mom.”

So while eating the right things can’t replace that kind of rest and care, these culinary traditions are rooted in medical reasoning. Atlantic writer Hannah Giorgis had something of an epiphany about genfo, an Ethiopian thick barley porridge, while reading Elizabeth Alexander’s The Light of the World. The author describes her Eritrean husband’s family feeding her ga’at (the Tigrinya word for genfo) “to saturate the mother with iron after childbirth and repair her uterus.” Giorgis, whose mother’s family is from Tigray region of Ethiopia, had been long familiar with the dish, which as a kid she nicknamed “spicy volcano” for the clarified-butter and berbere-spiced center that gives it flavor, but hadn’t before thought about the nutritional reasons the porridge was eaten postpartum. Even without having a baby, “it’s a really intensely comforting food,” she says, in part because of the laborious process of making it. “It’s not the kind of thing you wake up and make for yourself on a Saturday morning.” In fact, beyond its postpartum traditions, she says it’s something she mainly eats when surrounded by older women, so it’s very much associated with womanhood. “It feels like I’m at home.”

That comfort is something new moms need—for their physical and emotional health—to help recover. The foods serve physical needs with their curative properties and emotional needs with the comfort they give. But beyond all that, it serves as a connection. Just at the baby eats from the mother, the mother looks to the community to mother her, be it friends, aunties, their actual mothers, or even unknown ancestors, as Cholewa discovered when she sought to make tinola: Despite her efforts to locate the moringa, Cholewa learned a classic parenting lesson early on—that nothing goes as planned. Her son arrived 11 days early, well before she made the soup. “The midwives made peanut butter and jelly sandwiches,” she says, laughing at the memory. But even without the physical effects of eating the soup, she says thinking about it and planning to make it “gave me a type of comfort, of confidence going into my birth, to have some aspect of the traditional.”