Get a free recipe
Subscribe
What Ever Happened to the Bread Machine?
By: Tatiana Bautista Illustration: Joanna Neborsky 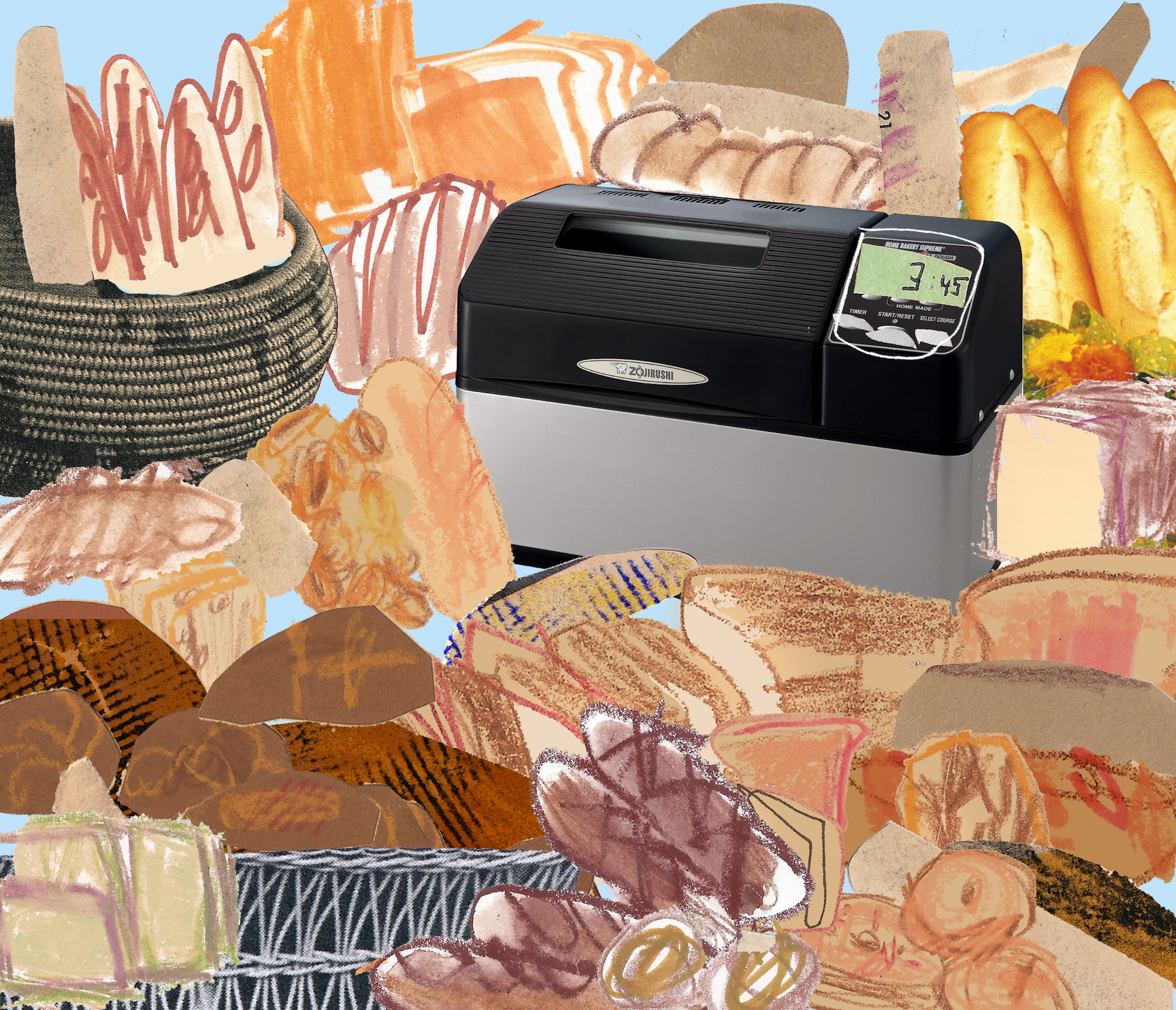 In the ’90s, 25 million Americans had bread machines. Today, they’re starting to come back.

Back before at-home sous vide machines and Instant Pots—before Vitamixes and Keurig coffeemakers, too—bread machines took up prime countertop real estate in millions of American homes. After several decades (and a healthy number of bread backlashes), quite a few of the bread machines we remember from the era have been retired to basements and thrift stores. But we got to thinking: Should we be digging them out and dusting them off?

The one-stop machine for baking bread was first introduced in Japan, in 1986, by Matsushita Electric, now Panasonic. The machine’s popularity spread, making its way into American kitchens throughout the ’90s. Suddenly bread baking, which once seemed laborious and time-consuming, was as simple as pouring a few ingredients into a machine and pushing a button. Once the yeast, flour, and wet ingredients have been poured into the machine’s bucket, a small blade takes care of the mixing and kneading, and the temperature adjusts automatically to rise, proof, and finally bake the dough. The bread machine was slated to be the next toaster, with sales projected to exceed 1 million by the end of 1992.

In 1993, the price tag dropped to $200, which led to over 3 million sales (incredible numbers for a home appliance in a pre-Internet era). By 1999, one in five American households owned a bread machine. But in 2017, nearly two decades later, bread machines are basically nonexistent, having fallen into oblivion along with Walkmans and the Pogo Ball.

Some attribute the demise of the bread machine to the fact that cooks were just disappointed by their results. Lara Pizzorno, the author of Bread Machine Baking, chalked it up to food snobs who regarded the machine as “the electric equivalent of The Bridges of Madison County” in a 1996 article in The New York Times. That is, old and out-of-touch. The shift also coincided with a more recent uptick in gluten-free diets and a widespread fear of carbs.

While cooking trends come and go, the appeal of a machine with a wide range of features is enduring, which may explain a very recent bread machine comeback. Credit can be given to the Instant Pot, which combines a slow cooker with a pressure cooker and a stovetop range. Or the Thermomix—a $1,450 device that can grind, cook, emulsify, whip, steam, mix, stir, blend, chop, knead, weigh, and control temperature. The proof is in the pudding (which you can also make in a Thermomix), with sales of the latter exceeding 3 million worldwide.

Today’s generation of bread machines are moving steadily in this multi-use direction, beefed up with added features, sleeker design, and a lower price tag, starting at $50. They crowd the shelves of Bed Bath & Beyond, as well as search-

results pages on Amazon. Manufacturers like Cuisinart, Zojirushi, and Oster have wised up to the fact that today’s bakers, unlike the home bakers of the 1980s and ’90s, are wary of white bread, and they want to make gluten-free bread, cakes, jams, and doughs. When they use bread machines, health-conscious cooks know exactly what goes into their bread and don’t need to shell out $9 for a gluten-free artisanal one from Whole Foods. Beyond a basic loaf, today’s bread machines can make pasta and pizza dough, noodles, calzones, beignets, cakes, bagels, butter mochi—basically any carb floating out there in the gloriously doughy universe. And to accompany your breakfast rolls, the machines can also make jams, and many have their own dedicated setting, which is essentially a slow-cook function.

The idea of using a bread machine may make some home bakers cringe at the lack of, well, love put into it. But the convenience factor is too tempting to overlook. Blogger Marsha Perry, who has been bread-machine baking since 2005, emphasizes that she avoids making bread fully by hand simply because it is too time consuming. But she uses her machine at least three times a week. Kelly Haffner of Kitchen Gone Rogue still uses the original bread machine her grandmother gave her 20-odd years ago and raves about how the machines can do all of the work for her. Plus, bread baking in a machine still involves a high level of precision and skill; exact measurements with a digital scale are still encouraged. And the best part of bread baking—the aroma that fills your kitchen—is still present when using a bread machine.

If you swear by kneading, proofing, and doing it all on your own, this is not going to convince you to ditch your rolling pin and become a Zojirushi convert. Even Haffner admits that when she uses the bread machine to actually bake the bread, she’s not the biggest fan. “The loaf doesn’t get as large, and it’s not as good as when I bake it in the oven,” she says. She does still use her machine to mix and knead the dough, taking out a lot of the grunt work, before transferring it to a pan to bake in the oven.

The machine has emboldened Haffner and home cooks like her to experiment with recipes like avocado bread and gluten-free brown-rice bread, which aren’t easy to come by at the grocery store. “Until I got a bread machine, I never tried making homemade bread,” Haffner says. “I was intimidated by it.” In the end, the legacy of the bread machine may have less to do with convenience and more to do with bringing bread baking into people’s homes in the first place.