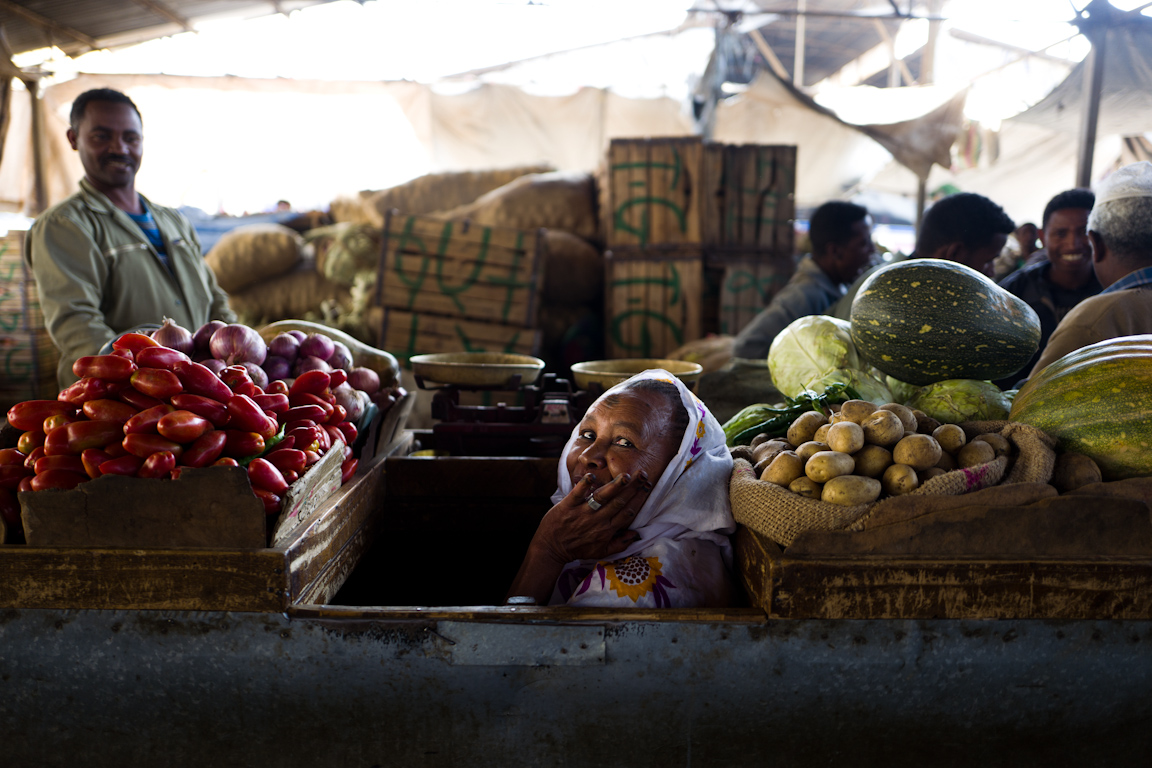 Despite its ties to Italian colonialism, lasagna still occupies an important place on dinner tables in the Horn of Africa, and for immigrants settled in the United States.

At first appraisal, it can be hard to precisely pinpoint the life force of any Ethiopian or Eritrean party. Is it the music, a mix of blaring horns and booming percussion that amplifies the joy of all who have gathered? One could make a strong case for the fashion, too: Even when living well beyond the countries’ borders, Ethiopian and Eritrean people don a stunning, dynamic display of colors, fabrics, textures, and jewelry—both traditional and Americanized—when getting together to celebrate.

But as kitchen doors are flung open by scurrying women, an olfactory alarm gives away the answer. The scent of sautéed onions and garlic drifts toward partygoers, emanating from an ever-changing spread of wot to be eaten with rolls of injera. Some are mainstays—like a vegetarian spread of gomen (garlicky chopped collard greens), misir wot (berbere-spiced red lentils), and atkilt alicha (a mild cabbage, carrot, and potato dish)—but other traditional dishes rotate in. One gathering might call for doro wot, the spicy stew made with both bone-in chicken and boiled eggs. Another might necessitate kitfo, a buttery steak tartare–esque dish served at varying temperatures.

Still, one dish always seems to claim its place at the end of the serving table no matter the occasion.

“At any habesha wedding, graduation, any kind of celebration, you will see lasagna,” says Kibrework Gebre, chef and co-owner of Sheba’s Ethiopian Kitchen in Dallas. “All habeshas I think like to make that and spaghetti—it’s like our other injera.” For Ethiopian- and Eritrean-American people (many of whom use the ubiquitous but historically complicated term “habesha” to refer to ourselves), the Italian dish is just as much a reminder of home as it is a relic of the countries’ colonial history. Italian colonial influence began with an 1896 invasion that led to what is now Ethiopia ceding the then province of Eritrea in order to retain its independence. Italy formally colonized the province but stayed clear of Ethiopia’s capital until Mussolini’s rule, when the European nation returned to invade Ethiopia once more and occupy the country for five years. Disputes between Ethiopia and Eritrea, which are still ongoing despite many shared cultural markers (including, of course, food), are traced back to this Italy-centric betrayal. When Eritrea became a sovereign nation in the early ’90s, the schism was as much about the 19th-century colonial offering as it was about the border itself.

Lasagna, then, is a curious dish to rally around. It’s tempting to make jokes about the ongoing effects of Italian colonial rule, to wonder if our palates are betraying us. But the lasagna served at habesha gatherings is a kind of culinary rebellion, a testament to the transformative connections within our communities. To watch your mother or aunt prepare lasagna is to know there will soon be love surrounding you—and no shortage of people, either. It is a dish that both binds and begets community, the domain of women who rarely receive formal culinary accolades despite their mastery of the craft.

“Ethiopians like pasta, and it’s easier to eat than spaghetti when you have company,” my mother explains when I call her to ask about lasagna’s place at our gatherings. “You can cut squares and serve it to people as a side dish instead of injera.”

While Ethiopia’s experience of Italian subjugation differed from Eritrea’s in its length and political consequences, the culinary impacts on the two countries run parallel: It’s nearly impossible to find an Ethiopian or Eritrean diasporic household where some kind of pasta, tiramisu, or panettone are not served to guests, especially during the holidays. But like any (post-)colonial people, both professional and amateur habesha culinarians have transformed the colonizing nation’s food into something new. Where the original dish combines its eponymous noodles with acidic tomato sauces and soft ricotta, Ethiopian and Eritrean pair the noodles with pungent aromatics, piquant seasonings, and meats common to the region. The sauce begins with a generous portion of garlic, onions, and green onions. Fresh ground beef is typically used instead of Italian sausage, which pork-averse Ethiopians and Eritreans, many of whom adhere to Orthodox Christian or Islamic dietary guidelines, tend to avoid in cooking. The addition of berbere, the countries’ most famous spice blend of dried chiles, fenugreek, garlic, and cardamom, is not uncommon. Some particularly adventurous eaters—myself included, as long as my mom’s not looking—also season the finished dish with mitmita, a saltier, spicier cousin of berbere.

“It’s a little similar to theirs,” Gebre says, pausing for a moment to assess the differences in flavor profiles between Italian and Ethiopian versions. “But I think we use more spice, and it has more flavor than they make it. I like theirs, but I love ours.”

Habesha lasagnas also tend to be more solid, generally retaining their structural integrity even when sliced and served in squares. To break down an Ethiopian or Eritrean lasagna, you need to apply yourself. Because the dish requires a thick, meaty sauce and a relatively conservative amount of cheese, it is firm, yielding only under the pressure of utensil (or an injera-wielding hand, if you are so inspired). Quality cheeses are harder to find in both countries than they are in Italy, which makes our versions more dense and meat-driven than their European counterpart. Ricotta is uncommon, with most habesha home cooks opting for a mix of the more readily available mozzarella and cheddar instead. (It’s also worth noting that a large number of East African people are lactose intolerant.)

Lasagna is a curious dish to rally around. It’s tempting to make jokes about the ongoing effects of Italian colonial rule, to wonder if our palates are betraying us.

But even within Ethiopian and Eritrean diasporic communities, there’s no consensus on how a standard lasagna is prepared. The recipe Gebre shared with me differed from my mom’s, which differed from that of my friend Ruth’s mother. The tweaks here primarily come down to matters of taste and convenience: Gebre uses a bechamel and includes green peppers; my mother mixes some mozzarella directly into the sauce; some families omit berbere entirely to accommodate younger children’s palates. “I wouldn’t call it a regional difference,” says Rahawa Haile, who recently wrote on the topic for Saveur. “More like a mother’s fingerprint.”

And those of us living outside our countries of origin cook lasagna differently than how our relatives back home prepare it.

“I know they use berbere and tomato paste [back home], but I don’t think they use that many spices other than garlic,” Gebre says. “I think we use more spices here to give the meat flavor,” she adds, noting that the meat in the East African countries is naturally more flavorful than what’s available in America.

Even with slight tweaks—berbere quantity, bechamel presence, and the like—there’s something distinctive about the dish as made by Ethiopian and Eritrean home cooks. Something unmistakably warm. Something that tastes rooted in home, even if the seeds came from Italy.

The first time I tried to make it in my own apartment, several states but just one phone call away from my mother, I was overwhelmed. The undertaking felt like a referendum on my habesha womanhood as much as it was a measure of my culinary skill. Had I inherited the muscle memory yet? Would the dish taste the same prepared by unpracticed hands? Gently, patiently, humorously, my mother talked me through her lasagna’s preparation. Dice. Sauté. Brown. Mix. Season. Taste. Repeat. Pausing to account for my endless inquiries on matters she seemed to understand instinctively, she repeatedly cautioned that I not add too much cheese.

But here I diverged from her path: Telltale lactose intolerance and all, I’m still a child of diaspora, I reasoned. Just as my mother’s tastes have shifted subtly in the time since she first learned to make the dish with fellow Ethiopian friends learning to cook in their strange new home, surely my palate has also adapted to the country of my birth even if it’s not the land to which I am loyal. Equal parts stubborn and nostalgic, I compensated for my extra cheese with a generous dose of berbere.

Still, when I pulled the lasagna out of the oven—once, twice, three times until it looked just as golden as the ones I’d seen radiating from her table—I smiled to myself. Biting into it minutes (okay, fine, seconds) later, I marveled at the alchemy I’d managed to channel: It wasn’t my mother’s exact recipe, but it still transported me back to her kitchen. Perhaps that was the only thing that mattered.

Lasagna, as prepared by aunts, mothers, and grandmothers all throughout the Ethiopian and Eritrean diaspora, is the perfect addition to any traditional dinner spread. Serve as a side along with the countries’ national dish, injera served with different kinds of wot or tsebhi, or with just a simple salad. Like most dishes borne of some mercurial mix of need, colonial history, and immigrant ingenuity, Ethiopian/Eritrean lasagna differs in preparation depending on who you ask. This specific recipe combines the signature methods of Sheba’s Ethiopian Kitchen chef and co-owner Kibrework Gebre with the ones I learned from my own mother.

Hannah Giorgis is a staff writer at The Atlantic, and her work has appeared in the New York Times Magazine, the New Yorker, BuzzFeed, The Ringer, The Guardian, Jezebel, Pitchfork, and The FADER, among others. She can be found musing about on food—and how much she misses Addis Ababa—on Twitter at @ethiopienne.