Get a free recipe
Subscribe
England’s Rich and Golden History of Dripping
By: Shane Mitchell 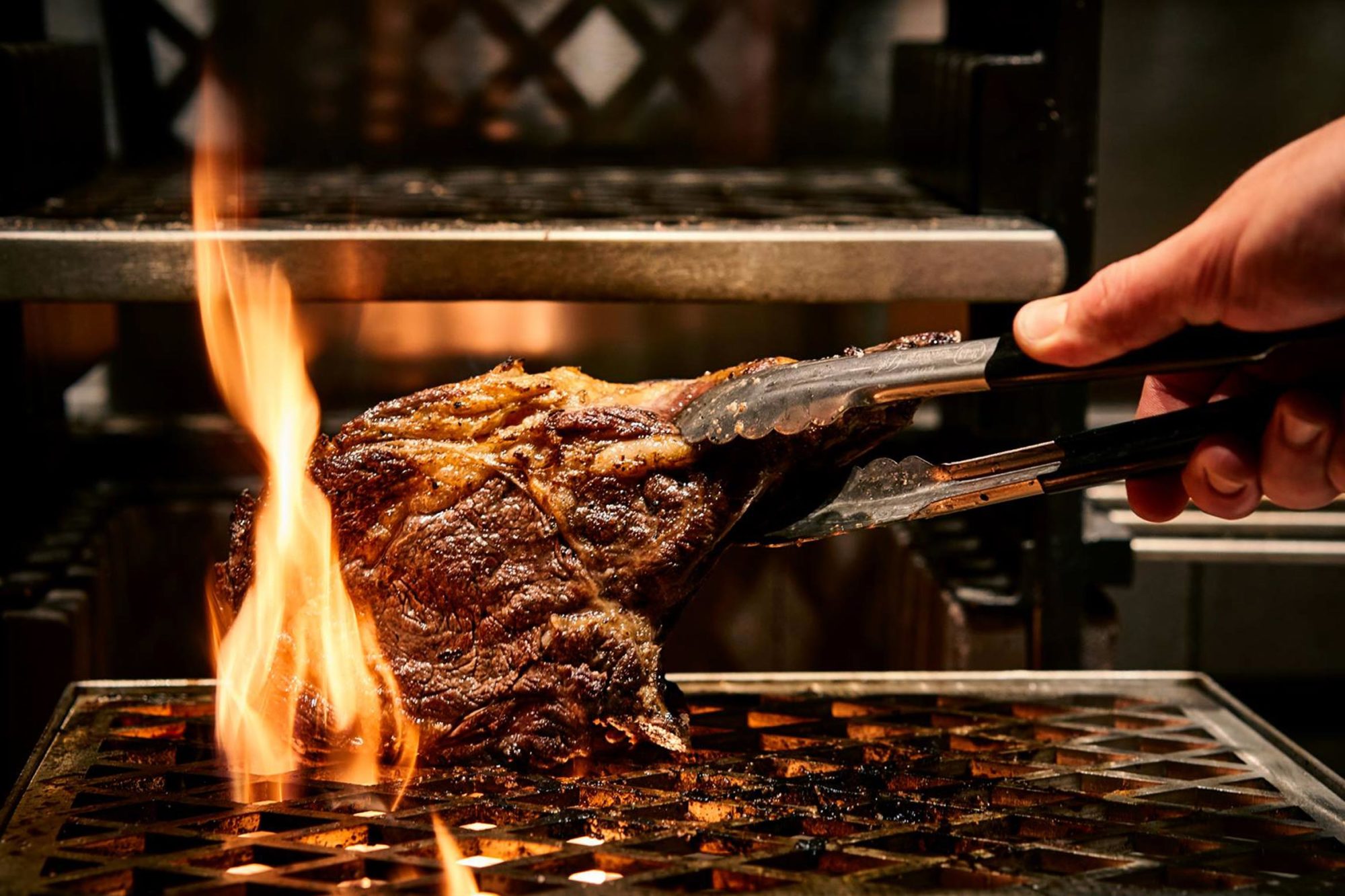 The Anglo-Saxon answer to schmaltz. Rhapsodized about by Dickens, Orwell, and Swift. It’s maybe even England’s national dish.

This modest meal was the subsistence diet of Eric Arthur Blair—better known by his pen name, George Orwell—who lived among tramps in “spikes,” the squalid temporary lodgings of Britain’s poorest class, before his seminal Down and Out in Paris and London was published in 1933. His dual account of toiling as a lowly plongeur in the bowels of a ritzy Parisian hotel restaurant, then hitting the London streets like so many other “forgotten men” down on their luck during the Great Depression, was the Kitchen Confidential of its day. For a few pennies, tepid mugs of tea were sold alongside the coarsest brown bread smeared with dripping, coagulated fat collected from cheap cuts. Orwell wrote:

“At six supper arrived, and turned out to be quite uneatable; the bread, tough enough in the morning (it had been cut into slices on Saturday night), was now as hard as ship’s biscuit. Luckily it was spread with dripping, and we scraped the dripping off and ate that alone, which was better than nothing.”

Comfort when there is none.

“So plebeian,” says Annie Gray, a British food historian and the author of A Greedy Queen, a study of royal eating habits. “The least aspirational food you can imagine.”

Dripping, never drippings. The Anglo-Saxon answer to schmaltz and lard, more gutsy than olive oil or butter, rendered from meats turning on spits in front of roaring hearths that fed lords and their legions long before William the Conqueror won the Battle of Hastings. Even among the ferocious scenes embroidered on the Bayeaux Tapestry, which recounts the historical events leading up to the 11th-century Norman invasion, one panel shows cooks roasting large joints of beef and game birds during a banquet celebrating his English Channel crossing. The first mention of a dripping pan appears in an Act of Parliament in 1463 during the reign of Edward IV. At the time, dogs and geese, and even children, were employed as “turnbroaches” to keep iron spit-jacks rotating in castle and manor kitchens. It was fiercely sweaty work next to blistering flames. In cages positioned above the fireplace, the animals were forced to run on wooden wheels that were attached by a chain system to the spit. (Mechanized, weight-driven “gravity jack” wheels eventually ended this inhumane practice.)

“As long as we’ve been roasting meat, we’ve been eating the fats coming off it,” Gray says. “And in the early 19th century, dripping was a great house cook’s perk, built into their wages, one of the things that could be sold at the back door, along with used tea leaves, rabbit fur, and feathers from game birds.”

…Gently stir and blow the fire,
Lay the mutton down to roast,
Dress it quickly I desire,
In the dripping put a toast…

William Kitchiner’s Apicius Redivivus or The Cook’s Oracle, Containing Receipts for Plain Cookery (1817) included a recipe for dripping soup, boiled with barley, celery, onions, and a binding roux of oats and fat. Henry Fielding wrote appreciatively of a “mysterious condiment” known as dripping cake in Tom Brown’s Schooldays (1857): “The cake was newly baked, and all rich and flaky; Tom had found it reposing in the cook’s private cupboard, awaiting her return; and as a warning to her…finished it to the last crumb.”

Charles Dickens professed his preference for a London steak—versus fussier Parisian filet de boeuf—in “A Slice off the Joint,” an essay in his weekly journal All the Year Round (1868): “It requires no effort of digestion, it melts in the mouth like a peach, passes at once into the blood, and goes straight to recruit the heart.” Dickens asserted that to broil a rump steak properly required a cook of great expertise, and one who knew to rub the bars of a gridiron with dripping so as not to imprint the meat.

Dripping, never drippings. The Anglo-Saxon answer to schmaltz and lard, more gutsy than olive oil or butter, rendered from meats turning on spits in front of roaring hearths

As cooking methods evolved from open hearth to closed oven, recipes also changed, and fats that were once prestige became associated with a poorer diet. By the time Orwell slummed in London near the beginning of World War II, dripping was equally reduced in circumstances, a mere bit of protein smeared on stale bread, as he noted in Down and Out: “Knots of men stood at all the corners, slightly underfed, but kept going by the tea-and-two-slices which the Londoner swallows every two hours.”

Throughout the postwar ration era, before vegetable oils were promoted as a healthier alternative, dripping was favored for frying fish and chips in workingman’s cafes.

And then came mad cow disease.

On a recent Saturday, in the basement prep kitchen at Gridiron, a darkly handsome live-fire grill attached to another ritzy hotel facing Hyde Park, where almost 1 million Brexit protesters have gathered to march, Colin McSherry roots around in the refrigerated walk-in for tubs of dripping for me to inspect. A bearded Irishman with a fondness for lamb fat, his résumé includes the Fat Duck, the Ledbury, and Noma. This far below street level, the sound of drums and loudspeakers muted, the two of us admire a by-product of beef supplied to him by Lake District Farmers, a livestock cooperative and bespoke butchery that specializes in grass-fed, native-breed Herefords.

“Fat is flavor,” he says, cracking open the tubs and dumping solidified dripping in a saucepan to render with garlic and thyme. “It blows my mind that people don’t eat fat these days—it’s such an important part of the animal.”

He saves dripping from the grill to enhance sauces—bone marrow, porcini bread, brown butter and anchovy—for pairing with a Barnsley hogget chop or saddle of venison.

“And I use it to wipe finished meat after slicing, to add a bit more flavor.”

A Highland filet seared over beech, oak, and birch charcoal is reason enough to stick around for dinner, but the real prize is a flaky potato galette shaped like gold bullion. McSherry mandolines thin-skinned yellow spuds, adds copious beef dripping enhanced with duck fat before layering and compressing with a pair of scavenged 55-pound elevator weights, followed by a steam roast in a Rational combi oven, and a final plunge in a deep fryer with more fat until crisp on the outside and fondant creamy in the middle.

Across London in Clerkenwell—once a Dickensian industrial district of stables, taverns, and tea gardens—the Quality Chop House is a converted tradesmen’s eating house, built in 1869, where laborers grabbed quick meals while perched on narrow benches in wooden booths. (They’re still in place, along with the tiled floors and tin ceilings.) It’s near Smithfield Market, the oldest livestock market in Europe, dating to the 12th century. Some of the pubs Orwell frequented while working for the BBC are also close by. A steadier salary afforded him more substantial dinners, although he never shed a craving for stodge like suet pudding and kippers, and even waxed nostalgic about the British penchant for “a slightly barbarous diet.”

The chophouse’s original glazed windows advertise “London’s Noted Cups of Tea” and “Progressive Working Class Caterer.” Next door, the butcher shop supplies the kitchen with massive cuts that would be familiar to a great house cook—on Sundays, it’s a roast dinner of Highland beef rump and brisket with Yorkshire pudding. But the best meal is midweek lunch, when Shaun Searley sends out Belted Galloway mince on dripping toast.

According to him, the quality and richness of renderings varies not by breed but rather with age and occupation. “We work with a lot of OTM animals. That stands for Over Thirty Months,” he says. “It goes back to mad cow, so the spinal column has to be examined, but we had one cow, about six or seven years old, whose only job was to mow the lawn, and in an animal like that, the actual flavor of the dripping was going to be really rich.”

He disappears into the kitchen and moments later returns to the table. “Our national dish,” he says, presenting a bowl of golden liquefied fat with caramelized crackling sediment next to two slices of dense brown bread. “Growing up, this is the combination you’d want to dip your bread in, that salty, roast-beef-y marmite.”

Plebeian, possibly. But I’m far richer for eating it.