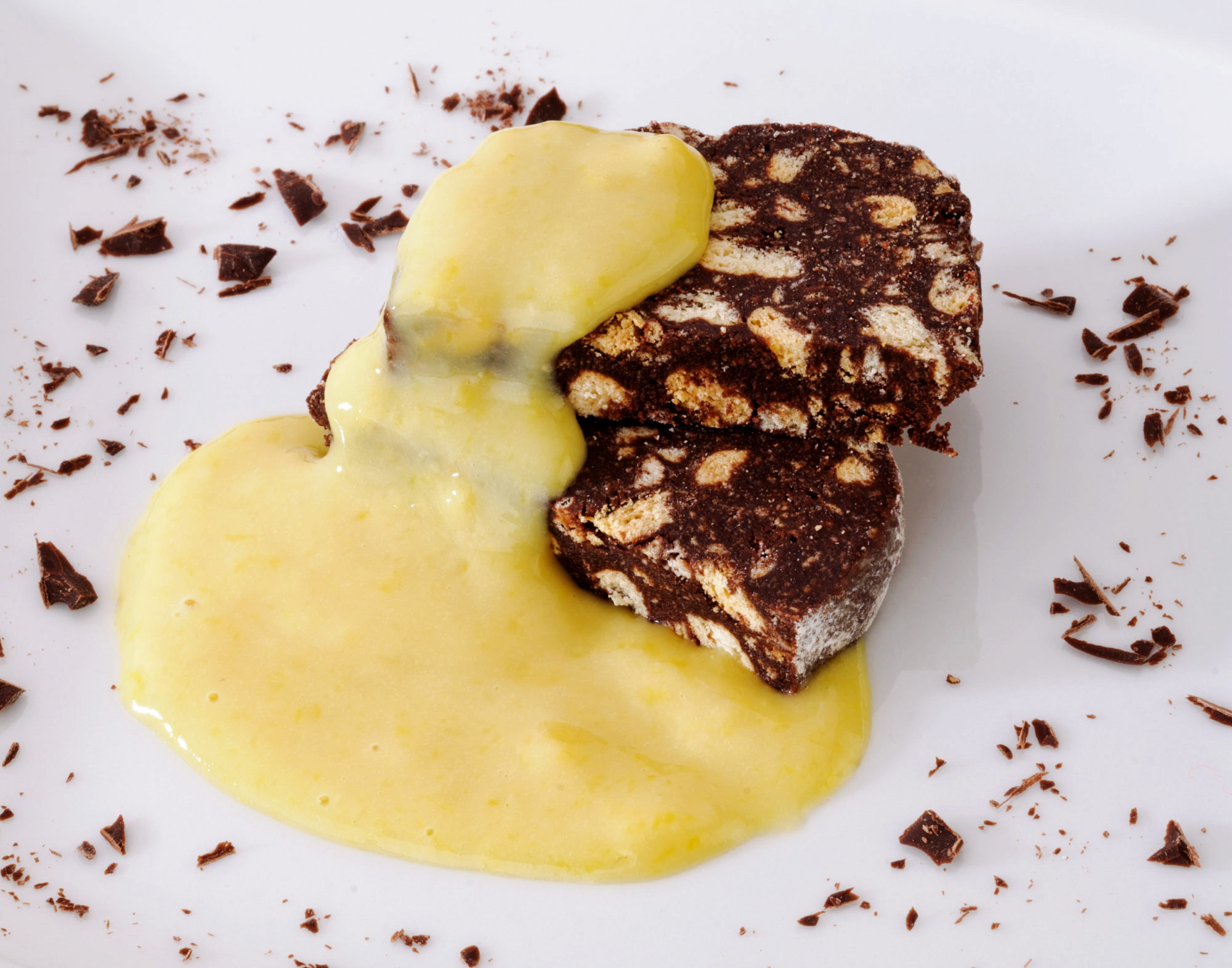 Like many Bolognese classics, the foamy dessert is an appreciation of richness and simplicity.

On my last morning in Bologna earlier this year, I dodged the cold rain—taking shelter under the city’s many porticos—in a last-ditch mission to make it to one of the most highly regarded pastry shops in town: Pasticceria Regina di Quadri. I had my eye on several pastries and sweet breads, but first:

That’s when I noticed it: Sitting next to a bowl of sugar cubes, a carafe of milk, and a cup of coffee stirrers was a tall, lidded glass jar full of an orange-yellow cream. It looked a lot like lemon curd. As I waited for my order, a customer ahead of me spooned some of it into their espresso, stirred, and slurped it up in two gulps. I gingerly put some on the end of a coffee stirrer and licked it clean. It was not lemon-flavored, but sweet and rich, with a density that made it float like a cloud atop hot coffee. “Zabaione,” the barista said, noting my surprise as she passed me my coffee. “It’s good for you.”

Classically made from just eggs, sugar, and wine—any kind of wine, or really almost any liquid, including liquor, tea, or coffee—beaten over a hot water bath, zabaione is a mousse-like custard traditionally served on its own, in a glass, or over fruit as a dessert in a bowl. Though it has fallen in popularity in most cities, it runs through Emilia-Romagna like a yellow brick road. “I used to help my uncle make it when I was seven or eight years old,” says Francesco Presenza, a resident of Milan who travels through Bologna for work each week. “I still remember how tiring and boring it was to mix the ingredients with a wooden spoon—though I did like licking the spoon afterwards. It was popular as something you made at home, kind of like Jell-O? But I hardly see it except for in Bologna now.” From Naples to Venice, zabaione is mostly served to tourists, but in Bologna it’s a facet of daily life. It’s found baked into cakes, croissants, and sweet breads; drizzled over or churned right into gelato; served alongside fruit or cookies; spooned atop ravioli (this can be sweet or more savory, and it’s better than you’d think!); and even stirred into hot and cold drinks.

Neither historians nor Italians can agree on an origin story. Mariangela Montanari, co-owner of balsamic vinegar house La Cà dal Nôn, insists that three main fables dominate the narrative. “There’s one related to a Spanish saint in Piedmont who used it to soothe people,” Montanari says. “A particularly silly version says a French captain, Giovanni da Buglione—some sources say his name was Zabaione—created it out of nutritional necessity to feed his troops during the grim French occupation of Italy. And the last says it came from across the Adriatic Sea, that it was imported by Venetian merchants.” Montanari subscribes to the notion that it doesn’t matter where it came from, just that it’s made properly. “You have to whip the eggs very fast, and you have to use good eggs,” she says. She likes to make hers with balsamic vinegar, or saba, instead of wine; the variations are endless.

The first known written recipe for a savory version of the dish can be found in Bartolomeo Scappi’s Opera, from 1570, where “zambaglione” is described as a combination of beaten eggs, Malvasia wine (a Greek grape), and chicken broth. In Lo scalco alla moderna (1694), author Antonio Latini includes a recipe for “zambaglione” spiced with cinnamon and garnished with pistachios. Recipes abound in Emilian cookbooks, with many calling for the sweet sauce, made with either honey or sugar, to be served alongside something savory, such as cotechino, a large pork sausage. In the Art of Eating Well, Pellegrino Artusi’s 1981 magnum opus, he includes a few simple recipes for zabaione, including one in which the foam is poured into the center of a custard flavored with raisins. Meringue made with zabaione

Residents of Naples claims to have some involvement in the dish, and the version found in the southern city—one made with Marsala—is the most commonly reprinted in American cookbooks. At tourist traps throughout Italy, it’s often made tableside by a waiter with a round-bottomed copper pot and bunsen burner. The theatrics are most of the fun: After the egg yolks are dropped into the pot, the empty shells are used to scoop up a bit of sugar and measure out the wine, rum, or liqueur. In Bologna and nearby towns like Modena, Mirandola, and Parma, zabaione is on par with other, more famous ingredients, like balsamic, fresh pasta, and Parmesan.

The pastry cases of Pasticceria Regina di Quadri are filled with zabaione. The cream I had dumped in my coffee, so thick with egg yolks that it can be piped, also flavors truffles, cream puffs, croissants, layer cakes, danishes, molded chocolates, trifles, and sweet buns. Spooned into pastries before they’re baked, it erupts into golden rivers in the oven, stains vanilla custards golden, and adds heft to coffee drinks and cocktails. “We always make our own with fresh eggs,” Francesco Elmi, the head pastry chef at Regina di Quadri, says of his zabaione. “We use eggs from chickens that ate a lot of grass and green, so the center, it is really red,” he says.

The part of the egg Americans call the “yellow,” Italians often call the “red” because it denotes quality (“l’uovo rosso”). Crack an egg open in Italy and there’s a good chance the yolk will be saffron orange, a color closer to crimson than gold. It’s this saturation that gives zabaione its characteristic lemon-yellow hue. “The chicken breed has something to do with it,” Montanari says of the red yolks, also noting that historically chickens roamed the Po Valley and around Bologna and ate a lot of green grass, insects, and seeds, “and this gives their yolks a lot of nutrition and the color we like.” At Osteria Francescana, Massimo Bottura and Lara Gilmore’s artistic ode to the classical foods of Emilia-Romagna, zabaione is no longer on the menu—at least not in an obvious way. It used to be served alongside Bottura’s rendition of cotechino; today he’s serving it in his famous Oops, I Dropped the Lemon Tart, a composed plate that uses lemon zabaione in place of curd, adding a frothy, ethereal element to an otherwise dense dessert. “It’s yellow because of the eggs,” Bottura tells diners, “not the lemons, which is part of the fun.”

Locals chatter about how some eggs in markets are laid on farms where the chicken feed is enhanced with marigold leaves or annatto seeds in order to yield yolks that are deep orange in color. Others say they might be artificially dyed. “You have to know the farmer,” Elmi advises.

To get zabaione that golden, you have to start with a lot of egg yolks, at a ratio far higher than what’s usually found in cookbooks. “Even Artusi calls for only three yolks to four tablespoons of sugar,” Montanari says, and the Silver Spoon Cookbook, first printed in English by Phaidon in 2005, specifies 1 yolk per tablespoon of sugar.

When I first made it, following a recipe from the Silver Palate cookbook that calls for 8 yolks and ¾ cup of sugar, the resulting mixture was dense but still far closer to beige than golden yellow. It tasted fine, though I preferred the scent of Vin Santo over Marsala. And what I wanted more than anything was a flavor that would go well with strong coffee.

After talking with a few farmers at the market, I found eggs that sported very orange yolks. I started with 8 of those yolks, plus ¾ cup of sugar, a splash of rum, a shot of Galliano, that golden vanilla liqueur, and some Vin Santo. It was sweet but boozy. I tried it with a crisp white wine I had, too, plus a rosé for good measure. They all tasted nice. I’m sure Marsala or a Moscato d’Asti would be good, too. Poured into hot coffee, it takes me back to that rainy day in Bologna where I discovered the careful magic of real, golden yellow zabaione.

The key to a zabaione that’s sun-yellow like the ones in Bologna is finding really, really fresh eggs with orange-yellow yolks. Speak with the farmers at your local farmers’ market to see what they’re feeding their chickens. A diet high in greens, bugs, alfalfa sprouts, and sometimes corn will yield healthy hens and especially orange yolks. But even if your zabaione looks more like vanilla cream than lemon curd, the texture—a dense but meltingly light foam—is cause for celebration.