Get a free recipe
Subscribe
The Emerald Green Drink of 1970s Japan
By: Krista Garcia 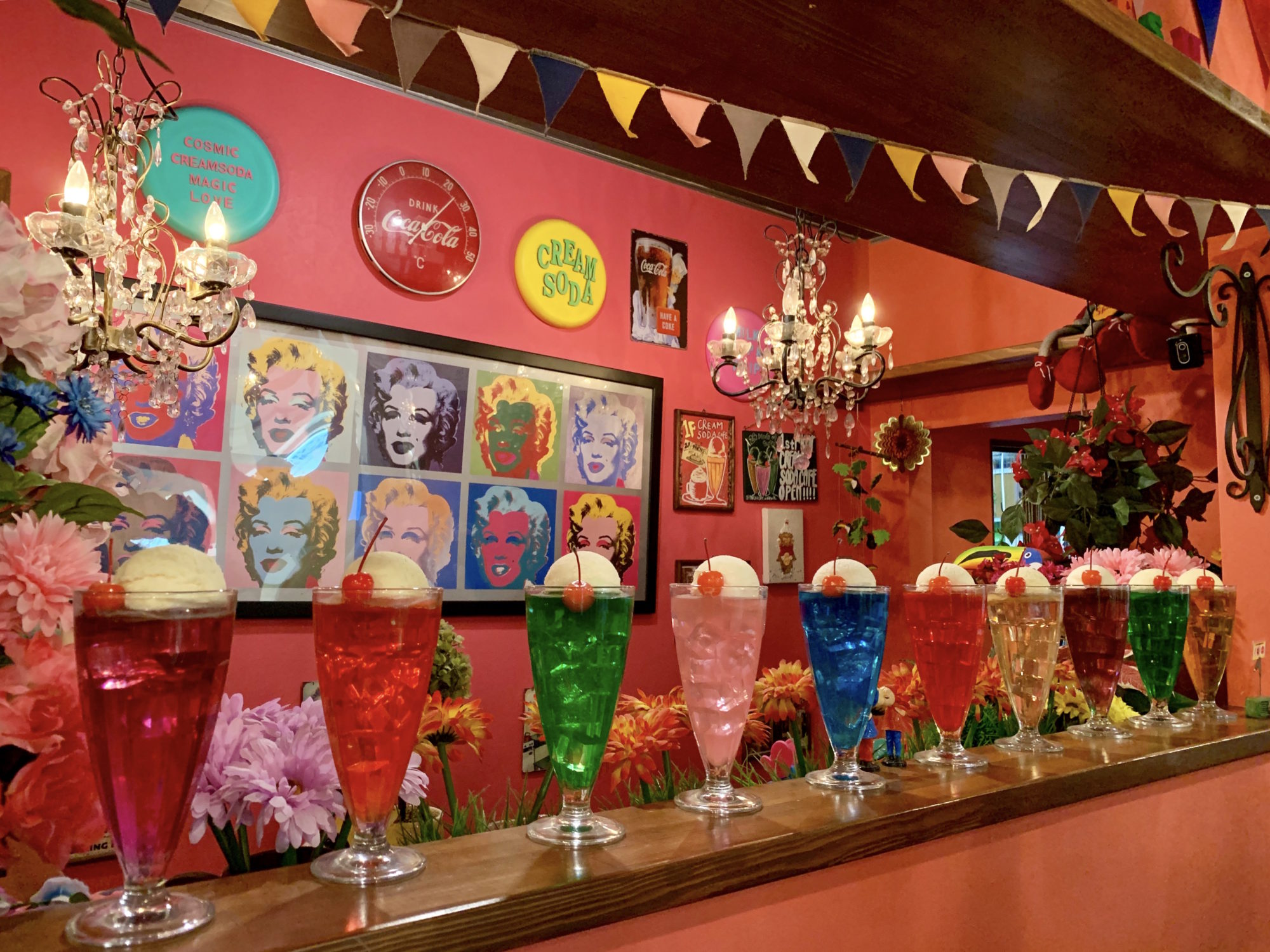 Finding a cream soda is not hard in Tokyo. Finding a cigarette and spaghetti-filled kissaten to drink it in is another thing.

I’ve been drawn to cream soda ever since I bought a set of miniatures depicting a kissaten at a Japanese bookstore about three years ago. The set included all of the makings of a classic Japanese cafe: a tiny plate of spaghetti, an old-timey phonograph, a pack of cigarettes with a matchbook and ashtray, and a green soda. Despite being rendered in plastic and only half an inch high, I recognized the green drink from photos I had seen on Instagram.

This beverage that originated in 1970s Japan is called cream soda—a misleading name for what could be more accurately described as a melon soda ice cream float. These beauties are almost always served in a tall clear glass, crowned with a partially submerged scoop of vanilla ice cream and a neon maraschino cherry bobbing on the surface.

Captivated by this emerald-green fizz, I started looking at Instagram hashtags like #kissaten, #junkissa (another word for a Japanese cafe), and #クリームソーダ (cream soda) to get my daily fix. When I started planning a trip to Japan a few months ago, I began noticing a book in my feed with a green cream soda on the cover and English text superimposed that read “Cream Soda Real Cafe Album,” which appeared to be a guide to where to find this old-fashioned favorite around Japan. Even though I couldn’t read a single word (and even though I admittedly hate melon), I tracked the book down within 24 hours of setting foot in Tokyo. Through snippets pieced together using Google Translate and the help of bilingual friends, I was able to figure out names and addresses of many of the 38 cream-soda-serving kissatens included in the book. I quickly learned that it’s not hard to find this colorful treat in Japan. Green cream sodas are commonly displayed amongst the plastic food models next to stacked pancakes and rice-filled omelets in glass cases outside of restaurants. McDonald’s in Japan even sold them last summer. Even I, as a foreigner, could grasp that cream soda’s modern appeal was more about finding it in its natural habitat—cafés unchanged by time—than the drink itself. Wouldn’t you prefer drinking a cream soda in a straight-up ’70s green-and-orange naugahyde booth or beneath an elaborate chandelier where you can use a coaster emblazoned with a line drawing of a woman dolled up like a French ye-ye singer?

My first experience at Tokyo’s Kamiya Bar included the kissaten trifecta of my dreams: cream soda, spaghetti Napolitan made with ketchup and served with a bottle of Tabasco and a shaker of Kraft parmesan cheese, plus an ashtray on the table. I braced myself for the first sip of musty melon. I didn’t use the long teaspoon to stir in the softening ice cream first. Instead, I went for the straw to get a pure blast of that green liquid, and…it didn’t taste like melon at all. The flavor was generically sweet. Really sweet. I tried running down a mental list of fruit the soda evoked, and none came even close. If I was pressed in a blind taste test, I might guess pineapple.

Fanta and Suntory both make a fluorescent green melon soda in Japan, but at kissatens, cream soda is usually made from a blend of club soda and melon syrup, often a brand called Captain, poured from a carton. Green is by far the most popular color for these floats, but blue (“blue Hawaii,” i.e. tropical) and red (strawberry) also make appearances, while purple is one of the most elusive tones. One café in Fujisawa is famous among the cream soda crowd for using a split glass and serving green and red sodas side by side. Shin-Setsu, a kitschy new-school cream soda specialist I visited in Kyoto, is the only place where you can sample the full rainbow while listening to Wanda Jackson on vinyl. This two-story shop with hot pink walls offers 24 different flavors, from hibiscus to banana, in corresponding shades. Oddly, the green apple is turquoise, but at least it actually tastes like green apple.

Shin-Setsu’s clientele seemed to consist predominantly of young women trying to get the perfect shots of their drinks and surroundings. The Instagrammers I corresponded with all mentioned the aesthetics of the drink, specifically the fun of seeing the differences in the drink’s presentation from café to café. Some cafés garnish theirs with wedges of honeydew, chunks of frozen melon, or swirls of soft-serve instead of the traditional ice cream scoop. Taste wasn’t a nonfactor, although I felt vindicated when one said that melon soda is simply very sweet and doesn’t taste like the fruit at all.

Mr. Yamamoto, the owner of Doremi, a café established in Osaka in 1967, told me it was mostly little kids and older people who order cream sodas. The beverage appears to have come onto the scene in the 1970s, making the original audience the parents of the current crop of Instagrammers.

“For the younger generation, it’s a part of Japanese culture,” an Instagrammer who goes by retrotabitokyo told me. dmmsmlv went a step further. “In the days when our father and mother were children, cream soda was popular as a luxurious drink, so in modern times it’s recognized as nostalgic,” he wrote in a message.

Neither I nor these younger Japanese enthusiasts were drinking cream sodas 40 years ago, but as long as there are smoke-filled kissatens with their iconic soda shop glasses, crustless egg salad sandwiches, and records played from start to finish, we can all be transported, at least for a moment, to the past.

Krista Garcia is a Portland-based writer whose work has appeared in Eater, Fodors, NYmag.com, Serious Eats, and the blog she published for nearly two decades, Goodies First. She loves unnaturally colored food and hates melon (yes, even watermelon).