Get a free recipe
Subscribe
Eating Alone in Public Is Good
By: Liza Corsillo 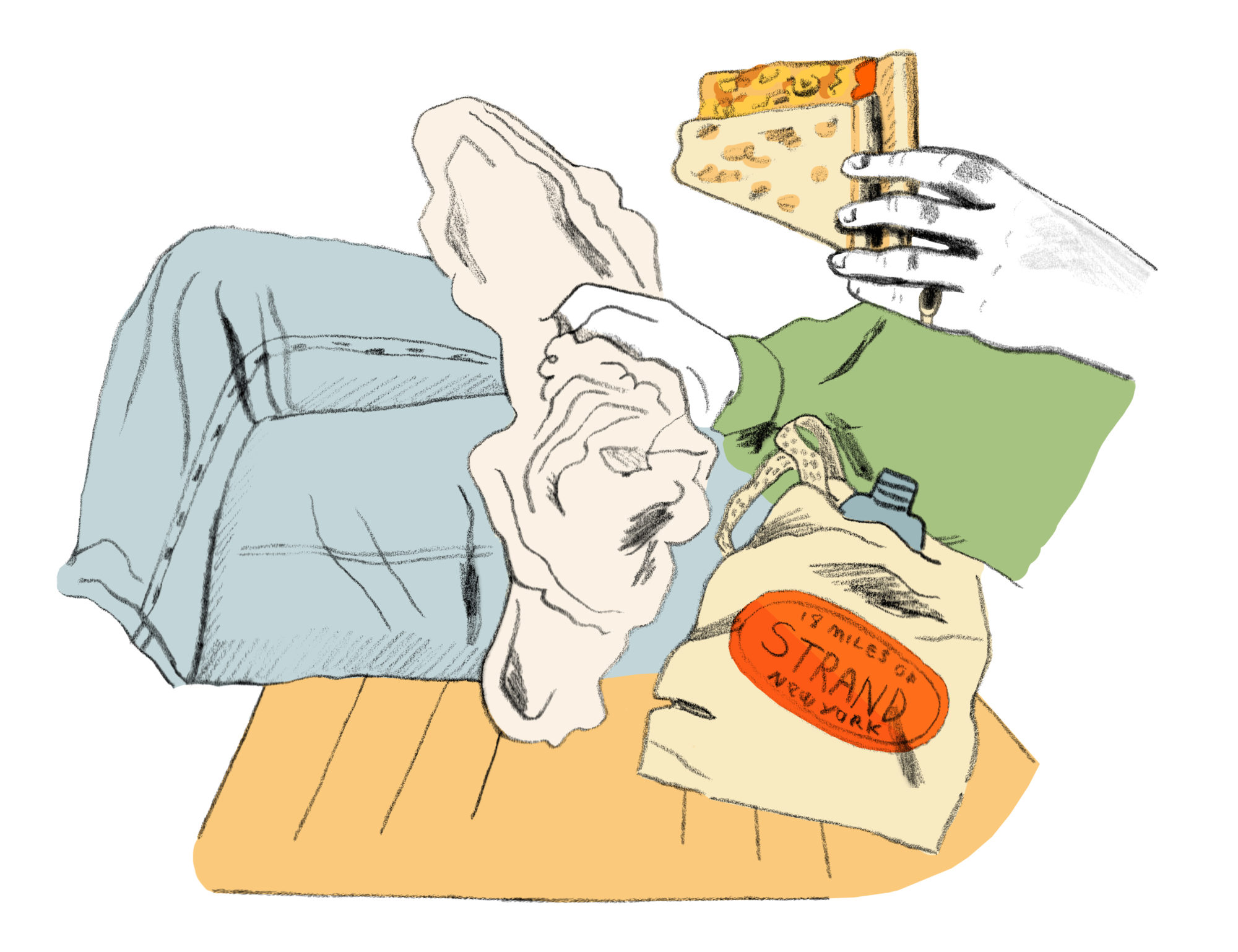 It’s time to stop shaming people for getting a snack in where they can.

I still remember the first day I was allowed to ride my bike to a local pizza place and order a slice and a Coke on my own. I must have been 12 or 13, but I felt 25 and fully in control of my life. I ate that perfect slice by myself, seated on the curb in a parking lot in suburban Connecticut. Now, thousands of slices later and on much more densely populated curbs, I never worry about the strangers who bear witness to me licking pizza grease or Cheeto dust off my fingers. Let them see, in silent accord with everyone else on the street. In my public bubble, I am somehow at my most private. This is an ode to all of us who eat alone in public and especially to those who do it with an elevated level of abandon. Where we eat has moved from the comfort of home to the forced fellowship of a train platform or a crowded city park at lunchtime. In these packed situations, we have no choice but to create a sort of internal privacy by shutting off inhibitions and entering a trancelike state, a zone where applying makeup or eating a tray of sushi amidst a mob of other commuters is commonplace.

For those of us who live in New York, the constraints of the city—long working hours, lengthy and crowded commutes, and tight living quarters—limit our free time and our personal space. All of life’s activities, both banal and intimate, like eating, grooming, and even crying, play out in parks, on public transportation, and while navigating busy sidewalks. Who among us has the luxury of leaving work in time to prep, cook, and sit down to dinner at a reasonable hour? That kind of wholesome lifestyle must be bought and skillfully organized, a privilege we don’t all have.

I have had friends who disapprove of eating on the subway. I’ve even participated in attempts to parse out which foods are OK to eat on the train and which aren’t—most of us have a horror story about sitting next to a particularly stinky styrofoam takeout container, the guy who peeled an entire banana and then held it naked before taking his first bite, or projectile Go-gurt ruining an interview outfit. But who are we to police others’ public eating? In fact, eating, and watching other people eat, on the subway or on the sidewalk is one of my favorite New York pastimes.

Emboldened by anonymity, and aware that tonight we may only have time to eat a snack on the subway for dinner, why shouldn’t we indulge in our most impractical and unphotogenic food desires? A pretzel-wrapped hot dog eaten one-handed while grabbing a Citibike? Count me in. A whole avocado eaten in bites like an apple? I’m willing to try. Better yet, handfuls of greens from a bag of prewashed salad. It’s healthy! People’s eating on the subway is often unrefined, sometimes a little gross, and not always shrewd in the minds of onlookers, but I prefer watching them eat to watching them stare at a phone. Public displays of private behavior remind me that despite our robotic existence, we are human and fallible—especially when coffee gets spilled or the train jolts and a tamale goes flying. I have only one rule: Try not to spill your food on your neighbor.

Liza Corsillo is a writer and illustrator living in Brooklyn, NY. She was previously a staff writer at GQ and has contributed to GQStyle, Men's Journal, Men’s Fitness, New York Magazine, and The Strategist.