Get a free recipe
Subscribe
Durian Deserves Our Love
By: Yi Jun Loh 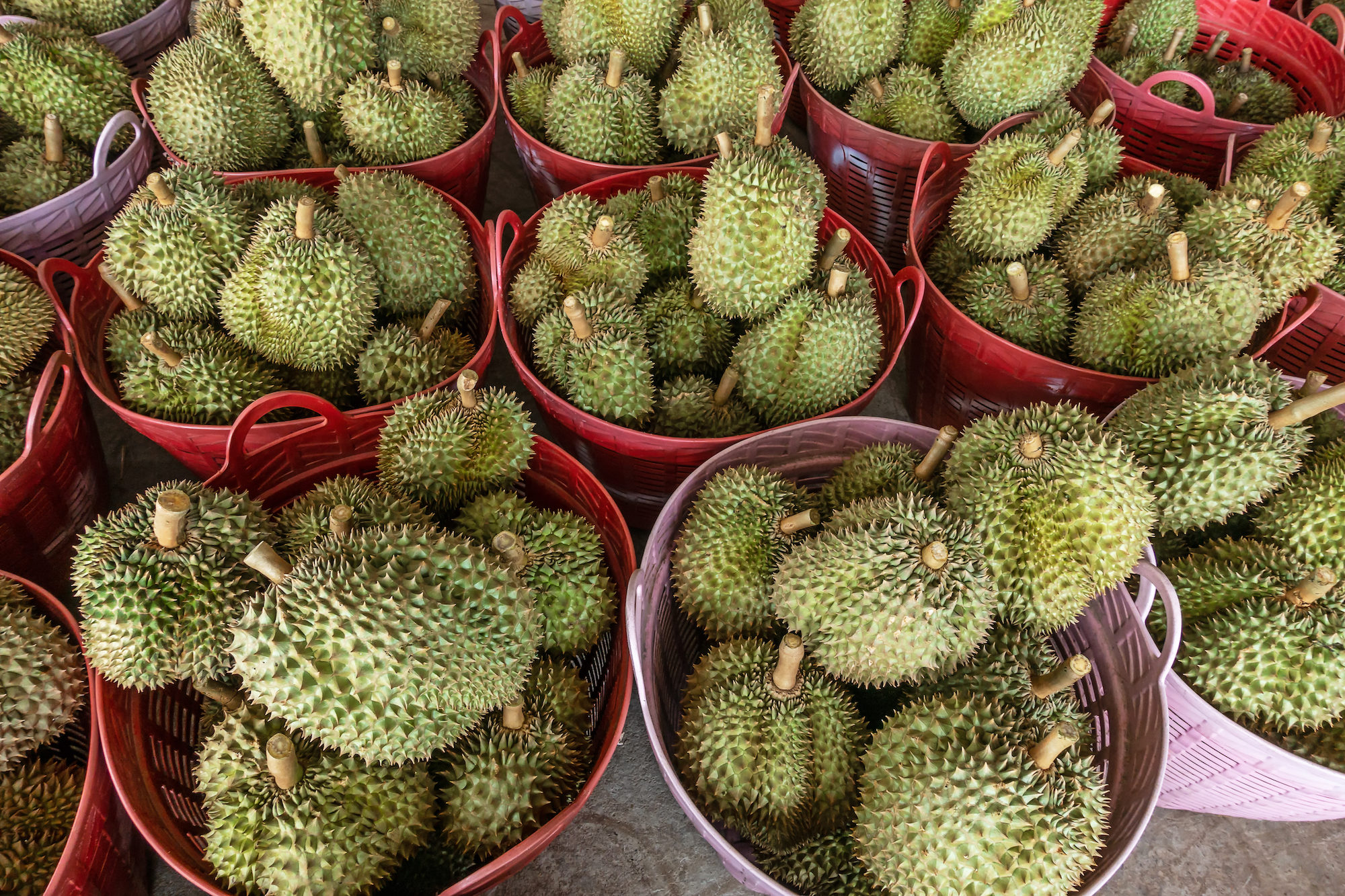 Durians are often portrayed as yet another strange, fantastical delicacy of Asia. But in Malaysia, Thailand, and Indonesia, they’re prized as the fruit equivalent of foie gras.

Durian is a fruit we love to hate. In much of the Western world, durians have long been depicted as a disgusting delicacy from Southeast Asia. Like balut (duck eggs with semi-formed embryos) and civet coffee (coffee beans digested and defecated by civets), the spiky fruit is often presented on food and travel shows purely for its shock value and the ripples of schadenfreude felt from watching unwitting hosts navigate its notorious stench.

It has been likened to “pig shit, turpentine, and onions garnished with a dirty gym sock” by travel writer Richard Sterling in the book The Travelling Curmedgeon and described as akin to “completely rotten, mushy onions” by Bizarre Foods host Andrew Zimmern—right after he gagged and spat out a mouthful in front of his Malaysian guide. But as a Southeast Asian, I say to hell with all this bad press. Don’t for a second believe the clickbait-y, sensationalist Western narrative that surrounds durian. There’s a reason it’s regarded as “the king of fruits,” and it sure isn’t that it stinks like medieval monarchy.

Yes, durians might have a pungent, unfamiliar odor. But once you get past that, like all Malaysian children were cajoled into doing, you’ll be greeted by a taste so sultry it might just kick-start your journey to becoming a durian convert. With an avocado-like richness and a pleasantly bittersweet, almost alcoholic flavor, there’s nothing quite like it in the fruit universe. For this reason alone, in Malaysia, where I live, the durian isn’t just considered a native fruit; it is a fruit that has spawned a whole culture and lifestyle, a fact that is so often missed in the Western narrative. With each durian season in Malaysia—running typically from June to September—peddlers fill the streets and public spaces transform into venues for buffets honoring this singular fruit, all while the air fills with its sweet stench. Like foie gras is to France and otoro is to Japan, durian has long been considered the rich, aphrodisiacal ambrosia of Malaysia. But unlike those lavish, haute cuisine luxuries, with prices as low as 20 ringgits ($5) per three-pound fruit, durians are made to be savored by all.

Their ubiquity in Malaysia is so great that despite their potent ability to light up a room in a matter of seconds, durians are a regular feature in many Malaysian pastry shops, restaurants, and back-alley bakeries. By virtue of its fruit flavor, durian feels right at home in cakes, candies, and kuihs (sweet Malaysian snacks), where its stink gives way to a buttery sweetness. It might be tough to imagine the strong taste of durian jiving well with any other flavor, but the number of durian varieties out there means there’s a durian for every occasion. Sweeter, fresher durians are a perfect accompaniment to tropical fruit flavors like mango and coconut; on the bitter end of the spectrum, durians with coffee-like notes work impressively well with classic dessert flavors like chocolate and caramel.

Its milky, custardy texture also makes for a delightfully silky ice cream, as its high fat content brings about a rich creaminess that is unparalleled in any other fruit-based ice creams. (Think dulce de leche gelato but three times as rich.) And in recent years, dessert vendors in hawker centers have been adding durian in local shaved-ice desserts, like ice kacang and cendol, with the creamy durian flesh adding another layer of textural contrast to the crunch and bite of the shaved ice and jelly toppings. But the usage of durian doesn’t end at desserts; it’s used in savory dishes, too, melting into a buttery consistency when cooked. There’s gulai, or curry stews fortified with durian flesh; tempoyak, a sambal-like condiment of fermented durian that’s often served as a sauce to elevate humble dishes like steamed fish and plain rice; and the deep-fried durian fritters we call cekodok. In the street markets of Thailand and Indonesia, you’ll even find chicken soup spiked with durians, seeds and all, giving the soup a whole other dimension of fruity fat and funk.

Go one level deeper, and you’ll find that not all durians are created equal. Just like how there are different varieties of apples—Granny Smith, Golden Delicious, Fuji—there exist hundreds of durian varieties (over 500 in Southeast Asia), with dozens more being developed each year. Each variety of durian is suited to different seasons and taste preferences.

In Malaysia, the Sultan variety is often touted as a good entry-level durian, with a subtle (if a bit weak) taste perfect for first-timers. As the novice grows more accustomed to the base funk of the king of fruits, they would naturally move on to more nuanced varieties. Famous durian varieties include Red Prawn, a durian with a firmer flesh and a scampi-pink hue; XO, prized for its bitter, cognac-like aftertaste; and Musang King, a durian growing in popularity due to its quite pungent flavor and consistently creamy texture. Further north in Thailand, there are Chanees and Monthongs, which have profiterole-like parcels of flesh—crisp on the outside but creamy and soft on the inside. They’re also plucked when they’re underripe, mellowing out the usual acrid aroma. Moving south, Indonesia has its own set of local varieties, too, like Petruk and Matahari, which are known for their softer, yogurt-like texture and funkier flavor. And in remote areas like the island of Borneo, you can find wild jungle varieties, like a species called durio graveolens, which has firm red flesh that purportedly tastes like cheddar and peanut butter.

Far from being a singular, gag-inducing entity, durians, like cheese and wine, have great nuances and flavor variations. Look past the clichéd propaganda around durians, and you’ll begin to understand why they’re an unmatched culinary phenomenon in this region of the world. Just as the age-old adage says you shouldn’t judge a book by its cover, don’t judge a durian by its smell.