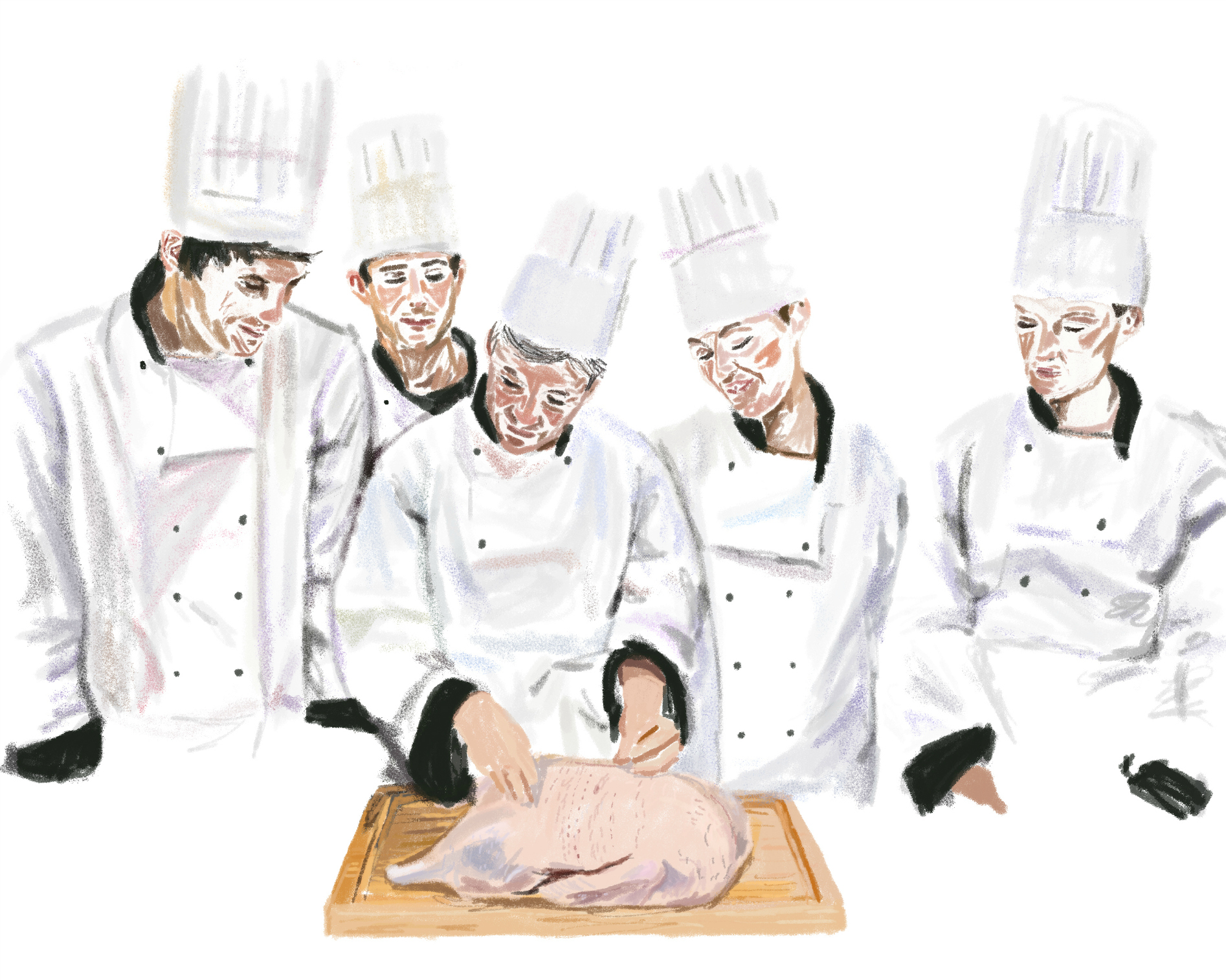 Cooking in the 1980s is a column in which journalist John Kessler recalls his time at L’Academie de Cuisine in Bethesda, Maryland, during the 1986-1987 academic year. Each daily lesson featured a three-course menu. Things got interesting.

My 14 fellow cooking-school classmates and I stood at our stations, all of us in identical chef’s whites and aprons, and waited for our lead instructor, Pascal, to arrive with some critter or part thereof. We had no printed syllabus, so each morning the daily beast was a surprise. It could be a nice one, like gorgeous New Jersey sea scallops in the shell, with their orange roe attached. Or it could be a set of veal kidneys encased in billows of white suet, a whole monkfish with its revolting monster head, or a tub filled with malodorous flaps of honeycomb tripe. (Our one attempt at tripes à la mode de Caën was worse than inedible.)

On this particular morning he came bearing a duck.

Pascal, who started as a teenage commis at the Hotel Ritz in Paris, had some thoughts about the sorry state of duck cookery in American restaurants. “Most places roast it until it is completely dried out and stringy, then they cover it with a sweet sauce,” he said, drawing out the phrase in a way that could only end with a derisory snort. It was his duty as a French culinarian to prevent us Americans from indulging our worst instincts. I guiltily considered my birthday dinner a few months before, when my girlfriend took me out for that very duck—served in a raspberry sauce as slick and glossy as the Human League.

Pascal had a workaround. We could cook the duck two ways, searing the magret (breast) to medium rare, then deboning and stuffing the legs with a sausage forcemeat. We would roast the carcasses for stock and collect the livers to freeze until the following week, when we’d make a duck liver mousse with cognac. Unbeknown to me, this preparation—eventually christened “Duck Two Ways”—was about to have its moment on American menus.

Pascal began passing out ducks. They were, he explained, the Pekin variety, weighing about 5 pounds, which at that time was the only breed commercially available in the United States. (Not to be confused with Peking duck, the classic Chinese preparation.) I slipped my boning knife around the leg; it came off easily despite a thick layer of fat.

“In France we have Barbary ducks,” Pascal said as we mangled our charges. “They have a nice magret—really thick and red,” he added, shaking his hand in the air and rolling his eyes for emphasis. “But these are pretty good.” In 1987 we didn’t yet have the larger, more muscular Barbary (also called Muscovy) ducks on the market. But we would within a few years. America was just starting to produce domestic foie gras, and the country was about to have a collective freakout over the appearance of hot, seared foie on menus. The top producers—D’Artagnan, Hudson Valley Foie Gras, and Sonoma-Artisan Foie Gras—raised both Muscovy ducks and the Muscovy/Pekin hybrid called Moulard because they produced the fattest livers. The breasts from these ducks would become a 1990s menu staple.

My classmates and I scored the blubbery skin on the breasts so they’d leach more fat and crisp in the sauté pan. Once the skin crisped, we flipped the breasts over and stuck our skillets in the oven to finish pan-roasting them. Exactly seven minutes.

We partially deboned the legs, then whacked their tips off with a cleaver so we could push the bones up and through, like lollipop sticks. Once we could cleave the bones with confidence, the rearrangement of the duck’s anatomy was easy. We were left to our own devices to devise a forcemeat (a stuffing based on ground meat rather than bread) to fill the duck legs, with most of us opting for some combination of sausage, nuts, and dried fruit. Into the oven they went. And then we turned our attention to the sauce, the famous orange sauce—the one, the true, the only orange sauce, sauce bigarade.

A note on this sauce: It’s a classic gastrique, a brown sauce that gets its intriguing thrum and lift from fruit acid and bittersweet caramel. It starts with sugar and vinegar, vigorously boiling down in a pan and sending out noxious fumes until an unholy golden goo begins spitting and sputtering. At this point, if you’re working at a quality French restaurant in the 1980s, you add—I shit you not—a can of defrosted frozen orange juice concentrate. You let this concoction reduce and caramelize again, at which point you add your brown duck stock and maybe a spoonful of veal demiglace for good measure. The sauce comes out thick enough to coat a spoon, with a shot of sweet-and-sour fruit flavor tempered by intense meatiness. While testing the recipe I learned that supermarkets still stock a few cans of orange juice concentrate (even though nobody really likes it anymore).

We assembled our plates, with the sauce coating the plate, the duck legs sticking up from the center, and the rosy breast sliced and fanned. It was about to be the best duck I had ever eaten. The breast rosy like good steak, the leg as crisp-skinned and unctuous as confit, and that sauce. That sauce! That moment when I recalibrated my sweet tooth.

A simple recipe lurks within this multistep affair. Forego deboning a whole duck and instead buy boneless duck breast halves, preferably from the larger Moulard or Muscovy breeds. If you’re in a market that sells duck breasts, you’ll likely also find a prepared brown stock for the sauce. Then you need only follow the directions for sautéing the breast and finishing the sauce.

But, but, but: Debone a whole duck! It’s fun, and an easier task than deboning a chicken because the tendons cut like butter. A whole duck gives you not only two breasts and two legs but also some serious fringe benefits. You can throw the neck flap and copious fat trimmings into a saucepan and render them over low heat, producing about a cup and a half of duck fat as well as a handful of glorious cracklings to snack on. (You’ll feel like a Perigordian grandmother having a private moment.) The duck liver is a treasure, ready to sear and deglaze with sherry vinegar for a frisée salad, or with cognac for a quick food processor mousse with soft butter. Finally, the roasted carcass will provide the backbone for the best stock you’ve ever made.

John Kessler spent nearly two decades at the Atlanta Journal-Constitution, where he wrote about food and served as the newspaper’s dining critic. A graduate of Williams College, he attended L’Academie de Cuisine culinary school near Washington, D.C. and worked for several years as a restaurant cook and chef in Washington and Denver. His writing has received four citations from the James Beard Foundation as well as the National Headliner Award for best single subject column. He is working on a book with The Giving Kitchen — the beyond-expectation resource for restaurant workers employed in the Atlanta restaurant community facing unanticipated crisis . He currently lives and writes in Chicago.