Get a free recipe
Subscribe
It Smelled Like Summer Garbage. I Was in Love.
By: Mari Uyehara Illustrations: Adrian Mangel 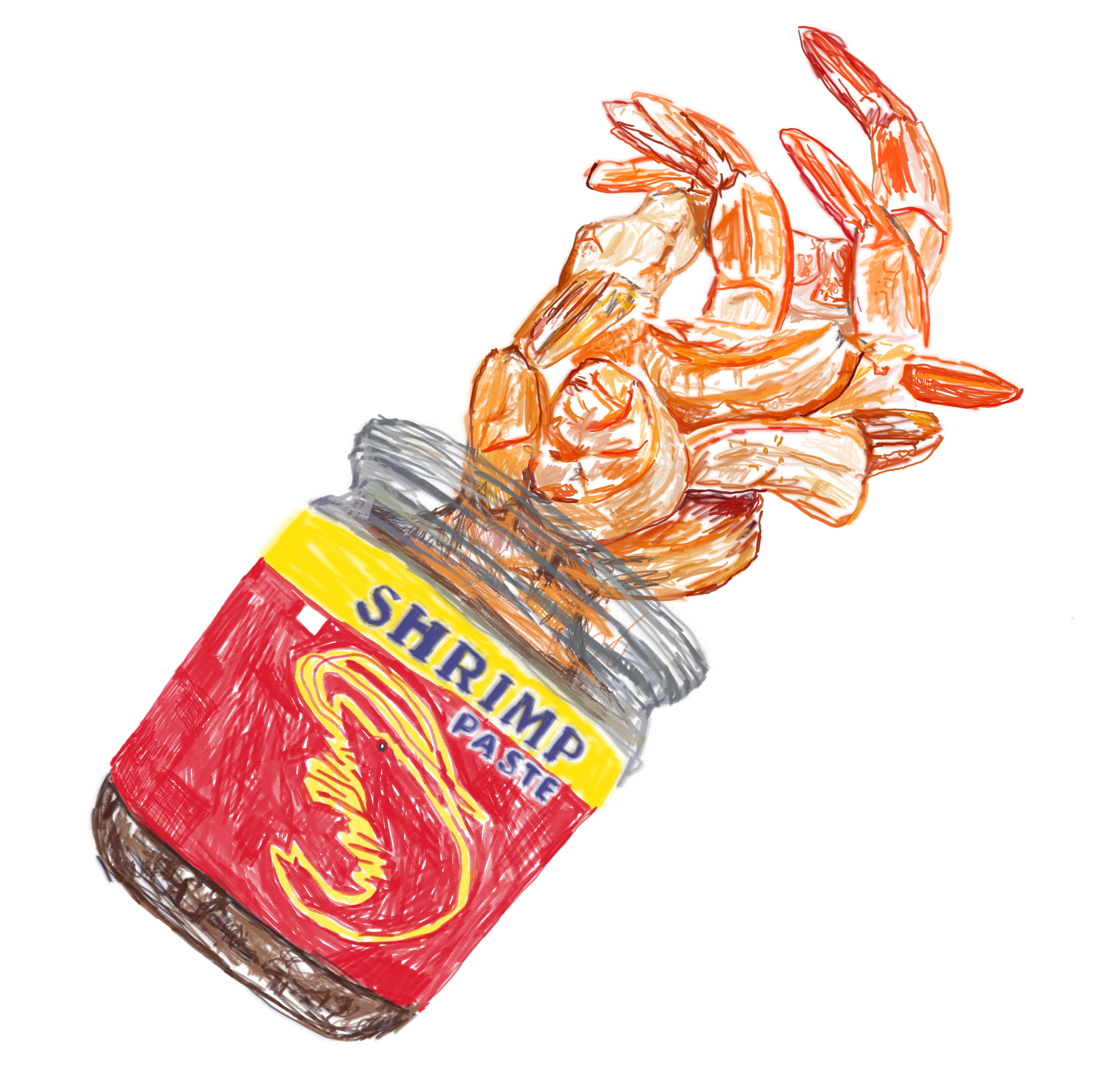 “Rotten” might be a fair descriptor. “August garbage pile” is not too far off either. But pungent and flavor-packed fermented shrimp paste, used regularly in cooking throughout Asia, amplifies all sorts of soups, sautées and mad saucery. Here’s how to cook with it at home.

I can understand, on an intellectual level, why people might not find kapi, the Thai fermented shrimp paste, appealing at first blush. It is, after all, an unsightly dense brown mash of shellfish, aged until their proteins have completely broken down. Twist open a pot and the aroma is powerful and unmistakably funky. Like a bag of trash on a hot August night. And yet, my mouth starts watering if I get a waft of that sweet funk. It’s Pavlovian; it’s primal. The smell of fermented shrimp paste means the most delicious food is not far away.

Unlike so many other fermented, umami-rich Asian condiments like miso or gochujang, kapi hasn’t made a cross-cultural leap into dishes like pastas and chicken wings. I’m guessing that its funk is part of the problem. My own stock of shrimp paste sits mostly unused in my refrigerator, used in between bouts of pounding down a curry with mortar and pestle. But I got to thinking: What if I start sneaking it into other foods?

The origin of my love for fermented shrimp paste is no mystery. In my mid-twenties, I lived in Thailand for a year, where kapi is at the base of many delicious things. Any Thai curry paste—red, green, yellow or orange—uses a dose of the stuff. In the large open-air markets, women sell mounds of different curry pastes out of large plastic tubs. Even though in America it requires trips to different stores for specialty ingredients, and a good 20 minutes of pounding by hand wherever you are, I love making curry pastes at home. Sizzle a few tablespoons of curry paste in a wok slick with hot coconut oil and you’ll get a tiny whiff of that fermented shrimp paste, all mixed up with the spices, aromatic roots, and spiced and spicy things—a hot curry is not too far away.

Kapi is also used as an underlayer in fried rice, or it can play star in chili dips (nam phriks) for raw vegetables. Shrimp paste can be different depending on the region, darker and more concentrated in the south and lighter in the north. It’s also used outside of Thailand, all over Asia, from China to Indonesia. Malaysia has its own version called belacan, used in a toasted condiment with chili, garlic, sugar and shallot; Filipinos fry it as a topping for green mango; and Korean cooks use salted, fermented shrimp to make kimchi. For such a widely used condiment, it seems strange that its powers haven’t been transferred to Western kitchens the way that dashi or sriracha has.

After poking around some old Internet message boards, I found out that people have used kapi in all sorts of non-Thai dishes—deviled eggs, meatloaf, chili, French onion soup and more—with good success. Surely, I thought, if a bunch of random home cooks on the Internet have found great off-the-label uses for kapi, chefs have found some genius ones.

I e-mailed a few chefs who specialize in both Thai and Western cooking to see what ideas they might have. “It goes well in spicy dishes,” said my friend Ian Chalermkittichai, who owns several restaurants in Bangkok, including Issaya. “It is a bit strange to be using it in Western dishes, but I guess it depends on the person.”

I had no better luck with Andy Ricker, who operates the Northern Thai Pok Pok restaurants in New York City and Portland, Oregon and writes about Thai home cooking. “I only use it for the standard stuff. Sorry,” he replied. I also came up empty-handed with Johnny Monis, who owns the Thai tasting menu restaurant Little Serow and the Greek hot spot Komi in Washington, D.C. “We don’t use shrimp paste non-traditionally, but we have often drawn a comparison between Thai shrimp pastes and fish sauces to garum, which is basically an ancient Greek version of fish sauce,” he said, offering an olive branch. Nancie McDermott, author of Real Thai and Simply Vegetarian Thai Cooking, was more encouraging. “It is an extraordinary boost in flavor, one which, despite its strong aroma and flavor, melts into other ingredients and joins a chorus without taking over,” said McDermott. “It seldom solos as much as it teams up.”

I decided to go forth anyway. Kapi is much cheaper than jarred anchovies, the Italian umami equivalent. I figured I could try it in a range of things: soups and meat dishes, and even pasta sauces. I used the standard type, Tra Chang, which you’ll see in most Asian markets for a couple of dollars. (There is also the Klong Khone, which is available to order online, but Ricker told me that most of the types available in the U.S. are about the same.) Traditionally, kapi is roasted in a banana leaf before being integrated into a dish. This simple technique is used to open up its flavor and aroma. But these days, aluminum foil is more common. McDermott recommends putting however much kapi you’re using, typically a teaspoon or tablespoon, in the middle of a piece of foil, folding it to create a square and then roasting it in a hot wok or skillet until its aroma is released, about a couple minutes.

The main piece of advice Monis dispensed was to start with a small amount. A little goes a long way. And you can, of course, always add more. Using one-quarter or one-half teaspoon amounts to start, I tried kapi in meatloaf and meatballs. I worked it into lentil soup, French onion soup and gazpacho. And I used it in place of anchovies in a simple Italian sauce with just fresh tomatoes, garlic and butter. With the meatloaf and meatballs, I played it safe, using just a small amount of the shrimp paste, which turned out to be nearly indiscernible. But trying to work the funky crumbly bits into something that didn’t melt together and couldn’t be adjusted later felt like a bit of risk.

Liquid-y meals were a better bet. For the lentil soup, the paste rounded out the flavors, giving everything just a little bit of a lift. It actually made the French onion soup taste beefier. But in the gazpacho, it flattened the flavors, dimming the brightness of the fresh blended vegetables and olive oil. With shrimp paste, it’s worth staying away from things that you want to have a fresher, brighter flavor, since it will erase that sharp edge; it works better with meaty, cooked flavors.

It was in the tomato sauce that kapi worked most brilliantly, giving the quick sauce made with pre-summer tomatoes a jolt of umami, that lip-smacking quality that makes something delicious. To think that I’d been gingerly parceling out pricey imported anchovies when a half tablespoon of kapi can deliver the same punch for a few pennies! I don’t think I’ll ever use a jarred anchovy for sauces again—I’ll squirrel them away for toasts and salads instead, where you can really appreciate the whole fillets. And as it gets colder, I’m going to try swirling it into chili and the base of shakshuka—all in between those weekend curries, of course.

There may be no better life hack than keeping frozen tablespoons of red curry paste, like this one from Bangkok chef-restaurateur Ian Chalermkittichai, in the freezer for throwing together a last-minute dinner with a ton of complex flavor. Traditionally, red curry pastes are used with chicken, beef and roasted duck, along with vegetables like eggplant, green beans and fresh herbs. To make a coconut-based curry, heat coconut cream until the oil separates over medium heat, fry the paste until fragrant and then add coconut milk and other ingredients to simmer until cooked through.

In this simple pasta sauce, kapi (Thai fermented shrimp paste) subs in for more expensive Italian anchovies. The umami-rich paste is very concentrated, so start by using a conservative amount and add more to taste. If you want a spicier kick, add some chili flakes when heating the kapi and garlic, or mix in black olives and capers right before adding the tomatoes for a Puttanesca-like mixture.