Get a free recipe
Subscribe
Doughnut Lassies on the Front Lines
By: Allison Robicelli 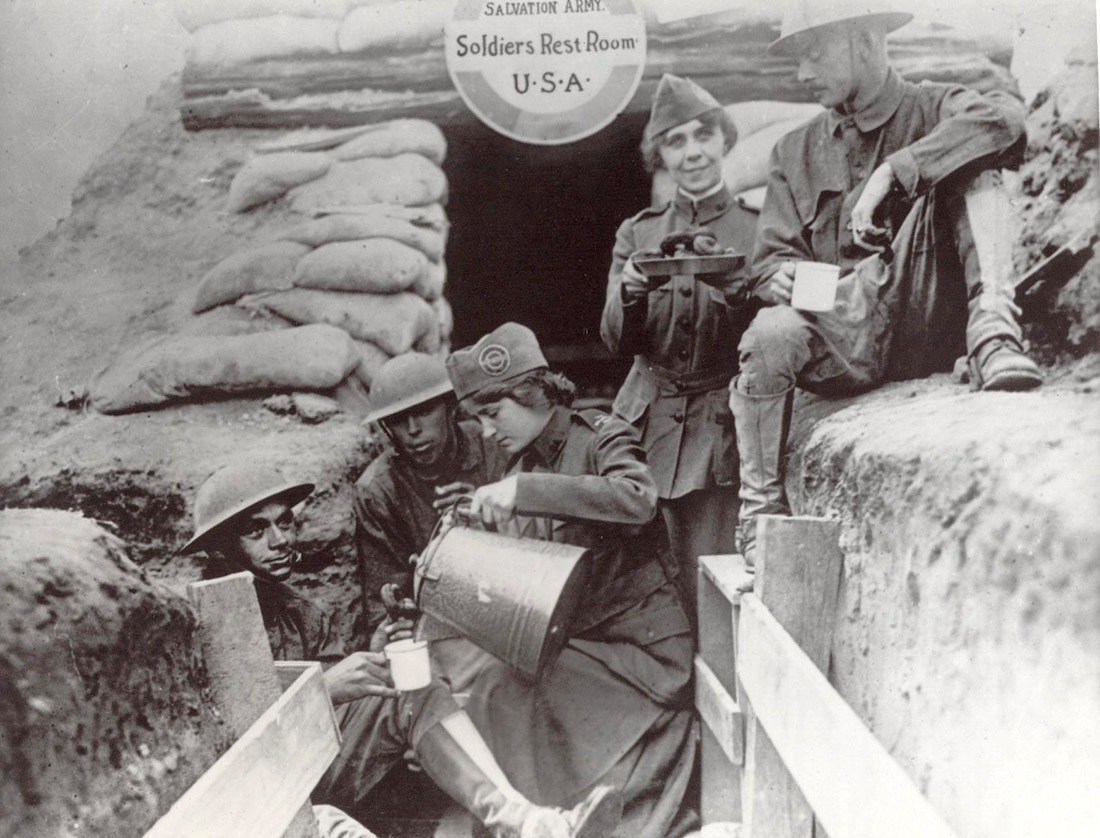 Doughnuts may seem like a timeless piece of Americana, but they became popular in France, thanks to some resourceful young members of the Salvation Army.

When was the last time you took a good long look at a doughnut and said “thank you”? As we speak, there are doughnuts sitting out in break rooms and deli cases from coast to coast, going just a bit more stale from minute to minute, feeling overlooked and unloved. They’re stacked in neat little rows in wire baskets, watching you grab coffee each and every morning, wondering when you’re going to abandon that paleo life so you can be together again. They’ve become a staple of our daily lives we’ve taken for granted, but until the 1930s, they were nothing more than an occasional treat made in Dutch communities. So what did it take to rocket doughnuts out of obscurity and into our daily lives? Nothing short of the entire freaking world going to war, and two young women who risked their lives for fried pastry.

Our story begins on the European battlefront of World War I. Amidst the bombs, the gas, the terror and carnage, there was one army whose mission was not of destruction, but of comfort and care: the Salvation Army. The Protestant mission was well known for its work in city slums, where they built shelters and soup kitchens that cared for the destitute. In 1904 the Great Galveston Hurricane inspired them to mobilize those efforts, creating a battalion that would provide immediate care in the wake of major natural disasters.

In a few short years the greatest disasters would come not from acts of God but at the hands of men, in the form of war, yet the response was no different. There was a great war and great suffering in Europe, and the Salvation Army would attend to it. They were a small company, but they were mighty, and the impact they would have would be tremendous. Twenty-two Salvation Army officers left the United States for the trenches of France in 1917, four of them women. Their mission: to make the boys forget about the unspeakable horrors of the battlefield in a good, wholesome, completely nonsexual way. They’d pass out mugs of hot cocoa while talkin’ ‘bout Jesus. They threw the most banging dance party in France, spinning hot tracks on the old Victrola. They made fudge.

And when morale still needed boosting, excess rations were collected to make a simple dough: flour, sugar, eggs, baking powder, canned milk. Bits were pinched off and hand rolled into simple crullers, then cooked in a soldier’s helmet filled with hot lard. The operation grew until the same two women were frying upwards of 2,500 doughnuts each day, which is possible when you stop frying things in helmets and ask the army to give you an actual pan to cook in.

The soldiers who were lucky enough to come home began requesting hot doughnuts from their wives and neighborhood bakeries, and soon they became a permanent part of the American culinary landscape. Their enthusiasm for this simple fried pastry was so tremendous that it begat the nickname that still, over a century later, means a soldier who fought in the Great War: doughboy. Twenty-one years after the first doughnut was fried in the trenches, the Salvation Army faced another problem: The Great Depression had stretched their efforts with the poor quite thin, and with more people than ever struggling financially, donations were down. But when you’re an organization built of the kind of people who can change history with four hands, food scraps, and an old helmet, this was child’s play. They turned on the fryers and declared far and wide that the first Friday of every June would henceforth be known as National Donut Day: a day where dropping a few cents on a piping-hot doughnut wouldn’t just help the needy but would also serve to honor the brave lassies who marched to the front lines of one of the most horrifying events in history.

You don’t need to wait till National Donut Day to fry up some of these national treasures and honor the women who saved the world with carbs, but do make a point to spread the love around by making a few extra for friends, neighbors, the guys who work at the shop on the corner, as it is a documented, historical fact that doughnuts are meant to be shared so that they may spread joy. And raise your Venti half-cafe soy latte up high and say, “Thank you, doughnuts!” for all that they have done not only for all of us, but for freedom.

Photos courtesy of the Salvation Army

When writing this recipe I went through several drafts, tweaking here and there and trying to improve on the original cake doughnut recipe handed down by the doughnut lassies. Then I realized what I had been missing all along: There is no need for improvement or standardization, because the very thing that makes these doughnuts wonderful is their sense of necessity. You don’t need a fancy doughnut cutter; you don’t need a mixer; you don’t need any hacks or secret ingredients. If they’re a little oddly shaped or wonky-looking, that’s okay. Perfection isn’t the point here: It’s all about the intent.

Call your neighbors and tell them you’re bringing them some warm doughnuts. They’re best when they’re fresh, and better when they’re shared.