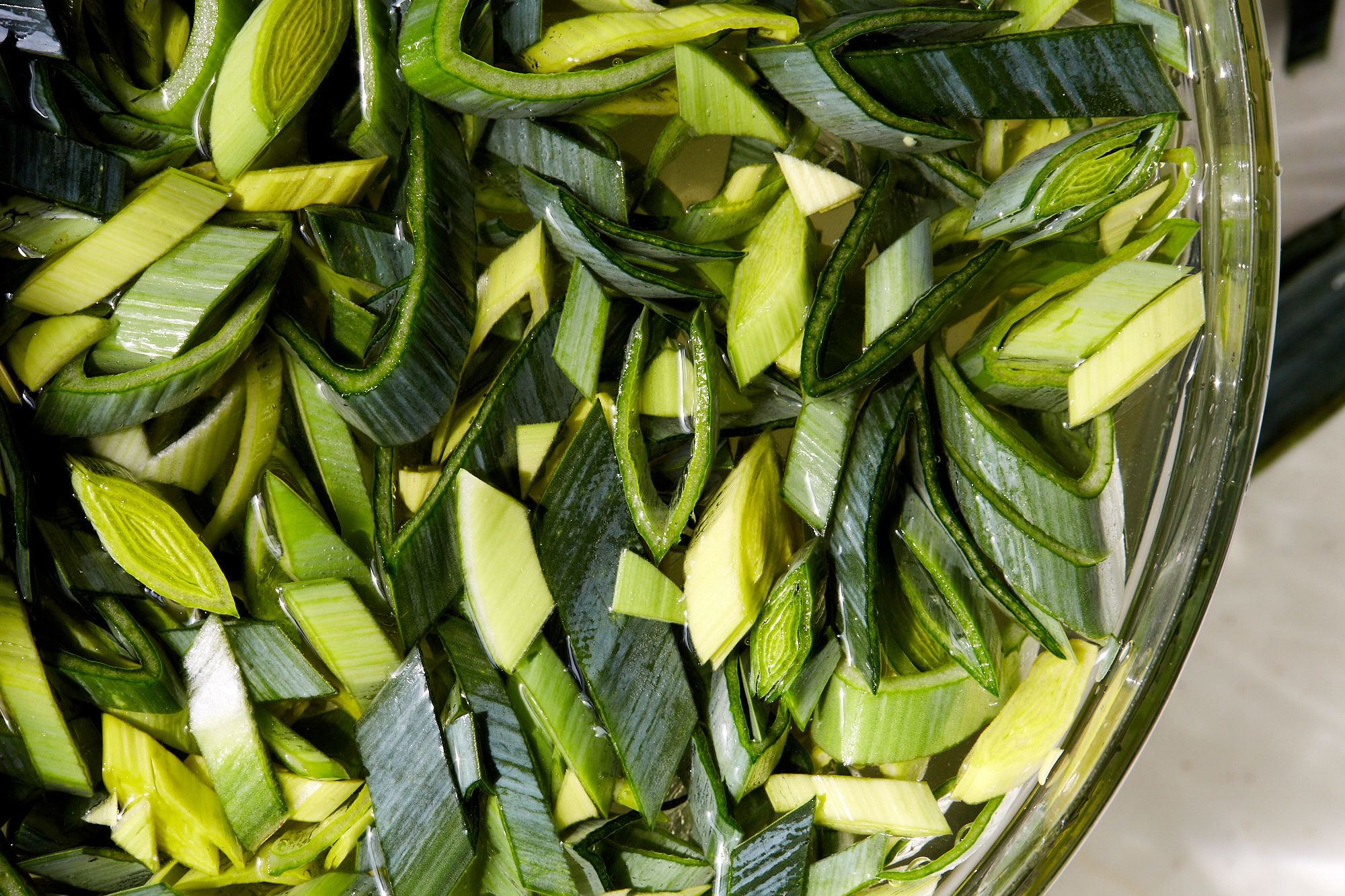 Cooking without a recipe can be wild and reckless. Anything can be questioned. Rules can be broken. You can bastardize things you’ve already tried, amalgamate dishes you love into irresistible culinary monstrosities, turn the mundane into something great. When it’s time to make dinner, my recipe of choice is “throw something together with whatever crap I have in the house.”

One particular favorite non-recipe in my household is a dish that I’ve come to refer to as “That Thing With the Leeks.” It all started with, naturally, a bunch of large leeks, one of my favorite vegetables to buy and then forget about until I find them liquefied in the bottom of my produce drawer.

Often, you’ll see the delicately flavored leek used as a background note in places where it seems like onions might be too strong. I’m sure that you’ve probably eaten countless leeks in your life, yet if you were asked to describe their flavor, you’d struggle, thanks to their perpetual second-banana status. But why should we treat them like the Muzak of the allium world when they have their own distinct, fresh sweetness, full of character and grassy-green color?

Most recipes tell you to cut off the green tops and throw them away, an act which is verboten in my teeny, tiny kitchen. Throwing out perfectly good food is a sin, and I didn’t pay $3.99 per pound for organic leeks to be tossing half of them in the trash. But more importantly, leek greens are much more than “perfectly good food”: Prepared well, they’re utterly spectacular.

You’d never know this if you blindly subscribe to the fake leek news, perpetuated by years of recipes, which contends that they’re “too tough to eat.” Know what easily fixes that problem? Cooking. Throw them into the pan to soften for few minutes before throwing the white parts in. No special prep, no massaging them with salt, no soaking them in an excessively complicated brine. Just cook the damn things. The first time I made soupy leek rice (recipe below), I slowly cooked the leeks with a good amount of butter; the next time I braised them in olive oil. Once I threw a few tablespoons of schmaltz in there, and another time I started it off by rendering bacon fat in the pan, reserving the meat to crumble over the top. All of these were, in their own special way, great decisions, confirming the fact that I am a genius.

Next to go into the pan was half a bag of Arborio rice I found hiding behind my secret Oreo stash. I don’t make a lot of risotto because, with two adolescent boys living in the house, the hours between 3 and 8 p.m. are a nightmarish hellscape where my biggest priority is to make it to bedtime without someone requiring stitches. I have no time to be standing by the stove, gingerly stirring while adding small ladles of white wine and fresh stock. I do have the time to dump the rice, wine, and stock into the pan before walking away, which is what I did.

“I’m sure that you’ve probably eaten countless leeks in your life, yet if you were asked to describe their flavor, you’d struggle.”

Once the rice had absorbed all the liquid in the pan, in went a bag of shredded gouda. I have no recollection of ever buying the shredded Gouda, no idea what I had intended to do with it, but it was there and needed something to do. As fate would have it, it was exactly what the dish needed—adding a little bit of nuttiness to make an otherwise mellow dish feel a bit more alive.

It’s not pretty, but scooped into a bowl and eaten in front of the television, this non-recipe hits all the right notes. But just like mac and cheese or potato salad, this is merely greatness upon which more greatness can be built. You can slip in some eggs, à la shakshuka. I like leaving them a bit runny, scooping up my portion the moment it comes out from the broiler and violently stirring them into the non-risotto, where they cook into a creamy sauce. Sometimes I let the pan sit out for 10 minutes or so, allowing the dish to set up like a rice cake, letting the eggs gently heat through til firm and jammy. Depends on my mood.

Once you get the basic gist of it, you’re free to alter the dish as you wish. No risotto on hand? I’ve done this with plain white rice, rinsed sushi rice, and even orzo, and it’s been pretty damn solid every time. Can’t find shredded Gouda? Bold, semifirm cheeses, like Asiago or mild cheddar, work well, as do chopped-up Babybel cheeses—another item I don’t remember ever buying but for some reason is always in my house. I’ve even doubled the stock, doubled the leeks and made this a soup. Add bacon, leave out the eggs, sprinkle with crushed-up potato chips—throw caution to the wind and follow your heart. This isn’t my recipe anymore. It’s yours.