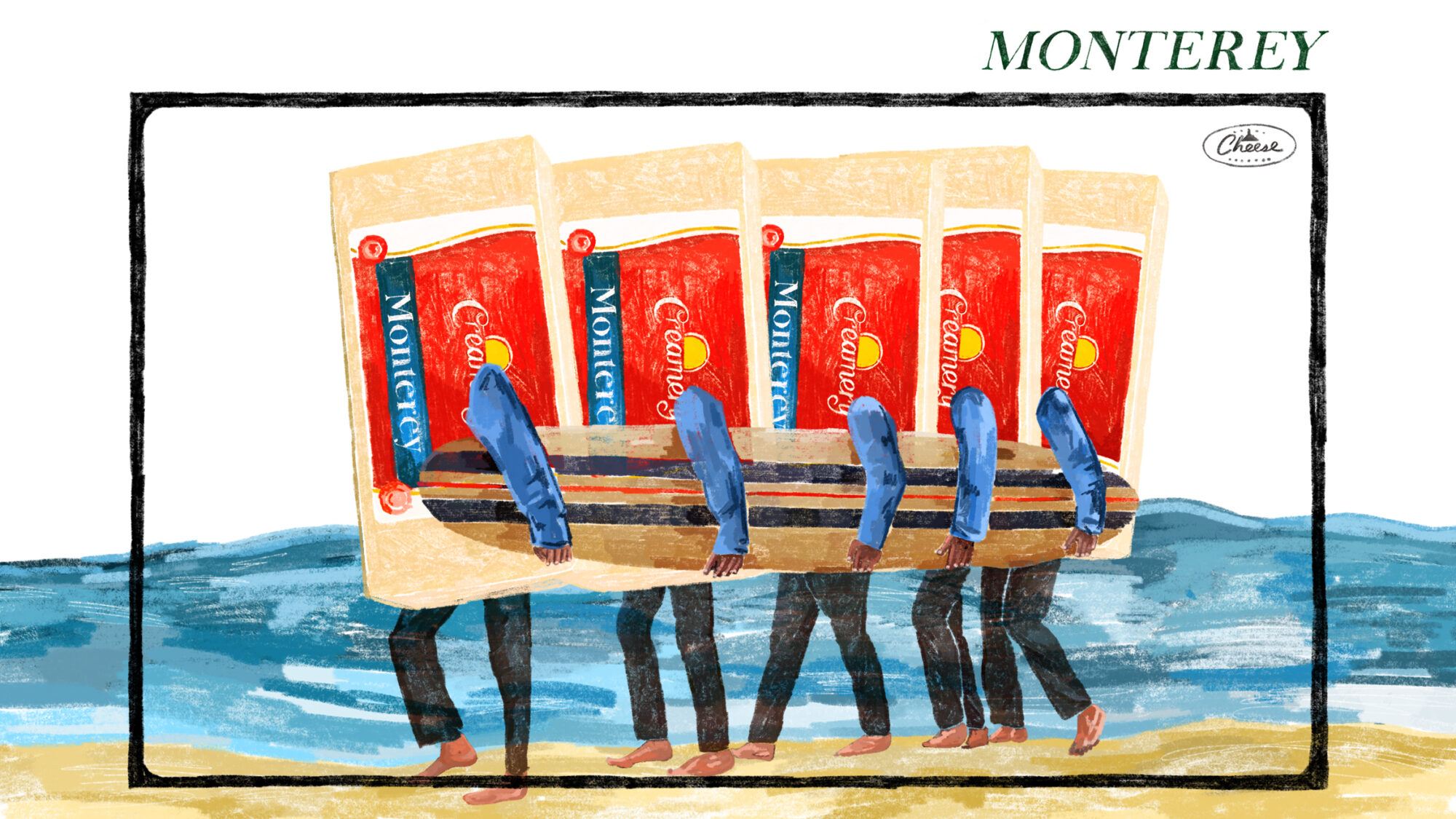 Gather ’round, America’s melting cheese has a story to tell.

This is a tale about a great American cheese, a cheese so obscure almost nobody knows it. A hard-to-find, sometimes absurdly expensive cheese. A delicious and sweet buttery beauty of a cheese, made in two officially recognized styles, each with a California pedigree and die-hard fans whose praise always fails to break through to the mainstream.

It’s Monterey Jack. And if you think I am kidding, please come cut a chunk of the fruity, amber-hued, two-year-old wedge of Special Select Dry Jack from Vella Cheese now sitting on my kitchen counter, which cost me $35 plus shipping.

Most people who care about food recognize that there are higher levels of quality in other commodity cheeses—that you can buy Grafton Clothbound Cheddar or the real-deal Swiss, called Emmentaler. But Monterey Jack, born in California’s Monterey County but now made around the country, hasn’t yet been so lucky: Though you’ll find artisan versions made all over the country—mostly small-batch products sold at farmers markets or markets that buy locally—it’s still seen as a flabby rectangle good only for quesadillas.

“If you say Jack, they’re thinking just cheap commercial cheese,” says Gordon Edgar, the author of two books on cheese, a judge for the American Cheese Society, and the current monger in chief of the cheese counter in the back of San Francisco’s famous Rainbow Grocery Cooperative. “Nobody’s ever called me to talk about Monterey Jack,” he tells me when I call him to talk about Monterey Jack.

If you do, he’ll happily tell you all about this cheese, a family of cow’s milk cheeses made using what’s known as a washed curd process that originated in Spanish Colonial–era California. As in, after the milk is heated with specific cultures and the curds have separated, some of the whey is drained off and replaced with cooler water, resulting in a sweeter, softer cheese.

Edgar can tell you all about the folks who make high-quality “high-moisture” Monterey Jack—that’s the kind that’s young and melty and sliceable. He’ll explain Dry Jack, today a harder, drier version said to have gotten its start when early-20th-century Northern California cheesemakers, mainly Italian immigrants, made too much cheese. They took cues from their homeland, coating the wheels in salt and oil for longer storage.

Let a wheel of Jack cheese sit for a couple of seasons, it turns out, and you end up with the opposite of the mild, semisoft white supermarket squares, the majority of which taste like very little at all. A Dry Jack aged for many months—or even many years—morphs into a beautiful blond round that’s subtly sweet and salty and buttery. It’s best treated like Parmigiano-Reggiano or Pecorino Romano—eaten straight in chunks, grated over pasta, or shaved over runny-yolked eggs.

In fact, Dry Jack actually grew into its own after World War I, when Italian Americans across the country used it to replace the Italian cheeses that weren’t being imported into the United States.

While there are Dry Jacks made throughout California, as well as Vermont, Minnesota, Baltimore, and elsewhere, Gordon Edgar is one of many experts who considers Vella’s to be a national treasure, both in flavor and folklore. “It’s a California classic, an American original,” he tells me. “It’s a regular part of my mission as a Californian to push that cheese.”

(Vella, an 88-year-old, third-generation creamery in Sonoma County that uses a 1904 stone brewery building as the base for its cheesemaking, is also credited with the 1980 invention of Pepper Jack, aka a Jack cheese infused with hot chiles.)

Yet even a plain old soft square of Monterey Jack made by a maker who cares—and who uses milk higher in butterfat than the minimum the USDA requires—can be great eaten straight, just like fresh mozzarella. It can be creamier, too, with a higher moisture level that more commercial makers don’t dig because it won’t last as long on the shelf.

Take the Jack made by Tony Hook, who runs Hook’s Cheese Company in Mineral Point, Wisconsin. Hook has been making Monterey Jack since the 1970s, he says, when he learned how to make cheese working for a company that supplied Midwestern supermarket chains. Today he works for himself, making a premium high-moisture version—Saxelby Cheese in New York City sometimes special-orders it for local chefs—as well as a Dry Jack–style cheese made with goat’s milk called Galway Bay.

Hook buys the best milk he can get from nearby farms, which is important for a young, mild cheese like Monterey Jack, he says, where “you’re really tasting the flavor of the milk.”

Somewhere in between Hook’s Monterey Jack and Vella’s Special Select is the Monterey Farmstead Jack made by Beau Schoch, currently the only person making this cheese in its original terroir: the temperate coastal valley of California’s Monterey County, about two hours south of San Francisco. Once prime dairy land filled with operations like Schoch Family Farmstead—a third-generation dairy farm—today it’s where most of our supermarket salad greens, asparagus, and strawberries are grown.

Schoch makes a raw-milk Monterey Jack with a natural rind, created using the still-warm milk flowing in from the milking parlor manned by his father. Nutty and complex, aged anywhere between 60 days and whenever Schoch thinks it’s ready, these wheels don’t taste like any Monterey Jack you’ve met before.

I visited Schoch’s family farm in Salinas the summer before last, when the hills were green and the June fog had passed, to see how he made his cheese. Inside his caves, tidy rows of aging wheels looked just like those in the dairies I’ve been to in the Alps. (Which is appropriate, given that Schoch’s grandfather moved to the United States from Switzerland in the 1940s.)

Schoch makes many other kinds of cheese, and he admits that Monterey Jack is still his hardest sell because of people’s preconceptions. But he can usually change their minds, he says, once he lets them taste it.