Get a free recipe
Subscribe
Doctor’s Orders, With a Grain of Salt
By: Andrew Friedman Illustrations: Vance Lump 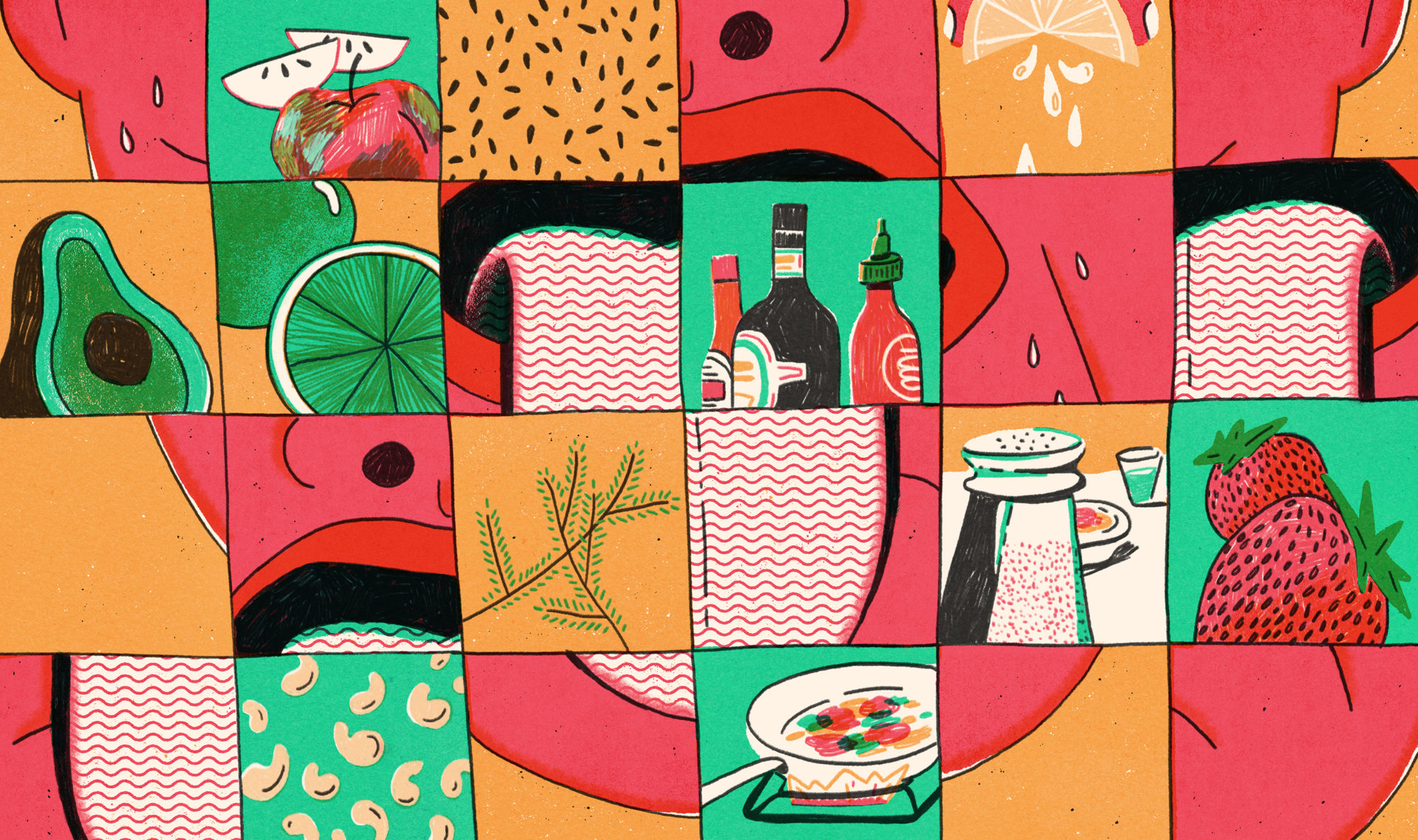 Can a food writer with a passion for capers and sushi really train himself to eat only a teaspoon of salt per day?

“How are you doing?” asked my friend Liz.

I thought about her question for a moment, gazed longingly into the distance, and answered, without irony or sarcasm, “I miss salt.”

That was summer 2016. That spring, I’d been diagnosed with a cardiomyopathy, or irregularity of the heart. I’ll spare you the medial jargon: Suffice it say that my ticker is slightly enlarged and therefore doesn’t dispense enough life-giving blood with each contraction. “Watching my sodium” wasn’t the only concession the condition demanded; my newly enlisted cardiologist commanded me not to redline during tennis or running, to stop training for an upcoming marathon, and to replace normal iron pumping with a regimen of embarrassingly low weights and high reps.

But once I adjusted to these prescriptions, got some necessary medication into my system, and overcame the temporary fear of exercise, none of the restrictions diminished my daily life the way my doctor’s sodium mandate had. In layperson terms, salt absorbs liquid, which makes the heart work harder than it should and can lead to water retention. (This is why the condition is also known by the scarier term congestive heart failure.) I didn’t mind reining it in at home, but what about restaurants?

“I wouldn’t eat in restaurants,” he said.

I explained that writing about chefs, which is how I earn my living, means dining out, sometimes extravagantly. The good doctor countered that two reasons restaurant food generally tastes better than home cooking are the liberal applications of fat (mainly butter) and salt, which helps many ingredients reach their full flavor potential. As a collaborator on more than two dozen chef cookbooks, I was already wise to this; I’ve spent plenty of time in professional kitchens and witnessed line cooks shoveling salt into countless preparations with utter abandon.

What if, I suggested, I was really, really well behaved at home?  Could I “save up” the sodium and blow it all with dinners out?

“It’s more of a daily thing,” he countered before finally relenting and allotting me two restaurant meals per week.

That 2,300 may sound generous, but milligrams measure out more like yen than dollars—in terms of actual table, kosher, or sea salt, it’s one measly teaspoon.

If you are, as I am, a “food person,” one who dines out often and cooks passionately, then you probably are violating generally accepted sodium guidelines. The American Heart Association recommends that adults consume no more than 2,300 milligrams of sodium per day, which was the limit my doctor imposed (the average of what Americans actually consume is closer to 3,400 milligrams per day). That 2,300 may sound generous, but milligrams measure out more like yen than dollars—in terms of actual table, kosher, or sea salt, it’s one measly teaspoon, and that’s before adjusting downward to account for sodium naturally present in raw ingredients and packaged goods, which can pile up quickly: Most commercial breads have at least 100 milligrams per slice. Boar’s Head Ovengold Roasted Turkey Breast has 360 milligrams per 2-ounce serving. 1 tablespoon of Heinz ketchup has 160; the same amount of Kikkoman naturally brewed soy sauce has about 920 milligrams, and even the brand’s low-sodium variety contains 575. Many foods widely praised as healthful present conundrums to the sodium-sensitive; beans and legumes are prized in diets that originated everywhere from Blue Zones to South Beach to the Mediterranean, but most canned varieties are loaded with sodium both as a preservative and as a flavor booster; half a cup of Goya black beans, for instance, contains 460 milligrams. And so the first thing I did to adjust to my new dietary reality was take as many preparations as possible into my own hands. For example, research led me to a method of cooking dried beans in a low oven with water and aromatics that yields delicious results, with no sodium whatsoever. I also stopped adding salt to my pasta cooking liquid, draining it a little early and letting it finish cooking in a sauce, absorbing its qualities.

But there’s no way around it: Less sodium means less flavor, and there aren’t always workarounds. A steak or burger bound for the grill without a coating of salt not only won’t taste as good; it also won’t develop the crust so many of us love. Some of my favorite prepared foods, like sushi—with its combination of nori, rice, and fish, not to mention the requisite soy sauce and accompanying cup of miso soup—can blow one’s daily sodium allotment in one sitting.

So Phase 2 was developing an arsenal of high-impact ingredients that didn’t require amplification. If you think of, say, hot, sour, salty, and sweet as four engines on a plane, then I still had three left to call on to land my aircraft safely on the runway of good taste. Acid was an obvious go-to: For example, a squeeze of lime over grilled or cast-iron-blackened fish, especially salmon. Or vinegar-heavy dressings on salads. I also began turning to all kinds of heat, such as chiles, Tabasco (which also delivers a punch of acid), and cayenne, and finished pretty much everything with fresh herbs. Sugar comes with its own nutritional baggage but is rarely accompanied by much, if any, sodium, so I made room in my mornings for extra fruit and occasionally splurged on dessert later in the day.

After a few months, my retrained taste buds began deriving pleasure along other sensory channels—the way, say, hearing deepens for somebody robbed of their eyesight. Texture was elevated from a bonus to a priority: I am head-over-heels in love with Siggi’s strained yogurt, with its near–panna cotta level of creaminess. Ditto avocados. Unsalted, unroasted cashews, it turns out, are plenty crunchy and tasty. Ground flax seed makes a great addition to salads, as do sunflower seeds.

Put all this together and a new world order emerges: Now, rather than a breakfast burrito, an ideal morning meal might be two eggs scrambled, topped with slivered avocado, nonfat sour cream, home-cooked black beans, and a few dashes of hot sauce—creaminess, acid, heat, and a negligible amount of sodium. I’ve also developed a ridiculously healthful and filling breakfast smoothie of unflavored Jarrow protein powder, dried peanut butter (a sly alternative to the real thing with a fraction of the fat and sodium), flax seed, soy milk, raw rolled oats, a sliced frozen banana and a squirt of honey. It drinks like a milkshake and fuels you till midday.

Lunches have become simple and seasonal: a salad buttressed with grains and/or fish or poultry in the summer; roasted vegetables or homemade soup in the winter. I cook them with almost no salt, then add a dash of hot sauce or a squeeze of lime.

As satisfying as my food is to me, it registers as a little off to everybody else.

Because I work at home, I usually cook dinner for my family, who remind me daily how most people eat. As satisfying as my food is to me, it registers as a little off to everybody else: My chili is spicy, but the individual ingredients don’t pop as much as they used to because I don’t season at each stage of the cooking process, as I’d done my entire life; chicken piccata misses its capers as much as I do; and there’s less feta than there once was in one of my kids’ favorite dishes from my repertoire: spanakopita. Our teenaged twins don’t complain verbally, but they surreptitiously reach for the salt every night. It’s not the same as having it cooked into the food, but everybody gets what they need.

I’m lucky, at least so far: My body has responded so well to medication and increased exercise that my heart now pumps at borderline normal levels. My doctor has eliminated all but the most extreme physical limitations—I can run as fast as I want, lift heavy weights again, and leave it all on the tennis court. A marathon is forever out of the question, but so it goes.

I still have to watch my sodium and always will. But that’s OK. In fact, I kind of like it. I used to only enjoy cooking for others, but this ongoing puzzle-solving produces a similar dynamic: I’m a private chef pleasing a client of one, a kitchen linguist developing a new dialect with which to communicate in the language of food.