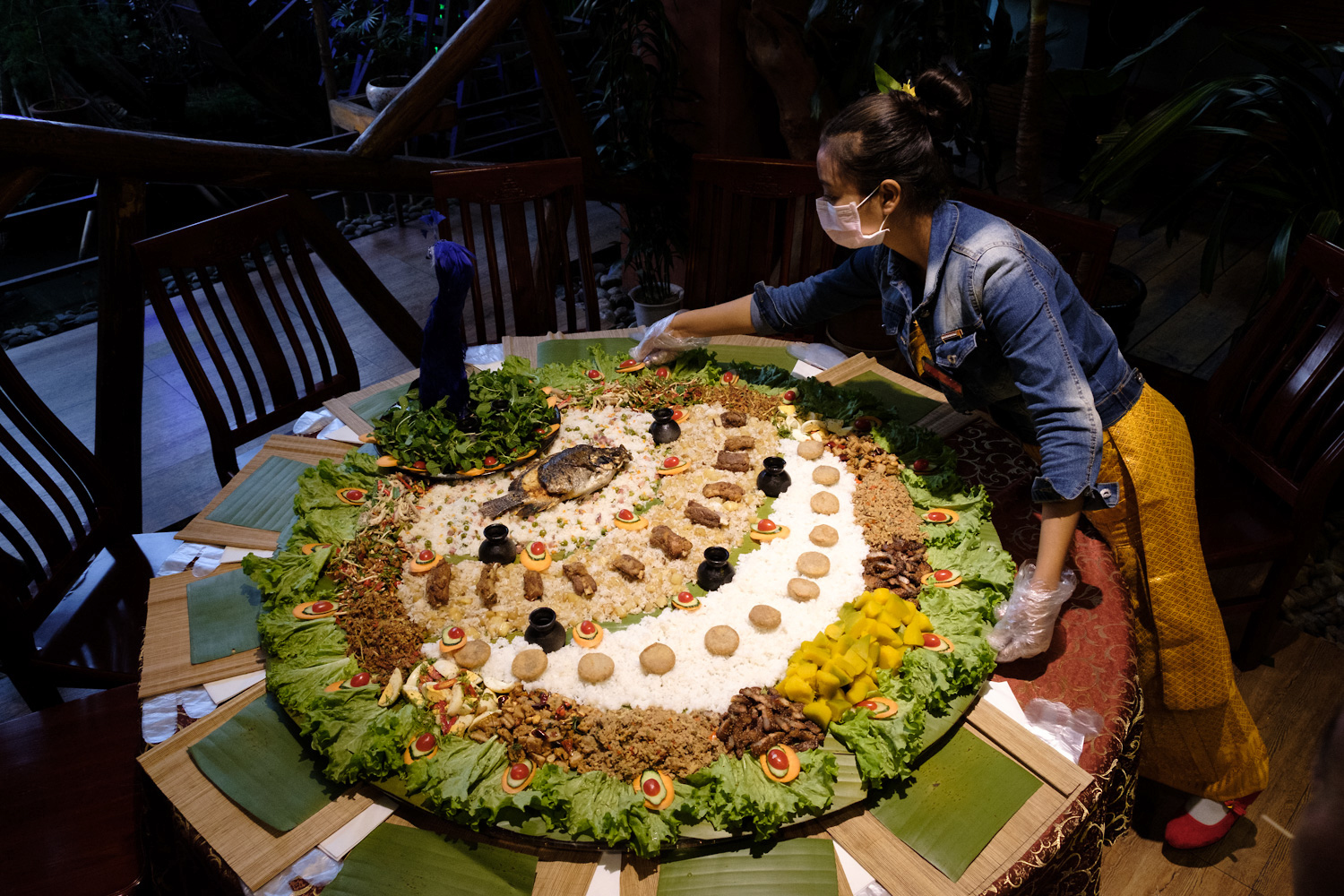 In Yunnan Province, China’s minorities are opening restaurants—some with dancing!—that trade on their historic stereotypes.

The entrance of Jiangshan Buluo Restaurant is flanked by rows of buffalo skulls mounted on sticks and lit from below to give them an eerie, sinister quality. The half dozen buildings that serve as the restaurant’s private dining rooms have thatched grass roofs, as if they were in a rustic village. Just inside the door to the main building, a long horizontal photo depicts a young man—his face painted with streaks of bright red paint, his hair wild—yelling menacingly as he leans over a long drum, arms stretched wide.

These are the symbols of China’s Wa minority, a historically marginalized ethnic group with a population of about 430,000 who live in the mountains in Yunnan Province, near the border with Myanmar. For centuries the Wa cultivated a reputation as fierce fighters—and even head hunters—in order to keep the Han Chinese majority away from their lands. Now they use these same symbols to draw them in, trading on their “exotic” way of life to take advantage of China’s growing tourism market.

Inside the restaurant, tourists gather at long communal tables to try traditional Wa dishes: Popular options include platters of spit-roasted suckling pig, bowls of porridge-y rice mixed with shredded chicken and herbs, and local rice wine served in bamboo cups. Once everyone has been served, the teenage waiters and waitresses head to the stage to perform choreographed dances to pop versions of traditional songs. As lights flash, they dance in lines, stomping their feet, and the young women swing their hair forward and back, like slow-motion head-banging. When the songs are done, the diners are invited onstage to take part in games. Scenes like this play out every night in restaurants all across Yunnan. The small province is home to 24 of China’s 56 officially designated minorities, or minzu, who make up less than 8 percent of the country’s population. Over the past three decades, minority culture has become one of Yunnan’s main tourist draws. Posters in local airports show willowy Dai minority women in crop tops and sarongs splashing each other with water; villages set up embroidery and weaving workshops and offer “tours” designed to get visitors to buy pillows and table runners; old farming villages build gates and charge admission, prompting locals to turn their homes into guesthouses and cafés. In the most popular tourist regions, the government has even built theme parks designed to look like minority villages.

Not all of Yunnan’s minority-themed restaurants follow the dinner-theater mold. Some rely less on song and dance and more on creating a unique ambience. In the city of Mangshi, about an hour east of China’s border with Myanmar, the popular Taste of Dehong Restaurant highlights the foods of the Dai, Jingpo, and Wa minorities. Their specialty is a set meal served in the shape of a peacock, with dishes arranged on the table to look like elaborate feathers and a blue papier mâché peacock head at one end. (The restaurant keeps three live peacocks in an enormous golden cage in the main courtyard.) Here the gold-sarong-wearing waitresses don’t dance, but they do spend part of the evening going from table to table singing drinking songs with the guests.

You’ll find a similar setup at the Hani Impression restaurant in Menghai, in southern Yunnan (which specializes in the food of the Hani minority), where the private “rooms” are open-air pavilions built on stilts and waiters with guitars sing local love songs to guests enjoying strips of jerky-like dried beef, soups made from foraged greens, and bowls of potato stewed with sour pickles.

The fact that these restaurants adhere to the same mold is not a coincidence; towns in China hoping to increase tourism copy their more established neighbors. Even the kinds of songs you hear in each restaurant follow a similar script. “There’s almost a standardization of the ‘welcoming guests’ and ‘drink’ songs,” says Furman University professor Tami Blumenfield, who studies Yunnan’s Mosuo minority. “It’s kind of a requirement of Chinese culture right now that if people come, you need to pull out those two songs and also the ‘Farewell, friends from afar’ song.” Just how authentic these performances are depends on the venue. At Jiangshan Buluo Restaurant, the dances and songs are clearly based in Wa tradition, despite the obvious performative quality of the show. Similarly, the songs at places like Taste of Dehong are based on local traditions, but they are often sung in Chinese instead of the local language, and the tunes are changed to sound more mainstream.

As these kinds of restaurants and attractions have become increasingly popular in Yunnan and other parts of China, scholars have debated whether they are beneficial or detrimental to local minorities. On the plus side of the argument is the fact that these schemes benefit the local communities financially and allow them to make money from their cultural heritage by celebrating their differences instead of being marginalized by them.

“There has been a shift where suddenly the ‘exotic’ nature of being a minority is a positive, and your mainstream, urban Han Chinese tourist is interested in trying something new,” says professor Jenny Chio, an anthropologist at the University of Southern California who has studied ethnic tourism in China. “I think partly it’s been the result of, for lack of a better phrase, good government PR, because ethnic-tourism development and celebrating ethnic minority groups is a really important part of the Chinese state and its efforts to maintain unity and social stability.” To Westerners, these shows look fake and canned at best and exploitative at worst. But this is not how the Chinese see them, explains Chio. “One of the things that a lot of Western tourists would say is, ‘These restaurants aren’t authentic. They’re just performances, and if you perform it, then it’s not actually the real thing.’ But performing culture isn’t necessarily inauthentic in a Chinese context.”

The cookbook author Fuchsia Dunlop, who has led food tours in the region, sees these kinds of performances as a mixed blessing. “There is the problem of the ‘Disneyfied’ experience, where it’s a kind of pastiche of traditional culture,” she says. “But at the same time, in a period of dramatic change, when there’s a risk of losing a lot of traditions, I think anything that makes people proud of their culture and gives them an incentive to preserve and promote it, and the ability to make a living doing this, is a good thing.”

That said, the exoticized way the groups present themselves still looks problematic to the Western eye, particularly when it leans heavily on stereotypes with a sexual component. “In many cases, there’s a level of flirtatiousness that’s like, ‘Oh, look, these people are minorities, so we can joke about these kind of things,’” says Blumenfield. “This is consistent with the [Chinese] image of minority culture, that they are more sexualized and feminized.” Chio also wonders if this setup could potentially prove problematic for minority groups in the future. “The risk is that these stereotypes just become further entrenched and that minorities are not seen as being able to do anything but this,” she says. “That is the danger: that the restaurant version of being Wa becomes the limit of what you can do when you are Wa.”

Perhaps the strongest argument in favor of these restaurants lies in the food they serve. For centuries, Han Chinese would never have touched minority foods, many of which were considered taboo. But at these restaurants, tourists feast on a wide variety of local dishes.

In the hot and humid areas where Yunnan borders Myanmar and Laos, they can include astringent, sour pickled bamboo shoots, which are used to flavor stir-fries and soups; or searingly spicy fresh chiles, which are added to everything from minced pork cooked in a banana leaf to grilled fish and are often accompanied by fresh herbs that are more closely associated with Southeast Asia, like sawtooth herb and Vietnamese coriander. In the north, where Yunnan borders Tibet, popular dishes include yak-meat hot pot and plates of momos, or dumplings. Many restaurants across the province even feature salads of raw, fresh vegetables or have local cheese dishes on the menu—both foods that were traditionally considered the fare of “barbarians” but are now enjoyed as “local specialties.” For some visitors to Yunnan, the local foods are increasingly becoming more intriguing than the performances that accompany them. “Food has always been part of the travel experience for [the Chinese], but there’s more awareness of it, and more pride in China’s diverse traditions,” says Dunlop. “I’ve met a couple of small local food producers who have actually introduced themselves to me as ‘makers of intangible cultural heritage,’ using that U.N. term.”

Appreciation for these producers may ultimately help normalize minority cuisine to the point where restaurants can dispense with the song-and-dance routines altogether. You can already find this happening in larger cities, where residents from many minority groups live side by side with Han Chinese.

At Yingjiang Dai Flavors Restaurant in Kunming, the provincial capital, locals and tourists gather for dishes like fresh mint salad, stir-fried banana blossoms, and grilled pork belly with sour dipping sauce. When the restaurant first opened, in 2003, the waitresses, all young Dai women, wore fancy outfits to work. But as the spot became busier, the dress code relaxed to include just a sarong, paired with normal street clothes, and today the owner only pulls out full uniforms for special events. The food is popular enough—and delicious enough—to stand on its own.

Georgia Freedman’s book, Cooking South of the Clouds: Recipes and Stories From China’s Yunnan Province, is out in September.

Georgia Freedman is a freelance journalist and editor based in the Bay Area. Her writing has appeared in the Wall Street Journal, Afar, Martha Stewart Living, Rodale’s Organic Life, Roads and Kingdoms, and other food and travel publications including Saveur magazine, where she was previously the managing editor. She is the author of the upcoming cookbook Cooking South of the Clouds—Recipes and Stories from China’s Yunnan Province (Kyle Books, September 2018).