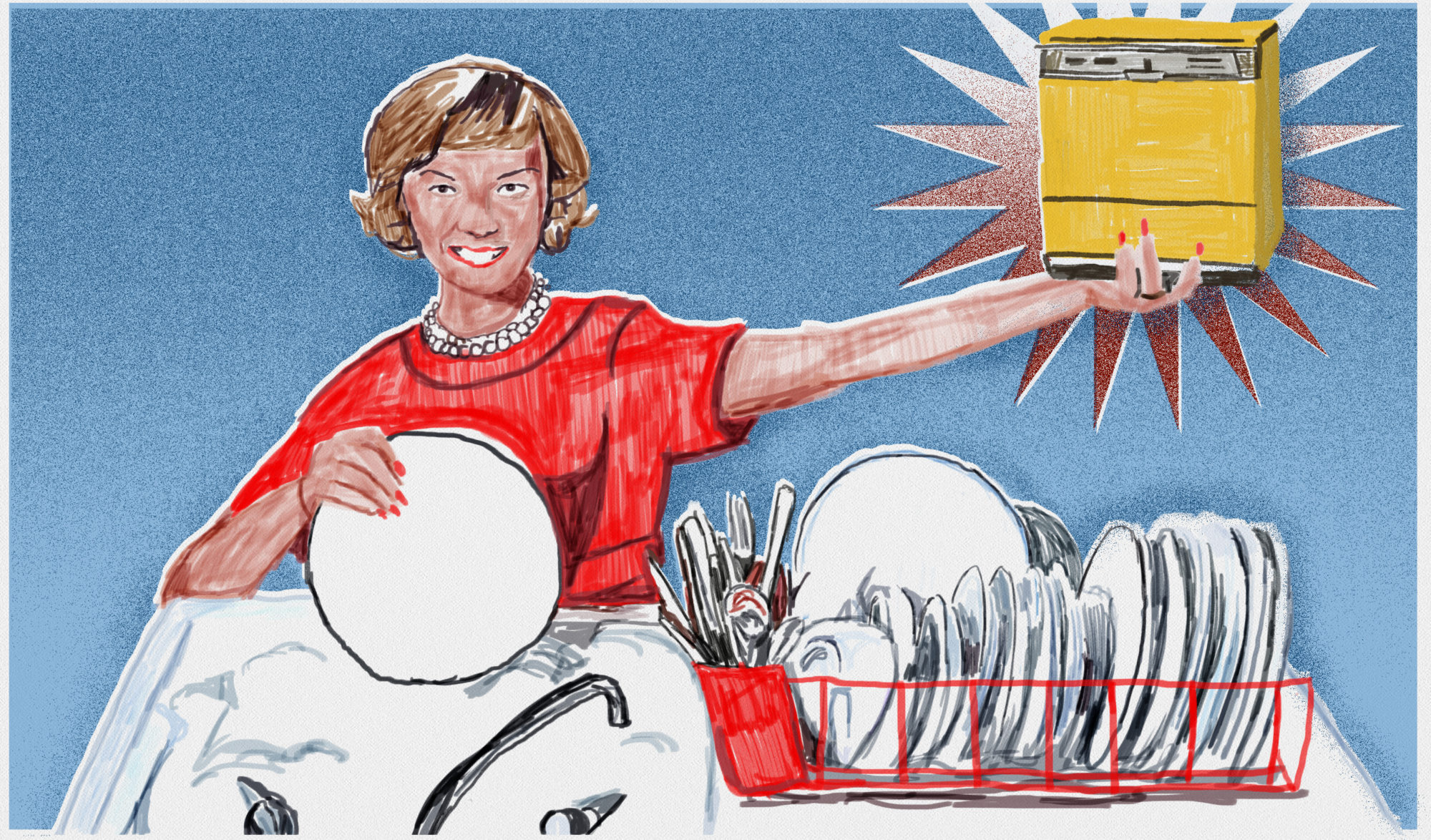 Plenty of people who grow up with dishwashers in American households choose not to use them. The reasons why depend on who you ask.

Growing up, the first thing many people noticed in my family’s kitchen was our dishwasher, or should I say dishwashers. In our kosher home, we couldn’t mix meat and dairy products. That meant we had two sets of dishes—one meat, one dairy—and like many kosher Jews who have the space and money, we had two dishwashers to accommodate that separation.

More than perhaps any other kitchen appliance, dishwashers are a vehicle for expressing different cultural attitudes and relationships. While my family and some kosher observers have two dishwashers, some immigrants refrain from using one at all. And questions swirl like soap about the most effective methods for using a dishwasher. All of this makes the machine prone to debate.

“There’s a mythology about how to properly use a dishwasher,” says Robert Ji-Song Ku, chair and associate professor at Binghamton University’s department of Asian and Asian American studies.

Josephine Garis Cochran received the patent for the first commercially successful dishwasher in 1886, a crucial time for women navigating their place in society. The labor of homemaking weighed on women’s lives, and washing dishes—especially when families were large and convenience foods were rare—took considerable time, according to Virginia Vincenti, professor emeritus of human development and family sciences at the University of Wyoming.

“There was a push by professional women around the turn of the century to lighten the load for homemakers,” says Vincenti, coauthor of Rethinking Home Economics: Women and the History of a Profession. “The push was: How can we reduce the labor and allow for more than just the drudgery work of keeping a family going and have more time for dealing with the human relationships, the child development, the nonphysical aspects and the nonlabor aspects of family life?”

In the 1950s, as dishwashers got smaller and more advanced, they became common in American kitchens. And they did indeed help free women for other pursuits. Today, North America and Western Europe lead globally in dishwasher sales, with the biggest markets being the U.S. and Germany, while use of the appliance is limited elsewhere. Euromonitor International, a market research publication, notes that in many populous countries, people with enough means employ domestic help to do household chores, including hand-washing dishes. India, China, Brazil, Nigeria, Romania, and Thailand are a few examples of places with low penetration rates of dishwashers. According to the U.S. Energy Information Administration, about 80 million homes in the U.S. have dishwashers, so whether you decide to buy or rent your home, there is a good chance there will already be a dishwasher in the kitchen when you move in. But in about 20 percent of these homes, the dishwasher goes unused.

My friend Paul Nam grew up in one of those homes. Nam, who immigrated to the U.S. from South Korea with his family when he was six, first used a dishwasher when he moved to Atlanta after graduating from college. He had grown up in a home with a dishwasher but was mostly accustomed to using it as a drying rack or utensil storage.

“I had a white roommate,” Nam recalls. “He was the first one to use the dishwasher in our place in order to actually wash the dishes.”

Many Americans, especially (but not limited to) immigrant and first-generation ones, choose not to use a dishwasher. Just in my circle, friends and relatives with family history in Iran, El Salvador, Puerto Rico, Cuba, and Taiwan talked about not using a dishwasher when they were growing up.

Nam usually cleans his dishes by hand. It bothers him that dirty dishes sit inside the dishwasher. “Psychologically, there’s this kind of urgency to have things clean as soon as possible,” he says.

Like Nam, Ku immediately brought up a scene in the sitcom Fresh Off the Boat: After kids find out the drying rack in their kitchen is really a dish-cleaning contraption, they confront their Taiwanese-American mother about why the family doesn’t use its dishwasher. Her answer? “Because it’s wasteful. It makes you soft and it’s hard on the dishware. Chinese people respect their nice plates. That’s why they’re called china.”

Ku, who published two books on Asian-American food studies, immigrated from South Korea when he was eight. Though his family never used a dishwasher when he was growing up, his wife now has an ongoing dispute about the machine with her parents, who all live in the same house.

“After each meal, when we all get up to clean up, this Groundhog Day conversation happens between my wife and my in-laws,” Ku says. “My in-laws quickly get up and say, ‘We’ll do the dishes.’ And my wife would say, ‘Oh, let’s just put it in the dishwasher.’ And then they have the back and forth.” His in-laws win the argument about half the time.

Ku’s in-laws give myriad reasons for cleaning the dishes by hand: They want to contribute to the household chores, it’s good exercise, it saves electricity—and hilariously, they don’t want the dishwasher to break from overuse.

But Ku suspects that the dishwasher aversion stems from a mistrust of technology.

“[There’s] the idea that doing things by hand [takes] more care and there’s more affection involved,” he says. “It’s not just Koreans. In reaction to modernity and contemporary life, a lot of people want to turn to an older notion of life where things are done by hand and there is a kind of fetishizing of doing things by hand as opposed to by a machine. And when it comes to the kitchen, many Koreans—I think because of the changing nature of Korean society and also in Korean-American society—they feel that doing things by hand, even washing dishes, is more authentic in some sense and you’re showing more care for things.”

Patrick Bellefleur, a real estate development analyst in Atlanta, didn’t use a dishwasher while  growing up with his Haitian parents and still washes dishes by hand out of habit. But after seeing his friends use the machine at their homes, Bellefleur questioned why his family didn’t.

“My parents, especially coming from Haiti, they never felt the dishwasher actually cleaned the dishes properly enough,” he says. Instead, his family often washed dishes by hand with bleach, especially when they cooked meat. At first, Bellefleur thought it was a family quirk, but he has since realized that a lot of Caribbean islanders do the same.

Bellefleur says his parents view the dishwasher as part of American culture. “Other cultures sort of have a different viewpoint,” he says. “They don’t look at it from a technological standpoint. They look at it [as] Americans are lazy.”

Dishwashers really come down to relationships between people. Ku says the machine is one arena where humans try to figure out their place in the world, whether that’s among a multigenerational household, with roommates, or with a significant other. The machine was invented partially to reduce the kitchen drudgery for women, but some people see it as an easy way out of housework—a task that even today in the U.S. more often falls to women.

Adina Solomon is a freelance journalist based in Atlanta. She writes about a range of topics—everything from food to business to culture to transportation and beyond. Her work has appeared in The Washington Post, U.S. News & World Report, The Atlantic's CityLab and other outlets both in Atlanta and nationally. She lived in France for a spell, where she learned how to make a mean crepe.