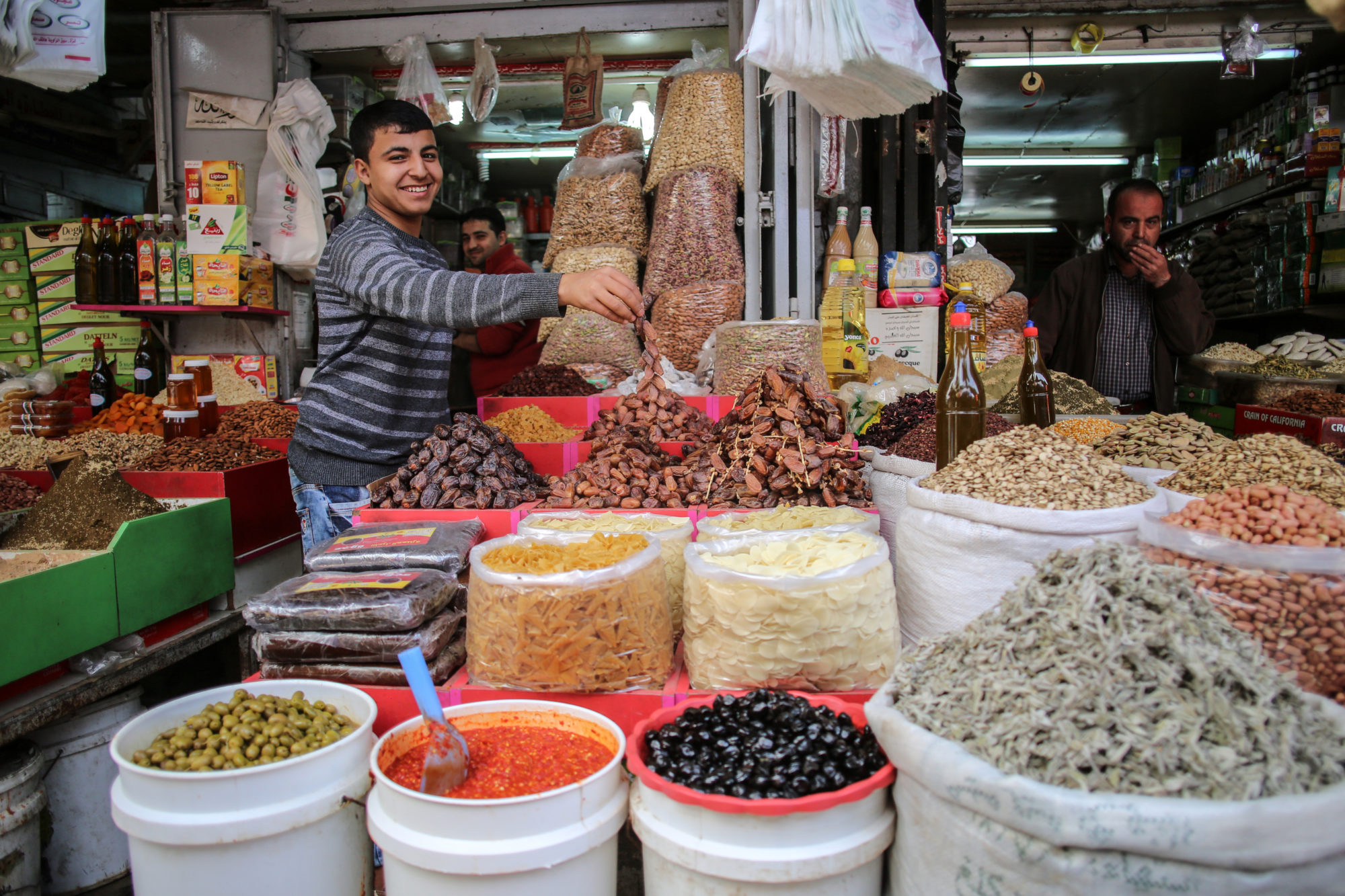 I sat on a stool in Ahmed Masoud’s kitchen, watching him tear a large handful of dill from the tangle of green herbs on his counter and rhythmically roll their delicate green fronds between his palms. “I sniffed my hands the other day,” he said, as the room filled with the sweet scent of anise. “And I realized I smelled like my mum. She taught me to rub dill together with the flats of my palms when I was preparing it. She insisted it made the food taste better.” Ahmed smiled as he brought his right hand to the tip of his nose and inhaled gently.

A thicket of fragrant dill might not be the first image that springs to mind when thinking of the Gaza Strip, a densely populated stretch of land just 40 miles from Tel Aviv. But for many Gazans, dill is the scent of home. In Gazan cuisine, dill is abundant and plentiful, its delicate fresh leaves chopped into salads and stuffed into the cavities of fish and seafood, and its aromatic seeds ground and added by the spoonful to soups and stews. Dill sits alongside hot chiles and spicy garlic to form the bedrock of Gazan cooking, giving it a distinctive flavor that sets it apart from other Palestinian cuisine.

But of course, Gaza is set apart from wider Palestinian life in many other ways, too. For the last 11 years, Palestinians in the Gaza Strip have been living in what United Nations officials have called “the world’s largest open-air prison,” held under siege by the Israeli army, which enforces a blockade of the area, controlling all movement of goods and people. The blockade has affected Gaza’s economy dramatically, and today half of Gaza’s 1.6 million inhabitants are dependent on UN food aid to survive. Desserts and baked goods at a market in Gaza City.

As part of the blockade, Israeli authorities have banned all foreign trade with Gaza and restricted its food supplies. The list of goods allowed into the Strip is so punitive that at times even basic grocery staples, such as pasta, lentils, and coffee, have been denied entry. On top of this, since 2008 Gazans have endured three wars, which have killed thousands of civilians and destroyed homes and vital infrastructure. The lack of materials to maintain or repair what’s left has led to 95 percent of Gaza’s water being unfit for human consumption and crippling electricity shortages, sometimes amounting to just a few hours each day.

But amidst these challenges, the people of Gaza continue to survive, they continue to cook, to eat, to exist. While dill may be the outlier, the food in Gaza encompasses many of the traditional Palestinian staples: hummus and falafel, molded rice-and-vegetable pilafs called maqloubeh, stuffed courgettes and eggplants known as mashi. The liberal addition of local green and red chiles makes Gazan versions of these dishes hotter than those traditionally enjoyed by other Palestinian communities. Indeed, Gazans fully embrace spicy food, and most meals are accompanied by shatta, a fiery local hot sauce made from crushed red peppers, or dagga, a smashed salad made from tomatoes, chiles, and dill.

Gazan dishes also tend to veer toward the sharper end of the spectrum, using pomegranate molasses, sumac, lemons, and sour plums to add a requisite tartness. The local delicacy of rumminayya brings these elements together in a hearty lentil-and-eggplant stew that is simmered with tangy pomegranate molasses and sumac and served with warm flatbreads or spooned over rice.

Wild foraged greens, such as dandelion, jew’s mallow, and local varieties of wild arugula and chard, are commonplace in Gazan cookery, their bitter leaves stir-fried with sweet caramelized onions or smothered with roasted red tahini. Gazan food is also known for its adaptability, with lentils replacing meat in many traditional dishes as the blockade has worn on, and the incorporation of new ingredients, such as avocados, which are not native to the region (they were planted by Israeli settlers) but have since been embraced by locals, who use them to make a kind of “Gazan guac,” with sumac, creamy labneh, and sesame seeds mixed through the mashed fruit alongside copious amounts of green chile and lemon juice. It was this story of how the blockade has changed Gaza’s food habits that I was most interested in when researching my new book, Zaitoun: Recipes From the Palestinian Kitchen. Due to the siege, I couldn’t visit to Gaza in person, so I traveled there through the kitchens of Gazans in the diaspora, or by talking to people via Skype. Ahmed was one of my most charming hosts, a playwright and novelist who was born in the Jabalia camp in the north of the Gaza Strip and now lives in London. As we prepared a spicy prawn-and-tomato stew, known as zibdiyit gambari, Ahmed described the food traditions he grew up with, coming from a family of fishermen. “Fish is everything in Gaza,” he said, dropping plump raw prawns into a cast-iron pot. “It was our main food source, especially sardines. There were so many when I was growing up. We’d barbecue them on the beach, make them into kibbeh, bake them, fry them…. They were cheap and plentiful.”

As half of Gaza Strip borders the Mediterranean Sea, it shouldn’t be a surprise to hear that seafood and fish have traditionally been a prominent feature of Gazan cuisine. “But Gaza’s fishing industry is struggling,” Ahmed tells me. “Today, fishermen are only allowed to fish in a small area close to the shore due to restrictions placed on them. If they go beyond the permitted fishing zone, they can be shot at by Israeli soldiers.”

According to the 1993 Oslo peace accords, Israel is supposed to allow Gazans to fish up to 20 nautical miles away from shore, but since the blockade has been in force, Israeli soldiers have restricted this to nine, six, or sometimes even three miles from shore. This has decimated Gaza’s fishing industry because the best fish can only be found farther out from shore—the water closer to shore is contaminated with sewage due to its war-damaged infrastructure. As Gazan blogger Omar Gharaib tells me, “the fish people collect these days is questionable in terms of food safety. I avoid it.” Staples of the Palestinian table include hummus and falafel, molded rice-and-vegetable pilafs called maqloubeh. And, of course, olives.

Omar spoke to me via Skype from Gaza City. Like many others around the world, spending time in the kitchen is how he relaxes, and he finds the meditative quality of cooking a vehicle through which he can escape the challenges of everyday life in Gaza. But even in the kitchen, Omar can’t escape his concerns. “There has been a spike in cancer rates here,” he told me. “Our land is filled with the remnants of tons of artillery and missiles and bombs…. How do you think that is affecting the soil?”

In 2009, Israel used white phosphorus against Gazans during Operation Cast Lead, and Omar fears the ongoing damage of these chemical weapons is affecting Gaza’s produce. “No matter how much you clean the vegetables, you always wonder, is this really clean? Or is this carrot going to give me cancer?”

Despite this, Omar finds resilience in the everyday moments of life, and this is the message he promotes on his social media feeds, which often focus on stories of what he is eating.  “People in Gaza really love life,” he told me. “We don’t take life for granted. If there is darkness, we manage to find some light; if there is ugliness, we manage to find some beauty; if there is despair, we find or create some hope.” As half of Gaza Strip borders the Mediterranean Sea, seafood has traditionally been a prominent feature of Gazan cuisine.

“This is the image of Gaza I would like people to know,” Omar continued. “It’s not just a place of death and destruction and Hamas and Fatah and Israel and war and borders; we are not only that. We are 2 million people, just humans like everyone else in the world, waking up to life every day and looking for the chance to be happy.”

The dining table may not be the most obvious place to search for hope in a conflict zone, but as I cooked my way through Palestinian kitchens, it was certainly the sentiment that I was left with the most.

Avocados grow throughout the Gaza Strip and in this recipe they are paired with garlic and green chilli for a spicy side dish. Use the ripest avocados you can find here, as those will give the creamiest results. When Ahmed made this for me, he called it the “Gazan guac,” and—like that South American namesake—it makes an excellent dip.

The Gazan playwright and author Ahmed Masoud introduced me to this dish, which embodies the fiery, garlicky and dill-infused cooking of the Gaza Strip. Traditionally baked in a clay pot, I’ve adapted this recipe for the hob. As varieties of chilli can differ in strength, add them in stages until the sauce has the right level of heat for you.

This sharp and tangy stew is one of the signature dishes of Gaza City and is another recipe adapted from Laila El-Haddad and Maggie Schmitt’s excellent book The Gaza Kitchen. Traditionally made with dill seeds and the roasted red tahini of the city, my version uses caraway seeds and toasted sesame oil, both more readily available in Western supermarkets. Of course, if you happen to come across the former ingredients, don’t hesitate to use them for a more authentic version. In Gaza this is often served at room temperature with warm bread. The accompaniments are up to you; I like it with steamed rice or—if I need something a little more comforting—a generous portion of creamy mashed potato. This tastes even better the next day, so is a great make-ahead dish.

Yasmin Khan is a food and travel writer, broadcaster and author of the best-selling and critically acclaimed travel cookbooks The Saffron Tales (Bloomsbury 2016), Zaitoun (Norton 2019), and Ripe Figs (2021).