Get a free recipe
Subscribe
Have iPhone, Will Cook: How Digital Cookbooks Are Finally Breaking Through
By: Matt Berical Illustration: Natalie Nelson 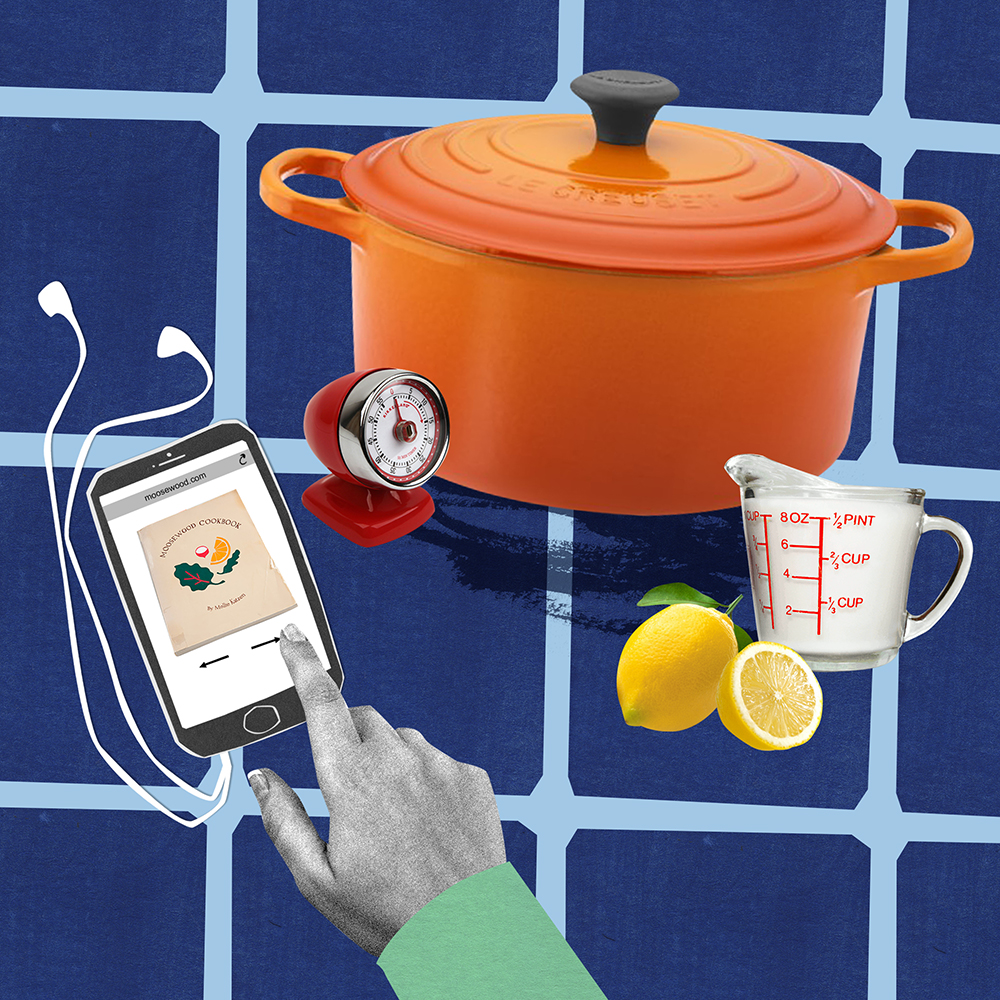 New York City UX designer Kim Howard calls them stop-skippers. They belong to a special category of books in which she gets lost and ends up missing her intended subway destination. Her last three? The Night Circus, A Gentleman in Moscow, and The Elements of Pizza. “Night Circus was beautiful and I’m a sucker for magic; Gentleman was recommended by a friend and extremely engaging,” explains Howard. And as for The Elements of Pizza? “That was about, well, pizza.”

The idea of Howard cracking open Ken Forkish’s massive 256-page hardcover pizza bible on the 2 train—as though it were the latest beach read—probably seems a little weird. And it might be, except for the fact that like many modern-day book obsessives, Howard pulled this tribute to sauce and dough from her digital bookshelf. The title was stored on her iPad. For a passionate home cook with a fondness for all forms of pizza, downloading and swiping through recipes and stories is no different than reading tales of big top magicians and imprisoned Bolsheviks.

Howard is far from alone in her casual approach to cookbook reading. As chefs maintain prized real estate within the cultural ether, and as modern cookbooks continue to link compelling narratives with recipes and bold photography, interested readers are turning to digital versions of cookbooks on tablets, smartphones, and e-readers. Some, like Howard, treat them as though they were novels; others search for spaghetti puttanesca recipes between games of Candy Crush; still others prop tablets up on countertops and browse through steps when preparing a meal.

While websites and apps like Allrecipes, Epicurious, and New York Times Cooking have a strong position in the competitive online home-cooking market, digital cookbooks are finding a passionate, and growing, audience themselves.

There are more recipes available today than at any other time in history, and we’re hit with an unending salvo of chili dog hacks and Asian noodle bowls almost daily. With millions of home chefs being force-fed #mealinspiration on Facebook, Instagram, and other social feeds, there’s a growing need for the narrative arc and inherent authority found in well-produced cookbooks.

Portable, Searchable
For many, the true allure of digital cookbooks comes down to one thing: convenience.

Take Mona Nomura, 34. She’s the head of digital marketing for McDonald’s Japan and spends a lot of time on her phone during her daily commute in Tokyo. While she owns a Kindle, she credits the iPhone 6 Plus with sparking her weekly reading (“Vertical scrolling, not page turning, FTW!”). “It kicked up my reading habits from zero to one book a week,” she says.

Her books of choice range from general fiction (“Any bestseller, YA or nonfiction”) to the culinary arts, particularly any cookbooks by Ruth Reichl, Laurie Colwin, or Harold McGee (“They can write. Boy, can they write,” she says).

Nomura says she honestly prefers physical cookbooks to downloads. But in addition to her commuting time, space constraints and society fueled her e-habit: For one thing, English-language cookbooks can’t be casually purchased in Tokyo; for another, she lives in a small space with little room for fat books of recipes.

When it comes time to prepare food, Nomura looks to her downloaded e-cookbooks and the Japanese recipe site Cookpad, but she doesn’t like to prepare meals with a tablet in front of her. She’s against a growing trend: According to ThinkGoogle, 59 percent of 25- to 34-year-olds cook with either a smartphone or a tablet handy. The results were based on a 2015 survey that also showed millennials (defined as those in the 25- to 34-year-old demographic) prefer “the culinary process as much as the finished dish” and want to “experiment with new recipes and learn new skills.”

Matt Gray, 40, a professor living in Salem, Massachusetts, regularly downloads and cooks using digital cookbooks. “My first digital cookbook was The 4-Hour Chef by nonchef Tim Ferriss,” says Gray, an amateur chef who became a regular downloader because of one thing: searchability.

“I always end up with chicken or beef in the fridge that I need to use in the next two days but don’t want to cook something I’ve cooked before,” says Gray. “And this is especially true when I have an ingredient I use very rarely, like beef or pork.” Searching allows him to be more adventurous in his meal-making, and while he adores Thomas Keller, he gravitates to less tool-intensive cookbooks, like Yotam Ottolenghi’s vegetable-centric Plenty. “It’s totally doable and mind-expanding,” he says.

For many, the true allure of digital cookbooks comes down to one thing: convenience.

So are e-cookbooks a major trend? Hardly. Apps and social feeds dominate the market share. But there is an interesting group of people for whom e-cookbooks seem to hold the most appeal: the expansive, urban-residing millennials interested in meal-making who treat cooking as another life skill to master. They’re as likely to download a few of the best-reviewed books as they are to look up a recipe in the New York Times cooking app.

But the fact that some people enjoy digital versions of books doesn’t mean it’s an either/or scenario between physical or e-form. There’s room for both. Howard, for instance, says if there’s a book by a chef she really admires and wants to experience then she’ll purchase it in both formats. “I like having both,” she says.

And that word, “experience,” is important. “When I see a new cookbook, it’s rare that I find one that isn’t really well designed,” says Mark Rotella, a senior editor at Publishers Weekly who focuses on cookbooks. “And before you could just put recipes in a book and not care too much about design — it was more utilitarian. But now? Now it’s a whole experience from cover to cover.”

Although he doesn’t have any hard numbers, Rotella says there are benefits of both mediums.

“People use different cookbooks for different reasons,” he says. “People like to flip through books and get ideas rather than having an idea in mind and looking for a recipe, whereas with digital versions you see people searching for a specific recipe or a specific ingredient they have on hand.”

Will there still be room for both on the shelf?