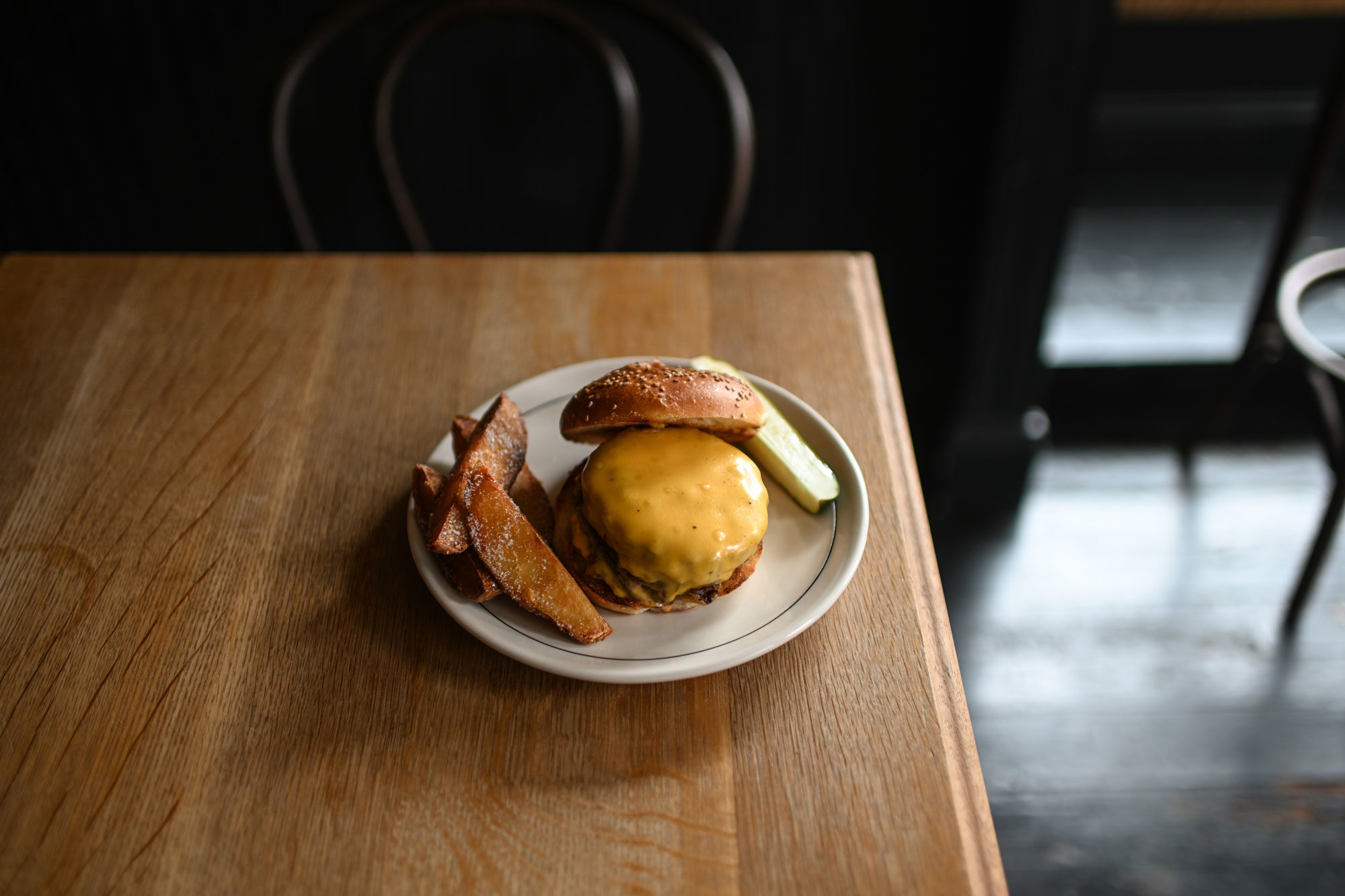 Billy Durney didn’t exactly set out to create an instant classic burger, but he just may have. All it took was a little R&D and a connection with New York City’s iconic steak houses. While his 21st-century smoke joint, Hometown Bar-B-Que, sought to filter Brooklyn through the diaspora of American barbecue, his sophomore effort, Red Hook Tavern, is intended to evoke what Durney describes as a “simpler, easier, more beautiful time”—the Red Hook of his grandmother and great-grandmother, who emigrated there from Norway and Ireland, respectively, during the 1920s and ’30s.

The Tavern’s exposed brick walls, custom white oak bar, and brass gaslight lamps are an ode to an era where news traveled in days, not moments, and the local tavern was a center of public life. According to Durney, the menu is meant to be as evocative as the room, with one tavern staple as a centerpiece: the cheeseburger. And it couldn’t just be any burger, but one that felt as iconic as its inspiration. “It was an easy choice,” Durney says. “The one that always caught my heart, being a kid from Brooklyn, [is] the Peter Luger Steak House burger.”

The Luger burger is the stuff of legend—a plump patty shaped from the trimmings of the Brooklyn steak house’s Prime-grade porterhouse steaks, which are dry aged in the restaurant’s basement and cooked in the same broilers. To Durney, the lunch-only offering epitomizes everything that makes a classic New York City burger great. While other pricey burgers define themselves by rococo ingredients, Luger’s burger acts as a showcase for all of the careful butchering and aging done by the steak house. Yet aside from the quality of the beef, the Luger burger shares more in common structurally with the Spartan tavern-style burgers of J.G. Melon, P.J. Clarke’s, and Corner Bistro, all of which Durney name-checked as inspirational. The bun, of course, is a matter of careful consideration.

When Durney set out to develop his burger, he pleaded with David Berson, a fourth-generation owner of Peter Luger and a friend of Durney’s, to reveal the identity of the baker who produces the crusty, Italian-style bun that the Williamsburg steak house uses. Berson eventually agreed, but on the condition that Durney would keep its provenance a secret. “It’s the only secret I have,” says Durney, who is otherwise eager to share his recipe. The bun is ideal in his estimation because “it is the right size” and had the structural integrity to perfectly contain the juicy patty. In order to replicate the dry-aged scraps of prime porterhouse that gets chopped into the Luger burger, Durney partnered with butcher Pat LaFrieda to craft the patty that best expressed his vision—testing different aging periods and cuts, like short rib and brisket. After six months, he and LaFrieda had come up with eight blends, which Durney eventually whittled down to one.

“I don’t believe in the one-flip concept. I am constantly moving the patty.”

“The two things I demanded in this burger were really high-end dry-aged beef and the right fat percentage,” says Durney. To this end, he went with a blend that is equal measures of New York strip for the dry-aged component and “bang-for-your-buck ground chuck” for the mouthfeel. The patty gains its succulence from a generous 25 percent fat to 75 percent lean ratio, and like the one at Luger’s, the patty weighs eight ounces and measures an inch thick.

While Luger sears its burgers under a commercial broiler, Durney opts to cook his on a griddle, but he advises that the home cook can substitute a cast-iron skillet or other metal pan. (He cautions against nonstick materials, as they prevent a true fond from forming, and the juices tend to steam the meat.) Durney aggressively seasons the patties with kosher salt and black pepper immediately before cooking. “Some people say, ‘Stay away from the black pepper’ because they worry about it burning. I couldn’t disagree more—I built my whole career on black pepper,” he says, in reference to the rub on his smoked meats at Hometown. He then cooks the patty over high heat, flipping it constantly during the cooking process. “I don’t believe in the one-flip concept. I am constantly moving the patty,” says Durney, who insists that it ensures an even char on the exterior and what he refers to as “wire-to-wire” doneness internally.

On his cheese selection, he is unequivocally in the Luger camp: “I only use yellow American cheese, either Land O’Lakes or Hotel Bar brands,” he says, listing the two brands for their superior melting properties. To achieve the formfitting melt, the patty is covered with two slices of cheese and capped with a pan lid toward the very end of cooking—when the patty reaches his desired internal temperature of 130°F, for the preferred medium-rare. On the Tavern’s prodigiously hot griddle, this takes no more than six minutes. Ideally, the cheese will cascade evenly down the entire patty, obscuring the meat completely and even charring slightly as it reaches the griddle surface. “I want people to see the ‘girdling,’” says Durney, referring to the crunchy browned ring that often forms when this happens.

Durney is also a believer in resting the burger for three minutes after cooking to allow the juices to redistribute within the patty. Once rested, the burger is placed atop a thin sliver of white onion and then atop the heel of the bun, which helps to protect it from wilting under the duress of beef fat. The final touch is leaning the crown of the bun between patty and plate, revealing the gleaming molten mass of cheese and leaving the final assembly to the diner.

Once crowned, the resulting burger is the model of tidy efficiency—the type of burger you would gladly pay for on Tuesday, just to eat today.

Nick Solares is a food writer, photographer, and host of Meat Life, a show about meat.