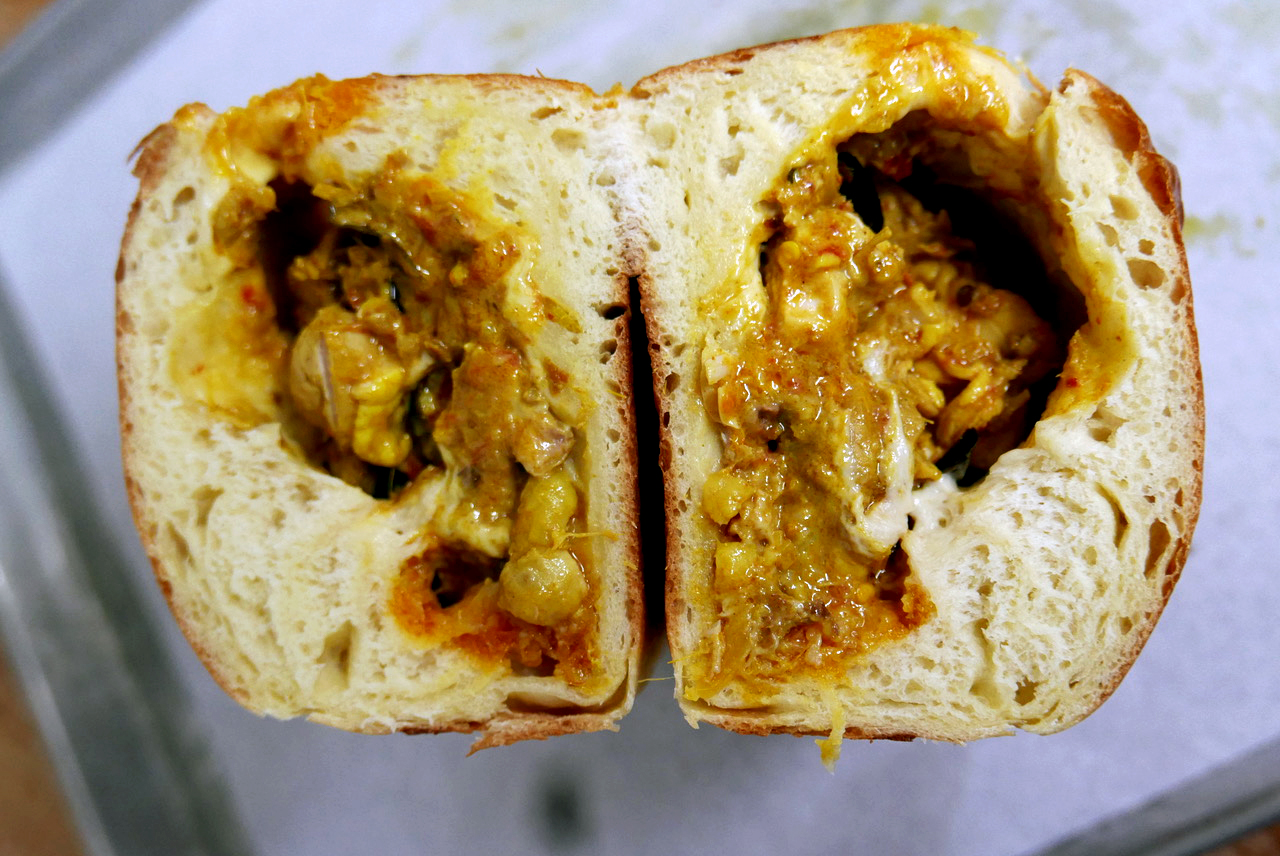 A meal in Malaysia over a decade ago sends one writer down a very fragrant rabbit hole. Can he re-create a long-lost dish in a New York City kitchen, or will it be locked away in the memory box forever?

When you eat adventurously, around the world and across the decades, you will eventually find yourself haunted. The wildflower scent of a backyard wine you sipped in Galicia, that supple hummus in the Old City of Jerusalem, the ribeye you accidently grilled to unsurpassable perfection on an East Village rooftop one Fourth of July—all lodge in your memory, endlessly rippling through your senses, taunting you with the fact of their now-unattainable delights. These were once-in-a-lifetime experiences. Never again will they be yours, except as echoes of the past.

In March of 2006, I went on a road trip through Malaysia, driving from Johor, on the border with Singapore, up through Melaka and on to Penang, an island said to have the country’s best food, and Ipoh, a city whose cuisine bears a heavy Cantonese influence, with dim sum a popular breakfast.

It was outside Ipoh, in the town of Kampar, at a restaurant called Yau Kee, that I encountered a dish I’ve been obsessing over ever since: curry bread. Really, it’s simple. You make a pan of classic Malaysian curry chicken—perfumed with powdered spices, rich with coconut milk, tinged red with chiles—and bake it inside a whole loaf of bread (the soft, challah-like, slightly sweet bread found throughout Asia). Then, to serve, you remove the top of the bread, exposing the curry, and eat the chicken while dipping chunks of lightly sweet dough into the flavorful sauce. It’s comfort food, squared. No—cubed! Because the curry bread is so large, it needs to be shared with friends, all of you sharing in the dipping delight of spice and meat and bread and creamy coconut.

I don’t remember who I ate there with, but I do remember loving the genius of the dish (and that we could barely finish one loaf). Fresh-baked bread and steamy-hot curry are two of the best smells in the world, and here the two were served all in one, yet still separate—a Malaysian McDLT in a way.

In the 11 years since then, I’ve often wondered why curry bread hasn’t become more popular in the States, especially as large-format dishes became popular in restaurants across the land (hulking steaks; salt and pepper lobster for four at Momofuku). But even in Malaysia, it’s not hugely popular. Yau Kee has a competitor down the street, Kam Ling. In Seremban, a city south of Kuala Lumpur, Lucky King Bun fills its slightly smaller buns with curry chicken, curry pork ribs, and Chinese-style braised pork belly. And while thousands of bakeries sell personal-size buns with a bit of curried meat inside, that’s just not the same as the communal experience of breaking into a big old loaf and finding a delicious curry inside. Yes, it’s a little gimmicky, but it’s a damn tasty gimmick. Finally, I decided to take matters into my own hands. Sort of. Afraid I would make a mistake, and ruin my memory of this delight, I enlisted two New York City chefs to help: Simpson Wong, the Malaysian chef behind Chomp Chomp, in the West Village, and Dianna Daoheung, the chief baker at Black Seed Bagels. Wong would show me how to make the curry, and Daoheung would figure out a way to envelop Wong’s creation.

When I first got in touch with Wong, he asked me a question that let me know we were on the right track: “We are not going to use the awful parchment in the dough, are we?”

Wong was referring to the inelegant parchment paper that Yau Kee wraps its curry in, around which it then wraps the bread dough. While ugly and an Instagram buzzkill, it’s functional, preventing the soupy curry from soaking into the surrounding bread. (Still, it’s better than some places that use aluminum foil—yeesh.) If Wong could figure a way around this, we’d really have something special.

His solution, as I discovered when I visited him at Chomp Chomp one lunchtime, was to make a slightly drier curry, rather than a “soupy” one like his grandmother used to make. Into a pot of oil (two parts canola, three parts coconut), he methodically sautéed minced aromatics—shallots, galangal, turmeric root, ginger, garlic, lemongrass—before adding curry powder, chile paste, and a handful of curry leaves, all the while commenting on how he’d never made such a small batch in years! When the aromas were at their peak, he added a three-and-a-half-pound chicken, chopped up into bite-size chunks—the collagen from the bones would help the curry thicken—and then the coconut milk. A mere 10 minutes of simmering, and it was done. As we retreated to the bar with small bowls of the curry and a fresh baguette to sample his work, Wong told me he’d grown up not far from Kampar. “My father used to own a lumber yard,” he said. “And so we would go to Kampar to sell the timber to a sawmill. And I was the youngest in the family, so I was keeping him company so he doesn’t fall asleep on the wheels.”

Had he been to Yau Kee or Kam Ling as a child? “Well, the thing is we don’t really eat a lot of this kind of thing,” he said. “Because it’s very expensive.”

Wong’s curry was just as I’d wanted it to be, lush and spicy, with a hint of sweetness. It made about two quarts, which we packed in plastic containers and set aside to refrigerate. The fats and collagen would, we hoped, coagulate enough that it would be ready for the next stage.

Over in the East Village, Daoheung was in the Black Seed Bagels basement mixing up batches of dough. Daoheung, who grew up in Florida but whose family comes from Laos and Thailand, had tasted Thai curry buns before—smaller, with more rice flour in the dough—but this full-size bread was new to her, and she said she was “super excited” for the experiment.

The dough, she said, would be her standard challah—eggier and more gluten-heavy than most. The extra gluten, she figured, would help with “the liquid factor”—i.e., contain the curry without being dissolved by it. (Wong’s curry had definitely solidified enough for us to scoop with a spoon.) Daoheung had enough dough for two loaves; one would be freeform, a bit like what I’d eaten in Malaysia, while the other would be more structured, fitting into a Pullman loaf pan. (Each would contain about a pint of curry chicken.) This being challah, of course, both would be adorned with complicated traditional braiding.

“I always say I’m, like, probably the most Asian Jew—or the most Jewish Asian girl—ever!” Daoheung said, laughing. Into the ovens the breads went, and out they came a short while later. The warm scent—yeast and eggs and spices and coconut—took me back to that March day in Malaysia, 11 years ago. Daoheung and I opened the freeform loaf first: Inside, the curry had liquefied, and while it hadn’t leaked through, it had prevented some of the dough from cooking properly. The smaller Pullman loaf, however, was baked just right throughout. In fact, the dough in this shape could probably even handle a slightly soupier curry. And given how quickly and easily Daoheung (and Wong) had put this together, I could easily imagine doing the same at home, either to use up leftovers or to create a special gift for a dinner party or potluck, maybe even for Shabbat. It’s kosher, after all!

As I nibbled bread and sauce and chicken, I was utterly content. This was good! I was also a little confused, because now, for the first time in more than a decade, I couldn’t really remember the flavors and textures of the curry bread that had launched this quest. Was that curry spicier? Was the bread sweeter? Had we re-created Yau Kee’s recipe or invented our own?

Those questions would not, I knew, haunt me as the sense memory had. Because now we have this recipe—the tastiest exorcism imaginable. 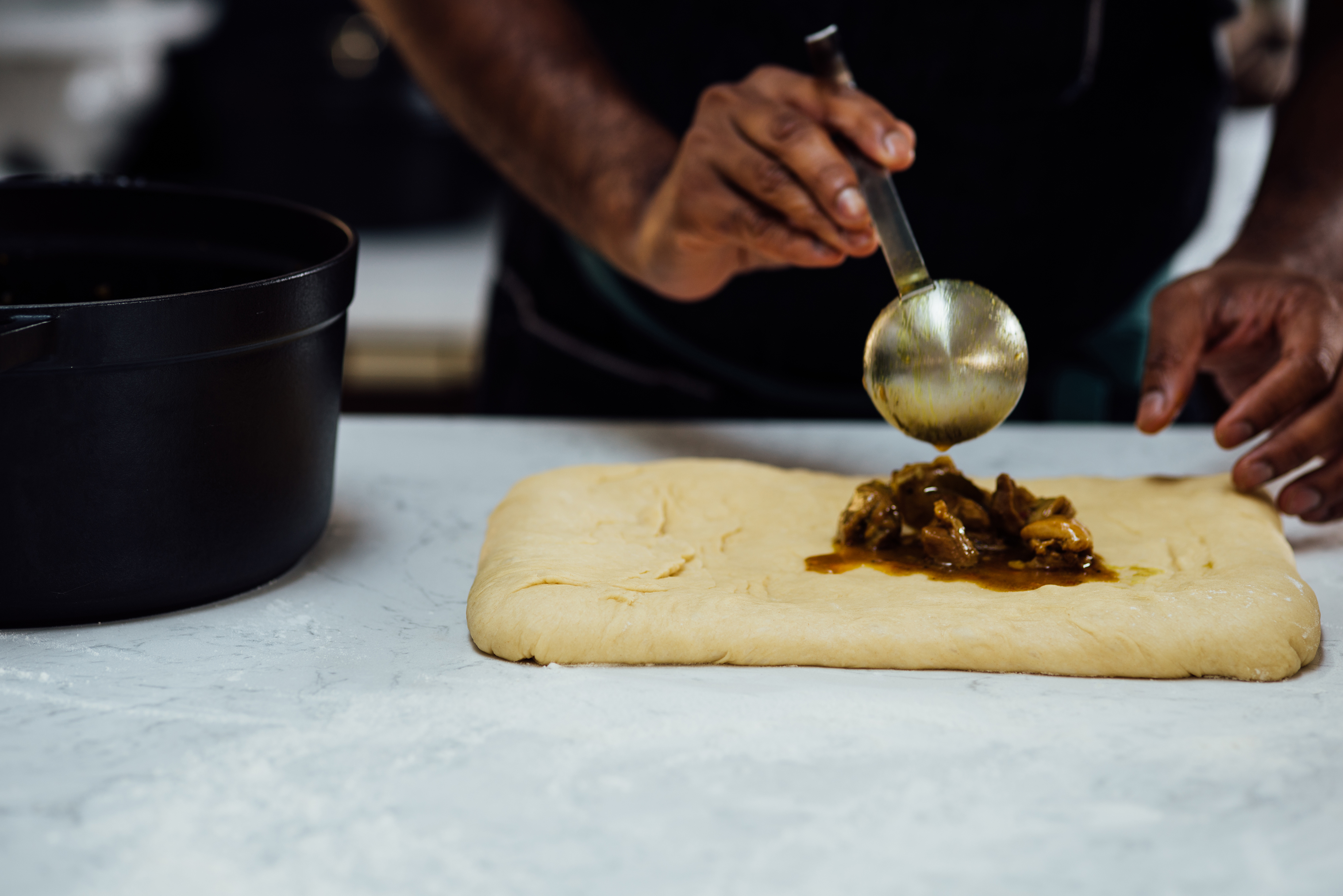 With the help of two Southeast Asian chefs, a distant memory in Malaysia comes to life. The freshly baked bread and fragrant curry come together beautifully, and is best shared with a large group.