Get a free recipe
Subscribe
To Cover India in a Single Cookbook? Mission Possible.
By: Priya Krishna 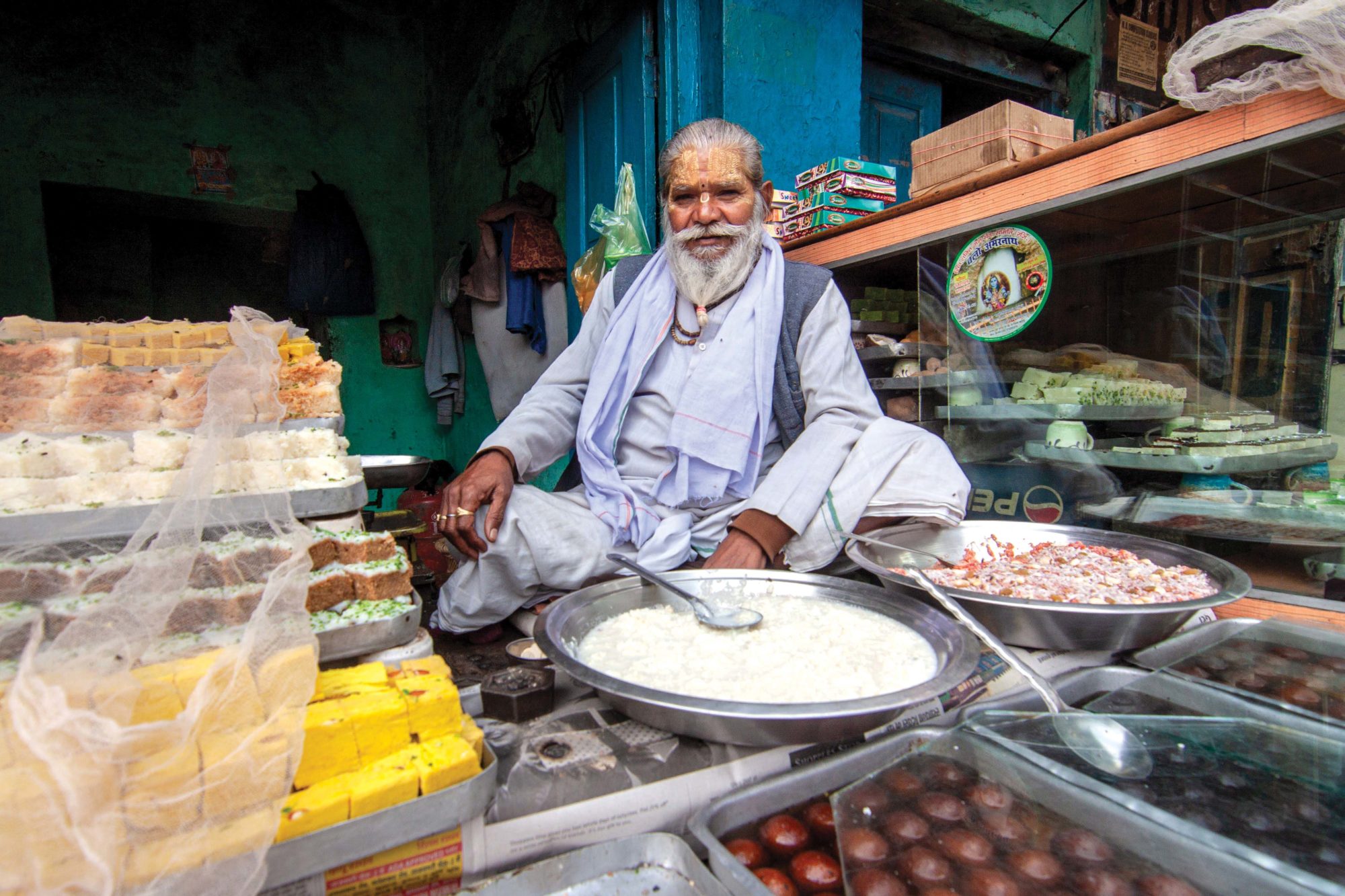 How thousands of miles traveled, and the help of wedding caterers, shaped Tiffin into an extraordinary work.

To ask an Indian from the state of Uttar Pradesh to fully explain the cuisine of Tamil Nadu is like querying an Alabaman about the origins of the lobster roll. Which is to say, Indian cuisine is heavily segmented across geographical lines—some 1.2 million square miles—and many people only really know about the food of where they’re from.

That’s what makes Tiffin—a new cookbook by Vogue India food editor Sonal Ved that tackles the monumental endeavor of covering every region (and state) of India—so impressive. It’s an ambitious volume, divided up by the North, Central, West, South, East, and Northeast regions (then subdivided by state), with 500 recipes, plus essays and photo collections for each part of the country.

Tiffin is not the first cookbook that has attempted to cover all of India. There’s The Complete Indian Regional Cookbook by Mridula Baljekar, and India by Pushpesh Pant, to name a couple. But Ved insists that while the other books take a broader, more regional approach, they miss out on the specialties of specific states. Hers is more representative: There’s at least one recipe for every single state—a masala omelet burger, called egg banjo, from Madhya Pradesh, and ameijoas com coco, clams cooked in chiles and coconut, native to Goa. It’s a more nuanced representation of Indian cooking, she says.

Ripe and unripe bananas in Kumily, a town at the border of Kerala and Tamil Nadu

When Ved, 31, who has been writing about food for over 10 years, signed the book deal in 2017, she had visited about “75 percent of the regions” in India, she says. She was born and raised in Mumbai, with both of her parents originally from Gujarat, in the West. At home, she ate a mixture of vegetable-centric Gujarati food prepared by her mom, and hearty Rajasthani food from her family’s cook—blending tamata bateta nu shaak, a spicy, slightly tangy tomato-and-potato soup, with gatte ki subji, a thick stew filled with dumplings made of gram flour. She traveled often growing up, but she still felt, going into the cookbook, that there were big gaps in her culinary knowledge.

The initial challenge: How to decide which dishes truly define an area? What is to Maharashtra or Himachal Pradesh what bagels are to New York, or barbecue to Texas? Ved knew one thing—she’d avoid restaurants. “To be honest, you really struggle to find regional food in restaurants,” she says. “Restaurants have sandwiches, pasta, pizza, dosa, naan, and dal,” she says, and they lean heavily into Western fare, or dishes that have become Indian-food clichés. Instead, her idea of region-defining dishes was “things that people make in the homes.”

She also wanted the recipes to feel streamlined and doable to people outside of India. “They are not written in a romantic way, like Nigella or Jamie Oliver would write it, like ‘Pour a glug of olive oil,’” she says. “I had to keep the technique very similar—and specific—across recipes in a way that a beginner in Indian cuisine can do this easily.”

Ved first traveled to the places where she hadn’t spent a lot of time—like Sikkim, a Himalayan state in the Northeast, and the forest-coated Chhattisgarh in Central India—to see what ingredients were available and talk to local farmers and home cooks. The information gathered on her travels informed the essays at the beginning of each section, which dive heavily into not just the flavors and ingredients of a region, but agricultural, social, and economic circumstances that created those particular culinary cultures, like how the food eaten in the city of Gwalior, despite being in Central India, has influences from Maharashtran and Nepalese cuisine because the area was once ruled by families from those territories.

To ask an Indian from the state of Uttar Pradesh to fully explain the cuisine of Tamil Nadu is like querying an Alabaman about the origins of the lobster roll.

For the more basic, building-block recipes—like egg masala and lamb biryani—her publishing company, Roli Books, allowed her to tap into recipes from the Indian cookbooks in its collection, like Kerala Kitchen and Annapurni: Heritage Cuisine From Tamil Nadu.

But the bulk of the recipes came from an unlikely source: wedding caterers. “They have those crowd-pleasing dishes,” Ved says—the classic foods that are most widely consumed in each state, like Punjabi bhindi masala, or spiced okra, and a fried bread from Madhya Pradesh called bedmi puri. The caterers also had all their recipes written down.

To fill in the rest, she reached out to relatives and friends’ mothers. Unlike the U.S., India doesn’t have troves of food blogs and cooking websites—culinary traditions are often spoken, and not always codified. A lot of Ved’s time was spent messaging back and forth with people, trying to understand the nuances between, say, a Bihari chicken kebab and a Lucknow chicken kebab. (The Bihari kebab uses a paste of fried onion in the marinade.)

Certain culinary traditions surprised her. She knew that turmeric was used widely in Indian cooking but didn’t know that in Maharashtra, some dishes are cooked in the leaves of turmeric to lend the root’s earthy flavor, as in eradye, a rice and coconut dessert. Or that in Sindhi cuisine, there is lots of dried pasta included in dishes because of traders who brought it from abroad. She included a dish called Macrolyunpatata, made with macaroni, tomatoes, and potatoes.

Ved predicts that pasta will soon be as mainstream in India as the tomato — an ingredient that was once foreign but is now a central part of many local cuisines. “What is Indian, after all?” she says with a chuckle.

Ved wants Tiffin to convey that while there are similarities across Indian cooking (like the universal tendency to finish everything with cilantro), the country’s various cuisines are more disparate than people realize.

And those disparities go beyond small variations, she asserts. “It is drastically different, both the ingredients and the style of eating.” For example, Bengali meals are served course by course and often include fish, while Gujarati cuisine tends to eschew both meat and seafood, and the food is served all together.

Even in the South, where the cuisines of Karnataka and Kerala both use common ingredients like coconuts, banana, and jaggery, “the food may look similar from afar,” Ved says. “Still, the flavors are somehow so different.”

But, she adds, “That’s the beauty of Indian cuisine.”

Dried pasta may not be the first ingredient you associate with Indian cooking, but in Sindhi cuisine, pasta was brought in from abroad via traders years ago, and has now become a commonplace ingredient. Here, macaroni is cooked in a tomato sauce spiked with ginger, garlic, cumin, and potatoes, yielding something resembling a pasta stew.

There are chicken kebabs to be found in countless regional cuisines of India. But what sets apart a Bihari kebab is the fried onion paste used in the marinade — it provides an addictively smoky sweetness to the meat. These kebabs are great on their own, but even better wrapped up in a paratha.