Get a free recipe
Subscribe
Coq au Vin at a Crossroads
By: Jake Cohen 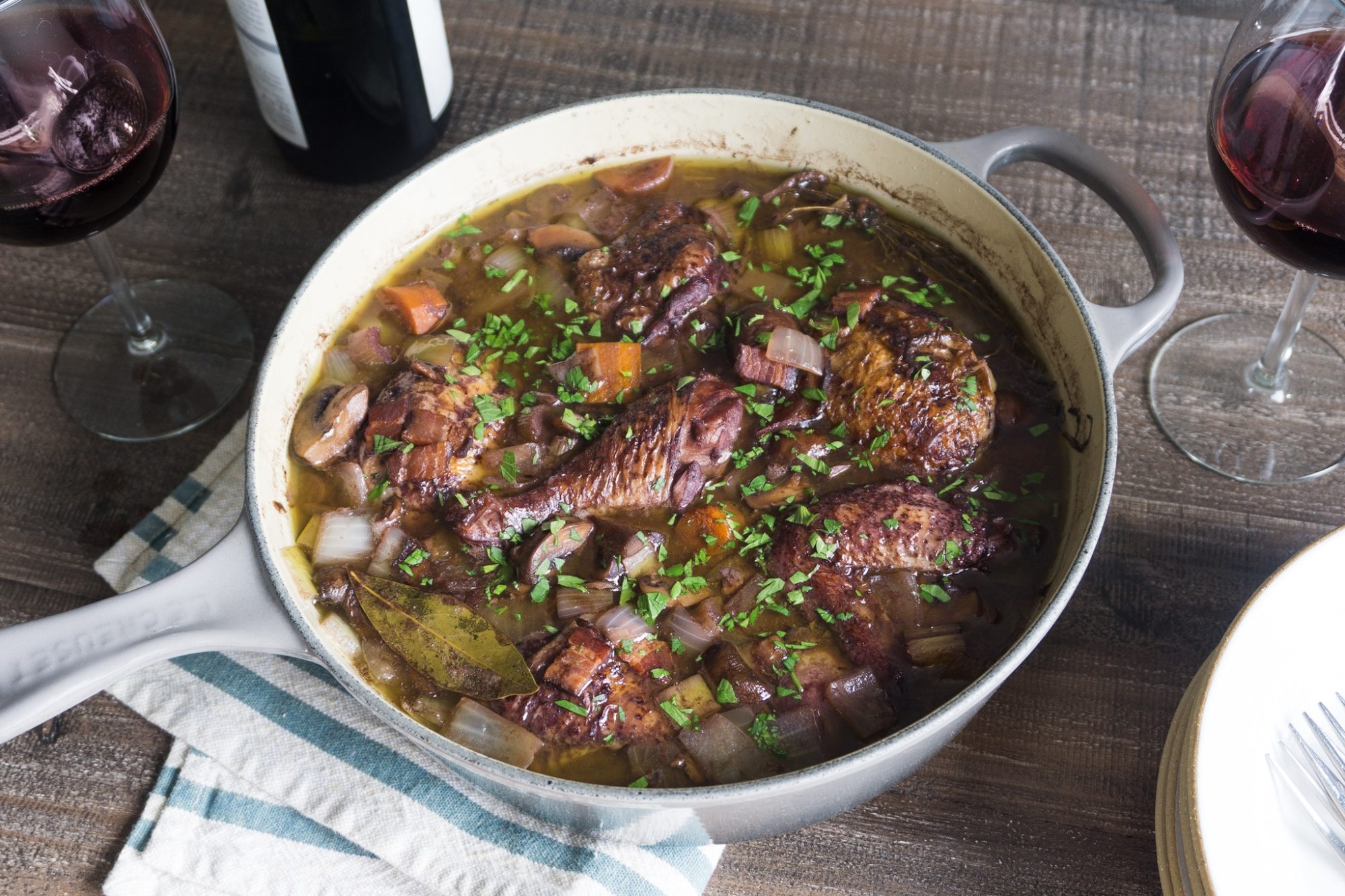 Traditionally an old rooster braised in Burgundy, the classic French dish has many faces. Braise the roof!

When coq au vin comes to mind, images of the French countryside arise—where someone’s maman has been cooking all day in her now aromatic kitchen with an open bottle of Burgundy at the ready. However, according to legend, this traditional dish of rooster (a mature male chicken) in wine—held so closely to the identity of French cuisine—is in fact Roman. “Originally, coq au vin is a recipe that goes back to Emperor Julius Caesar’s conquest of Gaul [a region that included present-day France],” Antoine Westermann, the Michelin-starred French chef behind Le Coq Rico in Manhattan, explains. “When Caesar won the war, he served this dish to the Gaul army leaders. The rooster was at that time the symbol of Gaul, and serving it cooked was part of his dark humor.”

Over time, this technique of cooking poultry in wine became ingrained in the culinary traditions of ancient France. With intense pride in the specific wine culture from each region, you can find variations of the dish throughout the country as different as the wines themselves—like chicken in vin jaune (the yellow wine found in the Jura region of eastern France) with fragrant morel mushrooms, for example. However, the version that you’ll most often find on a French menu uses Burgundy wine, aromatic vegetables, mushrooms, and bacon for a braise that’s both rich and comforting, especially during the colder months. Coq au vin’s popularization across America is credited to Julia Child, who featured a recipe for this dish in her iconic Mastering the Art of French Cooking, first published in 1961. The dish entered  the homes of Americans as she prepared it on her broadcast television show for the entire country to watch.

With Child working up our appetites for coq au vin, there are some crucial tips from French chefs for making the dish at home. Tatiana Levha, the chef and half of the sister team of Le Servan in Paris, breaks the dish down into four components: a good chicken, a good Burgundy wine, slow cooking, and low heat. For the chicken, both Levha and Westermann believe the bigger, the better. Using at least a five-pound chicken will yield enough meat to be able to share with the entire family, especially given the dish originally used a large rooster.

As for the wine, it’s all about the pinot noir grapes for a light body that will pair well with the chicken without overpowering the other flavors in the dish. While Burgundy is traditional, Westermann also enjoys using a bottle from Santa Rita Hill, California. Most importantly, both chefs shared the same technique for a cooking a flawless coq au vin: Break down the bird first—separating dark and white meat—and braise the dark meat low and slow, then add the seared breasts at the very end to cook them through. The result is super tender legs and thighs alongside juicy white meat, all coated in a rich wine sauce.

By the time the dish is done, the aroma of bacon and wine will have diffused throughout the home, signaling to your guests to prepare for the feast. As for what to serve alongside your coq au vin, Westermann stays true to his French upbringing, spooning the stew over cooked egg noodles. On the other hand, Levha does a little nod to her Filipino heritage, serving it over rice with fresh cilantro and plenty of chiles. Either way, you can’t go wrong—just be sure to have plenty of wine on hand and get ready to braise the roof.

Jake Cohen is a food writer, recipe developer, and nice Jewish boy from NYC. He previously worked in the test kitchen of Saveur Magazine and as the food editor of Tasting Table. When he isn't cooking, he's constantly eating and documenting it on his Instagram, @jakecohen.