Get a free recipe
Subscribe
A Pinch of Salt and a…Dash of Angostura?
By: Laurel Miller Photos: Denny Culbert 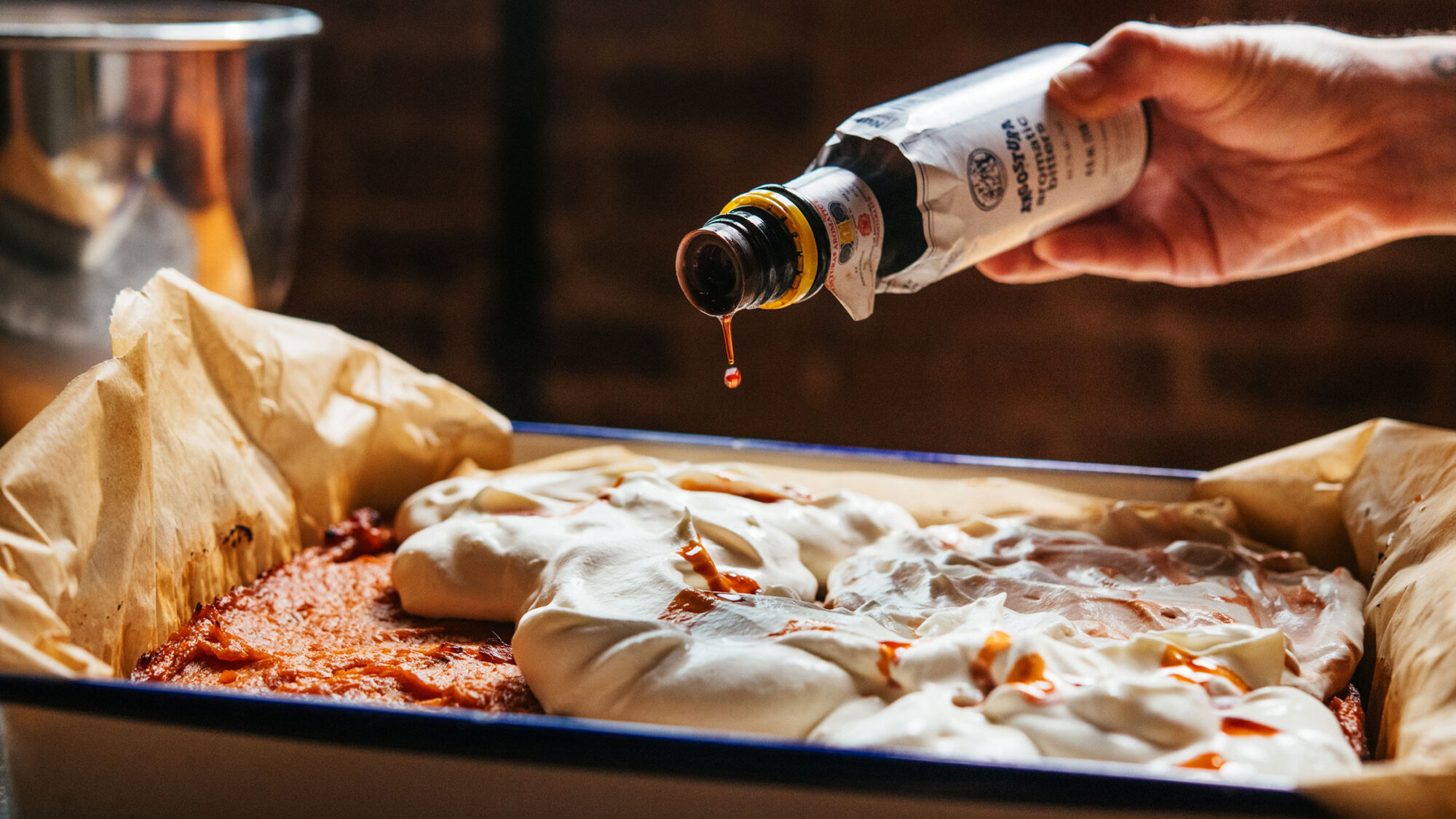 The iconic bitters brand has been adding a pink tint and a touch of spice to cooking since Prohibition.

While the culinary tips currently printed on the oversize paper label on a bottle of Angostura bitters would have you believe otherwise, there initially wasn’t much kitchen experimentation happening at the House of Ango. The aromatic bitters—created in 1824 by Dr. Johann Siegert, a German physician living in Angostura, Venezuela, and now ubiquitous at quality cocktail bars, well-appointed home bars, and places to drink in between—was originally developed as a medicinal aid while Siegert was surgeon general of Simón Bolívar’s armies. It worked, and in 1850, Siegert retired from the military to focus on his growing company. He began exporting Angostura to England, the United States, and throughout the Caribbean, where the curative quickly caught on.

Five years after Siegert’s death in 1870, the family and the company relocated to Trinidad and Tobago to escape political unrest in Venezuela, and his sons, Carlos, Alfredo, and Luis took over the business. The timing was fortuitous, as the Golden Age of Cocktails was just over a decade old, and soon Angostura was rebranded as an indispensable cocktail component—one that “lends the aromatic fragrance of the tropics to your liquor,” according to a 1902 ad from distributor J. W. Wuppermann. The same ad also promised that Angostura “strengthens the jaded stomach,” presumably in the event too much fragrant spirit was imbibed.

The company conceived of new ways to use Angostura beyond the bar and medicine cabinet, promising consumers it provided “exquisite flavor” to everything from fruits and salads to fish.

Not until Prohibition, with the Volstead Act effectively making the consumption of alcohol illegal from 1920 to 1933, did Angostura’s marketing machine tout bitters as a culinary “flavor enhancer” in order for the business to survive. Unlike its competitors, Angostura “managed to convince U.S. government officials that it was too bitter to drink on its own, allowing it to be sold legally during Prohibition,” sayd Mark Bitterman in Bitterman’s Field Guide to Bitters and Amari. Still, it was by necessity that the company conceived of new ways to use Angostura beyond the bar and medicine cabinet, promising consumers it provided “exquisite flavor” to everything from fruits and salads to fish. The company’s effort to transport bitters from the bar to the home kitchen continued in 1958 with the arrival of The Secret of Good Taste: The Angostura Cook Book, instructing Americans on how a dash of bitters could give everything from Tunanoodle Dinner to Meat Ball Gems “a splash of international flair.” By the early 1960s, even Angostura’s label was featuring culinary tips; it noted that everything from grapefruit and soups to “mince” and puddings benefited from a dash of bitters.

While some of the brand’s concoctions over the years—like celery stalks stuffed with Angostura-spiked cottage cheese—read as a bit contrived, many of the midcentury recipes are still relevant today. Scrambled eggs, sauces, and cream of mushroom soup get a boost of umami from a few drops of the inky liquid, while cold-weather dishes like candied sweet potatoes with Angostura crème fraîche open up new possibilities for an old classic. Bitters also work well in desserts, adding an evocative hint of spice to chocolate sauce and piquancy to apple crisp, according to the company’s website.

Running parallel to Angostura’s rise in the United States is the use of bitters in the West Indies—where Jamaicans, Trinidadians, and Barbadians have been fanatical about bitters since the brand’s inception—but they use the ingredient more in beverages like rum punch or as a finishing touch to gin and tonics. Mixed with hot water, it’s used as a remedy for an upset stomach (or a hangover).

Says Jamaican chef and author Michelle Rousseau, who co-owns a restaurant in Kingston called Summerhouse with her sister, Suzanne, “We often use chutneys, pepper sauces, and hot pickles as flavor enhancers or additions to a meal, but not bitters. Still, Angostura is so wildly popular; the brand is synonymous with the ingredient. When you say, ‘add a dash of Angostura,’ everyone knows exactly what you mean.” After 196 years in business, so they should.