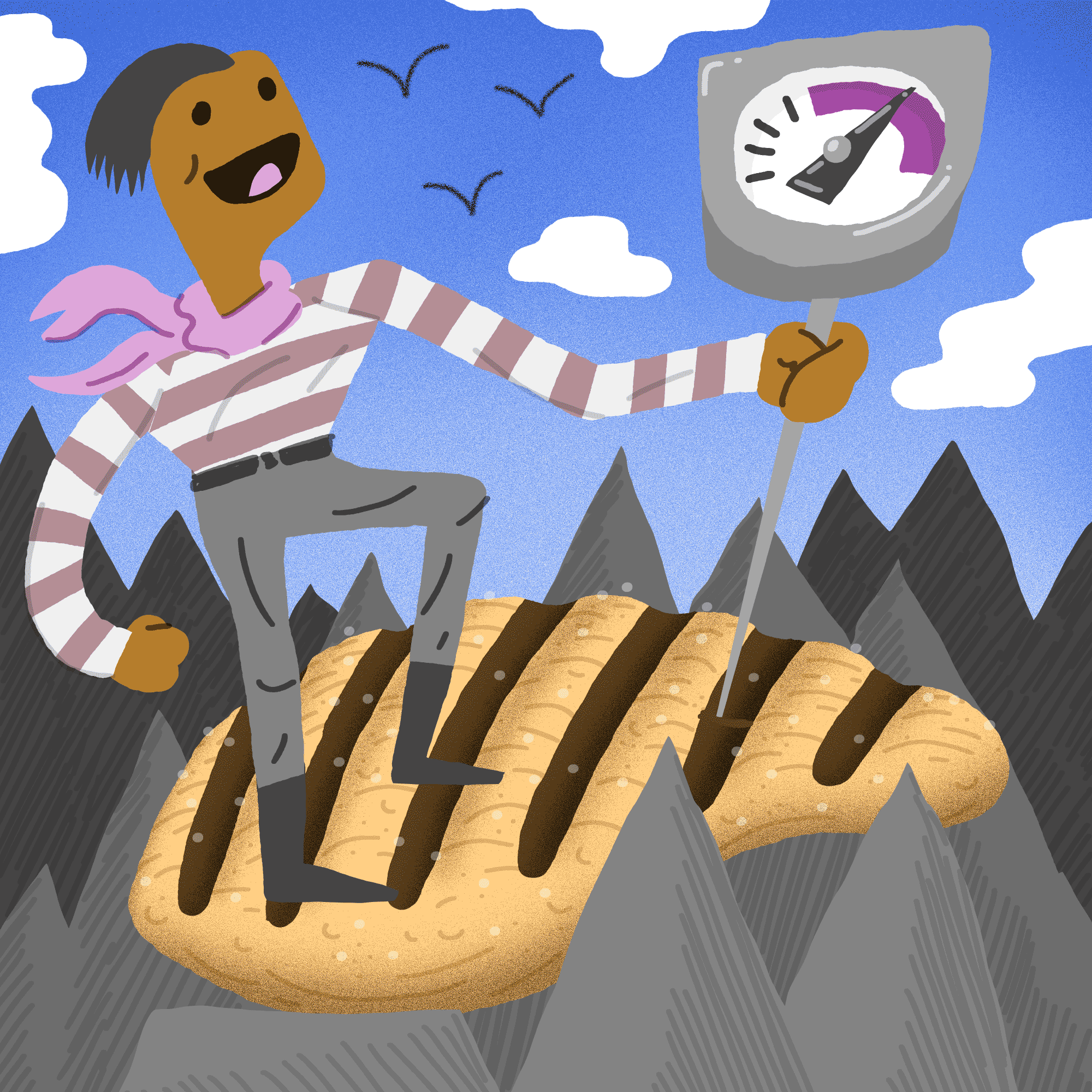 For most of human history, cooking temperature was measured with intuition and instinct. Is the current glut of ever more precise kitchen tools an improvement—or a crutch?

Through years of anecdotal observations in home kitchens of all kinds, I’ve found that there are two categories of home cooks: the eyeballers and the precisionists.

The eyeballers treat recipes as mere recommendations—add a few tablespoons of lime juice, whisk vigorously (at least until your arm gets tired), bake for 20-ish minutes. The precisionists remember to let their eggs reach room temperature before baking; they chop onions uniformly; they set timers for toasting almonds. And more often than not, precisionists love tools.

With the recent yapping about the godsend of the sous vide machine—a tool that cooks meat (and whatever else) at its exact recommended temperature for exactly as long as a recipe states—the precisionists seem to have won out over the eyeballers when it comes to navigating temperature in the kitchen. To boot, every household has a digital meat (or all-purpose) thermometer now. And a programmable electric kettle. Your slow cooker will babysit your kid. Your Instant Pot is also a wedding officiant.

Though it is difficult to recall, there once was a time when the kitchen wasn’t ruled by gadgets. The oven thermometer wasn’t patented until 1915; sous vide only gained prominence in the latter half of the 20th century. But humans have been cooking and baking and feeding ourselves and our loved ones for thousands of years. It was during these thousands of years—let’s call it “most of recorded history”—that the eyeballers and their well-trained instincts reigned.

Before there were tea kettles that allowed a user to select six different options for water temperature, there was The Record of Tea. During the years 1049-1053, the Chinese calligrapher Cai Xiang wrote a guide to what your water should look like at different temperature points, to be used for different kinds of tea. If you see tiny “shrimp eyes” in your water, he wrote, the water is roughly 155°F. If you see “crab eyes”—a slightly bigger bubble—then you’re reaching 175°F. Larger “fish eyes”: 185°F. String of pearls: 195°F to 205°F. And finally, when your hot water has reached a rolling boil, or a “raging torrent,” you know that your water is 212°F.

Another age-old temperature trick? When deep-frying at home, resist the instinct to grab that digital thermometer to guarantee your oil is at a steady 360°F. Instead, go for a grain of rice and throw it in the pan: if the rice pops back and begins to cook, your oil is ready. Or even better, dip the handle end of a wooden spoon into the oil. When it begins to bubble around the handle, you’re as ready as you’ll ever be to whip up a batch of donuts.

If you find yourself relying too heavily on your meat thermometer, think of the generations of cooks who have employed the poke or finger test, which posits that a medium-rare steak should feel like the fleshy part at the base of your thumb when touched with your middle finger. This method has, however, incited some controversy: On Serious Eats in 2013, J. Kenji López-Alt railed against it, asserting that there are “so many uncontrolled variables in this assay that it boggles the mind that anyone would think it’s at all accurate. First off, not all hands are created equal. My thumb is squishier than my wife’s thumb.” Of course, these variables matter, and it stands to reason that López-Alt, who bats for the precisionist team, would feel strongly about a perfectly cooked piece of meat.

Samin Nosrat, the author of Salt, Fat, Acid, Heat: Mastering the Elements of Good Cooking, tells me by phone where she falls on the eyeballer vs. precisionist spectrum. “If your fear is poisoning your family with uncooked chicken, then why didn’t you just poke the chicken to see if it was raw inside?” she asks. “The reason that you probably didn’t, or that people think that’s not okay, is they feel they need to bring something perfect to the table. But let me tell you a secret: Even in the fanciest restaurants, cooks are standing there, poking their chicken breasts to make sure they’re cooked all the way.”

“There’s nothing inherently wrong with using those tools, but you have to use them to enhance your cooking—they can’t be your cooking,” Nosrat continues. “Those tools can’t help you if you have zero sense for what it is you need to be doing.”

In her own kitchen, Nosrat has turned both to tools and her personal instincts to navigate temperature; she describes the former as useless without the latter. “If you set your oven to 350 degrees, it doesn’t heat to 350 degrees; it heats to 370 degrees and then it clicks off. Then it drops, drops, drops. Only when it drops all the way to 330 degrees will it click back on again,” she explains. “The idea that you’re baking anything at the steady temperature of 350 degrees is totally insane. It’s totally meaningless.”

“Let me tell you a secret: Even in the fanciest restaurants, cooks are standing there, poking their chicken breasts to make sure they’re cooked all the way.”

Nosrat instead recommends two different tricks for baking with an unreliable oven temperature. The first: Familiarize yourself with your appliances. “I know it is 25 degrees off. I just know it is,” she says of her “crappy 1972 oven.” The second trick, perhaps for the more laid-back cook, is to wave your arm in front of the oven once it’s preheated. “If you open an oven and a blast of heat comes out, you know it’s around 500 degrees. If it’s gentle and comfortable to stand there, then it’s probably 300 degrees.” Nosrat suggests. “The concept of temperature is very mercurial.” (Pun not intended, but warmly embraced.)

As for ambient temperature, meaning the climate in your kitchen while you’re cooking or baking, use common sense. “If it’s a really hot day”—the kind that softens butter—“maybe don’t make pie crust,” Nosrat says.

There are, of course, conventional reasons why we monitor temperature when we cook. Precisionists deserve some credit, after all. If you serve your family a chicken with an internal temp of, say, 94 degrees, they may be infected with salmonella and perish (there were 450 salmonella deaths estimated last year). For this reason, the USDA keeps a handy and occasionally updated chart that lays out safe internal temperatures for cooked meat. Chicken: 165°F. Ground meats: 160°F. Eggs: 160°F. The chart even goes so far as to tell you how hot your leftovers should be before they’re considered safe (for the record, it’s 160°F hot).

Maybe you are tired of never quite nailing a medium-rare steak or perfectly poaching an egg or getting your custard to set just so. Like the polio vaccine, a thermometer is the home cook’s friend.

But unlike the polio vaccine, it was possible to figure these things out without poisoning our loved ones long before the meat thermometer, the sous vide machine, the induction stove, the airplane-food-adjacent smart oven, the temperature-controlled kettle, the electric proofing box, and the WiFi-enabled slow cooker came into cultural relevance. Gadgets may make precisionists out of eyeballers, but a precisionist who was not at one point an eyeballer might spend a fortune on gadgets while remaining poor in skill.

“We are so conditioned by the universe and by capitalism to believe that we don’t know anything,” Nosrat says. “The truth of the matter is, you actually know a lot more than you think you do.”