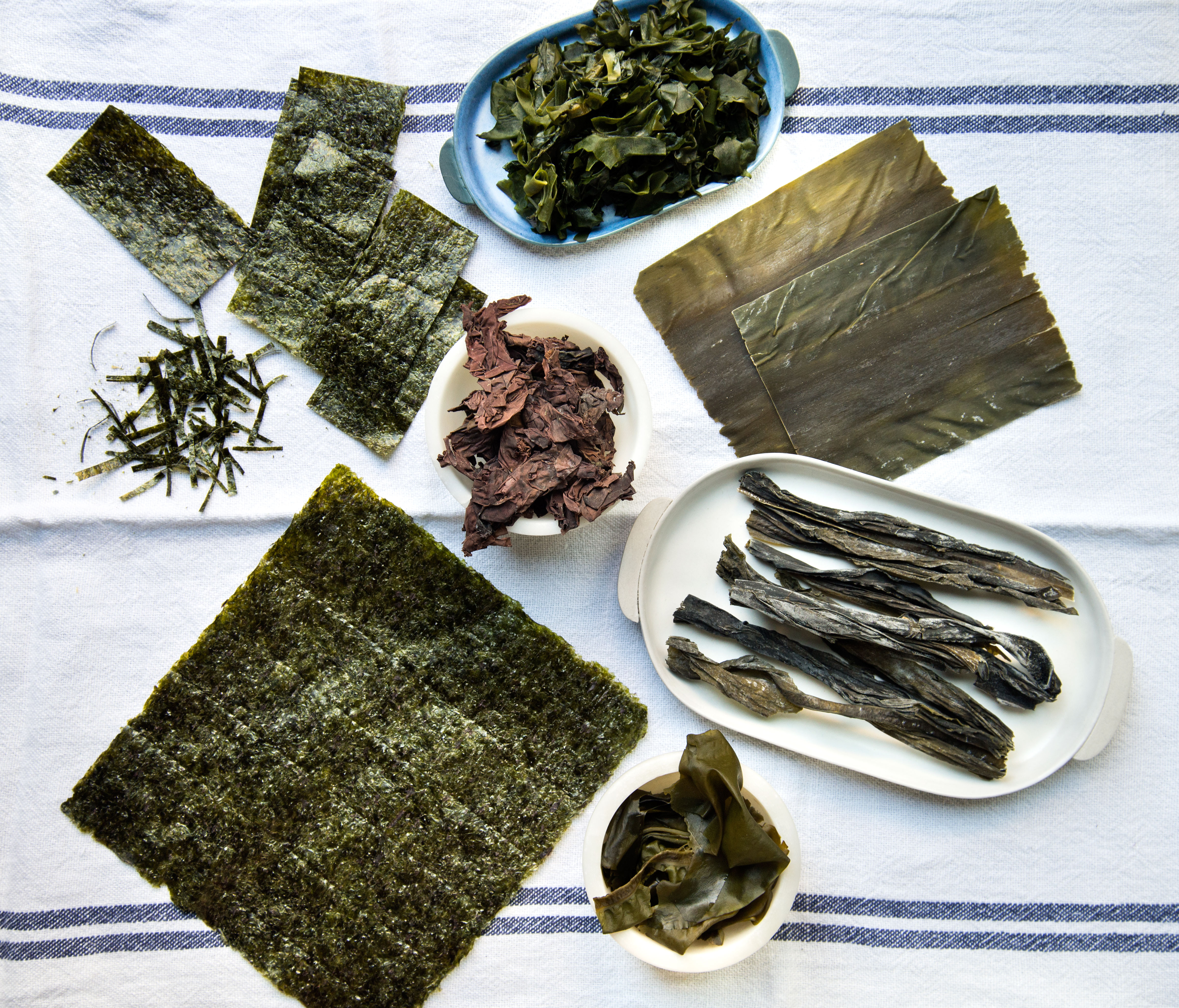 If you’ve swam in the ocean and gotten your feet tangled in a slimy plant, then you’ve encountered seaweed. And if you’ve enjoyed a California roll at your favorite Japanese restaurant, then you’ve consumed it. Seaweed is becoming more and more a part of our culinary worldview. But what exactly is it? The vast variety of “weeds” that grow in the sea that we refer to as seaweed are actually marine algae. Seaweed belongs to three broad groups of algae, encompassing more than 10,000 species: red (nori, agar, dulse), brown (kombu/kelp, wakame, arame, hijiki), and green (sea lettuce, aonori). Seaweed grows in all types of seawaters—from the ice-cold poles to the warm waters near the equator. As long as there is sufficient sunlight for photosynthesis, seaweed can grow.

While seaweed has perhaps become “trendy” in the United States in recent years, it’s been a staple in many diets around the world for generations. Seaweed is found in East Asia, most notably Japan, China, and Korea, as well as Scotland, Ireland, Norway, Iceland, New Zealand, and the Pacific Islands.

Seaweed offers one of the broadest ranges of minerals of any food, containing virtually all the minerals found in the ocean (calcium, copper, iodine, iron, magnesium, manganese, molybdenum, phosphorus, potassium, selenium, vanadium, and zinc—to name a few). It’s also been touted for its anti-inflammatory, anticancer, anticoagulant, antithrombotic, and antiviral properties. Super food? This is a supreme food.

Seaweed can be briny and salty. Its texture can range from rubbery to crispy and crunchy. It’s naturally high in glutamic acid, which is a flavoring agent most notably found in monosodium glutamate (MSG) and responsible for its umami taste. As for its uses, seaweed can be added to dressings, compound butter, spreads, soups, stews, salads, eggs, rice, noodles, and even desserts. Let’s explore the different categories of seaweed.

Red Algae: Nori, Agar, Dulse
You might be most familiar with nori, the purplish-black seaweed often found wrapped around rice in the form of sushi. Nori is made by shredding seaweed, pressing it into thin sheets, and rack drying. You can buy the sheets toasted or untoasted—or toast them yourself by holding a sheet over a flame of a gas burner for a few seconds until it turns a dark green color. In addition to sushi, nori is commonly used in onigiri (Japanese rice balls) and as a garnish for rice, soups, and stews.

Agar is another type of red algae and is widely used as a vegetarian gelatin substitute given its unique gelling properties. Dulse is a red algae that can be found in whole-leaf, flaked, or granule form, and even smoked (I recently purchased applewood smoked dulse at a local health-food store). Dulse is soft and chewy and doesn’t require any soaking or cooking. You can add it to salads, soups, or even omelets. When you pan-fry dulse in a little oil, it takes on a distinct bacon-like flavor, especially the smoked variety (I was a bit skeptical at first, but it really does taste like bacon).

Brown Algae: Kelp, Kombu, Wakame
Kombu is an essential ingredient in Korean and Japanese cooking. It’s one of the main ingredients in dashi, a classic Japanese stock, along with bonito flakes (katsuobushi in Japanese). Dashi is the foundation of many soups and stews, including the popular miso soup. You can also add a piece of kombu to a pot of simmering dried beans to enhance their flavor and digestibility. Wakame is a type of brown algae that comes from the cold waters off the coast of Japan, China, and Korea. It expands nearly tenfold and turns a dark greenish color when soaked. It’s an essential component of miso soup and often used in salads. I’ve even encountered wakame in a sea-vegetable sauerkraut that was quite tasty.

Green Algae: Sea Lettuce, Aonori
Sea lettuce is typically used in salads and soups. Aonori is typically dried and then made into a powder.

And here are some simple ways to cook with seaweed at home.

THE ULTIMATE SEAWEED SALAD
This salad incorporates three different types of seaweed: wakame, dulse, and nori. Wakame, simply rehydrated and chopped; applewood-smoked dulse that I crisped up in a little oil, which adds a nice crunch and toastiness to the salad; and toasted nori in the form of furikake, a Japanese sesame-seed-based condiment. From there, add seasonal vegetables, avocado, rice/grains, etc. I like to add some spicy radish microgreens on top. All drizzled with a miso-ginger-soy dressing. Layer upon layer of umami.

DIRECTIONS
1. Place the wakame in a bowl and cover with water. Soak until soft, about 5 minutes. Squeeze dry. Chop into bite-sized pieces.

2. Coat the bottom of a skillet with a thin layer of oil. Heat the skillet over medium high heat. When the oil is hot, pan-fry pieces of dried dulse for 30 seconds to a minute, until the dulse gets crispy. Remove from the pan and set aside to cool.

3. Arrange wakame, avocado, carrot, cucumber, and radish in a bowl. Drizzle with miso-ginger-soy dressing. Top with microgreens. Sprinkle dulse and furikake on top.

1. Add all ingredients to a bowl, along with 2 tablespoons water. Whisk until well combined.

HOMEMADE FURIKAKE
In addition to sushi, one of my favorite uses for nori is in furikake, a savory Japanese seaweed condiment typically sprinkled over or mixed into rice. There are many commercially made furikake available for purchase, but it’s easy enough to make yourself. At a minimum all you need are nori, sesame seeds, bonito flakes (or katsuobushi, dried, paper-thin flakes of skipjack tuna), and salt. From there, you can add any number of extra ingredients. For instance, you can add spices, such as togarashi or cayenne; dried lemon or orange peel; dried fish, such as anchovies; or powdered miso. I like to add dried shiso leaves (an herb in the mint family that tastes like a cross between mint, cilantro, and basil) to the mix.