Get a free recipe
Subscribe
Cooking in the Age of Deadly Romaine
By: JJ Goode Photo: Lizzie Munro 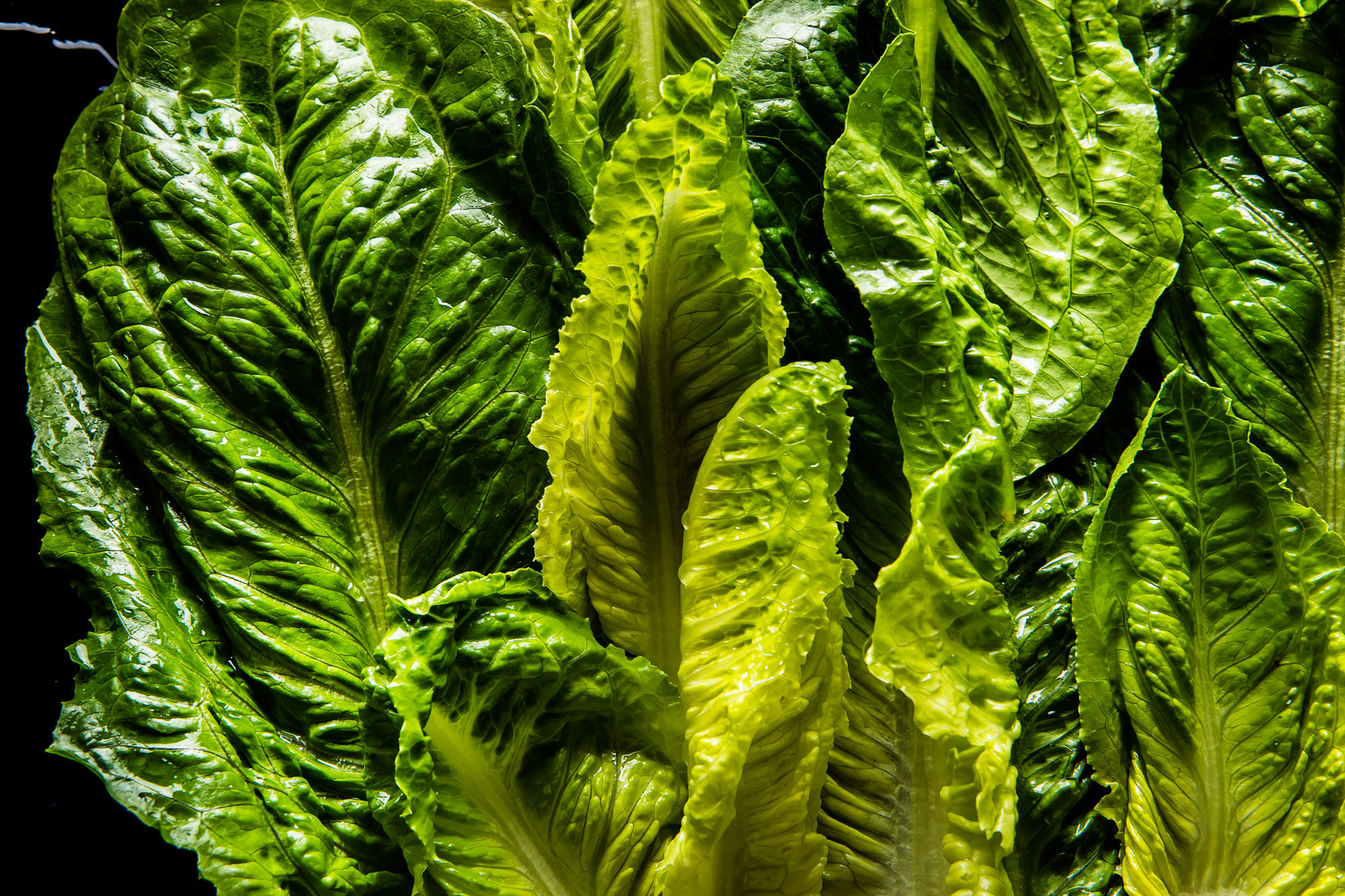 A veteran cookbook writer prone to “catastrophizing” answers the question: to wash or not to wash?

If I’ve learned anything during my years writing cookbooks with chefs, it’s that no kitchen victory comes without toil. What appears easy in the estimation of professionals is actually quite difficult for the rest of us. This is true even for mundane kitchen duties. Take the anxiety-inducing, time-consuming, occasionally inscrutable, and always inglorious task of washing produce.

Somehow, every time I begin the obstacle course of cooking dinner, during which I must dodge my two children’s plaintive pleas and grubby fingers in a race to the finish line, I forget that whatever simple meal has taken shape in my mind requires not just slicing and sautéing, chopping and roasting. I forget that I must also devote a solid 20 minutes to the eradication of soil and grit, mildicides and insecticides, Escherichia coli, and measles, and cancer.

For my chronic failure of imagination, I blame my bosses. By the time my notepad is out and my chefs are ready to demo a dish, their minions have already bathed Bibb lettuce, scrubbed spuds, and buffed broccolini, because we’re short on time and because part of being the boss is having someone else do the scut work. Also to blame is the sleight of hand of food TV, though if Ina must make three dishes in 22 minutes, it’s only right that the camera capture her gleefully spooning gorgonzola sauce on filet mignon, not salad-spinning Jeffrey’s spinach. Cookbooks are no help, either. Aside from sparing a sentence for finicky fungi and alliums, written recipes barely have room for cooking instruction. The fact that carrots shouldn’t go straight from store bin to sheet pan is left unspoken.

And so washing vegetables has become a bit like washing your body: While practically everyone does it, they typically spare you the details. This is mostly for the best, because a glimpse into the other people’s habits can be harrowing, as anyone who has witnessed some reckless maniac dump boxed greens directly into a salad bowl can attest. For a hypochondriacal cook in the age of poison romaine, this is as disturbing as a washcloth devotee learning that a roommate rubs bar soap directly on his bits.

There is, of course, the official line on washing. And because I am a devoted follower of medical counsel, I’m ashamed to admit to a distrust of the bureaucracy’s position on hygiene. The FDA recently retracted its recommendation on rinsing raw poultry, which turns out to be a highly effective way of producing salmonella spatter, so when they advise washing, scrubbing, rubbing, and busting out vegetable brushes, you’ll pardon me if I don’t immediately apply their culinary risk-reward calculations to my pint of farmers market raspberries. And anyway, how does all this squeegeeing square with the burgeoning scientific consensus that for the sake of our immune systems we should be less obsessive about cleanliness, not just following the five-second rule but possibly even extending it by a few minutes.

Washing vegetables has become a bit like washing your body: While practically everyone does it, they typically spare you the details.

My internal conflicts aside, I ultimately follow my own improvisatory protocol, which, since I dread in nearly equal measure poisoning my guests and subjecting them to meal-ruining grit, stops just short of employing a medical-grade autoclave. I triple-wash triple-washed greens. I pummel tomatoes and peaches with high-pressure faucet spray, envisioning all those grubby norovirus-ridden shoppers fondling them at the supermarket. I scour potatoes like a grill grate after Labor Day, then proceed to carve off stubborn schmutz, nascent eyes, suspicious dents, and green-hued nubbins, imagined and not, until my fingerlings look like Jerusalem artichokes. I wash so diligently and so obsessively that I’ve lost track of what I’m trying to wash off.

Being no stranger to what my therapist would call catastrophizing, I decided to perform a sort of self-intervention and sought out perspective from smart people who might not necessarily share my peccadilloes. Sure, you shouldn’t chomp on a freshly dug carrot, but isn’t flesh, not flora, the real fiend?

My first mistake was looking to an epidemiologist for comfort, which is a bit like looking to a climate scientist for encouragement on the purchase of beachfront property. “There’s danger everywhere,” she says, before our conversation had reached the two-minute mark. Then the scientist, who investigates disease outbreaks for a state health department and who requested anonymity so she could speak frankly, ticked off a list of foods she will never consume: raw cookie dough, hamburgers taken to any degree less than incinerated, scrambled eggs at a diner, and the Monte Cristo, essentially a griddled ham-and-cheese whose egg-soaked bread is so unreliably cooked through that her boss gave the dish the nickname “el Panino della Morte”—the Sandwich of Death.

At home, chicken is a frequent culprit, says the disease detective, explaining that to avoid cross-contamination, she goes after with Clorox wipes any spots her chicken hands may have touched with the vigor of someone trying to “cover up fingerprints from a murder.” Lest you think only meat and eggs disturb this food-safety vet, she clarifies: “What’s really troubling are fruits and vegetables.” So much of what we eat comes from abroad, her thinking goes, where hygienic standards vary, and then it must travel via trucks and warehouses and planes to the Stop & Shop shelf. And there it sits, looking free of grime but potentially teeming with germs. And unlike meat with eggs, we don’t always attempt to exterminate those germs in a hot pan.

Unsettled, I went in search of reassurance. Perhaps an expert home cook, who had experience balancing serving dinner with the various safety and aesthetic concerns, could provide solace. Then I learned that Carla Lalli Music, Bon Appétit magazine’s food director and the author of the new cookbook Where Cooking Begins, washes melon.

Not even I wash melon! Instead, I lean on my homemade Hygienic Force Field Theory, which allows me to skip washing foods with inedible skins, like cantaloupes, lemons, limes, papayas, and onions. Well, not anymore. “When melons grow, they sit on the dirt, which can contain chemical-y things that stick to their textured, webby skin,” Music explains. “When you cut melons, the knife can drag the pathogens into the flesh.”

Yet while Music is careful, she is unafraid. In fact, she welcomes visibly dirty produce, which she rinses, soaks, and scrubs to remove supper-spoiling grit, and actively avoids stuff that’s too clean. “The cleaner it is, the more it’s been handled, and the more likely it’s been contaminated,” she says.

I was almost ready to stock up on antibacterial fruit-and-vegetable wash, when some light Googling revealed some disturbing information. Washing won’t save us. According to Consumer Reports, even diligent cleaning won’t rid lettuce of dangerous bacteria, which clings to the leaves and hides out in microscopic crannies. According to the Journal of Agricultural and Food Chemistry, it won’t rid apples of pesticides, some of which remain on the peels even after a 15-minute soak in baking soda solution and nonetheless have already seeped into the fruit’s flesh. Practically nobody besides manufacturers of fruit-and-vegetable wash recommends fruit-and-vegetable wash.

Nothing is safe, not even my pet vegetables, cabbage and radicchio, which I had always assumed must be pristine beneath the seal of their outermost layer. Yet as my anonymous fearmonger explains, discarding the exterior leaves might not spare you. “People who study this are now thinking, ‘Uh oh, maybe pathogens are drawn up through the roots into the structure of the plant’”—the botanical version of “The call is coming from inside the house.”

It took a session with Arielle Johnson, Zoloft in human form, to unfurl my body from the fetal position. Johnson holds a PhD in agricultural and environmental chemistry, was the head of research at MAD (René Redzepi’s culinary think tank), and is writing a cookbook. She is the kind of special soul who describes dirt as “matter out of place,” will patiently explain how soap works, and will even draw you a diagram of its polar heads and nonpolar greasy tails on a sauce-spattered napkin. She is also the kind of reckless maniac who doesn’t wash prewashed greens. Unless you’re immuno-compromised, she tells me, “Washing is risk mitigation.” You do it to reduce, though not erase, the small chance that chomping on a plum will send you to the ER. Or you might not do it—deciding that sparing sponge-like mushrooms a rinse so that they brown, not steam, as they roast is worth the chance of a little lingering smut or that the time saved not washing iceberg is worth the Mega Millions–like gamble of contracting listeriosis.

As anyone who has ever driven a car or left the house knows, sometimes you understand something is risky, but you do it anyway—with your seatbelt buckled and your pepper spray discreetly tucked in your pocket. Johnson doesn’t wash boxed arugula for a weeknight bowl of farro and greens. Music doesn’t wash the broccoli that she shreds raw for a riff on Caesar. Even a Monte Cristo–phobic epidemiologist courts contamination once in a while. “Sometimes I’ll reach in my fridge, grab some blackberries”—unwashed, unclean, and possibly colonized by plague—“and eat them,” she says. “But I don’t recommend it.”