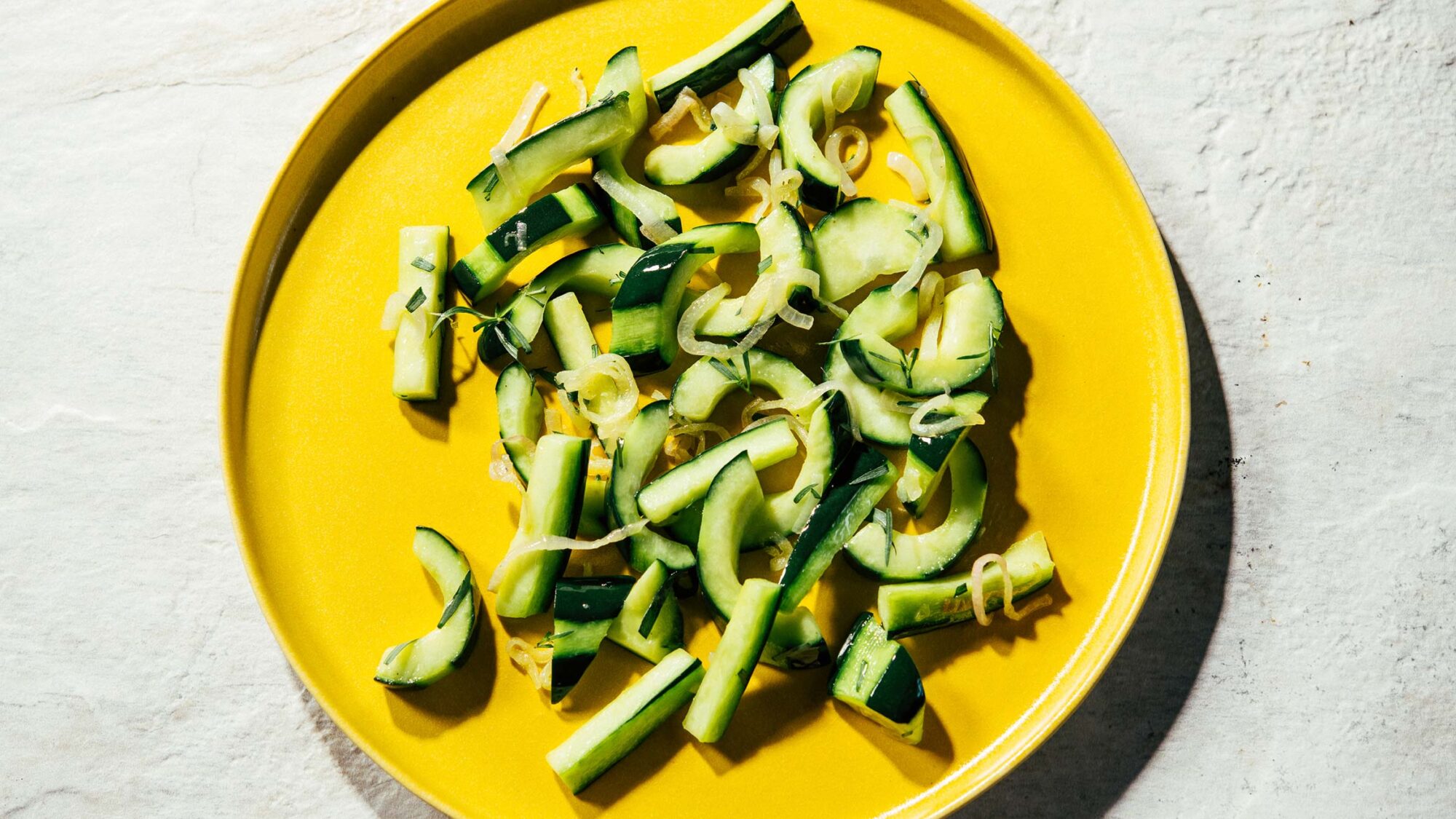 Forget what you know, and think beyond the crisp, cold crunch.

It is paramount, when New Orleans’ summer doldrums drape their gravity-blanket selves over the city as they now have, to possess a mindless cucumber recipe. Mine is a tumble of salted sliced cucumbers mixed with red onion, mint, vinegar, and olive oil. As Elaine Stritch once said, perhaps apocryphally when brought to a club late one night in the 1960s, “Just give me a bottle of vodka and a floor plan.” I feel you, Stritchy. What I need for cooking in July and August are the essential ingredients and a road map. Zero thinking, please. Well, I need watermelon slabs and juice, too, but I digress. The heat warps the brain.

I hit a cucumber wall a few weeks ago. I discovered I can only eat so many raw cucumbers while the seeded fruit propagate unabated during their growing season, lasting from early spring to late summer, depending on your locale. I started looking at the cucumbers in my crisper with fresh glances. Seeing what more they wanted from me; taking in the shape of them. No, not like that. No judgment, though—these are trying times. As I stared into the middle distance with the refrigerator door open, I remembered seeing cooked cucumbers referenced in two cookbooks. First, Julia Child’s The Way to Cook, originally published in 1989. In one recipe, she has you julienne cucumbers, then season them with salt and wine vinegar before cooking them in a skillet with butter. Minimal heat in the kitchen from the stovetop. Into it. The precision stroke work of julienning? Less so. I turned then to Cucumbers, one of the small, appealing single-subject cookbooks from Short Stack Editions. There are two recipes for cooked cukes in there, and I figured I may as well ask its author, Dawn Perry, her opinions on heat plus cucumbers. I mean, Julia Child is not about to take my call. “How much can a cucumber do?” Perry told me she asked herself when she was creating the recipes for the book. “Cucumbers are friendly with vegetables like zucchini, so why couldn’t I treat them as such?” Both cucumbers and summer squash are fruiting members of the Cucurbitaceae family. They are more alike than different, but for cucumber’s wicked crunch when raw. They even have similar water contents. For one of Perry’s recipes, butter-baked cucumbers, she had stumbled on Julia Child’s way of cooking cucumbers while researching. Perry took hers to the oven, adding thinly sliced shallots and basting the face-up, skin-on cucumber halves with butter as they roasted for 20 minutes. I was not about to activate my oven. Instead, I merged the two approaches.

I had had it with seeds, so I halved the cucumbers lengthwise and removed their innards with a spoon. You can peel the cukes, if you like. I think it is imprudent, unless the skins are caked with wax, as so many supermarket cucumbers tend to be. The skin on these hothouse cukes are often thick and bitter, and the seeds are sizable, too. I then cut my seeded cucumber halves into chunks and, like Perry, slivered some shallot rings. Into a skillet went butter, then the shallot. Once the shallot was translucent, in minutes, in went the cucumber chunks and salt. Toss and stir, until the cucumbers go the tiniest bit squishy. This takes mere minutes. You want them to fight back when you bite, then comply. Lemon, cream, herbs: There are many ways you could finish these cucumbers. Because there is fat involved in cooking them, the cucumbers bleed their plucky essence into the butter. That means they create their own sauce, of sorts, which raw cucumbers cannot and will not do, and they would be superb alongside most any simply cooked protein. A grilled fish fillet, a sautéed chicken cutlet, poached shrimp.

As it goes, I soon stumbled on additional ways with heating cucumbers. Of course, Thai cuisine knows from cooked cucumbers. David Thompson’s Thai Food features two intriguing examples: a tamarind curry in which sea bass and cucumbers simmer together; and a stir-fry of cucumbers, steamed pork belly, and eggs. I have no strength for either until next summer. Maybe.