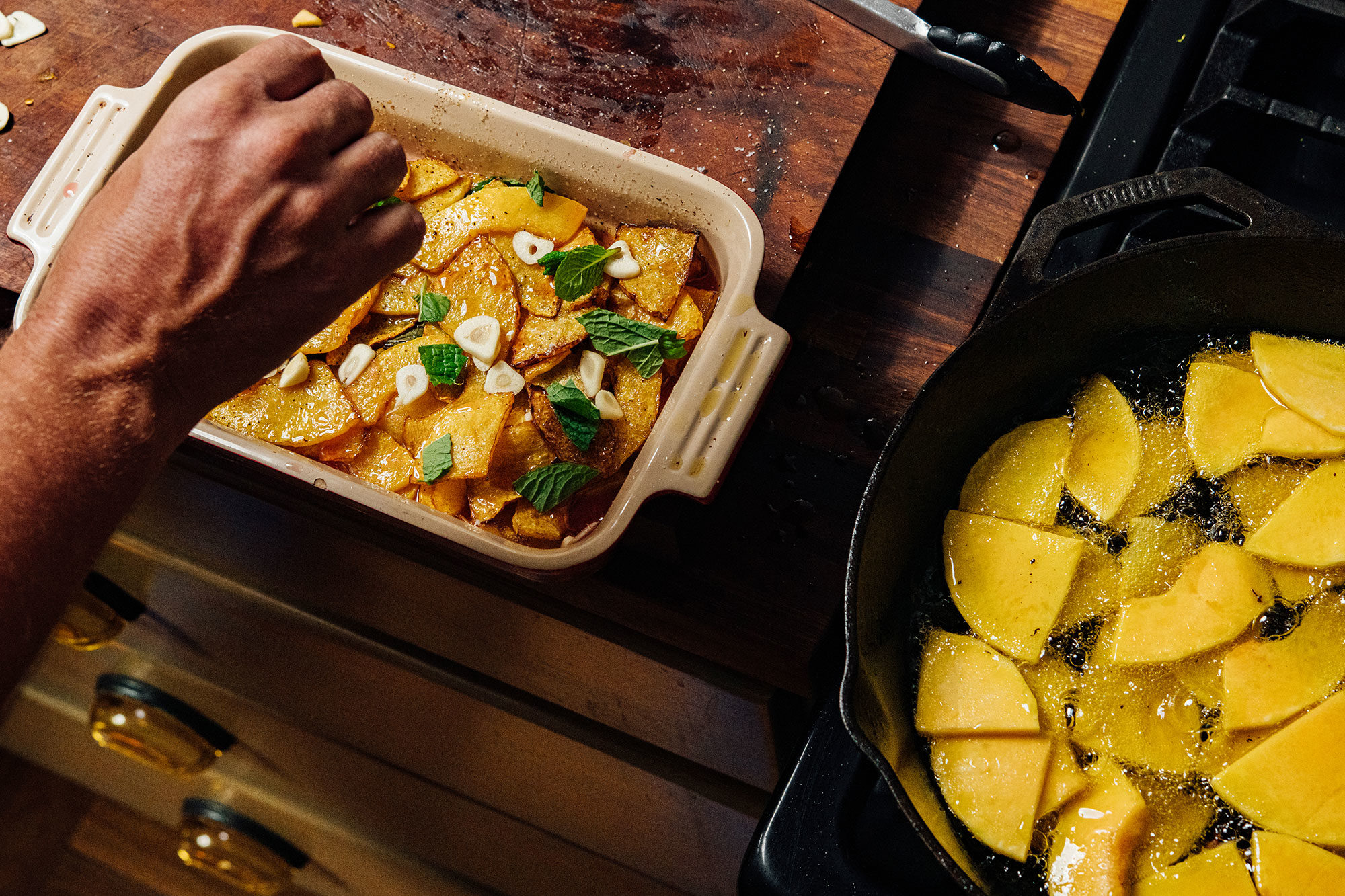 A few months ago, when the humid heft of our New Orleans summer was in full, sticky bloom, I sat at the counter of Gianna, a new Italian restaurant, and ordered a special dish of summer squash with chiles and mint. It tasted familiar, but the reason why was out of reach, like a bookmark dropped behind a headboard.

The chunks of zucchini and other summer squash varieties had been cut in myriad shapes. More surface area on the squash pieces led to more caramelization as they were panfried in olive oil. Brown, too, were the shards of sliced garlic added toward the end of the squash’s cooking time. Torn pieces of mint provided eager sharpness, as did fresh and dried chiles, as well as some kind of acidic element I could not parse. Vinegar, maybe? Somehow, the dish screamed southern Italy.

I later asked Gianna’s executive chef and partner, Rebecca Wilcomb, about the squash dish: how it is made, how it was born. “What southern Italy does so well is focus on one ingredient. We also do that here in south Louisiana,” she said. “In my own cooking, I use a lot of salt, olive oil, vinegar: all staples of southern Italy. Seasoned with the proper amount of salt and fat and acid, anything can be delicious.” I had unearthed that wayward bookmark. A couple years ago, during one of those infamous, hours-long boozy New Orleans lunches that turn Fridays higgledy-piggledy, Wilcomb and I discovered that we have a mutual veneration for the undersung 2010 book My Calabria. I asked Wilcomb knowingly if that squash dish had any connection to it. “Absolutely,” she replied with a chuckle. “That book has been super influential on my cooking. It plays into how I think about food—in every way.”

This is how influence works. Sometimes a dish, a technique, a fondness for an ingredient is handed down in a family. Sometimes a chef’s mentorship changes how one of her cooks thinks about food, and that cook opens her own restaurant, elaborating on her teacher’s perspective. Sometimes, as with Wilcomb and me, a cookbook cracks opens a window.

Wilcomb was raised on the flavors and ingredients of northern Italy. Her grandmother, born in the Veneto, prepared mostarda and giardiniera, and she cooked polenta and risotto. Then My Calabria showed Wilcomb a new way, revealing that “there are bigger, bolder flavors in Italy. Food that is simple but so satisfying—food that has balls.”

And so Wilcomb influenced me to return again to My Calabria, an authoritative beast of a book written nearly a decade ago by Rosetta Costantino, a woman raised in the Calabrian village of Verbicaro, who, in 1974, at the age of 14, immigrated with her family to the San Francisco Bay Area from the rugged southwestern Italian region.

During summers and autumns in Calabria, eggplants and tomatoes and squash are braised and baked and marinated. Then, as the days shorten, these vegetables are dried and preserved to endure until the next harvest. Costantino’s parents repeated the same ritual in their Oakland home, growing produce on a sea of hillside trellises.

Fall had struck in my hometown of New Orleans, the undiminished summer heat notwithstanding, and my peregrination through My Calabria had me eyeing winter squash—dense and gold-orange, rather than crisp and watery like the summer variety. Vinegar and mint and garlic and olive oil would be employed, as they were in Wilcomb’s dish. This squash, unlike Wilcomb’s, would be designed for eating over multiple meals, instead of in the moment. Costantino’s spartan zucca gialla con la menta—vinegar-marinated winter squash with mint and garlic—requires minimal ingredients. You peel a winter squash, such as butternut or kabocha, then cut it into large pieces and slice them thinly. You fry the squash pieces in extra-virgin olive oil in a shallow and wide skillet, until each side is lightly browned. Into a large serving dish they go, seasoned with salt and pepper, fresh mint, sliced raw garlic, and a light wash of red wine vinegar. Another batch of frying; another layering; another cycle of seasoning.

When all the squash has been amassed, you leave it either at room temperature for a few hours, or in the refrigerator for many. The squash moons and rings go soft and immingle with the mint, garlic, and vinegar: a consolidation and an amplifying. The dish is a fine accompaniment to a pork chop, a roast chicken, a broiled fish. I ate it for a few days as part of a motley assortment of impromptu lunches alongside stewed black beans.

It is startling how much can be done with so little.