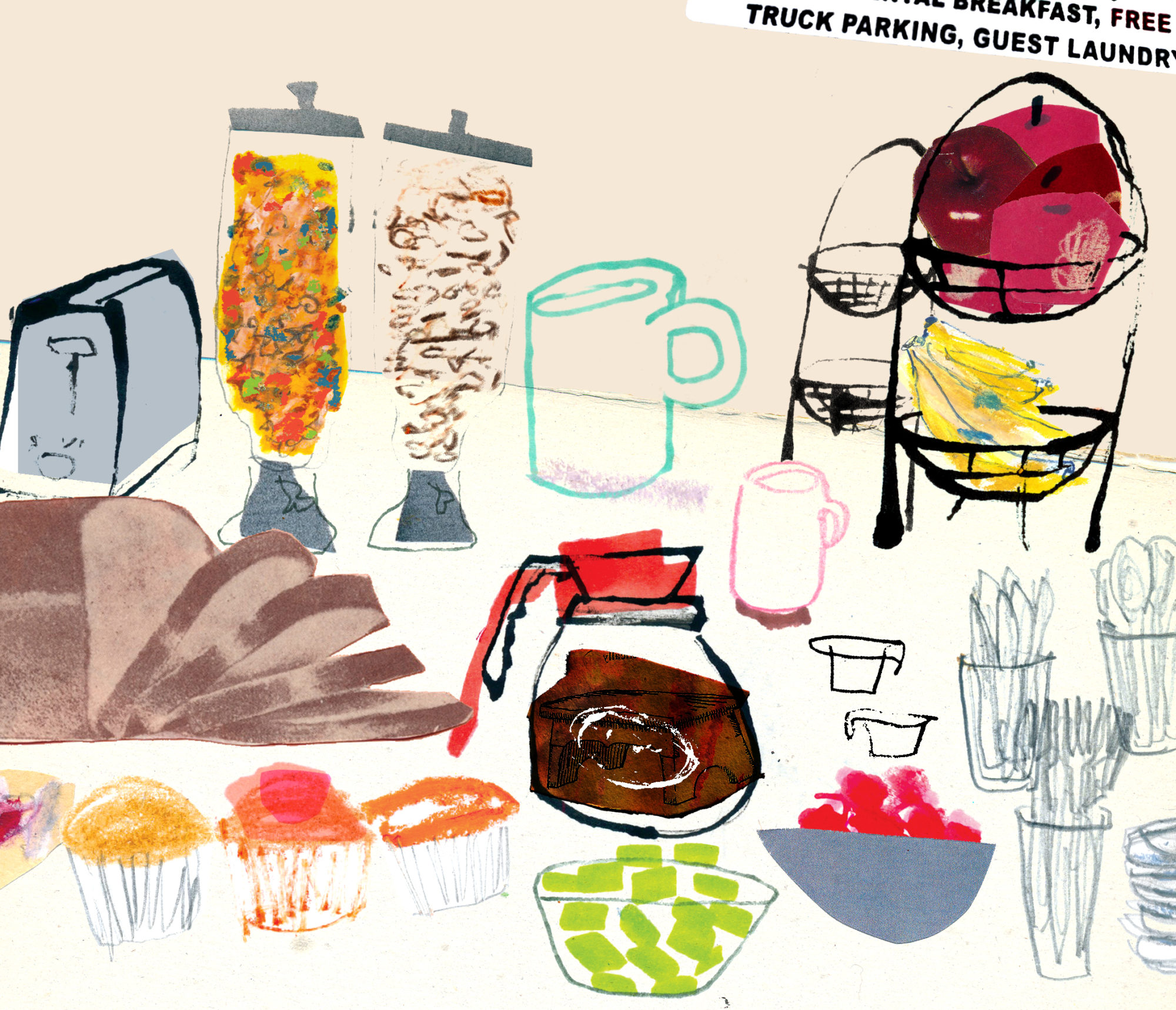 Sparked by a post-Victorian travel boom and a desire to feed travelers cheaply, the continental breakfast is a staple of hotel hospitality.

My favorite hotel billboards have always been the ones that are Spartan but informative—a block text checklist on a low-lit marquee. For example, near my brother’s house in North Carolina there is a sign that reads: “FREE HBO. NO WIFI. ENJOY AT $40/NIGHT.” Another in my hometown in Pennsylvania reads: “CABLE N AIR. WEEKLY RATES AVAIL.” I drive past all of these signs until I read the three words I love more than any other: “CONTINENTAL BREAKFAST HERE”

When I am searching online for hotels, “free breakfast” is the first box I check in filtering out hotel options. I don’t even usually eat breakfast at home, truth be told, but I love a continental breakfast. Perhaps it’s the comfort of knowing that my next meal will be accounted for, or maybe it’s just that I like Cheerios served in their own bowl a lot. But whatever the case may be, one thing is for certain: if there is coffee available in a six-ounce Styrofoam cup and a freshly unwrapped pastry in a plastic display case, I’m happy.

But to the main questions: What exactly is a continental breakfast? And what’s so continental about it? Today, a continental breakfast generally consists of a breakfast station in a hotel offering pastries, cereals, and fruit or yogurt—sometimes with some heated trays of pancakes, scrambled eggs, and sausages. While the term is ubiquitous in the American landscape of hospitality, one can trace its roots back about 150 years to England.

A traditional English breakfast is famously heavy, consisting of cooked sausages with their wrinkled skin, egg yolks broken over potatoes and soupy baked beans, and heavily buttered toast to sop up the last remaining bits. High in fat, carbohydrates, and sugar, a large breakfast of this type in the morning gave enough sustenance to last throughout a working day for an Englishman. But during the Victorian era, the working class shifted from hard labor to more relaxed, fairer trades. This meant that the working bodies could have smaller meals throughout the day, not needing to eat so heavily at morning and night. Another shift in breakfast attitudes came with the advent of commercialized ship travel and railroads. With these industries booming, tourism began to spread quickly. As travel became more accessible, costs dropped, and it was no longer reserved for the ultra-wealthy. And while rich tourists may have been more apt to dine out, more working-class folk chose to stay close to their hotels to save money. This meant hotels now had to begin thinking about their guests’ appetites for every meal, adapting breakfasts to their needs—even if it wasn’t the typical English cuisine.

The large meal at the beginning of the day just didn’t work for most French and Mediterranean palates. And as mentioned previously, it was working less and less for the modern English diet as well. By providing a set menu of democratically favorable options, hoteliers had a better chance of satisfying many, versus forcing guests to adhere to the English fry-up. And so British innkeepers adjusted their menus to the lighter choices, including pastry, fruit, and coffee. Thus, the “continental” in continental breakfast refers to Britain’s European neighbors and their preferred tastes.

Lucky for the hotel owners who serviced these European tourists, continental fare was cheaper and required less staff during the morning hours. Why pay staff to keep the kitchen running throughout a meal when you can lay out room-temperature baked goods and fruit for guests to grab at their leisure? Always looking to save a buck, hotel owners quickly began to advertise their breakfast offerings of continental fare, playing up the élégance of the French’s preference for a petit déjeuner.

This pared-down breakfast style caught on quickly and spread beyond the British Isles. With the uptick of transatlantic travel in the late 1800s, European eating habits found their way into the changing hospitality industry of America. While the continental craze of a smaller menu was favored by tourists, Americans at first were a little more ambivalent.

As one New Yorker notes in an 1896 Harper’s Weekly, “Hungry men have declined in numbers and influence, and European travel has had a depleting effect upon that fine old institution—breakfast.” But despite the lamenting American stomach, the continental breakfast made its way into the hotels of major cities and soon became a staple of American hotels.

Now, since the industrialization of postwar America and the extended shelf-life of most foods, most budget hotels offer some iteration of the classic continental breakfast. You, too, can enjoy the beauty of spongy Danishes and Froot Loops just like your ancestors did (more or less).

As one New Yorker notes in an 1896 Harper’s Weekly, “Hungry men have declined in numbers and influence, and European travel has had a depleting effect upon that fine old institution—breakfast.”

Recently, I spoke with the general manager of a Quality Inn outside of Pittsburgh, and it seems as though not much has changed since the advent of the continental breakfast for hotel managers. She indicated that her hotel’s mission, breakfast-wise, is to be as democratic as possible, offering a variety for all types of travelers, but so much variety that items go to waste. They have to think about loss prevention, too, when considering mobile items like granola bars or whole fruit. “It’s really a balancing act,” she said. “You have to think about being accommodating in the moment, but not so much that people walk out the door with their Tupperware filled up.”

Though a continental breakfast isn’t a separate line item, it is enveloped into the room rate. At this particular hotel, that means about $3 of the nightly price goes to the continental breakfast. This small expense to ensure a meal for a guest in the morning can have a major return on investment. A marketing coordinator at the corporate office of Quality Inn told me, “Hotels at our mid-range level aren’t necessarily about quality—they’re about quantity. And what’s going to get the most people in the door other than low prices and some free food?”

And she’s right. In the competitive hospitality industry, a lot of a hotel’s favorability comes down to price. Ordering well means having less waste. Having less waste means room rates stay low to avoid having to absorb further costs. Having low rates means more favorability to the consumer. To ensure this balance, a GM orders on a monthly basis by looking at the manifest, projecting guest numbers, and deciding what and how much to order. If a lot of families will be staying one month, they’ll order more cereal and milk; if it’s a few business travelers, it may be fruits, breads, and coffee on the order.

What was once a subtle shift in menu options in England has become threaded into the fabric of American hospitality and the precarious nature of price wars among competing hotels. But at its heart, the continental breakfast is a humble ode to the unpretentious. Whether a hotel is two stars in Pittsburgh or  four stars in Raleigh, typical menus include a variety of cereals, milks in steel pitchers (the labels usually handwritten with 2% or skim), pastries that are just unwrapped so the faint taste of cellophane still lingers on your tongue, and a blend of fresh and canned fruit contained under a sneeze guard.

For me, the continental breakfast has always been described as the standard of hospitality. Being able to sleep in and not have to go off-property for breakfast means I get to spend my vacation at my leisure. Sorry, but without the promise of unlimited stale coffee in the hotel lobby from 7:00 am to 10:00 am with 50 other strangers, it just doesn’t feel like a vacation to me. And maybe it’s not the most American thing about hotel tourism (I’m looking at you, Gideon Bibles), or the most glamorous (I’m looking at you, hot tubs), but planning the day ahead with my partner over a cup of coffee and a Styrofoam plate of fruit cocktail is usually the best part of the trip, in my opinion.

Brett F. Braley is the writer, baker, and photographer behind FigandBleu.com (@figandbleu). His work centers on traditional American desserts, combined with new flavors or techniques.