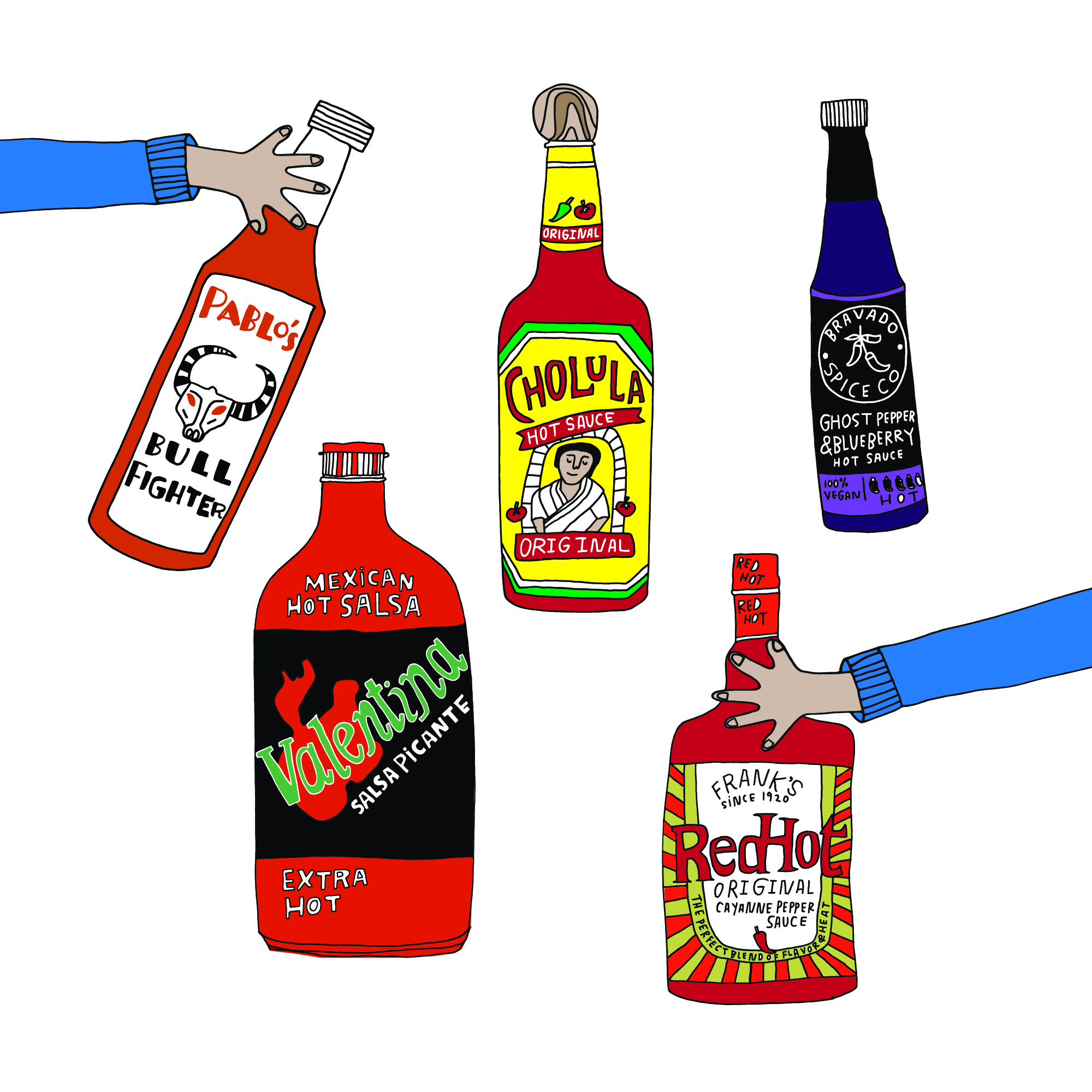 I got hot sauce in my bag—and my pantry, my fridge, my pockets, my sock drawer, my blood. Swag.

Down in the dim, tight basement of Jimmy’s No. 43—an East Village ratskeller known for its beer list, its above-average pub food, and its exuberant owner—I was floating. For more than four hours, I had been sampling hot sauces as a judge for the Screaming Mimi Awards, held each year as part of the NYC Hot Sauce Expo, a convention devoted to liquid fire in all its lovely, tasty forms. The evening had begun with the milder categories—dozens of lower-temp barbecue sauces, wing sauces, chipotle-based sauces—each of which the 30 or so judges tasted blind, on a tiny plastic spoon, and assigned scores based on appearance, texture, flavor, and use of heat. Easy.

But then we’d moved on to the challenges: habanero sauces, fruit-based sauces (hot), and finally ultrahots, those sauces containing ghost peppers, Trinidad Scorpions, 7 Pots, and Carolina Reapers, whose 1.5 million Scoville unit score won it the Guinness World Record for spiciest chile on earth. Each of those categories included dozens of sauces, and I’d paced myself as best I could, snacking on sliders and sipping beer and hoping the next sauce wouldn’t suddenly blow out my palate, rendering me unable to taste a thing.

And it worked! By 10 p.m., I was floating—surfing, almost. I was riding a wave of fire in my mouth, every nerve alert and sensitized to every single flavor, lime and tomatillo and garlic and tequila and blackberry. Each new dot of sauce ratcheted up the intensity, and yet still I rode the wave, higher and higher, the crest just barely under my control—a blowout looming if I tasted too much or simply inhaled wrong. But how much higher could I go? This was more than orgasmic—it was tantric, a capsaicin-fueled communion with ancient spirits of pleasure and pain.

And then it was over. We judges who’d stuck it out all the way—a dozen at most—finished tasting everything, drained our beers and glasses of milk (the near-mythic antidote for chile heat), and walked out into the East Village night, the lingual buzz slackening and softening until, by the time I climbed into bed in Brooklyn, it was just a memory.

If it’s not clear by now, I like hot stuff. In fact, I’ve liked hot stuff since the mid-1980s, when, as a nine-year-old, I bit into a cherry pepper at the farmers’ market in Amherst, Massachusetts, felt my mouth explode, and—somehow—survived. Luckily, I grew up in a family that embraced spicy food. My parents not only took me and my younger siblings out for Indian, Chinese, and Thai but cooked it well at home, and kept Melinda’s and Tiger hot sauces in the pantry. It wasn’t until I was an adult, though, and roaming the world as a travel writer, that my obsession truly began to emerge.

Country by country, I began to collect spicy flavors. In the markets of Turkey, China, India, Mexico, Kenya, and Israel, I bought so many bags of dried chiles that they took over an entire shelf of my pantry back in Brooklyn. In Tunisia and Morocco, I hunted for tubs of harissa, and across the Caribbean I shopped for pepper sauces in reused Lucozade bottles, and everywhere I crossed my fingers that the containers would not explode in my luggage. At home, the hot sauces—including those I’d made myself—took over what little space was left, both in the pantry and in the fridge.

This was heaven. Whatever kind of food I was cooking, I had a sauce to go with it. For Chinese dumplings, I’d spike black vinegar with a thick Sriracha-style paste, or maybe a Sichuan chile oil. For lamb, I’d blend yogurt with harissa and preserved lemon. Steaks could take just about anything, from a mustardy Scotch Bonnet sauce to the incredible chipotle sauce that Sean Evans, the host of Hot Ones, developed for Heatonist, the Brooklyn hot sauce boutique. When I started cooking carnitas regularly, though, I was stymied—nothing I owned matched up to it perfectly. So I did what I had to: I made my own sauce, based on grapefruit, rice vinegar, and a host of highly aromatic yellow and green peppers, like fatalii, wiri wiri, and pimenta de cheiro.

In Tunisia and Morocco, I hunted for tubs of harissa, and across the Caribbean I shopped for pepper sauces in reused Lucozade bottles.

There’s a magic that happens when you get this just right—when a dish that is properly done in its own right meets a sauce that elevates it, not just with complementary flavors but with a heat that lets you taste it anew. Of course, I tend to like that taste on the hotter side of hot, but I try never to overdo it. (My wife might argue otherwise.) For one thing, I’m conscious that a blowout is always possible; for another, I’ve eaten enough of the world’s most powerful chiles that I no longer have anything to prove. And some sauces are so delicious that I don’t care whether they’re mild or fiery. Brooklyn’s Queen Majesty uses habanero and Scotch Bonnets, but she’s got such a way with flavor, deploying coffee or tequila in her sauces, that I pretty much want to drink them straight. Meanwhile, a salsa verde like Garden State Green, from Jersey Barnfire, is so bright and wonderful that when the Screaming Mimi judges tasted it this spring, we instantly knew it was a winner, even if it had only a spark of heat.

To be a hot sauce junkie, though, is to be highly conscious of the evolution of your own tastes. I started with Melinda’s and Tiger, I passed through a long and serious Sriracha phase, and for a time I wanted to blast my face off with Reaper juice. Each point in that process was an exciting novelty at the time—how cool was it to be the guy at the office whose desk was crowded with hot sauce bottles, back when that was weird and new?—but each was also superseded by the next phase. Was I chasing trends? Or on the forefront of them?

Maybe it’s this: Those of us who love chiles are by definition thrill seekers, chasing after the flaming shock of the new, and, well, the new never stays new for long. Our tastes may be extreme, our highs higher than most, and the prospect of life without our precious is terrifying. It takes supreme effort to look back across the sauces, the dishes, and the dizzying varietals we’ve consumed and pick out the ones that continue to burn brightly, illuminating the way toward a fierier, more flavorful future, for the fire inside never dies.