Get a free recipe
Subscribe
Comfort Me With Popovers
By: Priya Krishna Illustrations: Vance Lump 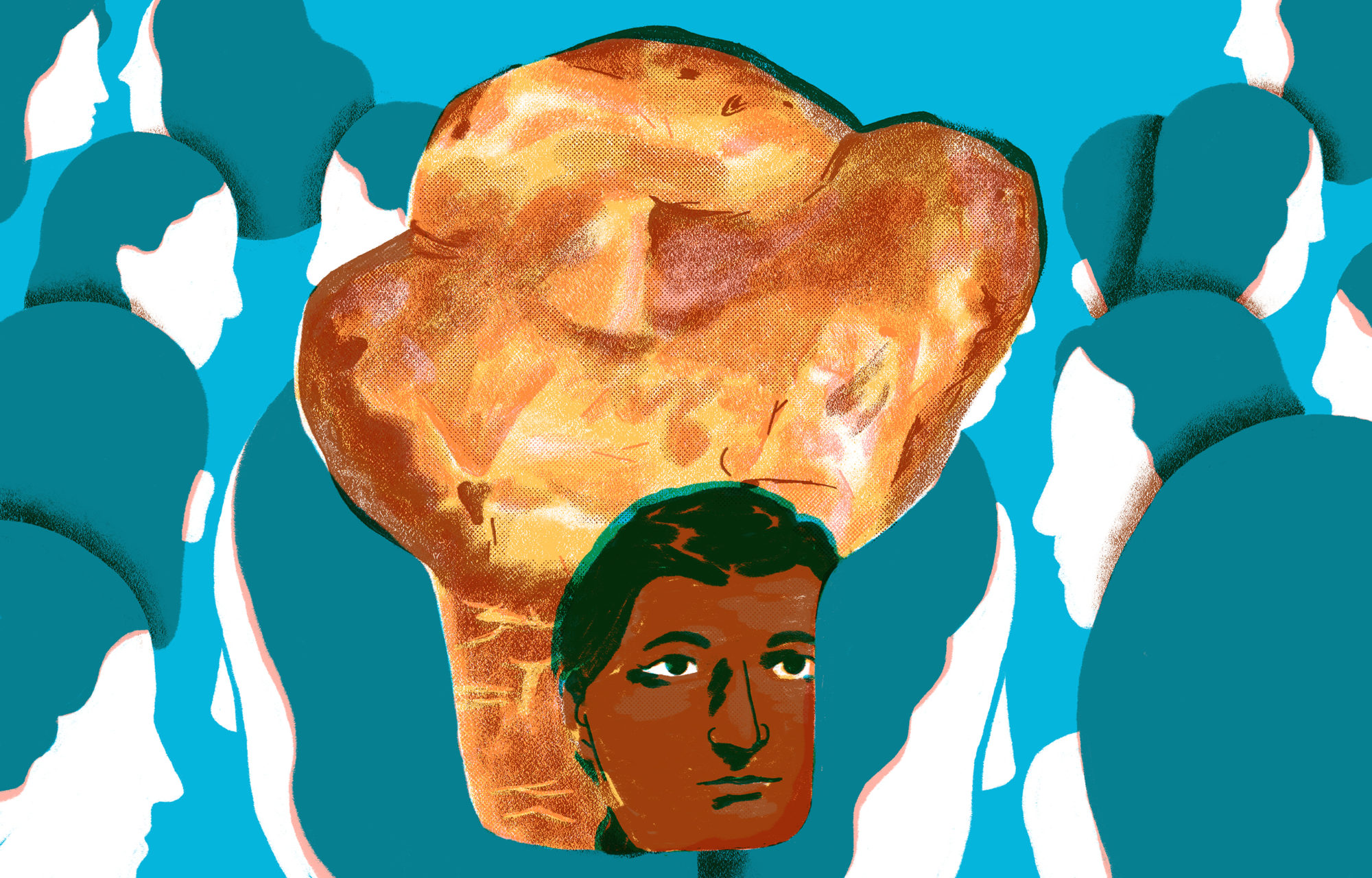 Sometimes a very good pastry is the only bridge between cultural alienation and a place of comfort.

In 1907, the very first location of the luxury department store Neiman Marcus opened its doors in downtown Dallas. In 1953, the store introduced its very first restaurant, the Zodiac Room, a white-tablecloth place with Tiffany-blue walls and bespoke flower arrangements. In 2004, I attended my first Neiman Marcus birthday party.

When I tell people about Neiman Marcus birthday parties, they are often confused. The vast majority, it turns out, don’t know that there are restaurants inside Neiman Marcus (and why would they?), nor that it’s possible to host a party there.

But within my liberal Dallas private school, where 90 percent of the class was white and very wealthy, everyone knew that having your birthday party at Neiman’s was the ultimate status symbol—a way of showing the rest of your friends that you were cool and fancy and could afford things like Juicy Couture sweatsuits and crystal-studded 7 for All Mankind A Pocket jeans, both of which Neiman’s sold by the gross.

During the week, the Zodiac at the downtown Dallas Neiman Marcus was a destination for ladies who lunch and other subsets of the city’s moneyed, fashion-forward elite — the ones willing to pony up for $22 tacos and an $83 pitcher of Chambord sangria. At the weekend, however, it became a playground for image-conscious middle and high school girls clad in Lacoste tennis dresses. They’d eat Caesar salads, drink orange juice out of champagne glasses, and gab extremely loudly.

My first Neiman Marcus birthday party was in middle school. I was shocked to be invited, and certain it was one of those things where the parents made the kid invite all of the girls in the class so no one would feel left out. I had never stepped foot in a Neiman Marcus before, much less a Neiman Marcus restaurant. I remember wandering aimlessly around the store for 20 minutes, then showing up at the Zodiac dressed in a checkered shirt and jeans, my hair in a messy bun. Everyone else was wearing some variation of a pastel-colored dress, their hair perfectly straightened. Was there some kind of memo that everyone got except me?

We were served salmon that was dry as a bone, bistro salads that tasted like trail mix, and sugar cookies whose texture perfectly matched that of sawdust. I had all but given up on eating anything when the popovers with strawberry butter arrived. Since 1955, Neiman Marcus has served homemade popovers with strawberry butter at each of its in-store restaurants. The dish was born of cofounder Stanley Marcus’s desire to feed people something delicious while they waited in line for a table at the Zodiac. Helen Corbitt, Neiman’s legendary director of restaurants, came up with the idea of a popover, as the light, fluffy bread had just a few ingredients (butter, flour, salt, eggs, and milk) and was easy to bake. She served hers with strawberry butter, which was itself the product of an inspired decision to add strawberry preserves to whisked butter. To this day, the popovers are made fresh throughout lunch service and go straight to the table from the oven. They’re one of a number of iconic baked goods and desserts that Neiman Marcus restaurants have developed over the years, like a chewy oatmeal chocolate chip cookie whose recipe allegedly used to cost $250 (spoiler alert: the secret is ground oats) and a silky, retro mandarin orange soufflé.

Before that birthday party, I had never heard of a popover. But I could smell them as soon as they arrived in the dining room—the ethereal, buttery scent of toasty white bread filled the entire space. They looked like overgrown muffins and were light as a quarter. I slathered some strawberry butter on one and took a bite. It tasted like well-whipped air; as each tuft of bread disappeared in my mouth, the fruited butter left behind a slick tartness on my tongue. While everyone else at the table gossiped about who had a boyfriend and recapped what happened on last week’s episode of The O.C., I quietly housed a basket of popovers while playing a game of Snake on my Motorola flip phone.

My late middle school to early high school years were filled with Neiman Marcus birthday parties. And my routine was always the same: Skip the limp salads and flavorless fried things and proceed straight to the popovers with strawberry butter. (Also: Straighten hair; wear that one Anthropologie dress; leave early, if possible.)

Don’t get me wrong: I was not a total hermit. I had friends—who I liked! But outside of school, many of them existed in this whitewashed bubble that I neither understood nor had access to. My mom dressed me in lenghas, a type of formal Indian skirt, not Lilly Pulitzer dresses. My family went out for dosa on the weekend, not brunch at a department store. I still have a hard time shopping at Neiman Marcus because from the skinny white ladies on the posters to the wealthy, bejeweled housewives browsing the shoe department, the place feels so clearly not meant for me.

But somehow, those popovers were always a security blanket—they were the only way I enjoyed those birthday parties, and the only things that made that world feel remotely appealing to me. They were a singular source of comfort in a sea of discomfort.

A few weekends ago, a good friend from high school hosted her bridal shower at the restaurant atop Bergdorf Goodman in New York. I absolutely adore this friend, but I couldn’t help but feel an eerie sense of déjà vu: I got lost in Bergdorf’s trying to find the restaurant, I was wearing a skirt that was decidedly not designer, and I was the only person in the room who was not white.

Worst of all: Bergdorf’s does not even serve popovers.