Get a free recipe
Subscribe
Comfort Me With an Assembly Line of Dumplings
By: Scott Hocker Photos: Denny Culbert 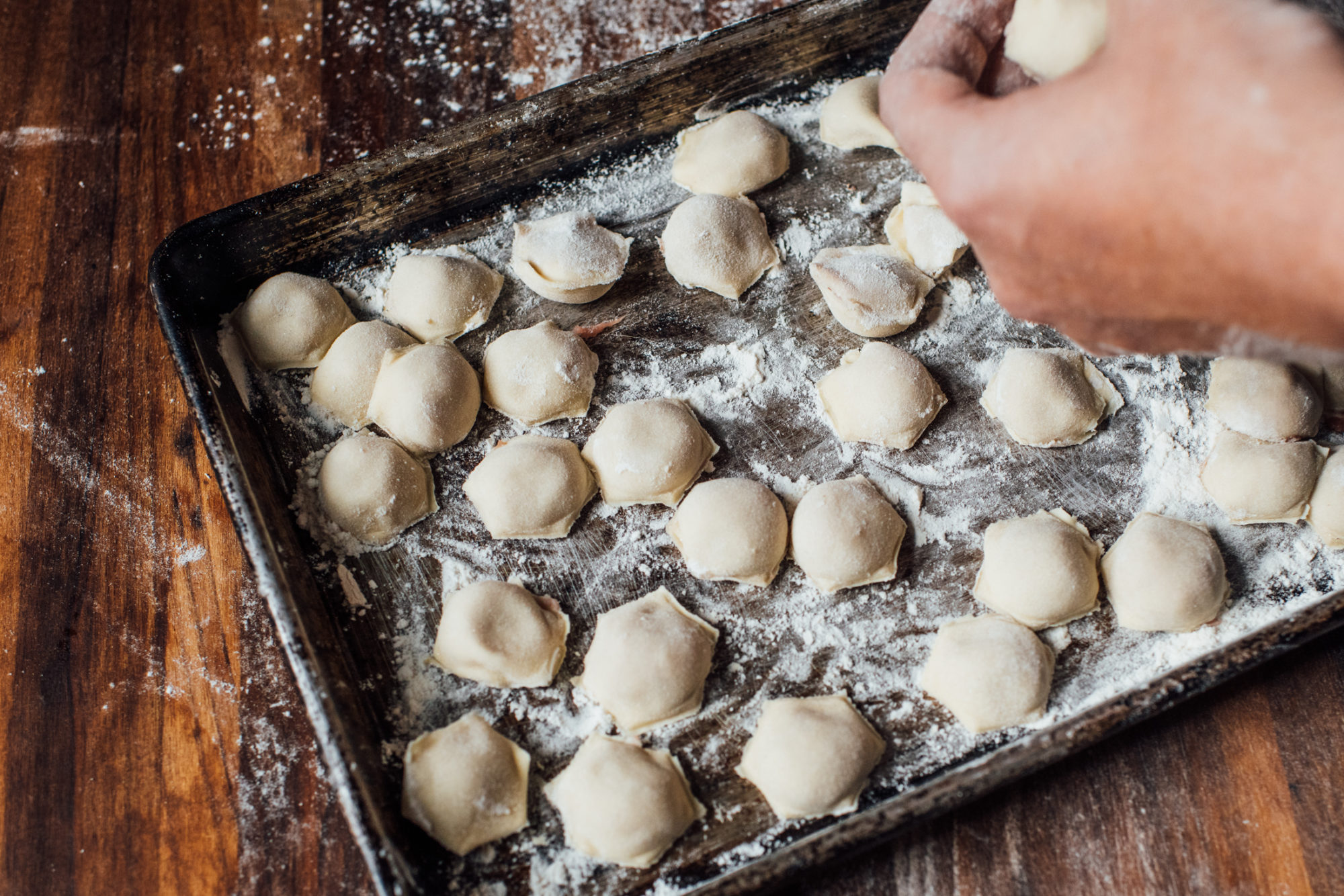 There’s no cure for heartbreak. But Soviet mechanical efficiency and endless pelmeni do help. Some.

When you have been eating and cooking and hoarding cookbooks for years and fumbling with what it means to be human for far longer, surprise becomes as familiar as breath. Then you learn once again: You do not know all the things you do not know.

Still. Your world can be upended in ways you did not, could not fathom. The surfacing of a pragmatic, utilitarian aluminum mold. The slackening of a 10-year relationship.

First, the metal. Here in New Orleans, Stephen Torres, the founder of the food nonprofit Bill of Fare, hosts regular dinner salons at his Uptown home. He brings in notable chefs, like Daniela Soto-Innes, of the Manhattan haute Mexican restaurants Cosme and Atla, and José Enrique of the restaurant in San Juan, Puerto Rico, by the same name. The cost for entry is a donation to the chef’s chosen charity. The guests are always a ramshackle collection of chefs and food people and general yahoos, like myself. The dinners are lively: convivial, boozy, raucous, and Southern in the peculiar way those four elements intertwine in New Orleans. Last fall, in honor of the release of her debut cookbook, Kachka: A Return to Russian Cooking, Bonnie Frumkin Morales cooked. Morales’s food is a little Russian, a little American, and very Soviet and Belarusian, an homage to the region where her parents were born before emigrating to the United States in 1980. Lots of preserved fish, like pickled herring in a fur coat and pickles and beets and potatoes and lots and lots of cultured sour cream. I have been to Kachka, her Portland, Oregon, restaurant, two times. If I lived in Portland, I would eat there all the time. My boyfriend jokes that I have an Eastern European or Soviet woman living inside me.

Make that ex-boyfriend. A few months ago, Brandon moved out—and on—after three cities and 10 years. For the last year or so, we had been making dumplings by hand together. Sitting abreast at our kitchen table as we loaded pork-ginger filling into packaged wonton wrappers and folded them into triangles and overlapped two of the tips to form small bundles. Into the freezer they went, ready for an emergency meal. A late-night drunk belly-filler. A hungover low-touch snack. Comfort food for any occasion. At her dinner in New Orleans, Morales began the meal by serving an array of zakuski, cold appetizers served family style. The table seated at least 20 people and was full. The zakuski were merely the first round of dishes. Out came huge bowl after huge bowl of pelmeni, tiny handmade Siberian dumplings filled with an austere mixture of veal, pork, and beef and grated onion and topped with sour cream and herbs. As the bowls thudded onto the table, Morales began waving what looked like a hexagonal cross-section of an aluminum honeycomb. I began to eat what added up to probably 100 pelmeni. You give me access to unlimited dumplings and I will do more than my part. A pelmenitsa, she called it, a model of Soviet efficiency with adjacent hexagon-framed holes stamped into seven tight rows, all designed to facilitate the maximum amount of dumplings with minimal work.

Brandon said he needed to be uncomfortable. It has been two months, more or less, and the world feels both the entire same and wholly different. There is no acrimony. I would not want that. Love is not finite. It abides, unlike our—my—dumpling freezer stash. I ran out of frozen dumplings in the weeks after he left. I ordered my own pelmenitsa online after Morales’s Russian-inspired feast. Immediately. A pelmenitsa works like this: There are 37 holes, its bottom has short legs, and the top edges of the holes are ridged. A pelmenitsa looks like a pock-marked trivet. You set it on a counter, then lay a round of rolled-out homemade dough over it. Using a piping bag or spoon, nubbins of filling are placed on each of the thirty-seven indents where the holes were. Another dough round is laid on top, water is sprayed lightly to help prevent sticking, then, employing a rolling pin, you forcefully roll over the top dough layer and entire mold to merge the top and bottom layers and separate the individual dumplings. If all goes according to plan, when you flip the mold over and gently shake, the dumplings employ gravity to become their finest individual selves.

I started playing in a dumpling sandbox. I made classic pelmeni, boiled them, then tossed them, as Morales instructs in her superb book, with butter and a touch of vinegar, then plopped sour cream on them and added chopped celery leaves for a green lift. For a different effect, I used the same filling and slicked the cooked dumplings in a Sichuan-style sauce of spiced soy sauce, chile oil, garlic, and scallion greens. The dumpling-making was effortless, so I again started accumulating dumplings in my freezer. I had always wondered if my and Brandon’s relationship would shift or morph or collapse or transfigure. I knew it was inevitable that some version of one of those would happen. Because that is what intimate relationships do. The only inexorability is forward motion. Difference. Change. Having a pelmenitsa and an accruing stockpile of frozen dumplings stops time. Their availability helps mollify the rending, the ache, the pained resetting. The frozen dumplings also confer time. In the hours when I cannot bear to give more time to cooking than it takes to boil water, there they are. An icy fistful away, ready.