Get a free recipe
Subscribe
Colonialism in a Can
By: Elaine Castillo Illustrations: Kellen Hatanaka 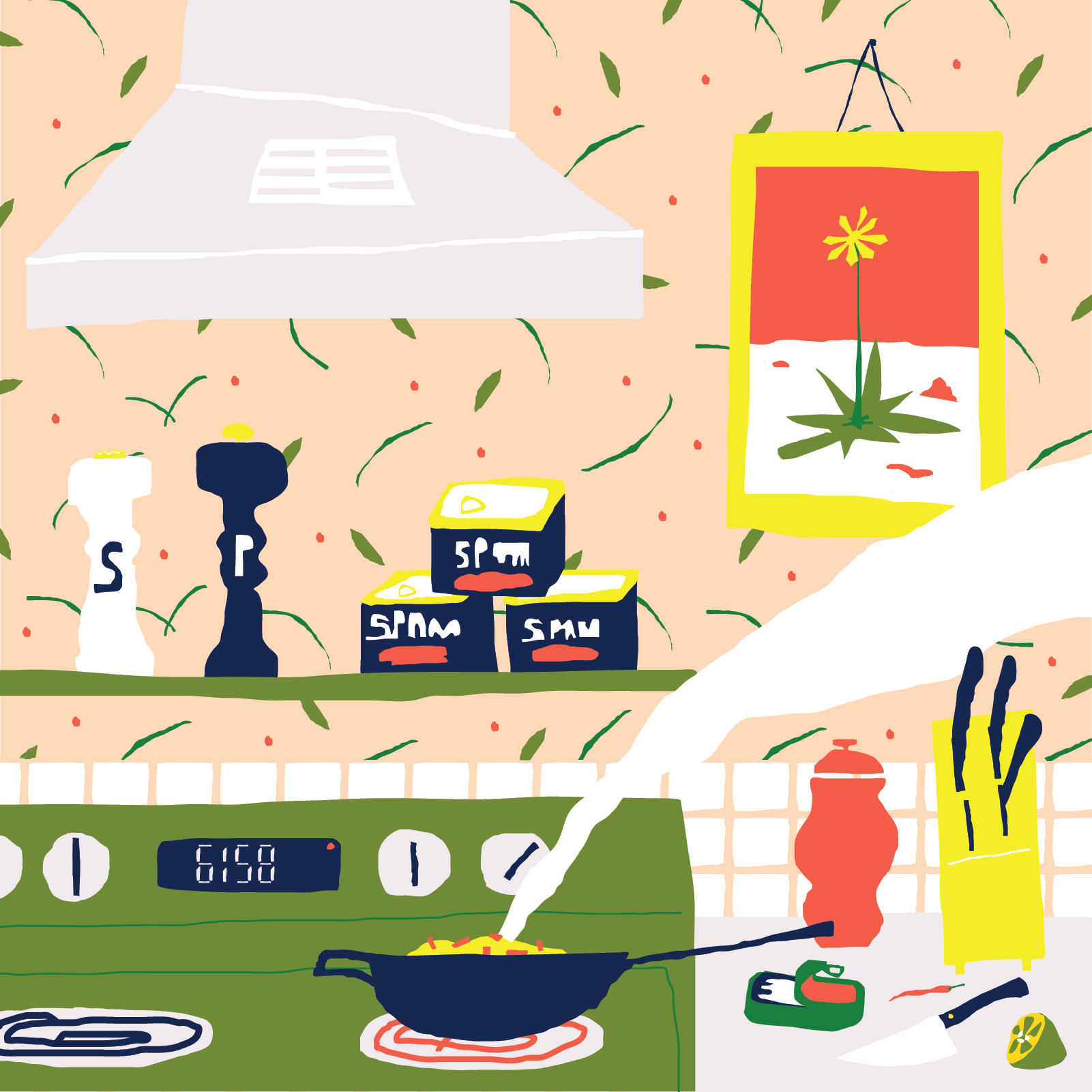 There’s a shame-free exuberance and practicality in the Filipino transformation of canned food—even as it harkens back to America’s checkered occupation of the Philippines.

It’s hard for me to go a week without eating something out of a can. Growing up a Filipina-American kid in the Bay Area, I ate canned food pretty much every day: There was canned corned beef, a viscera-red slab marbled with fat, served cold and sliced over day-old rice. This was my preferred way of eating it, in contrast to my family members who more sensibly fried the beef in onions (because they are decent). There were canned Vienna sausages, stubby little fingers packed in a transparent savory jelly, which my parents liked to use as rice seasoning and which I had to rinse off before even contemplating them (because I am decent).

In London, a city I’m about to leave after having lived there for the better part of a decade, you can’t procure the prized Ligo sardines of the Philippines—a staple of my family’s kitchen cupboard—not unless you make the trek all the way to the Filipino stores in Earl’s Court, West London. But I’m all the way in southeast London, so I mostly take the cheapest brand of supermarket sardines and, like most immigrants, I make do: You can’t make something, so you do something; you can’t do something, so you make something.

If, like me, you were born the kid of immigrants, you’ve probably been asked about food. That goes doubly so if, also like me, you’re a novelist who has found that food appears, again and again, in your sentences. I didn’t really realize that I wrote about food so much until other people started mentioning it; it hadn’t occurred to me that describing what people eat would be in any way noteworthy. But the practice of writing about food takes on additional resonance when you happen to be a person of color and the daughter of immigrants. You start getting asked some very simple, very weird questions. Things like: What are some of your national dishes? How does food illuminate your culture? What are some of the traditions associated with your culture’s foods? What do dishes symbolize in your community?

Food becomes a stand-in for anything resembling structural equality or representation: You might eat Southeast Asian food weekly without ever really being confronted with the realities of Southeast Asian lives.

I get it. Food’s usually one of the first things to be used as a kind of cultural shorthand or gateway, and even more so when those cultures happen to be marginalized within a given society. A community might have minimal institutional power, but hey, at least there’s adobo. Food becomes a stand-in for anything resembling structural equality or representation: You might eat Southeast Asian food weekly without ever really being confronted with the realities of Southeast Asian lives, and because food can so easily become disembodied from any nuanced understanding of its history or the power dynamics that bring a dish to a table, your ordinary dish of adobo and rice has to compete in a kind of culinary beauty pageant, just to justify its relevance.

I love, ferociously, the food I ate growing up, and the idea of not writing about it would be unthinkable. But I’m not really all that interested in food as something uniquely delicious or representative. I’m interested in food that’s embedded in daily life; food as just another part of the texture of a world, bearing indelibly but mundanely the living traces of history.

Most people, when they ask me about Filipino food, want to know about lumpia, pancit, adobo. If you write an article about Filipino food, you’re almost obliged to mention things like banana leaves, purple yams, sticky rice, all of which are products I do eat weekly—I have no desire to minimize their importance in Filipino cuisine, or their profound meaning in the lives of Filipinx eaters like me. But I also know that often the emphasis on those ingredients means imposing a particular view of Filipino cuisine whose primary purpose is to bring non-Filipino diners news from afar, fairytales from a far-off and fragrant place.

But why not ask about canned sardines? You can follow them back to the American imperial presence in the Philippines at the turn of the 20th century, when a steady supply of American canned goods was sent to colonial personnel, who were wary of the contaminative effects of eating native food, not to mention the contaminative effects of the people themselves. But Americans took care of that with stringent hygiene—and failing that, genocide. Cautious estimates by American historians place the number of Filipinos killed by American colonial forces during the Philippine-American War—which took place between 1899 and 1902—at around 600,000 deaths in Luzon and Batangas alone; that figure is almost certainly a vast underestimation. One such American was Edith Moses, the wife of one of the officials tasked with creating a legislative, executive, and judicial system in the American-controlled Philippines. Moses was also author of that dubious gift to Filipinx-American writers everywhere: Unofficial Letters of an Official’s Life, a book that, more than a century after its publication, remains politically illuminating in the poisonous way of rich white ladies talking about their semester abroad.

In her letters, Moses describes the difficulties of domestic life in the colony, not least of which was the reliance on canned food: “It is no easy task to entertain…with inefficient servants, and the harassing question of getting something new to eat in a place where tinned milk and canned goods form one’s chief supply for dinner parties.” Her troubles are grave indeed:

We hosed off the ‘China’ boys and Filipinos with disinfectants, and I made their eyes stick out with fright by describing a cholera germ…We are doing many things just now that seem like overprecaution. Of course, we eat only tinned vegetables and well-done meats, but in addition, we toast all the bread, heat all the plates, and scald all the glasses before every meal. We open a fresh tin of cream each meal, and have concluded to buy tinned butter. The water is distilled, and the bottles in which we keep it sterilized. This means continuous oversight, and at night I am so tired that I have no time to let my imagination run riot.

Moses is domestic goddess as master, civilizer, and hostess all at once; despite the apparent hairshirt of her circumstances, she somehow Nigellas her way through the white woman’s burden. Of a dinner at the wealthy Filipino Don Severino’s home, she wrote, “I confess my interest was aroused, and you may imagine our amusement when a tin of canned corn was passed with powdered sugar. I was able to recover in time to help myself liberally.”

During Moses’s sojourn in the Philippines, only elite households like Don Severino’s would have had access to canned goods, items that represented a necessary evil for American colonials but offered exotic, cosmopolitan luxury to the wealthy Filipinos who could obtain them. Moses’s description of her host’s dinner table resembles that of someone watching a dog doing a trick in human clothes: a cute attempt at civilization.

Americans relied on canned food despite their disdain of it, but that reliance did nothing to curb their patronizing reaction to the way upper-class Filipinos took those cans and served the contents right back to their colonizers, with brio.

There’s a fundamental difference between the way in which Americans like Moses and Filipinos like Don Severino—and later, Filipinos of all classes, including my own family members—approached canned food. Americans relied on canned food despite their disdain of it, but that reliance did nothing to curb their patronizing reaction to the way upper-class Filipinos took those cans and served the contents right back to their colonizers, with brio. The shame-free exuberance and practicality in the Filipino transformation of canned food is utterly missing from Moses’s meals. The way Filipinos took on canned food ended up appropriating, embellishing, and then ultimately normalizing—indeed, nativizing—an unloved, utilitarian piece of colonial kit, not unlike the leftover World War II military jeeps in the Philippines that have since been transformed into ornate jeepneys. The most widely used—and photographed—means of public transportation in the Philippines, they are deeply functional and weighted with history but also sly, stylish, and, in the end, mundane.

When Americans thought they were slumming it by eating corn out of cans, Filipinos found a way to frost the corn in sugar. When Americans left behind their shit, Filipinos turned that shit into sustenance and celebration—and Spamsilog, a portmanteau for that much-loved Filipino breakfast combo of sinangag (garlic fried rice), itlog (egg) and, yes, Spam.

Once, I heard someone dismiss a certain type of literary writing, usually featured in novels about immigrant communities, that they characterized as exoticization: “going on about mangoes all the time…” And sure, it’s true: There can be an unmistakable whiff of exoticizing, even self-exoticizing, in literary depictions of food. But the category of the exotic is also a question of perspective. When we think about Filipino food, we don’t often think about canned corned beef; it’s easier and more romantic to think only of those dishes that telegraph foreignness—otherness—rather than the plates that reveal a history that hits a little too close to home. Suman wrapped in banana leaves, rather than sardines tinned in tomato sauce.

Every can in my family’s house contains the colonial history between America and the Philippines. But truth be told, more often than not, the history around us is not always instructive or illuminating. It’s just…there. We eat and work and live every day, wrapped up in that compressed, preserved detail. But when the food a community eats happens not to align with our dominant images of the American dinner table (or, for that matter, the immigrant’s dinner table), that food often ends up being burdened with the responsibilities of representation: Suspend the tableau in aspic; ask what it means.

But the possibility that some dish might be considered exotic, illuminating, or symbolic by those who do not regularly eat it does not make it so. If mangoes are exotic simply because families like mine eat them, then by that logic canned food has to be exotic, too. Unless, of course, we accept that it’s not by selectively framing and fetishizing certain differences that we get to know the relationship between food and the people who eat it. It’s not even by asking, “What are some of your national dishes?” or “How does food illuminate your culture?”  It’s not by making every bite of food a symbol, an act of representation. It’s by asking, very simply: “What do you eat?”

Because when we write about food, it’s important to remember that people, writers, characters—they also have the right to the sufficiency of their own banalities: Here is someone who is hungry. Here is what they eat.

Elaine Castillo is the author of America Is Not the Heart.