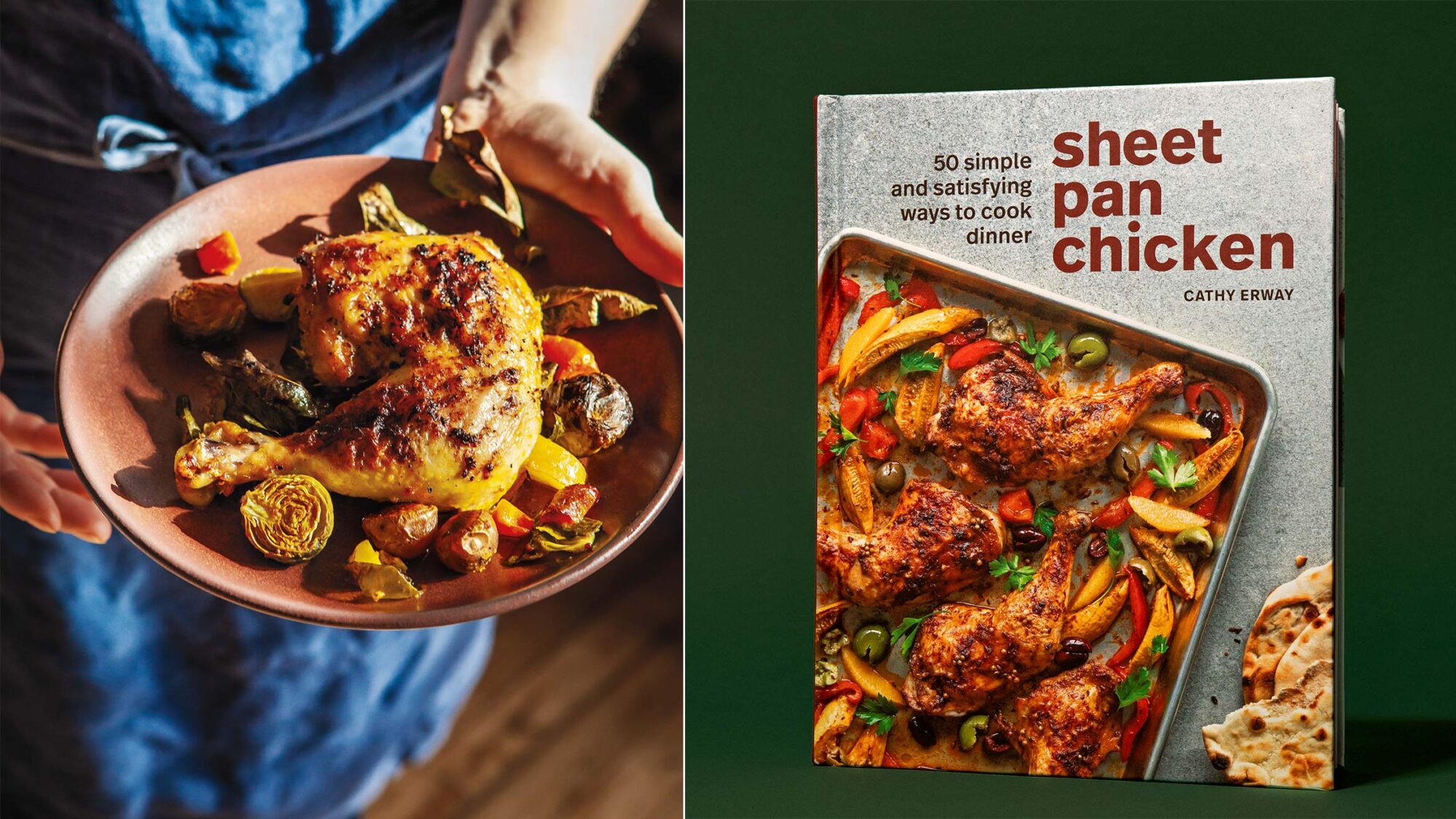 A new cookbook offers 50 ways to rethink those legs, thighs, and whole birds.

There’s a reason why sheet pan dinners have become the modus operandi for a generation of home cooks. Sure, they might require the steel-wool scouring pad now and then, and nobody said that the casserole, the sheet pan dinner’s deeper, squishier cousin, was lacking in charms—but popping a rimmed sheet pan in the oven with all (or most) of your meal’s components on it appeals to the efficiency seeker in all of us. And unlike a casserole dish or the coveted cast-iron pan, a sheet pan gives you plenty of surface area to spread out your ingredients, so they spill their juices and evaporate faster, concentrating in flavor while browning across the surface and crisping on the bottom. That all happens while you’re doing something else, of course—the beauty of sheet pan cooking is that you don’t need to pay close attention. Set it and forget it, as they say. When I was asked to write a book about sheet pan chicken by the editors of TASTE—Sheet Pan Chicken, which was released this week by Ten Speed Press—I immediately started making a list of all my favorite dishes that I wanted to recreate for the sheet pan. Would they work? Chicken in a creamy Dijon sauce with potatoes, mushrooms, and slivered onions, it turned out, was lip-smacking when pulled out of the oven on a sheet pan, where the piquant mustard helps cut the sticky richness of bacon and chicken fat.

My mom’s soy sauce chicken stew (or marinade for grilled chicken) translated surprisingly well to the sheet pan, along with halved baby bok choy, whose leafy ends frizzled in the dry oven heat. Many, though not all, of the eventual recipes in the book follow this logic: If a beloved combination of chicken and other ingredients works great when cooked one way, maybe it can be rejiggered to work great on a sheet pan. I was not the only one with this inclination. When I asked a handful of food writers whose work I love if they would like to contribute their own sheet pan chicken recipe for the book, several offered a twist on a dish that’s dear to them, too. Like Leela Punyaratabandhu’s deliciously fish sauce–infused Thai Yellow Curry Chicken Thighs, a juicy and crisp adaptation on the saucier curry. Or Jenn de la Vega’s ode to tinola, a Filipino chicken and green papaya soup with healing moringa leaves. Or Louisa Shafia’s take on jujeh kabab, a Persian chicken kabab that’s traditionally grilled with cherry tomatoes on a stick (instead, in her recipe, they splatter all over the sheet pan into the chicken juice for the most umami pan sauce ever). And so on.

I got to play with ingredients that were totally new and incredible to me in the process—like red palm oil, thanks to Yewande Komolafe’s Roast Chicken with Crushed Fennel and Citrusy Red Palm Oil Dressing. And I got to experience the connections that other food writers drew between cuisines, like with Von Diaz’s Southeast Asian and Puerto Rican–inspired take on adobo chicken. All told, this project gave me the feeling of a community cook-off, where the dish du jour was sheet pan chicken. (Some of my favorite food memories—and foodie friends—were made while participating in local cook-offs, and you’d see a lot of wink-wink-nod-nods to foods of one’s heritage that no one would have been able to dream up but that person.)

Not all of the remixed classic dishes I attempted worked (ratatouille is a sheet pan “don’t,” I found). But the ones that did made me appreciate different aspects about the dish of origin—like cabbage in a version of Chinese Lion’s Head Meatballs—as well as realize that the best cooking method for anything has everything to do with who, what, and where you are. For instance, clay-pot cooking makes sense if you need your dinner to cook very slowly, perhaps in glowing embers (which is how you could prepare Chinese Lion’s Head Meatballs and cabbage—oh, and it’s typically made with pork!). That said, this is by no means to say that we should do away with traditional cooking methods altogether. There’s a time and a place for everything—and, believe it or not, in my family when I was growing up, the time to use the oven was only about once a year, on Thanksgiving.

So, for those who haven’t given sheet pan cooking a try, here are a few recipes that might make you give it a second thought. For those who can’t wait for a new way to toss it all in the oven and run, here are some ideas that are hopefully refreshing. And, because not everything plays nice in the oven, there are a couple sides to complement. Here are a few of my favorite recipes from Sheet Pan Chicken, which can be purchased here. —Cathy Erway

Paprika Chicken with Sweet Potatoes and a Crispy Kale Crown

Celery and Watermelon Radish Salad with Nuts and Dried Cherries