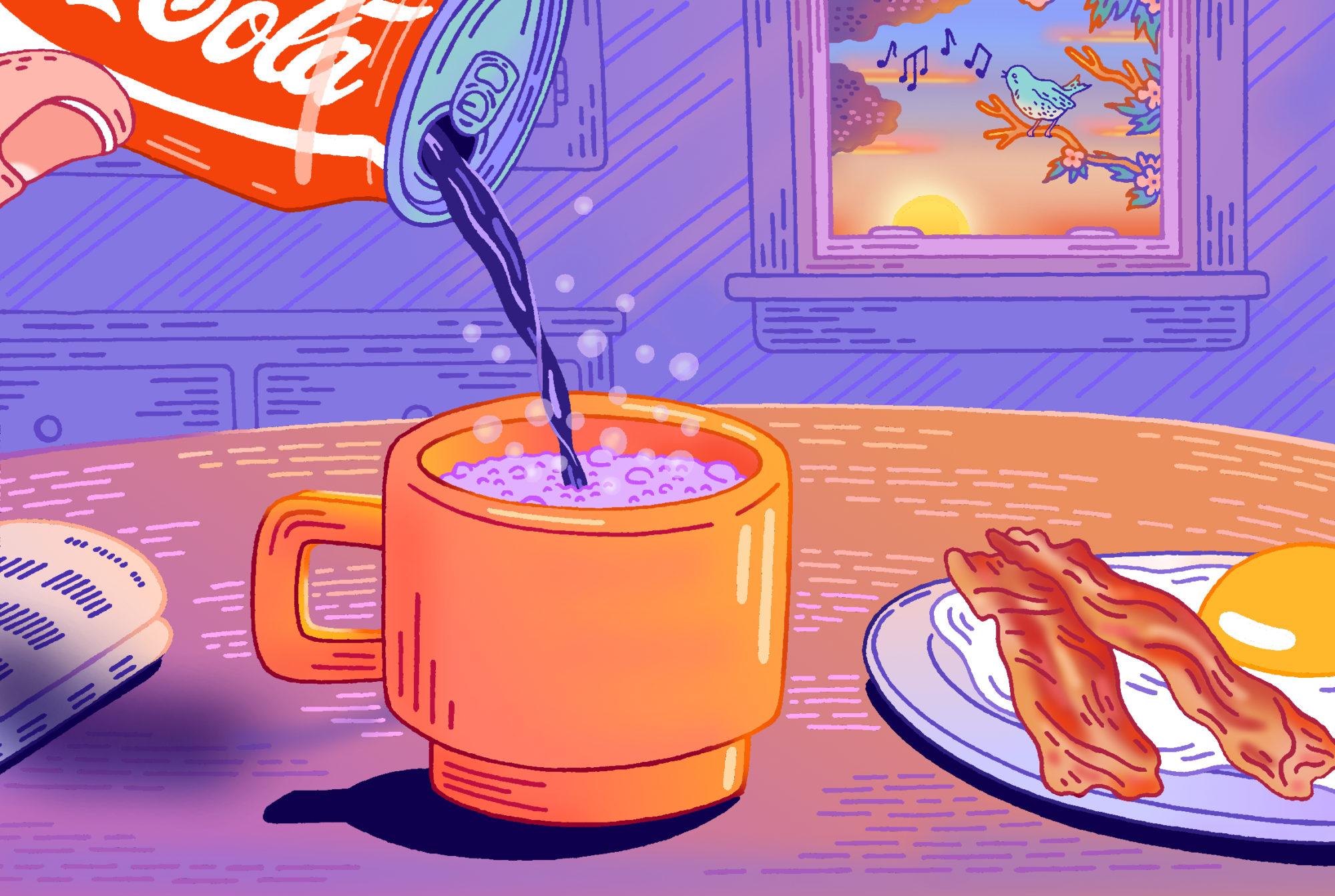 There was a time, before cold brew and the war on sugary sodas, when Coca-Cola had a spot at the breakfast table.

Joan Didion is a writer who needs Coke to start the day. The habit surfaced with the 2017 release of the documentary Joan Didion: The Center Will Not Hold and blindsided most fans of the famed essayist. Having grown notoriously tight-lipped regarding her private life, Didion let her guard down long enough to recount the morning routine she shared with her late husband, John Gregory Dunne. He would assume domestic duties: building a fire, whipping up breakfast, whisking their daughter off to school. Then and only then would Didion “get up, have a Coca-Cola, and start work.”

Although it may be dismissed as a writerly quirk, an extension of Didion’s icebox eccentricities (she would store stalled manuscripts in her freezer), the breakfast Coke is actually a longstanding Southern tradition. In many households South of the Mason-Dixon, Coke doesn’t stray far from toasty bowls of grits and steaming heaps of biscuits.

Historian Bartow J. Elmore speculates in Citizen Coke: The Making of Coca-Cola Capitalism that the early success of the breakfast Coke in the South can be owed to 90-something-degree days, which compelled early risers to forgo a piping-hot cup of coffee in favor of cooler ways to kickstart their mornings. While Coke may not be the most efficient medium for caffeine intake (an eight-ounce cup of coffee can contain anywhere from 95 to 165 milligrams of caffeine, while eight ounces of cola only packs about 24 to 46 milligrams, according to the Mayo Clinic), it certainly is more palatable on a hot day.

Thanks to this nostalgic foothold and some clever marketing, Coca-Cola spent the better part of the ’80s bringing a staunch Southern tradition to the masses, ensuring that Joan Didion wasn’t the only American starting her day with a swig of soda.

The revival of the breakfast Coke was kick-started in the mid-’80s, when Jolt Cola began advertising with the slogan “All the sugar and twice the caffeine.” The drink began to catch on as a replacement for a morning cup of coffee, and according to the Los Angeles Times, cans flew off store shelves faster than Jolt could restock them. Taking note of Jolt’s success, Coca-Cola realized that the coffee-drinking segment—about 50 percent of people in the United States in 1988, according to a coffee-and-sociology study conducted by NYU—was ripe for the picking. Enter: the “Coke in the Morning” campaign (launched in 1988), whose cornerstone was an earworm radio jingle that rebranded Coke from a decadent treat to ”a cool, refreshing drink to make me come alive” in the midst of bumper-to-bumper traffic. Securing Coke’s seat at the breakfast table was a “cross-merchandising” campaign that placed the product next to early-morning food items at convenience stores.

The “Coke in the Morning” campaign marked a new era for the soda company. In 1988, The New York Times reported that morning soda-drinking was on the rise, accounting for a whopping 12 percent of soft drink sales. In a 1989 article, the Los Angeles Times speculated that the sea change was part of a movement toward luxury and convenience, and that hot drinks like coffee and tea were better suited for agrarian (read: primitive) societies, in which ice production and soda manufacturing were inconceivable. The breakfast Coke was both efficient and indulgent, the signpost of a skyrocketing information society.

Fast-forward to the present day, and America’s crippling fear of sugar and rampant obsession with cold-brew coffee has all but sunk the breakfast Coke tradition and sapped sugar-based breakfast-item sales across the board. Between bottled water sales eclipsing soda sales for the first time in 2016 and cold-brew coffee sales ballooning from $2.6 million in 2012 to $38 million in 2017, Coke has been dealt its toughest hand yet with today’s consumer.

Unwilling to let tradition die or leave dollars on the table, breakfast bailouts have been attempted by a host of fast-food chains, including Sonic (99-cent soft drinks before 10 a.m.) and Steak ’n Shake (Coke and breakfast taco pairings). In the meantime, Coca-Cola has vied for breakfast dollars abroad to compensate for the waning American market, most notably through the release of the aptly named Coca-Cola Plus Coffee in Japan.

Sure, a Coke in the morning is a nutritionally reckless way to start your day. But in a world that often feels depleted of certainty and sweetness, sometimes a syrupy swig of a Coke is the best—and only—way to face another morning. Warren Buffet still swears by the breakfast Coke, crushing one every morning with a side of potato sticks. And really, who’s to judge the dietary choices of a man who could swim through his bank account Scrooge McDuck style? Certainly not I, a non-soda-drinker who isn’t fazed by a double-digit available balance.

Shannon Nico Shreibak is a Chicago-based writer, clumsy cyclist and dilettante baker. Her work has appeared in the Chicago Reader, The Takeout and beyond. Learn more about Shannon here.