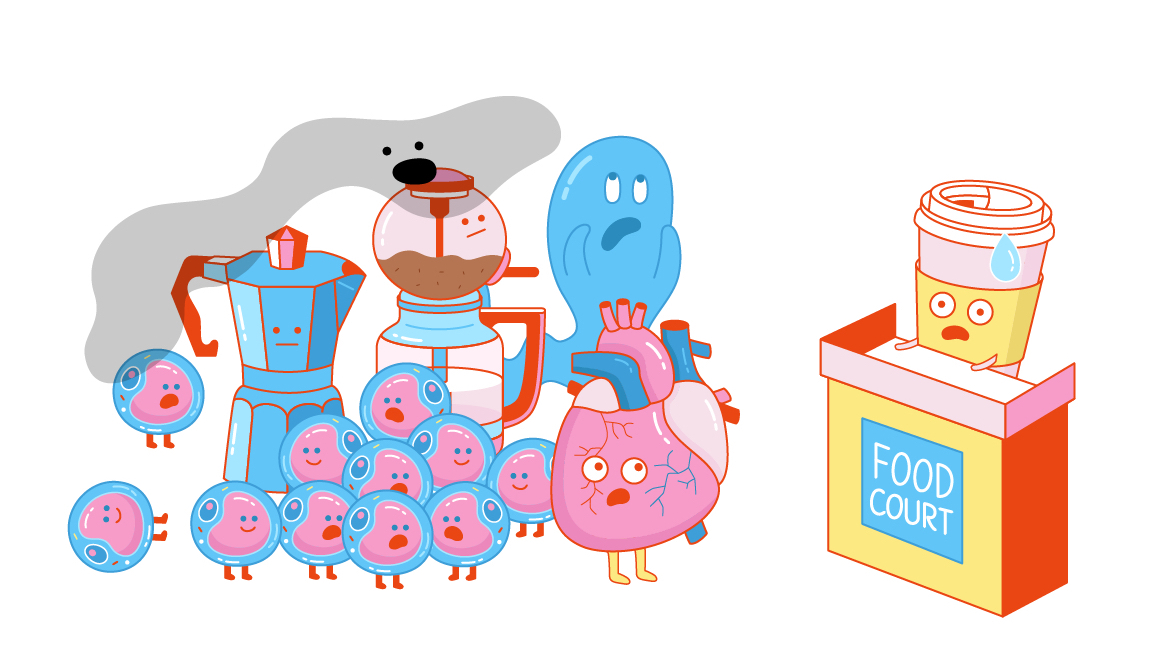 Does coffee give you heart disease? Does it cause anxiety? Does it make you live longer? We look back at some of the most questionable health claims about the drink.

Hunter S. Thompson drank coffee to help come down from the high of mescaline; writer Honore de Balzac drank a lot of coffee—aquarium-sized amounts—to fuel his creativity; many drunk characters in many midcentury movies guzzled mugs of black coffee to “sober up” before driving home.

Of course, in reality, no amount of coffee will negate the effects of drunkenness—or help you come down from tripping your ass off on a heavy hallucinogenic drug, or turn you into a Balzac-level genius—but it is hardly the only specious claim ever made about the health benefits or detriments of that sweet, sweet caffeinated elixir. We’ve been told coffee makes us die earlier; we’ve been told coffee makes us live longer; we’ve been told that women shouldn’t have any coffee whatsoever when they’re pregnant (studies suggest it’s OK for pregnant women to consume up to 300 milligrams of caffeine per day, or the equivalent of one to two cups of coffee).

Over the years, we’ve been sold—and to some degree we’ve believed—a lot of bunk coffee claims, and yet none of it has affected our intake: The majority of Americans drink at least one cup of coffee a day, a number that’s remained steady for at least the past 20 years. Which means we really must love the stuff, because some of the things we’ve been told are pretty terrifying! Here are some questions we’ve asked—and continue to ask—ourselves about coffee. Will Drinking Too Much Coffee Cause Heart Disease?

It was once believed that heavy coffee drinkers were more likely than non-coffee-drinkers to develop heart disease. The only problem with that logic was that it was based on studies that neglected to control for the fact that heavy coffee drinkers were also more likely than non-coffee-drinkers to be super into binge-drinking alcohol and chain smoking. It’s probably best not to drink 15 cups of coffee per day—just as it’s best not to binge-drink and chain-smoke, even if they’re both very fun—but the worst-case scenario is probably a hell of a case of the jitters. It’s not likely to lead to instant heart disease. Answer: maybe. One study conducted by researchers in the department of physiology at the College of Medicine at Soonchunhyang University in Korea suggests that caffeine intake facilitates lipolysis, which means the breakdown of fats and lipids by hydrolysis to release fatty acids, and also increases metabolic fat oxidation. Which is a fancy way of saying that caffeine intake helps burn fat. But your morning coffee shouldn’t be your only form of exercise. Unless you walk two miles to the coffee shop each morning, in which case: Screw that adult kickball league! Will Drinking Coffee Cause Cancer?

If there is a cancer risk associated with coffee, it’s got less to do with the beans and more to do with how they’re brewed. A recent study by the German Federal Institute for Risk Assessment observed the amount of elemental ions released into freshly brewed coffee by machine type. It found that the highest amount of leaching occurred with devices that use portafilters, which are the little basket-like components on espresso machines that hold the coffee grounds. The study found that machines that use portafilters leached a larger quantity of elemental ions than recommended by the Council of Europe. The study suggests that any health ramifications can be avoided by following a “careful rinsing routine.” So espresso drinkers beware: If you’re not vigilant about cleaning your machine, you might be exposing yourself to unsafe levels of heavy metals. Does Coffee Cause Anxiety?

One study showed that caffeine intake increases cortisol release in healthy young men and women, though it did note that cortisol responses to caffeine decrease with daily intake. Heightened cortisol levels have been linked with mood disorders such as depression and anxiety. So, yes: If you drink too much coffee, you may end up feeling anxious. And if you’re predisposed to feeling anxious, that fifth cup of coffee certainly won’t do you any favors.